Fishers Island is a botanically diverse island with a number of different habitat types supporting different plant communities. Nearly 1000 species of vascular plants were identified in a 2003 study of the island flora. The flora of Fishers Island was first documented by Hanmer and St. John in 1940 and 1941 respectively. Together, the two studies reported 563 species. The 2003 study greatly enlarged the numbers adding approximately 400 species to the earlier data.

According to the recent survey, twenty-one different fern species can be found on the island, many occurring in damp or wet habitats. In some of these areas, large glades of ferns carpet the forest floor. The fronds or leaves of a fern vary in size and shape according to species. Many species have differing morphology for the fertile and sterile fronds. Fertile leaves carry the spores for reproduction, usually on the underside of the leaf.

One of the common ferns on the island is the cinnamon fern (Osmunda cinnamomea). Early relatives of this fern and others of its group date back to the early Mesozoic, about 210 million years ago. This large fern is easily recognized in early spring as the fiddleheads emerge. They are densely coated with cinnamon-colored downy wool. (A word of caution—the cinnamon fern fiddlehead is not the edible species and is bitter, hairy and unpleasant to eat.) The hummingbird uses the wool to line its nest. The fertile frond is distinctive and is the first to appear. A bright green upon emergence, it soon turns to a cinnamon-brown. It is club-like in appearance and withers early. The sterile leaves are large, erect and arching, growing from a central rootstock. 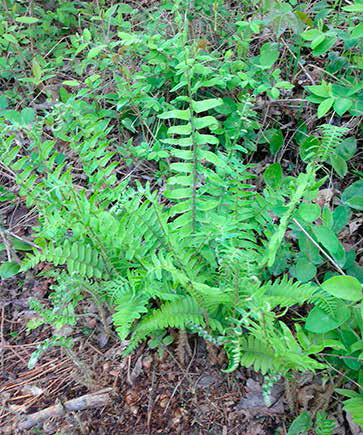 Another fern, somewhat less common on Fishers, is the Christmas fern (Polystichum acrostichoides). This is a handsome evergreen fern common on rocky shaded slopes. Fertile and sterile leaves are similar although the fertile leaves tend to be larger. These wither in winter while the sterile leaves remain evergreen throughout. This fern gets its name from the fact that it is green at Christmas as well as from the appearance of the individual leaflets. These are said to resemble a Christmas stocking and with a bit of imagination, one can see the likeness. Christmas fern can be found within the brickyard woods and along the Chocomount Trail.

One of the less common ferns on the island is the ebony spleenwort (Asplenium platyneuron). This is a fern of welldrained rocky soils. This small semi-evergreen fern is found at Fishers on roadside banks and along the Chocomount trail. It is a small fern averaging a little over a foot in height. It is recognized by its narrow, ladder-like leaves and blackish stalk. The fertile fronds remain erect and taper at both ends. The sterile fronds are shorter, spreading, and tend to lie flat on the ground.

New York fern (Thelypteris noveboracensis) is relatively common on Fishers Island. This fern forms large patches and can be seen in the Brickyard Woods in addition to other spots on the island. One way to distinguish the New York fern is that the fronds taper at both ends, or as many like to think of it, New Yorkers burn the candle at both ends. New York fern is quite delicate with thin light green fronds. It grows from a tuft in mixed woodlands and at the edge of swamps. Fertile leaves are larger, narrower and usually more upright. The spores are found on the underside of the leaves. 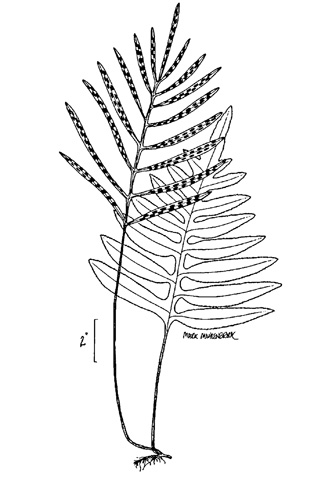 One of the most distinctive and handsome ferns on Fishers is the netted chain fern (Woodwardia aureolata). This fern is so named due to the chain-like pattern of veins found along the midrib of the underside of the leaf. The chain fern spreads by creeping rhizomes and often forms large colonies. It is a fern of moist, wet acid soils and on Fishers is seen in the Clay Point woods. It is a deciduous fern and the fronds are a waxy dark green. The fertile frond is sometimes mistaken for sensitive fern (Onoclea sensibilis) which it closely resembles. The fertile fronds are very narrow and contain rows of chainlike fruit dots.

As indicated, the sensitive fern, also known as the bead fern, can be confused with the netted chain fern. Sensitive fern is a plant of wet places and the edges of woods. The sterile leaves are tall and somewhat course and are light green in color. This is a deciduous perennial fern. The fertile fronds are shorter and upright and the spore cases are enclosed in small, beadlike segments. The fertile fronds start out as green leaves, but by late summer turn to a rich brown. Although essentially dead, the fertile fronds persist through the winter. Sensitive fern is named in part due to its susceptibility to frost and drought and it withers at the first frost. These are a few of the ferns that can be found at Fishers Island. Many can be seen from the trails on Museum property, so keep a lookout as you enjoy a walk in the woods.

“So what have we learned from studying the past and present flora of Fishers Island over a 100 year period? We have observed that the plant life of Fishers Island is dynamic, populations come and go, they increase and decrease in size from year to year. Natural forces such as hurricanes and northeasters, droughts and flooding, insect infestations, etc., can significantly alter the physical structure of ecosystems resulting in opportunities for plants to colonize new sites, and conversely, resulting in the loss of habitat for other species. But by far, the greatest single impact upon the plant life of Fishers Island during the past 100 years has been man. The irreversible destruction of habitat due to development and the alteration of natural wetland systems has resulted in significant changes in the island’s flora. Fortunately, outstanding examples of natural communities still remain on Fishers Island. About 45 species of rare, endangered, and threatened vascular plants occur on the island, making this site one of New York State’s most significant botanical hotspots.”