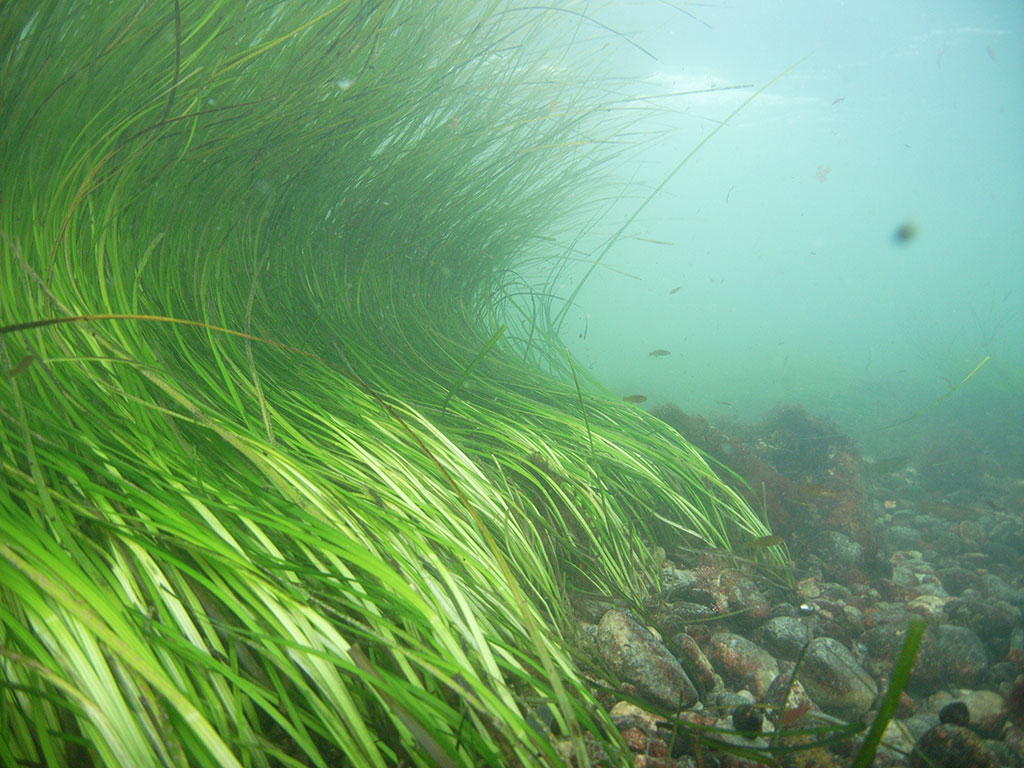 What Is Seagrass, and Why Should We Care About It?

Commonly mistaken for seaweed, seagrass is a flowering plant complete with roots, stems, and flowers that is adapted to life underwater. Globally, there are about 60 species of seagrass. The one most abundant in Long Island Sound and around Fishers Island is eelgrass (Zostera marina).

Found in depths up to 24 feet off the Island’s coastline, these eelgrass beds offer a number of high-value ecosystem services. They provide shelter and nursery habitat for species such as fish, lobster, shrimp and scallops. Eelgrass is a food source and foraging ground for marine mammals, birds, and sea turtles. With their root systems, seagrass meadows trap and stabilize sediments, helping to reduce coastal erosion. The long, dense blades of eelgrass further protect shorelines from erosion by dampening wave energy. Eelgrass improves water quality by extracting nitrogen and producing oxygen. Finally, seagrasses help to mitigate climate change by storing carbon, thus removing carbon dioxide from the atmosphere.

However, eelgrass and the invaluable services it provides are at risk. Seagrasses are under intense pressure globally, and this pressure is particularly acute in Long Island Sound. Historically, eelgrass was so abundant here that it was harvested for use as insulation and fertilizer, but today fewer than 2000 acres remain. A number of factors have caused this decline in the extent of eelgrass beds. Meadows are threatened by boating and dredging activity, which can literally scrape eelgrass off the ocean floor. When excess nitrogen from wastewater and fertilizers flows into the Sound, it fuels the growth of harmful algae that kill fish, threaten human health, and block the sunlight seagrasses need to complete photosynthesis; this toxic effect is called eutrophication. Sediment that washes into the water from coastal construction and erosion can bury eelgrass and create turbidity that also blocks sunlight, further hampering their survival. Finally, climate change is also a threat, both through rising water temperatures and extreme weather events that can produce wave energy damaging to the beds.

A New Coalition Emerges to Protect Seagrass in the Sound 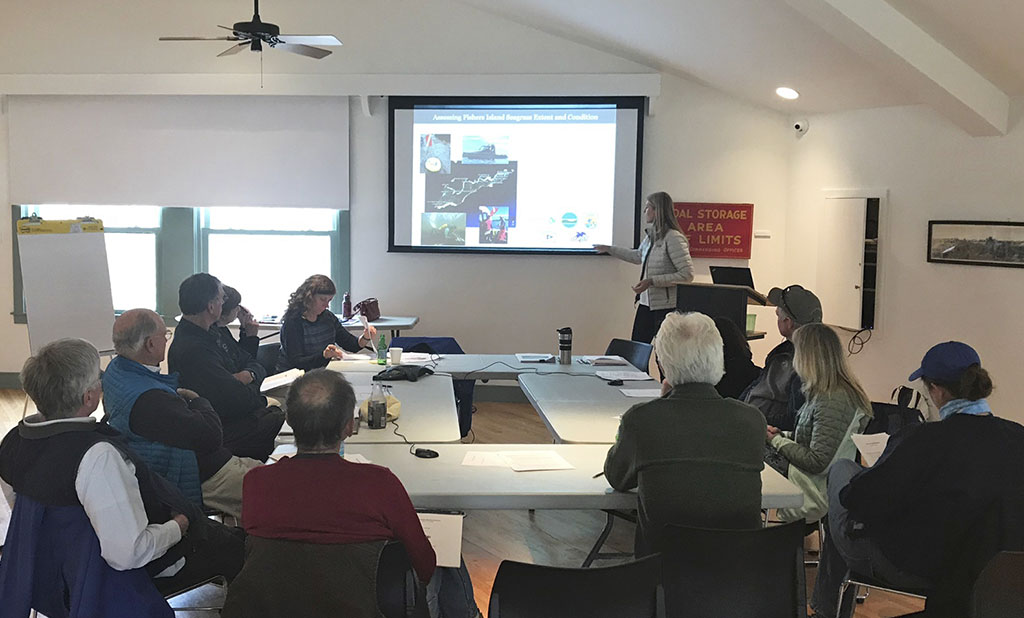 Given the many benefits of the plant to both the aquatic and human Fishers Island communities, the decline of seagrass is cause for concern. Recognizing the perils to this valued resource, the New York State Legislature established a Seagrass Task Force in 2006. In response to recommendations from the task force, the New York State Legislature passed the Seagrass Protection Act in 2012. This act calls for 1) the establishment of seagrass management areas (SMAs), 2) the development and implementation of management plans for the seagrass management areas, and 3) the consultation and creation of working relationships with relevant stakeholders in order to protect and manage the seagrass resource.

The waters around Fishers Island are the last stronghold for seagrass in Long Island Sound. While it may seem prevalent here, Fishers Island’s eelgrass meadows are also at risk – the most recent survey indicates a 14% decline between 2012 and 2017. Recognizing the critical role of seagrass as part of a larger conservation strategy for the Long Island Sound, The Nature Conservancy (TNC) began working with the Island community in 2015. They shared the latest research on the threats to eelgrass and began monitoring water temperatures at eelgrass sites around the Island. Today, TNC provides capacity building, technical, planning, and management support; the organization helps the community collaborate with the New York State Department of Environmental Conservation (NYSDEC) to identify management needs and opportunities to protect the island’s eelgrass meadows. 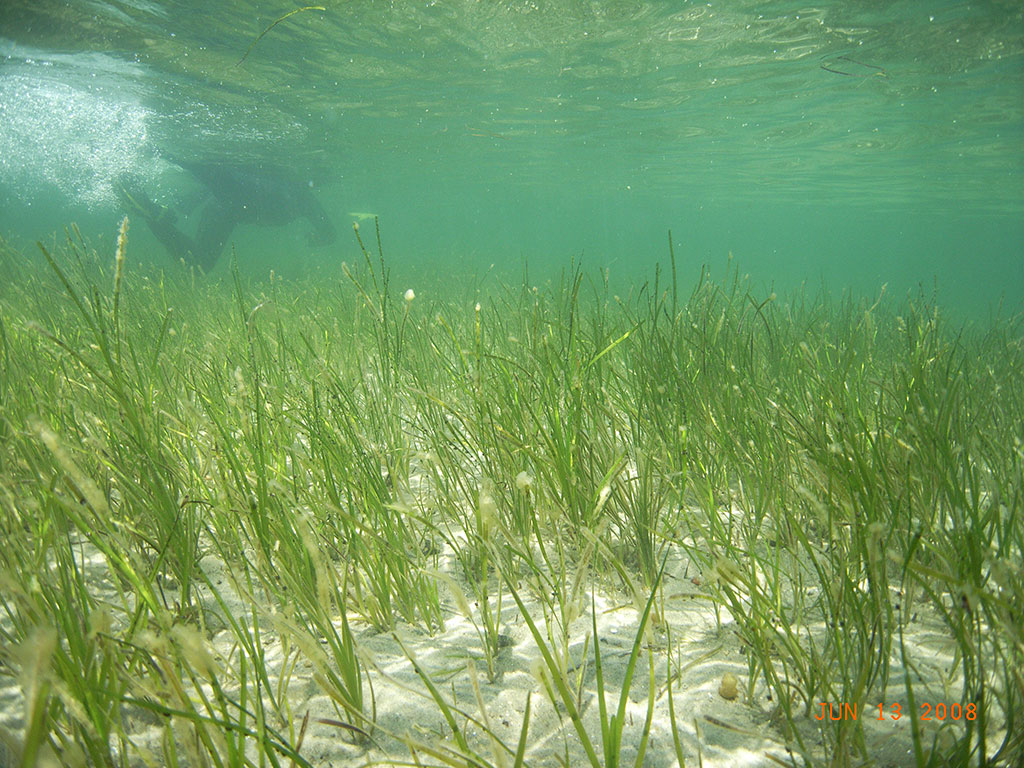 The goal of the Coalition is to establish a co-management process for the island’s seagrass meadows, one in which the Island community and the state would share seagrass management authority and responsibility. The stakeholder group has met three times to date (May 2018). Discussions in these meetings have revolved around how to implement the Seagrass Protection Act at Fishers Island and how to best organize the group. To better understand the Seagrass Protection Act and the resource its protecting, the coalition has invited guest speakers including Soren Dahl of the NYSDEC and Elizabeth Hornstein of the Peconic Estuary Program, and it has focused on identifying specific local threats to eelgrass. The group has also worked to clarify the group’s vision and to identify and secure funding for the coalition’s work.

Through continued discussion, joint fact-finding, monitoring, and information gathering, the FISM coalition plans to align community and state seagrass management goals. The coalition also plans to build a structure for participation and decision-making that is functional, collaborative, and inclusive. Future FISM coalition meetings will be posted on the community calendar, and community members are invited to attend, observe, and provide comments to inform the coalition’s work. 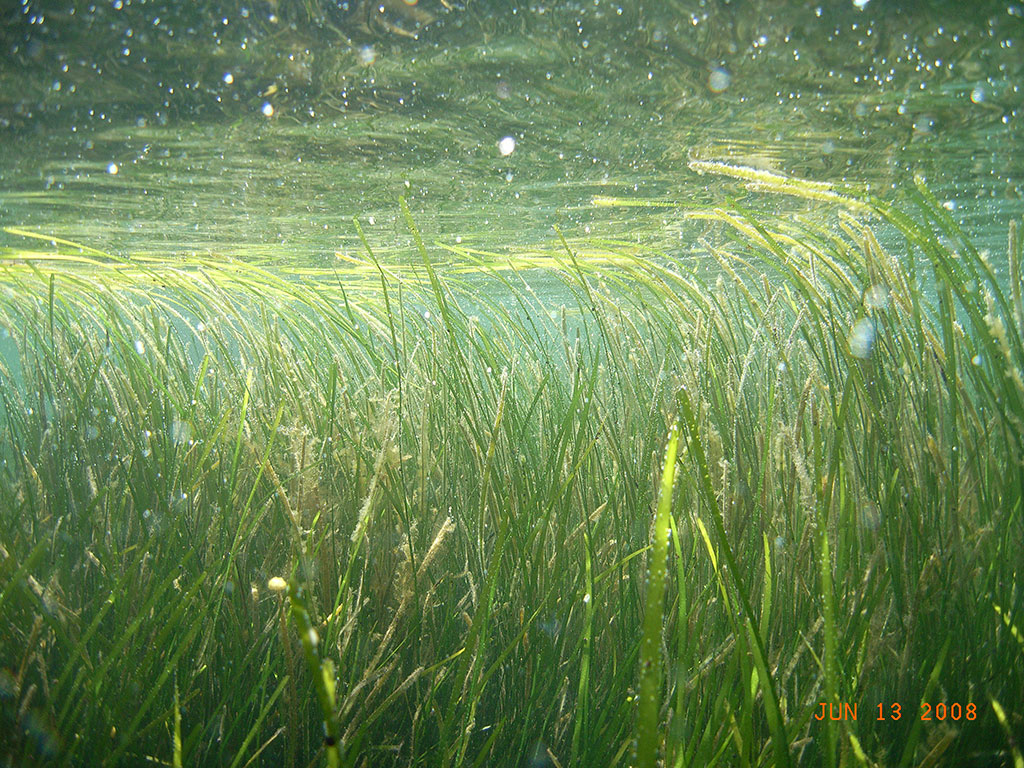 Since 2017, Chantal Collier of The Nature Conservancy, Elizabeth McCance of the H.L. Ferguson Museum, Justine Kibbe of the Fishers Island Conservancy, and Joe Woolston have worked together to launch the Fishers Island Seagrass Management (FISM) coalition. From the outset, coalition members recognized the need for steady professional support to advance and sustain the work of the coalition. The coalition identified the need for a dedicated coordinator to facilitate the FISM collaborative processes and further the information-gathering and joint fact-finding efforts. Additionally, coalition members would like to establish a citizen monitoring program to gather data on the human impacts on the Island’s seagrass beds.

Securing funding for conservation work is always a challenge, especially in the public grants arena, and the first grant proposal, written by The Nature Conservancy to support the FISM coalition, was not selected for an award. However, the New York Conservation Partnership Program presented an opportunity for the H.L. Ferguson Museum, as a land trust, to apply for a conservation catalyst grant, which seemed to fit the coalition’s needs. On Tuesday, April 24th, the H.L. Ferguson Museum was awarded a $40,000 grant to support the work of the FISM coalition. The Museum was one of 51 land trusts to receive a grant in 2018.

Next, the coalition will draft a job description and start looking for a coordinator to facilitate the group’s work. Because only a portion of the funding requested was awarded, this grant will not cover all the monitoring work the group desires. The Nature Conservancy is already working, however, on a new grant proposal to submit to the Long Island Sound Futures Fund, and the coalition will continue to be on the lookout for other funding sources. Fishers Island is uniquely poised to take leadership in this critical conservation work. The coordinated efforts of the FISM coalition offer hope for the survival of eelgrass and the enduring health of the Long Island Sound.