Island climate; plants, animals, and folks around the docks

Docks on Silver Eel Cove with Pump House in background, circa 2001.

“Silver Eel Cove” (where the Fishers Island ferries dock) was a pond before 1898. The land was purchased by the United States Government, the Fort was begun, and the present entrance to the cove was opened to the waters of Fishers Island Sound. A new environment was created and new forms of living creatures would henceforth be found in Silver Eel Cove.

The water temperatures of the surrounding sea have a moderating effect on the air temperature of Fishers Island. Air temperatures on the Island in winter are 5-10 degrees warmer than those on the nearby mainland. And in the summer it is 5-10 or more degrees cooler. This is because water has more “thermal inertia” than air; for example, water temperatures in Silver Eel Cove in 1997 varied from a low of 41 during January to a high of 72 in September (a range of 31 degrees Fahrenheit), whereas the air temperature varied from 6 degrees in January to a high of 88 on July 15, a range of 82 degrees. It’s great after being in New London on a hot summer day with 90-degree temperatures to return to the Island’s 80 degrees. 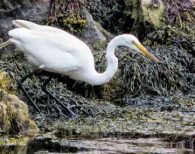 While you are on the dock, look at the seaweed or algae growing on the pilings. There are three main kinds of algae: the green, the brown, and the red, all of which grow in Silver Eel Cove. Attached to the pilings are at least three kinds of brown algae. One kind is kelp, which comes in long greenishbrown strips. Botanists call is Laminaria. There are two smaller kinds with knotted fronds: the rockweeds, one of which is Fusus vesiculosus and the other Ascophyllum nodosum. The “knots” are gas-filled floats which keep the fronds up in the sunlight despite the rise and fall of the tide. Among the red algae is an edible one called “dulse,” also known as Rhodymenia palmata. It is reddish and shaped somewhat like a hand with projecting fingerlike fronds. Among the greens are other edible algae called sea lettuce or Ulva lactuca. All of these algae must be attached by a “holdfast” to something solid like a piling or a rock. Other places to find them are on the rocks northwest of Silver Eel and at Race Point.

In September and October, people with rods, bait, and other gear appear on the docks, for it is fishing time. They come to catch tinker mackerel, snapper blues, butterfish, flounder, fluke, weakfish, eels, porgies, and others. Schools of fish fishermen call “bait fish” come into Silver Eel Cove, sometimes followed by the bigger fish that the fishermen want to catch. The most numerous of the bait fish are the Atlantic silversides. At times squid appear in large numbers. Striped bass lurk in the waters under the dock, as Bob Evans discovered when he lived nearby and scanned the water at night. Lobsters also live in the Cove, and have on occasion been caught by inventive fishermen.

Birds that come into Silver Eel Cove during the winter months are double-crested cormorants, red-breasted mergan mergansers, mallards, black ducks, gulls, and others. On a cold winter day in the early 1960s, with an earth science class, I watched as a herring gull dove and killed a horned grebe. One of the class members raced to the spot and waded into the water to retrieve the grebe. It is now a specimen in the Museum. A fishing bird which may be seen during any month of the year at the cove is the kingfisher; it is often perched on a dock, boat, or other spot where it can see fish in the cove. This bird sometimes alerts us to its presence by its rattling call.

Another fishing bird present in large numbers during July and August is the common tern, which does not arrive on the Island until early May, back from South America. Wilfred Sinclair, an early manager of the Ferry District, once said, “I know that it is summer when I see a tern.” In late July, August, and early September the common terns perch on the pilings and docks, make flights over the water, hover briefly, then dive to catch fish. Often fish are brought back to young perched on a dock. The young terns were probably hatched on Great Gull Island, and flew to Silver Eel Cove with their parents. If you watch terns as they hover and dive, it is easy to see when they are successful or not.

Other birds nest around Silver Eel Cove. Barn swallows swoop over the water and under the dock where they nest; the young must be able to fly when they leave the nest for the first time. Starlings nest in holes in the pilings. Bob Evans found a Green heron’s nest hidden between pilings near the ramp at the south end of the Cove. During the early 1990s, a flicker nest was found in a cavity in a stump along the road leaving the ferry dock. In a tree next to the former headquarters building where the Youth Fellowship now is, a family of crows had their nest. Crows are most secretive at nesting time and nests are not often found. In the loft of the building where Harold Cook now has his shop, rock doves (or common pigeons) nested for many years. Swans have nested in the wrack on the little beach at the entrance to the harbor.

The Razor-billed auk (Alca torda) is a colonial sea bird that comes to shore only to breed. Lee Ferguson and Ed Horning saw one in Silver Eel cove in the 1950s, the last recorded sighting on Fishers Island, other than remains that had washed ashore.

It is always possible that you will see unusual animals around the docks. One day Bob Evans saw a river otter sitting under the dock at the southernmost end of the cove. Bob watched the otter dive and catch a fish, return to its spot, and eat the fish. Under this same dock during a winter in the 1950s, Lee Ferguson one day pointed out a bird that I had never before seen. It was one of the northern members of the alcid family, a razor-billed auk. The poor bird had gotten into a patch of oil. Lee said that he had seen another oiled auk in the same place before seeing this one. A garter snake was once seen swimming across the Cove in the late 1980s. Charles Stepanek once found a dead gray fox in the area.

As you leave Silver Eel Cove, note a grove of exotic elms just east of the road. They are Turkestan elms, Ulmus pumila. There were probably planted around 1910-1920, as the fort was being first developed. In September and October these non-native trees come alive with bird life. At that time, yellowbellied sapsuckers come from the north, seeking food. This member of the woodpecker family perches on the side of a tree and drills 10 or more holes in a row across the trunk. They are often seen on apple and other fruit trees, but this elm is favored. The sapsucker dines on the sap, and insects attracted to the sap, but so do other birds including such migrating warblers as the black-throated blue, the yellow-rumped, and the Cape May warbler (a very rare one). Hummingbirds have been seen partaking of the sap. Insects such as flies, wasps, bees and butterflies sip at the sap wells of elms. Every autumn I look here to see the first of the sapsuckers. Sometimes I hear a catlike “meow.” It is the sapsucker.

Editor’s note: The grove of Turkestan, or Siberian Elms referred to in the last paragraph is located on the Kibbe property across from the Lamb property. The traffic pattern to the ferry was then clockwise, so the elms were then on your left as you exited the ferry area.