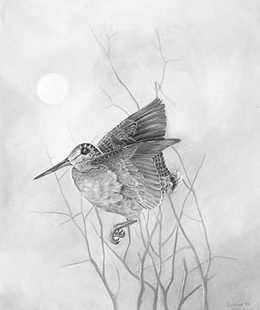 The American woodcock (Scolopax minor) is a breeding bird on Fishers Island although it is seldom seen due to its reclusive habits. The bird belongs in the family Scolopacidae, which encompasses the shorebirds. It is probably the only member of the family that spends its time in brushy fields and woodlands rather than along the coastal beaches and rocky shores.

The woodcock is distinguished by its long tapering bill which reaches some 65 mm (approximately 2.5 inches) in length. The bird is well-camouflaged in the woods as the plumage on its upper parts is a mix of browns, grays and blacks, blending well with fallen leaves. Three black bands cross its crown descending toward the back. The underparts are a more uniform cinnamon-brown in color. The woodcock has large eyes which are set fairly far back on its head. Overall, it has a rather plump body with a short dark tail and stocky legs. Although the newly hatched chicks have short bills at first, by the time they are a few days old, they resemble small fuzzy versions of their parents. These chicks are precocial and develop rapidly in comparison to many other birds. By the age of two weeks, they are capable of short flights and by a little over three weeks are nearly full-grown and able to fly.

If you have ever stumbled upon the woodcock during its courtship rituals, you have been treated to a spectacular display. The display takes place in a clearing or patch of field often near a stream or wetland. As described by Bent* the male woodcock walks about “producing at intervals of a few seconds two very different notes – a loud rasping, emphatic zeeip and a soft guttural note like the croak of a frog. Suddenly he rises, and flies off at a rising angle, circling higher and higher, in increasing spirals until he looks like a mere speck in the sky, mounting to a height of 200 or 300 feet; during the upward flight he whistles continuously, twittering musical notes like twitter, itter, itter, itter, repeated without a break. Then comes his true love song – a loud, musical three-syllable note uttered three times with only a slight interval between the outbursts as the bird flutters downward, circling, zigzagging down to the ground.” This amazing performance is repeated many times over. The ritual takes place at dusk shortly after sunset and may continue well into the night, particularly on bright moonlit nights.

Woodcocks spend the winter well to the south of us, but are one of the earliest birds to return. During mild winters, they are often seen as early as late January and February. They feed nearly exclusively on earthworms and have been known to consume more than their own weight in a 24 hour period. The woodcock is able to move the tip of its bill independently and thus can probe the soil and grasp earthworms and insects.

One of the reasons that woodcock are seldom seen is that they are crepuscular, meaning that they are active primarily at dawn and dusk. During daylight they tend to remain still and fly only when disturbed. As it rises in flight, the woodcock usually emits a distinctive whistling sound.

Over the years woodcock numbers have fluctuated widely. A late freeze can decimate populations if food resources become frozen in the ground. Severe weather in their wintering grounds, over-harvesting, habitat loss, and pesticide use (particularly DDT which is fortunately no longer used in the USA) are all factors that have negatively affected the numbers for this species. Fortunately, many of the Museum Land Trust properties contain excellent habitat for the woodcock, thus it is likely that this species will continue to be a breeding bird on the island.