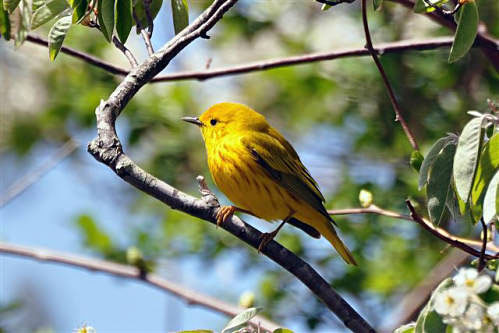 The month of May brings with it the assurance that spring is fully underway. The landscape is fresh and green and the woodland wildflowers make their appearance, capitalizing on the sunlight that filters to the forest floor. Insects, some more welcomed than others, reappear. Timed with the emergence of insects and a consequent increase in food supply, the spring bird migration is at its peak. This time of year is anticipated with fervor by birders because the wood warblers will be heading north brightly decked in the vibrant colors of their breeding plumages.

The wood warblers, family Parulidae, number approximately 120 species. About 30 to 35 of these pass through Fishers Island during migration. Some of these remain here to breed. The family Parulidae is a New World family and the common name, “wood warbler” is somewhat of a misnomer as this family bears no relationship to the Old World warbler family, Sylviidae. Furthermore, they cannot be said to warble and generally have rather thin, weak voices. What they lack in song, however, they make up for in beauty. The bright plumages of the wood warblers have inspired Roger Tory Peterson to refer to them as the “sprightly ‘butterflies’ of the bird world.”

Wood warblers are small birds, averaging about five inches, with slender, pointed bills. They feed primarily on insects, although some will supplement their diet with berries and seeds. Warblers capture their insect food in a variety of ways. Some are gleaners, taking insects from the backs of leaves or bark crevices. Others flit from branch to branch gathering insects as they move. A few species of warblers take insects on the wing. 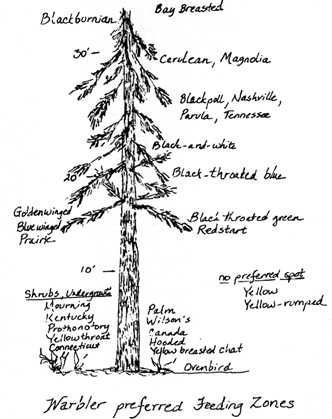 Warblers migrate by night and during the migratory season spend their days in the woods moving from tree to tree. They are active birds and seem to feed constantly. The location of activity can be diagnostic when one is attempting to identify a warbler as it darts among leaves and branches. Most of these birds have preferred feeding zones. For example, the Bay-breasted and Blackburnian warblers feed and move among tree tops. In the mid-zone of the canopy trees, the Tennessee, Black and white, and Black-throated blue warblers can be found. The Kentucky warbler, Palm, and Common yellowthroat can be spotted among shrubs and undergrowth. Because of this zonation, many warbler species can coexist in a single tree, each finding its own special niche. As many as five to six species can thus exploit what appears to be a single food source.

Wood warblers are found in a wide range of habitats. Some travel to the coniferous forests of northern Maine and Canada to breed and raise their young. Others prefer deciduous woodlands such as those found on Fishers Island. Many warblers remain in the tropics and inhabit epiphyte-laden forests.

Wood warblers generally build cup-shaped nests in trees or shrubs. They lay from two to six eggs which are white, speckled with brown. Nest building and incubation are performed by the female; however, both parents care for the young.

These fast-moving, brightly colored birds are a delight to the spring bird watcher, but they can cause grief to that same enthusiast in the fall. By then, the bright feathers have molted and have been replaced, in many cases, by a dull, olive-green plumage. The birds are no longer easy to distinguish and it takes an expert eye to make a positive identification. The term “confusing fall warblers” has made its way into bird field guides for good reason!

Some of the species commonly sighted at Fishers Island are the Yellow warbler, Yellow-rumped warbler, Black-and-white warbler, Common yellowthroat, and American redstart. The Yellow warbler is extremely common at Fishers and is one of the island’s breeding birds. As its name implies, this is a bright yellow bird with a slightly olive-tinged back. The male has fine chestnut streaks on the breast. The nest of the yellow warbler is a woven cup made of bark, plant fibers, and down. The female lays four to five eggs. Cowbirds have been known to lay eggs in the nest of a yellow warbler. Often, the female warbler will build a new nest layer over the unwanted egg. Nests have been found with several layers, each containing a cowbird egg.

If you are among those who delight in spring warbler watching, a walk along the Brickyard and Clay Point Trails is almost certain to be rewarding. Before venturing out, you may want to stop by the Museum to get a close-up look at some of the warblers that visit or breed on Fishers.