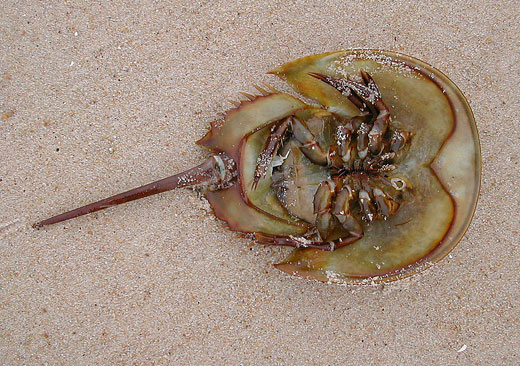 – one of the oldest creatures still living today

During June, a careful look at some of the beaches on the north side of Fishers Island will reveal numerous tiny exoskeletons of one of the oldest creatures still living today, the Horseshoe Crab (Limulus polyphemus). Fossils of these interesting creatures have been dated at 360 million years old. They evolved in the shallow seas of the Paleozoic Era, 540-248 million years ago. During the Mezozoic Era, which began about 200 million years ago, dinosaurs roamed much of North America. At the end of this era, a major extinction of the dinosaurs and about half of the planet’s marine invertebrates occurred. Incredibly, the Horseshoe Crab survived this time of change and the many subsequent changes on earth and still survives today.

Along the Atlantic coast, horseshoe crabs are most abundant between Virginia and New Jersey; therefore Fishers Island is at the northern portion of their range. The horseshoe crab is a bottom-dwelling organism that belongs to the large group of invertebrates (animals without backbones) called Arthropods. This group also includes lobsters, crabs, insects, spiders, and scorpions. Even though it looks crab-like, with a hard shell and claws, the horseshoe crab is more closely related to spiders, ticks and scorpions than to “true” crabs. Within the diversity of arthropods, horseshoe crabs have their own class called “Merostomata,” meaning “legs attached to the mouth.”

The body of a horseshoe crab is divided into three parts: the prosoma, opisthosoma and telson, or tail. The prosoma is the front part of the horseshoe crab and combines the head and thorax under a hard shell. The opisthosoma is attached to the prosoma with a hinge. The top or dorsal surface of the shell has ridges and depressions. These are locations where muscles are attached to the inside of the shell. Two large compound eyes are located on the prosoma, with other light receptors scattered all over the body. 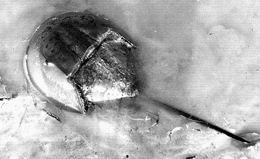 Horseshoe crabs spend most of their time in shallow coastal areas, resting or burrowing through the sediments in search of clams and worms, their preferred food. In locales where the water remains warm, horseshoe crabs are active throughout the year. In cold climates, the crabs bury themselves in mud and wait out winter. As the days become longer in spring, horseshoe crabs head for shallow waters to their spawning grounds. Horseshoe crabs lay their eggs in the intertidal zone of sandy beaches. Juvenile horseshoe crabs generally spend their first and second summer on the intertidal flats feeding before the daytime low tide and burrowing in the sand for the remainder of the day. As they grow, young crabs move away from the flats into deeper water. For the horseshoe crab to grow larger, it must molt and shed its shell. By the end of its first year, the crab will have molted several times, but will still be small, approximately 1/2″ wide. Horseshoe crabs initially molt an average of three or four times a year. By year three or four, it will shed its shell only once a year, usually during July or August. Once they reach maturity (around ages 8 to 9 for males and 10 or 11 for females), it is believed that horseshoe crabs no longer molt.

The horseshoe crab is most active at night, a strategy developed to avoid predation. They feed and spawn under the cover of darkness, thus one will likely find many more crabs on shore at night than during the day. A greater threat than most of its natural predators is overfishing. For many decades up until the 1980s, horseshoe crabs numbers along the Atlantic coast remained relatively constant. However, a decline in horseshoe crab abundance has been observed and attributed in part to an increase in demand for the crabs as bait for the eel and whelk fisheries. Scientists and wildlife managers are concerned that declining horseshoe crab populations may adversely affect shorebirds because horseshoe crab eggs are their primary food resource along the coastal flyway. New fishing regulations have been adopted that hopefully will provide protection for this living fossil.