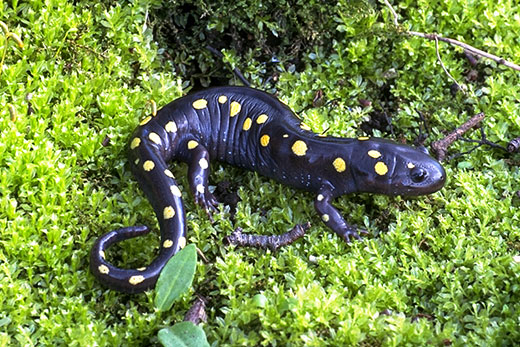 During the first warm rainy nights in late winter or early spring, a ritual occurs throughout the woodlands of the northeast, including Fishers Island. This is the return of amphibian species to their breeding pools. Typically, the breeding areas are “vernal pools,” wetlands that are receiving much attention due to well-publicized accounts of the decline in amphibian species. A vernal pool is a seasonal or permanent body of water in a defined basin or depression that lacks a fish population and supports or is capable of supporting the breeding and development of amphibian or invertebrate species. True vernal pools have neither an inlet nor an outlet and often dry out by mid to late summer. These ephemeral wetlands are now recognized as habitats that support unique biological communities, especially with respect to amphibians and invertebrates. Many other wildlife species including reptiles, birds, and mammals, although not dependent upon these habitats, consistently utilize them for functions such as resting, shelter, and feeding. Species that are dependent upon the pools for successful breeding are referred to as “obligate” vernal pool species and include Mole salamanders (so named for the fact that most of its life is spent underground), Wood frogs and Fairy shrimp. Obligate vernal pool species known to be present at Fishers are the Spotted salamander (Ambystoma maculatum) and the Wood frog (Rana sylvatica).

Vernal pool species spend most of their adult life in dry uplands, returning annually to the pools in order to breed. Once eggs are laid, the adults leave the pools. The eggs hatch and the larvae develop to emerge from the pool as juveniles. This process can take several weeks to several months depending upon the species. The adult amphibians remain faithful to their breeding pools, thus land development in close proximity to a vernal pool can have dire consequences upon amphibian populations. Roadways can cut off travel paths, sometimes preventing adults from reaching their breeding pools.

The Spotted salamander is a large salamander that can reach up to 6 to 8 inches in length. Adults are black, bluish black or gray in color with two rows of round yellow spots running lengthwise down the back from the eyes to the tail tip. The rows of spots may be irregular or straight. Larvae are olive green above, lighter colored below, and have no strong markings except near the tail tip. They also have bushy gills. Newly metamorphosed Spotted salamanders have light bellies and smaller dorsal spots. Spotted salamanders are secretive salamanders, which is why they are infrequently seen. Most of their time is spent underground in burrows of other animals or in crevices under logs or rocks.

With this species, courtship, breeding, and egg-laying all occur underwater. Females lay their eggs in the water, in clumps or masses, and may deposit over 300 eggs in one mass. These globular masses of eggs are covered with a jelly-like coating which may be clear or white and are usually attached to twigs in the pond. The aquatic larvae hatch in about 4-7 weeks and complete metamorphosis during the summer. Spotted salamanders may live for over 20 years. 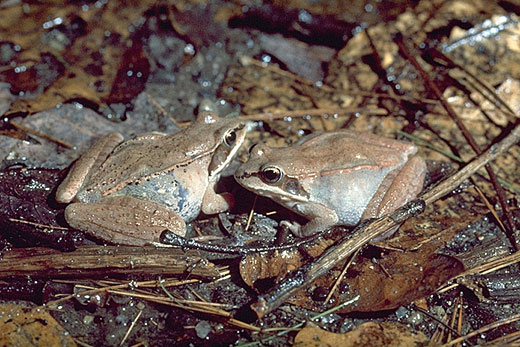 The Wood frog is a medium-sized frog that has a dark, mask-like patch extending backwards from its eyes. Wood frogs are typically brown in color, but can range from shades of reddish-brown to almost black. As the name implies, this frog is not an animal of ponds and streams, but one which spends its life in the woodlands and vegetated wetlands. In early spring, shortly after emerging from its winter dormancy, the Wood frog makes its way to vernal pools for breeding. The males begin their noisy, duck-like quacking chorus which persists throughout the breeding season when the temperature is above 40ºF. After breeding, females deposit large, gelatinous globular masses of up to 3,000 eggs. These masses are attached to aquatic vegetation and are often laid communally. The eggs hatch within three weeks and tadpoles transform within six to nine weeks. After mating and egg laying, the wood frogs leave the vernal pools to spend the rest of the year in the adjacent uplands. In winter, Wood frogs have a unique ability to survive the freezing of their body tissues. World-wide there are only a few species of vertebrates that can tolerate freezing.

Many of the vernal pools on Fishers are on Land Trust property. This ensures that these interesting amphibian species will continue to have protected habitat on our island.