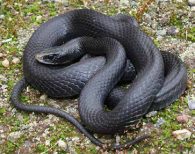 When you walk on Fishers Island during the summer months, you’re likely to encounter a snake or two in the fields or open woodlands. Turn over a few rocks, and you might find a few more. You’ll probably get no more than the briefest glimpse of these reptiles, as they slither away quickly, but it’s not hard to identify them. Be reassured: all four of the species on Fishers are harmless.

Our most striking serpentine resident (no pun intended) is the Northern Black Racer (Coluber c. constrictor). Adult individuals are a solid satiny black with a white chin, and they’re usually three to four feet long—though specimens of up to six feet have been recorded. The young hatch at 11 inches and are markedly different in appearance from the adults; they have a gray to grayish-brown background color with a dorsal pattern of darker blotches edged in dark gray or black. These markings fade as they mature and begin to disappear by the time they’re about 18 inches long.

Racers hunt during the day, and they’re often observed moving through vegetation with head raised above the ground, though it’s most likely that you’ll glimpse a Racer moving rapidly away from you. They emerge from hibernation sometime in March and remain active though much of October. They are diurnal, so they remain under cover at night and come out to bask when the sun moves higher in the sky. When they’ve warmed up sufficiently, usually by about 9:00 am, they begin to hunt. Their activity on a given day is dictated by the regulation of their body temperature, which is dependent on the weather. A range in the low 90s is optimal, so in the spring they move about in the middle of the day, on cloudy days they do very little, and on hot summer days they’re active in the morning and late afternoon. They’re excellent climbers and swimmers; a Racer has been spotted swimming across Darby Cove.

While the species prefers to hunt in lightly wooded areas and meadows, these beautiful snakes can often be found under large sheets of plywood, metal or piles of debris, which they use for cover overnight. The speed at which they disappear when discovered is startling (and a good indicator of how they earned their name). They’ve been clocked at 5.6 kilometers per hour—by comparison, a human walks at about 5 km/h. It has been reported that when the snake is cornered, it will coil, raise its head with mouth open, vibrate its tail much like a rattlesnake, and then attempt multiple strikes and bites. This predator-discouraging behavior has never, however, been reported on Fishers.

Northern black racers rely mostly on sight to locate and capture their prey. They have a widely varied diet of small mammals, snakes and snakes’ eggs, frogs, salamanders, small turtles and their eggs, birds (and eggs), and insects, and at times they are cannibalistic. A racer can detect a cricket at over 50 yards away and is capable of seeing larger prey at greater distances. The snake crawls rapidly after its prey, seizes it in its mouth, and swallows it whole. Contrary to its specific name, C. c. constrictor does not constrict.

Racers on Fishers breed between May and June and lay clutches of eggs under stones, rotting logs and stumps, in mulch piles and shallow holes in the sand, and under leaf debris. The elliptically-shaped eggs are one and a quarter inches long and usually number about 12 per clutch. They have a pebbly granular surface, making them easy to identify even after the hatchlings are gone. They hatch in late summer and, because of their size, are subject to extensive predation from large birds, feral cats, dogs, and coyotes. The adults also fall victim to some of these predators, and automobiles and pesticides are further threats. Surviving all this, they live to an age of about 10 years in the wild. Little data is available about their captive life span, as these snakes don’t make good pets. They are nasty and nervous and generally refuse any kind of food. It has been said that they refuse to eat anything but their keeper’s hand.

The snake you’re most likely to encounter when you’re out walking on Fishers Island is the Eastern Garter Snake (Thamnophis s. sirtalis). They are present in every habitat on the island, from gardens to swamps to open woodlands. Their sedentary behavior makes these snakes easy to detect and observe, and even when startled, they don’t go far. If you wait a few moments, the slothful Garter will probably reappear. This is also the snake most likely to be spotted crossing the road at night. They’re active from March through the beginning of November, and the young, which have the same marking as the adults, are born in August.

Garter snakes are medium sized and fairly heavy bodied. Their pattern consists of a medial stripe and two lateral stripes—all yellow—on a background that varies from dark green to olive brown to black. They are usually around 20 inches in length, though individuals more than four feet long have been collected. The tail is approximately one fifth of the total body length.

When you’re lucky enough to have one living around your house or in your garden, it is apparent that a Garter follows a regular daily schedule. He begins the day basking to raise his body temperature, and then he goes on the hunt. Garter snakes have a range of up to two acres in diameter and move only short distances each day. They often leave snake skins near rough objects when they shed.

These snakes feed on frogs, worms, salamanders and insects. If you follow the distressed call of a frog near a pond, you can often find a garter snake attempting to swallow the unlucky anuran. These snakes in turn have many predators, one of which is the Northern Black Racer. Garter snakes are also hunted by cats, dogs, coyotes, owls, hawks, and raccoons, and they’re often done in by automobiles. They are most vulnerable when they are neonates, just born, 7 to 9 inches in length. Barring predation, their life span is about eight years.

Breeding occurs in April, when they first emerge from hibernation, and the male follows a sex pheromone trail secreted by the female. When more than one male catches the scent and pursues the same female, the competition can result in a “ball” of snakes as they attempt to mate, which is reported to be quite a sight. At all times these snakes are communal, and turning over a rock will often reveal several individuals.

Though some garter snakes become motionless when they’re discovered, most attempt to flee. If escape is impossible, they may resort to aggressive behavior. The snake will flatten its head and body, flare its lips to show its teeth, and then strike violently. It will hold on and chew. Garter snakes do have a weak venom in their saliva, and a bite can cause a local reaction; swelling and edema have been reported at the site. This author has been bitten several times and never noticed any ill effects, but it’s probably best to leave the snake alone and enjoy your observations from a respectful distance.

The Snakes of Fishers Island – Part 2, covering the Eastern Ribbon Snake (Thamnophis s. sauritus) and the Northern Ring-necked Snake (Diadophis punctatus edwardsi), will be published in a future issue of the HLFM Newsletter.