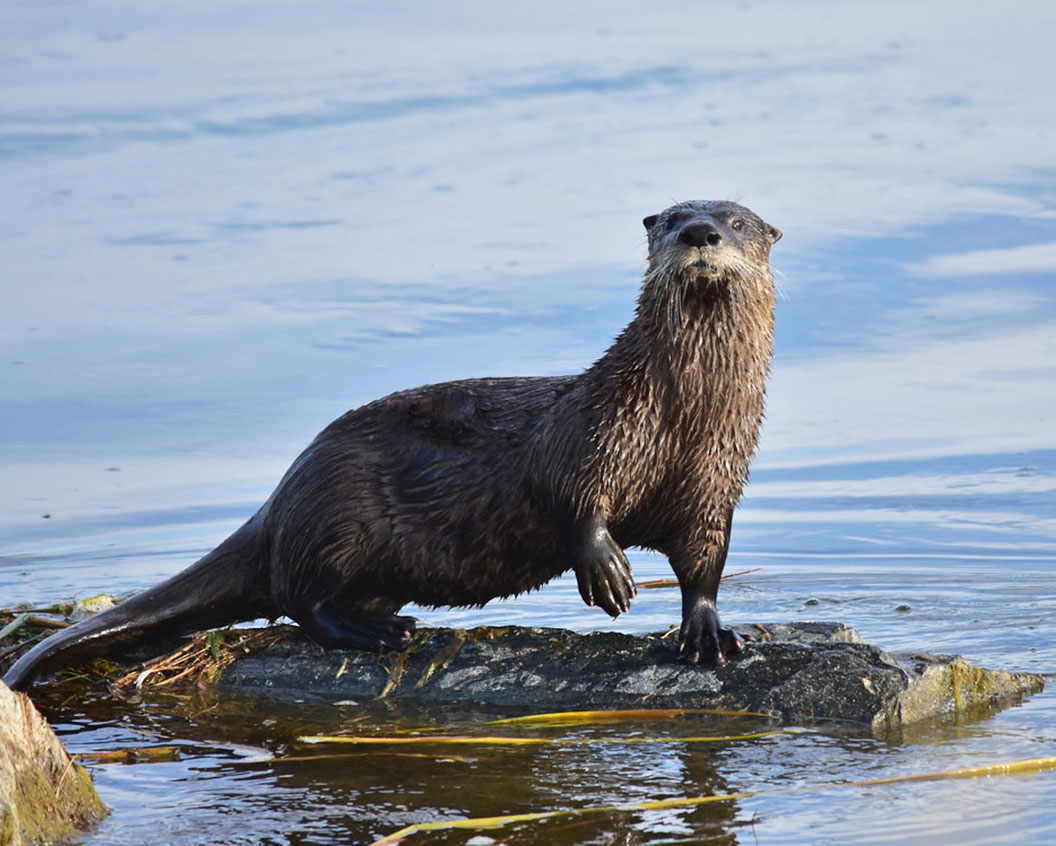 The sight of a group, or “romp,” of otters crossing the bank of a pond with their playful, loping gait can’t fail to elicit a smile. Sleek and weasel-like, these carnivorous mammals have rich brown fur and grow to between three and four feet long. Though sightings of the river otter on Fishers Island are rare, there is abundant evidence that they are present here. As a species they are mostly nocturnal from spring through fall, making them hard to spot. During the quiet winter months, however, river otters become active during daylight hours. On a chilly afternoon, this past February, a singular river otter was observed in the Duck Pond near the Ferguson Museum.

If you’re lucky enough to spot one, look for these telltale characteristics. River otters have the same general body shape as mink, but they are much longer and heavier, weighing 16 to 26 pounds. At night, a river otter’s eyes shine a pale amber in the glow of a flashlight, while a mink’s eyes appear a yellowish-green. Their tails are different, too; a mink’s tail is thin but bushy like a feral cat’s, while an otter’s is thick and oval at the base but flattens out and tapers to rounded point. Finally, mink have pointed faces, while otters have broad muzzles. 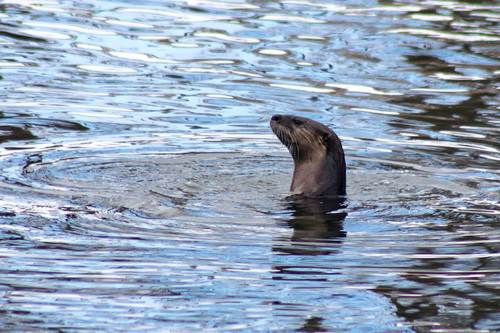 Up periscope. Courtesy of Zac Cota/iNaturalist.org

Principally an aquatic predator, the river otter often swims with only its nose, eyes, and ears protruding above the surface. Occasionally an otter will bring its entire head and neck out of the water to look around, a behavior called “periscoping.” While other aquatic mammals like the muskrat and beaver tend to swim in straight lines, otters change course frequently in their hunt for prey.

Otters are opportunistic hunters, but research indicates that they prefer fish between 4 and 7 inches in length. They are ambush predators who rely on their acute hearing, sense of smell, and sensitive whiskers to locate prey. In certain regions, blue claw crabs are a much sought-after meal, but a wide range of other crustaceans, snakes, frogs, salamanders, and even hibernating snapping turtles also find themselves on the otter’s menu. A healthy otter consumes 2.2 to 3.3 pounds of food per day. Otters forage 3-5 hours per day, though a nursing female will spend up to 8 hours a day hunting. These caloric needs require up to 15 miles of shoreline as a home range, depend-ing on the abundance of prey. Fishers Island provides an ample amount of suitable habitat. Our Island has more than 23 miles of saltwater coastline and 4 miles of brackish and freshwater shoreline around the ponds. Otter territories often overlap, so several groups could be in residence here.

Given the opportunity, a male otter will mate with multiple females. Female otters are capable of a reproductive strategy called delayed implantation, in which the embryo can be kept in a state of dormancy for up to 12 months. Gestation takes just 5 to 7 weeks. Young are born from April to May in a den on a bank with an underwater entrance. The female cares for the young alone. After a month, young otters are ready to leave the holt. In two months, they learn to swim. By the time they’re a year old, they are ready leave their mothers and to go out into the world. Young otters often travel together and are known for their sense of play.

Otters are very aquatic, able to swim at 7 mph, dive to 66 feet, and remain underwater for over 4 minutes (though 20 seconds is the norm). They can travel up to 26 miles per day. Because otters are vulnerable out of the water, they always take the shortest overland path between two waterways. This less-ens their exposure to their principal enemies: large dogs, coyotes and, for the young, raptors. 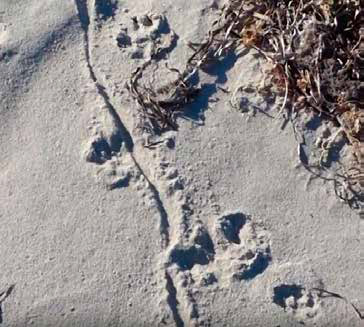 What To Look For

On Fishers Island, direct sightings of otters between spring and fall are rare due to the animals’ nocturnal schedules. In winter, otters have been observed in many of the ponds on the Island, but they are most often sighted in the vicinity of the Duck Pond. Species verification often depends on locating la-trine sites where scat is present. Tracks in soft ground can also indicate an otter’s presence. When conditions are favorable, footprints are separated by the long impressions of the tail be-ing dragged, as pictured below.

Scat sites can be found within 7 feet of the water on points of land, isthmuses, large trees, or rocks. The scat is greenish (when fresh) and contains scales, fish bones, and crab parts. In 2013, over Fishers’ 4.2 square miles, an otter expert from Long Island identified 23 latrine sites. Many of these sites are on Land Trust property and are easily accessible. Keep an eye out and you might discover more. 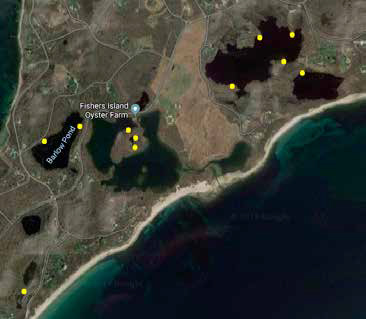 Settling Down or Passing Through?

It is unclear whether the river otters are looking to resettle here or using the Island as a stopover on their way to Long Island. Surprisingly, it is difficult to track otters. Following their nocturnal and aquatic activity would require some form of telemetry, such as the radio collars used to track coyotes and wolves, which periodically transmit location data to receiving equipment for monitoring. An otter’s head and neck diameters are the same, however, so tracking collars cannot be used. Only an implanted transmitter works, and that is expensive enough to prohibit regular use. The limited data available on the movement of otters suggests that despite their aquatic capabilities, they rarely travel more than 4 miles in open water, making most of Long Island Sound impassable. Yet under this constraint, they are easily able to travel the 1.9 miles from Connecticut or Rhode Island to Fishers—and, it’s likely, the 4.6 miles to Little Gull, from which they might island hop to Southold. It is hypothesized that the otters now being sighted on Long Island followed this route. Regardless of whether Fishers Island is a destination or a place to rest on a longer journey, the river otter is a fascinating and welcome addition to our Island. Please share your person-al sightings with the Museum. We will in turn share them with naturalist and wildlife biologist Mike Bottini who is based on Long Island. His 2013 research paper about otters on Fishers Island helped inform this article.