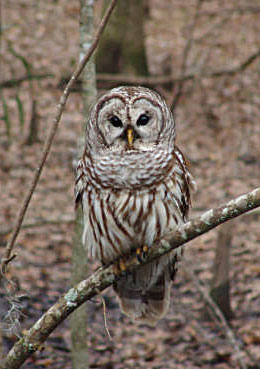 For a relatively small island, Fishers has a thriving owl population. Owls are sighted frequently and often heard calling at dusk and during the night. In southern New England, the Barred Owl (Strix varia) is the most common large owl. This holds true on Fishers Island as well and many of us have seen or heard this owl with its distinctive eight-note call and/or its several variations. The barred owl during the breeding season is renowned for its vocalizations emitted by both male and female. It is the noisiest of owls, producing a cacophony of loud vehement calls. The most distinctive hoot is often phrased as: “Who, cooks, for-you? Who, cooks, for-you, all?” with the last syllable dropping off noticeably. Like some other owl species, Barred Owls will call in the daytime as well as at night. The calls are often heard in a series of eight, then silence, when the owl listens for a reply from other owls. One owl on the island is well known for answering the noon whistle with this hoot.

The Barred Owl is a medium-sized gray-brown owl that is streaked with white horizontal barring on the chest and vertical barring on the belly, thus giving rise to its common name. These owls are round-headed with a whitish/brown facial disk with dark brown trim. The eyes are brown, and the beak is yellow and almost covered by feathers. Plumage between males and the larger females is similar. In all owl species, the facial disk (the front of the face) is almost circular and slightly hollowed. The shape of the facial disc helps funnel sound to the ears. The feathers around the facial disc often stand out slightly from the rest of the feathers on the head, absorbing sound from other directions, ensuring better resolution of sounds directly in front. Owls have extremely acute hearing and are able to locate prey through sound alone. The ears are located on either side of the head and are placed asymmetrically, one ear higher than the other. In Barred Owls, the right ear is higher than the left.

The Barred Owl is a bird of deep, dark woods, its preferred habitat being heavily wooded swamps. On the island, it is found in rather diverse locations, many of which are small woodlots close to town. The breeding season for this species is fairly long and may last from February through August, depending on the region. Re-nesting is common if the eggs or brood is lost and even a third set is possible after the loss of the second set. The Barred Owl is monogamous and probably pairs for life. Barred owls prefer to nest in the hollow of a tree and are incredibly faithful to their nesting sites. No actual nest is constructed, although feathers or other soft material may be placed on the floor of the hollow. On the mainland, barred owls are frequently found in the same locations as the Red-shouldered hawk, the owl’s diurnal counterpart. It is not unknown for the two bird species to share a nest. There are several instances of nests found with eggs of both hawk and owl leading one to speculate on whether hawk, owl or both rear the chicks.

The Barred Owl has an extremely varied diet composed mostly of small mammals, especially small rodents, along with a good percentage of birds. Prey also includes arthropods, fish, reptiles, amphibians, and invertebrates. Birds up to the size of grouse, pheasant, partridge and even smaller owls will be taken. Mammals consumed include voles, mice, shrews, squirrels, wood rats, rabbits, opossums, and chipmunks. Other prey includes snakes, frogs, lizards, salamanders, mollusks, insects, and the Barred Owl is also known to have mastered fishing. This owl is clearly an opportunistic forager taking whatever prey is available. 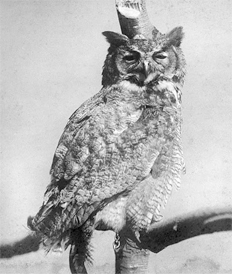 Another common owl on the island is the Great Horned Owl (Bubo virginianus). This large owl, ranging from the arctic tundra to South American rainforests, is one of the most widespread and common owls in North America. Great Horned Owls have a large repertoire of sounds, ranging from deep booming hoots to shrill shrieks. The male’s resonant territorial call, “hoo-hoo hoooooo hoo-hoo,” can be heard over several miles during a still night. Both sexes hoot, but males have a lower-pitched voice than females. Other sounds include a “whaaa whaaaaaa-a-a-aarrk” from disturbed birds, a catlike “meee-owww,” barks, hair-raising shrieks, coos, and beak snapping, which sounds like clapping hands. Most calling occurs from dusk to about midnight and then again just before dawn.

Great Horned Owls range in color from a reddish brown to a grey or black and white. The underside is a light grey with dark bars and a white band of feathers on the upper breast. These owls have large, staring yellow eyes, bordered by a buff colored facial disc. This owl’s name is derived from the tufts of feathers at the top of the head which are for display purposes only and have nothing at all to do with the ears or hearing. When raised the tufts may mean that the bird feels threatened, when laid back they may indicate aggression. The ear tufts also act as part of the owl’s camouflage, breaking up the round outline of the head. The large feet are feathered to the ends of the toes, and the immature birds resemble the adults. Females are 10 to 20 percent larger than males, but similar in plumage.

Great Horned Owls are found in a wide variety of habitats, but prefer open and second-growth woodlands and agricultural areas. They often inhabit the same areas as their daytime counterpart, the Red-tailed Hawk. The Great Horned Owl uses a variety of nest sites, including trees, cliffs, buildings, and the ground. These birds do not make their own nests and typically take over nests in trees made by other bird species and add some nest material. The Great Horned is the earliest nesting owl with breeding season from December to July. Monogamous pairs have one to five eggs with two being typical.

These owls are efficient nighttime hunters that strike from above, and use their powerful talons to kill and carry animals several times heavier than themselves. The Great Horned Owl is a very opportunistic forager that generally chooses a perch and scans for prey. These owls will also walk on the ground in search of prey and have even been reported to wade into the water in search of food. Great Horned Owls prey upon a huge variety of creatures, including raccoons, rabbits, squirrels, domestic birds, falcons, and other owls. They regularly eat skunks, and may be the only animal to do so. Great Horned Owls also prey on smaller owls and have been known to attack and kill Red-tailed Hawks. This owl has no predators other than man and will eat anything from small fish to domestic dogs and cats.

There are other owl species that have been seen on Fishers. Although not resident on the island, the Short-eared Owl (Asio flammeus) is an occasional visitor. The Short-eared Owl is highly migratory and nomadic, thus not often seen. Its habitats include wide open spaces such as grasslands, prairie, agricultural fields, salt marshes, and estuaries. This medium-sized owl is crepuscular and can be seen at dusk or in early morning as it will hunt during daylight hours. On the island, this owl has been spotted near the airport and along the beaches by Race Point. Also seen sporadically at Fishers is the Snowy Owl (Nyctea scandiaca). This is an owl of the arctic tundra that occasionally wanders far to the south during winter. It is a large white owl, easily recognized. This owl hunts during the day and will sit motionless on prominent lookouts, waiting to pounce upon its prey. In the arctic, these owls feed primarily on lemmings; however, they will also take rabbits, rodents, waterfowl, other birds, and fish. Other occasional visitors include the Long-eared Owl (Asio otus) and the Northern Saw-whet Owl (Aegolius acadicus).

We are fortunate on Fishers Island to have diverse habitats that can accommodate a variety of bird species including these most interesting owls. Much of the woodland habitats that these owls inhabit on Fishers are located on Land Trust property. This ensures that these interesting avian species will continue to have protected habitat on our Island.