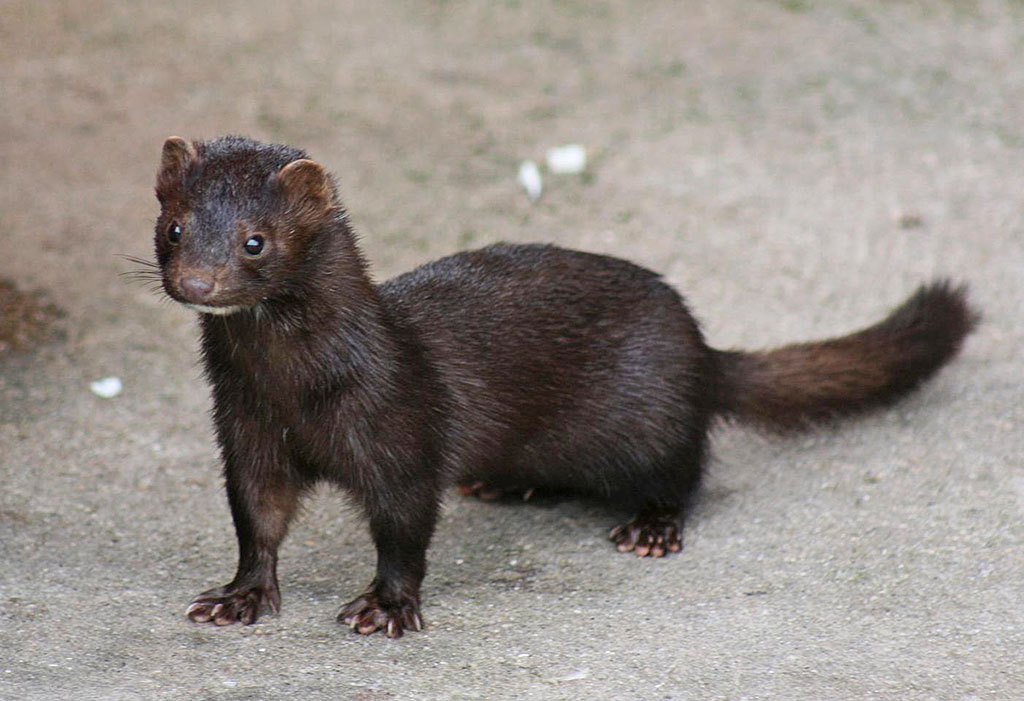 Each year there are reported sightings of a chocolate to dark brown weasel-like animal about two feet in length with a bushy tail. Detailed observations mention white on the animal’s chin and throat and a tail about one third of its total body length. If you shine a light in this creature’s face at night, its eyes glow a yellowish green. What is this mystery animal? The American mink. Though sightings are rare, minks are not. They’ve been spied in a wide range of locations on the island, from haunting Pirates Cove to dispatching rabbits along the Bike Path.

The mink is found in diverse wetland habitats such as marshes, ponds, and tidal flats, and it occupies forests in the winter. This predator is a tireless wanderer. While generally active at night, dawn, or dusk, the mink adapts its behavior to prey availability, so it’s sometimes seen during daylight hours.

If you can’t catch sight of the animal itself, there are abundant signs of the presence of mink as well. You may see tracks in the mud or snow. The forefeet imprints are fairly round and 1½ inches wide, while the hind feet are 2¼ inches long. In snow, the tracks are slightly larger. Look for holes in the snow where the mink plunged for prey or a trough in a snowy bank made by sliding—similar to that made by an otter, but smaller. The 5 to 6 inch long scat is dark brown, cylindrical, and sometimes segmented; it often contains visible bits of bone and fur. Scat is generally deposited on rocks and logs near the den, and on the island it’s often found along the shore of the pond behind the Museum. A mink den is indicated by the presence of a 4 inch hole in a pond bank, usually between tree roots or in or under logs. Most dens are temporary, and a male will have several over its 30-acre range.

The mink is a highly developed predator with excellent eyesight and ultrasonic hearing in the range produced by their potential prey. They are accomplished swimmers, able to dive to depths of over 18 feet and swim underwater more than 90 feet. They’re skilled tree climbers who can jump from tree to tree and descend from trees head first. A mink’s favorite food is the common muskrat, though it will also accept rabbits, mice, squirrels, chipmunks, fish, frogs, snakes, young turtles, birds, and crustaceans. A mink captures larger, struggling mammals by wrapping its body around them, killing them with a bite to the nape of the neck. They often kill birds, including larger species like seagulls and cormorants, by drowning. After feeding, the mink will cache excess food in its den.

Mink are solitary creatures; during their 10-year lifetime, males and females come in contact only to mate. Males’ bodies are longer than females’ and about twice as heavy. Males maintain exclusive territories that are marked with a scent often compared to that of skunks. When they meet, males fight each other viciously. Several female territories may overlap with that of a single male. The males are promiscuous. Mating occurs from February through April, and the female delays implantation until conditions are favorable. She burrows or excavates a nest 10 to 12 inches in diameter, lining it with fur, feathers, or plant material. One to ten young (typically four) measuring about the size of a cigarette are born in April or May. In about eight weeks the kits emerge from the den and accompany their mother foraging; they can often be seen during daylight hours at this time. The family disperses in early fall.

The mink has few natural predators, and the coyote and Great Horned Owl are the only mink hunters on Fishers Island. Trapping, which led to the extinction by 1860 of the subspecies that once roamed the rocky shores of New England, is no longer a threat, as the pelts, like other furs, are nearly worthless today. Mink are highly susceptible to mercury poisoning. Reproductive damage from PCBs has been reported and is a concern—as are certain pesticides, which accumulate in minks’ tissues. Luckily, the populations are considered stable throughout New York State.

So keep an eye out for sightings and signs of these versatile, tenacious animals as you travel the island’s roads, paths and trails. 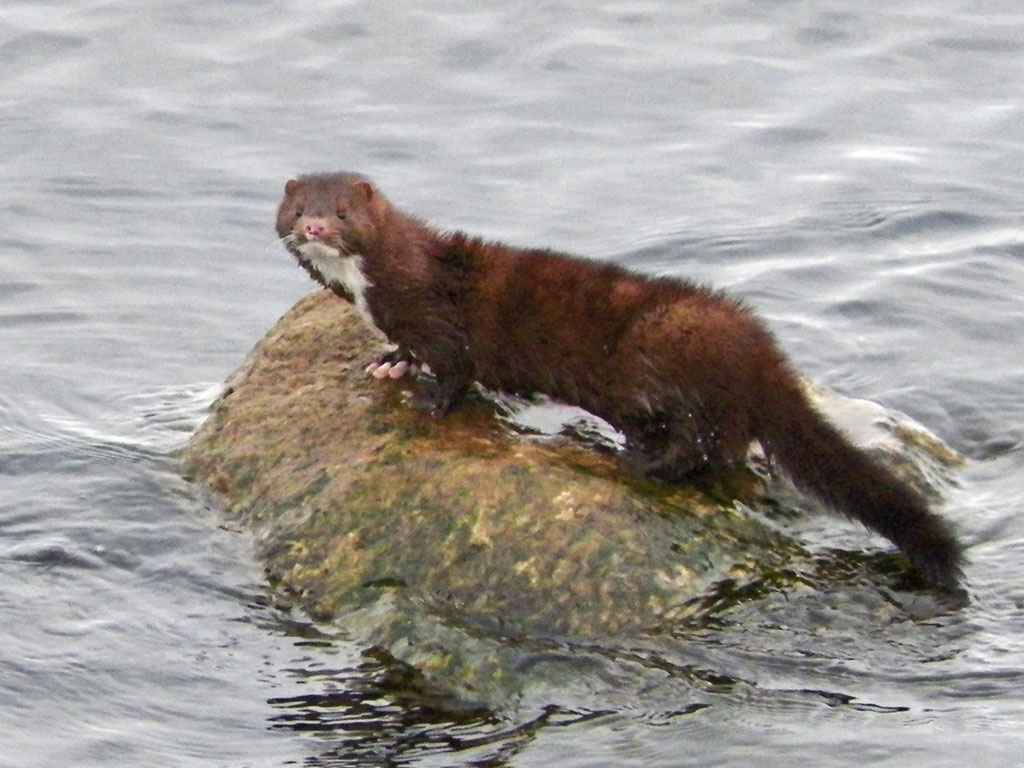