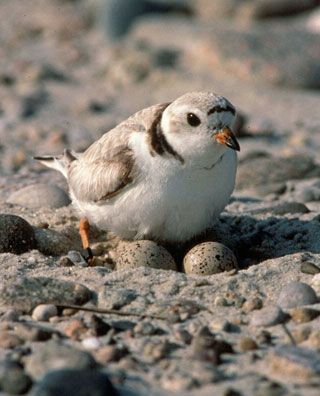 Two years ago, a bird not seen at Fishers Island for a number of years, returned. The bird was the Piping plover (Charadrius melodus), a federally threatened species in the Atlantic region. During the 1970s, the island supported a small colony of this species near Middle Farms; however, habitat change and other causes resulted in the disappearance of this bird from Fishers. Happily, a pair of piping plovers was noted at Fishers during 2009 and 2010. In an effort to protect the pair, the Museum has put up signs alerting people to their presence.

The Piping plover is a small rather stocky shorebird that is white underneath and buff-to pale gray above. Adults have orange legs, a black mark across the forehead and a near circle of black around the neck. The bird nests and feeds along coastal sand and gravel beaches and is well camouflaged, blending perfectly into the backdrop of sandy, gravelly beaches. The Piping plover is named for its clear bell-like call, a short “pipe” which is frequently heard before the bird is spotted. 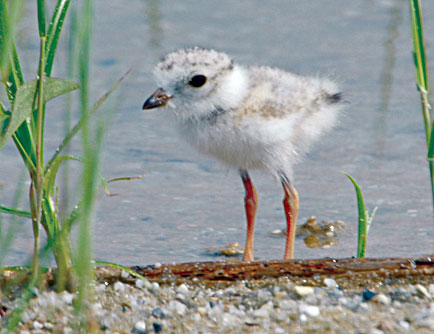 Young Piping plover.
Photo by US Fish and Wildlife Service

The Piping plover has been under pressure in this country over many years. First hunted for feathers, they were nearly wiped out at the turn of the century. The bird rebounded to a peak in population during the 1940’s. Recreation along beaches in addition to beachfront development resulted in a serious decline of Piping plover populations; however, Endangered Species Act protection has proved beneficial to Piping plovers and the population is once again on the rise. Nonetheless, the population along the Atlantic coast is currently only about 2,000 pairs.

The Piping plover nests directly in the sand on the high part of a beach. Nests are thus vulnerable to recreational activities along a beach as well as unusually high tides. The nests are also easy pickings for predators such as raccoons, feral cats, and black-backed gulls. Plovers typically lay four eggs which hatch after about 25 days. The chicks are precocious and can move almost immediately after hatching. They are downy versions of the parents. Plovers feed upon small insects and crustaceans picked from sand and seaweed. 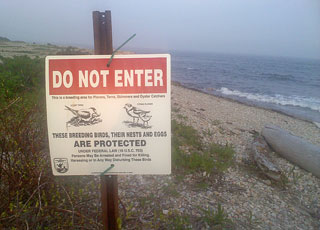 We are hoping that the Piping plover will return again in 2011. The Museum asks for your patience and requests that you refrain from walking dogs at South Beach during the nesting season which extends from March until early July. If you venture to the beach, please remain well below the tide line and leave no scraps of food behind as this may attract predators. We thank you in advance for your cooperation.