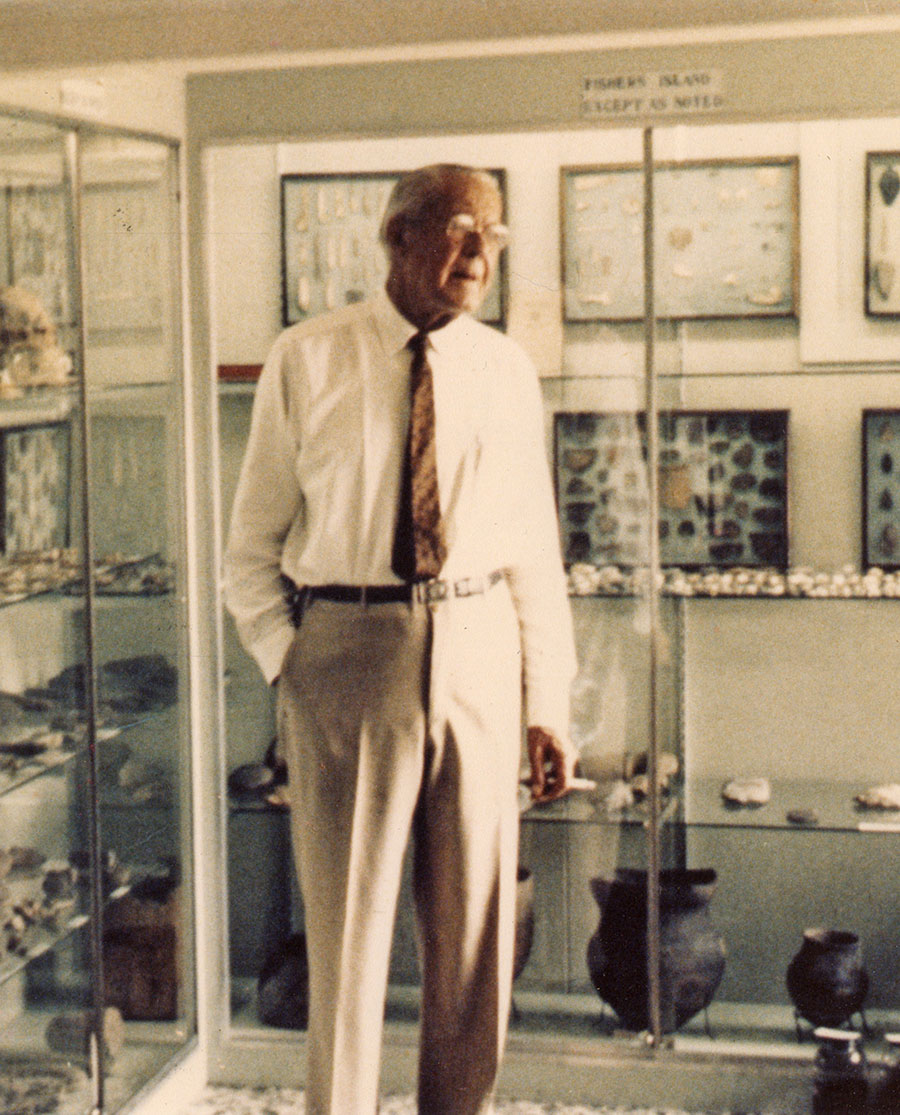 William Shirley Fulton posing by archaeology cases in the first Museum, circa 1963. Mr. Fulton, a noted amateur archaeologist, was the Museum’s first president. He founded the Amerind Foundation in 1937, a museum and research facility located in Dragoon, Arizona that holds one of this country’s finest archaeological collections. 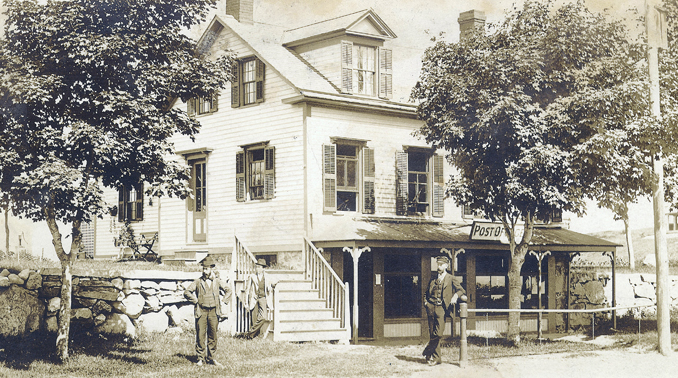 The rented storefront that once housed the Island’s Post Office and the Polly’s Shop served as the first home of The Henry L. Ferguson Museum from 1960 to 1972. 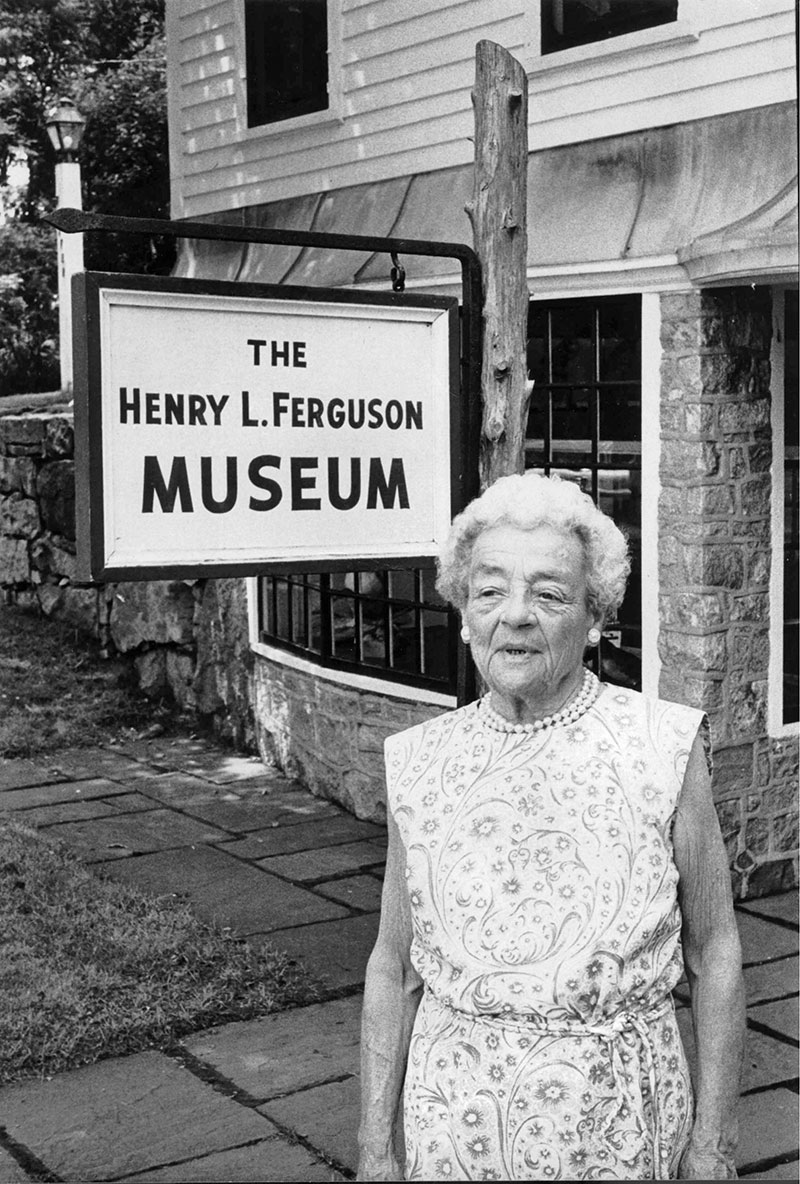 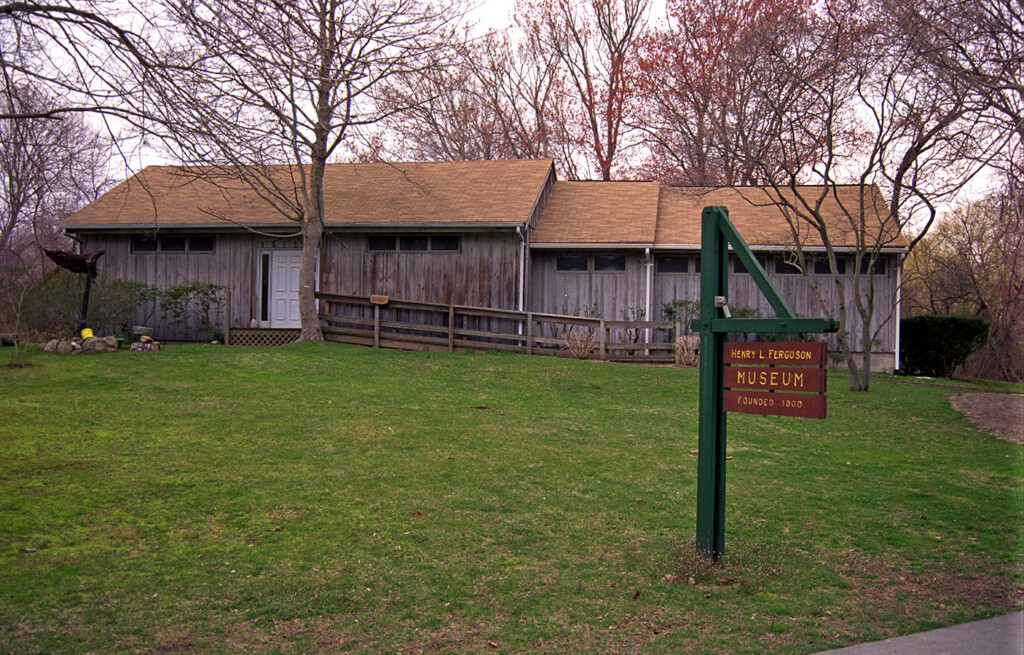 In 1971, the HLFM received a donation from Jansen Noyes, Sr. that enabled the construction and maintenance of a new Museum, given in memory of his late wife, Agnes Blancke Noyes. Completed in 1972, it was designed and built by Fishers Island contractor William Faulkner. This structure ably held the Museum’s collection for almost thirty years until it was razed in 2001. Only the 1980 History Room addition was left standing. 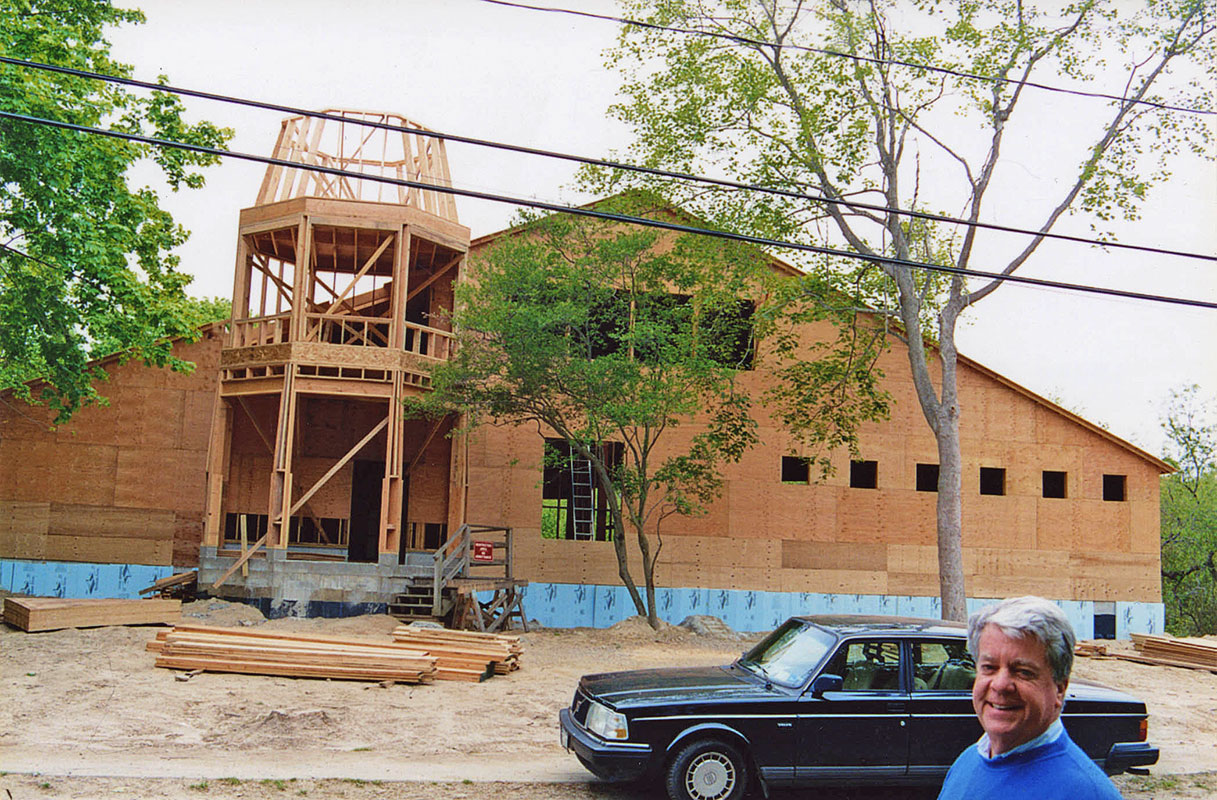 During construction of the new Museum, the HLFM’s collections were stored in the Ferry Annex (former Coast Guard) building and in a storage trailer near the construction site. The Museum staged its 2001 and 2002 exhibits in the annex adjacent to Bagley’s Barn. The second Museum’s History Room, seen still standing in several photos in this series, became the new Museum’s library and office. 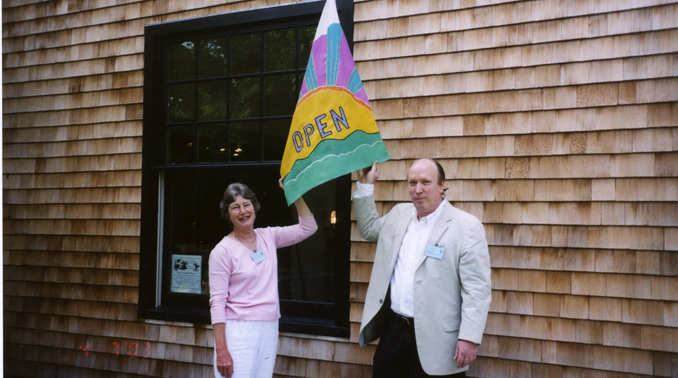 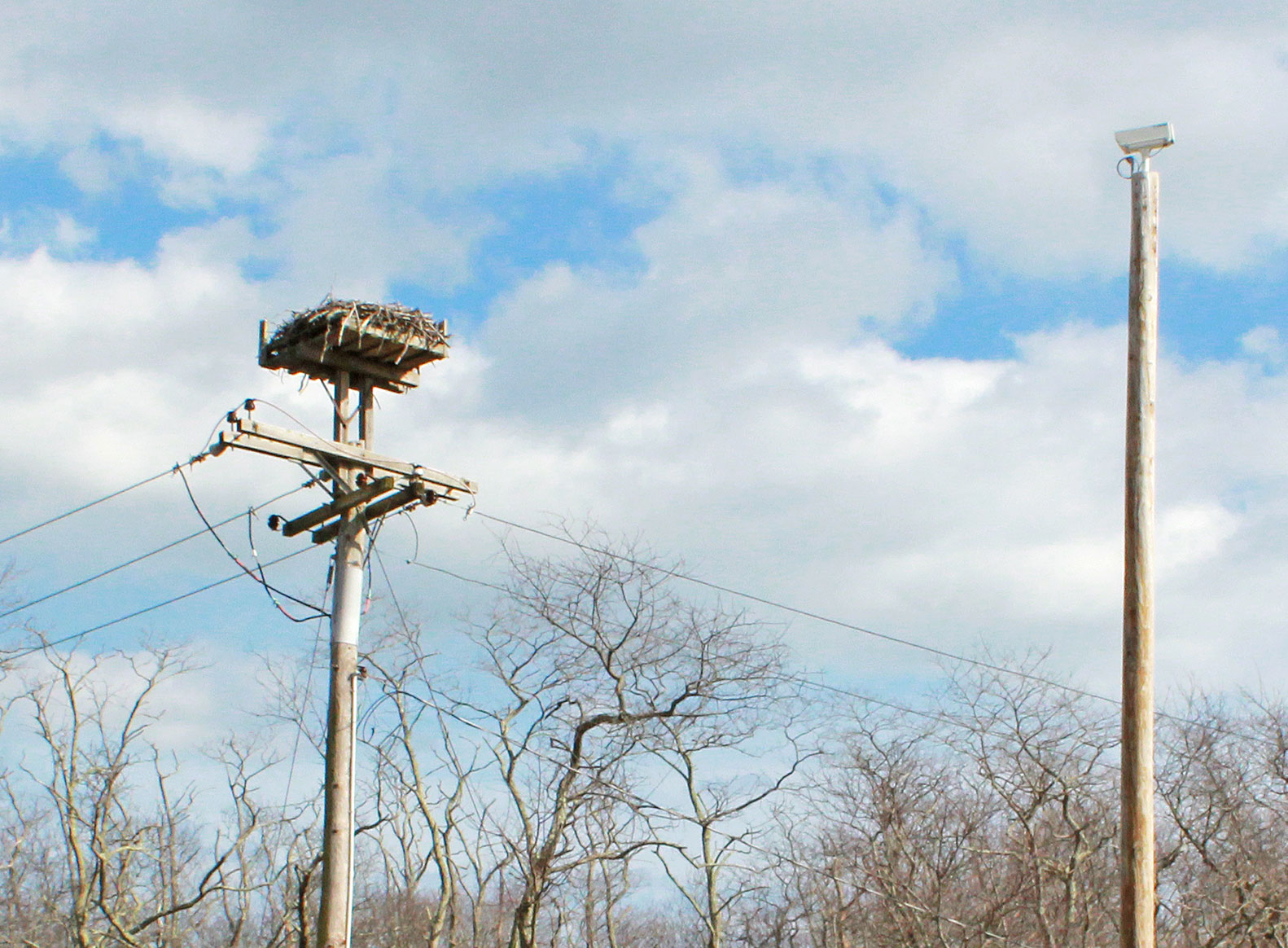 In March 2012 an Osprey Cam is established overlooking nest on main road east of Driving Range at Middle Farms Flats.

1960 July 29 – Committee forms for the purpose of establishing a permanent repository for the bird specimen and Native American artifact collections of the late Henry L. Ferguson; decision made to take five year lease in lower level of Mrs. Gladys Baker’s home on Equestrian Ave. in order to house the new “Henry L. Ferguson Museum” (HLFM).

1965 HLFM renews five-year lease for space in Baker home on Equestrian Ave.; Regents of the University of the State of New York issue Absolute Charter for the Museum.

1965 Aug. 2 – H. Lee Ferguson, Jr. proposes to HLFM Board that vacant land be obtained as a sanctuary under auspices of the Museum; Board embraces this new “progressive course.”

1966 Charles B. Ferguson is elected curator and Edwin H. Horning assistant curator. HLFM Board researches properties on both the east and west ends of F.I. as possible sites for bird sanctuary and memorial for H. Lee Ferguson, Jr. before deciding on a 3.2 acre west end parcel (current Sanctuary site). Land for sanctuary is purchased from Fishers Island Utility Co. for $500.

1966 Aug. 30 – Curator reports 152 species in Bird Collection (including 63 added by the late Lee Ferguson). HLFM Board wholeheartedly approves establishing a Fishers Island Historical Collection to be added to the Museum’s existing collections.

1968 HLFM Board acknowledges pressing need for more display space; Charles B. Ferguson meets with F.I. Library Board to discuss possibility of an addition to the Library to house the Museum’s growing collections; Old Fire House also proposed as possible Museum site.

1970 HLFM Board again debates merits of buying Old Fire House for use as Museum versus erecting new building on Sanctuary property. Pre-fabricated designs, including log cabins, are actively considered for the latter site.

1971 Bishop Henry Hobson elected Museum’s fourth president. The HLFM receives gift from Jansen Noyes, Sr. to construct and maintain a new museum, given in memory of his late wife, Agnes Blancke Noyes. Board authorizes Building Committee to proceed with plans. Mr. William Faulkner, contractor, is hired to design and build a new museum.

1978 Erard A. “Matty” Matthiessen and his son Peter donate an 8-acre property on Island Pond as a sanctuary and memorial for Betty Matthiessen. Charles B. Ferguson becomes the Museum’s fifth president.

1981 Sept. 6 – Board member Robert J. Miller proposes seeking the donation to the Museum of contiguous parcels of land in Middle Farms area initiating the concept of an expanding land trust.

2000 May 28 – Board votes unanimously to accept “Plan B” for new building with only the History Room addition left standing from old Museum.

2003 Penni Sharp is elected the sixth president of the HLFM and Charles B. Ferguson becomes president emeritus. 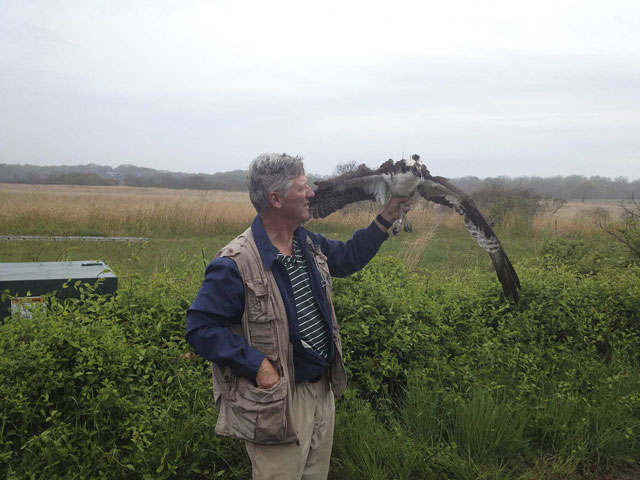 Ornithologist Rob Bierregaard tags one male F.I. osprey, with cell-tower transmitter on May 11, 2013. Bird is named “Edwin” in honor of the late Edwin Horning. 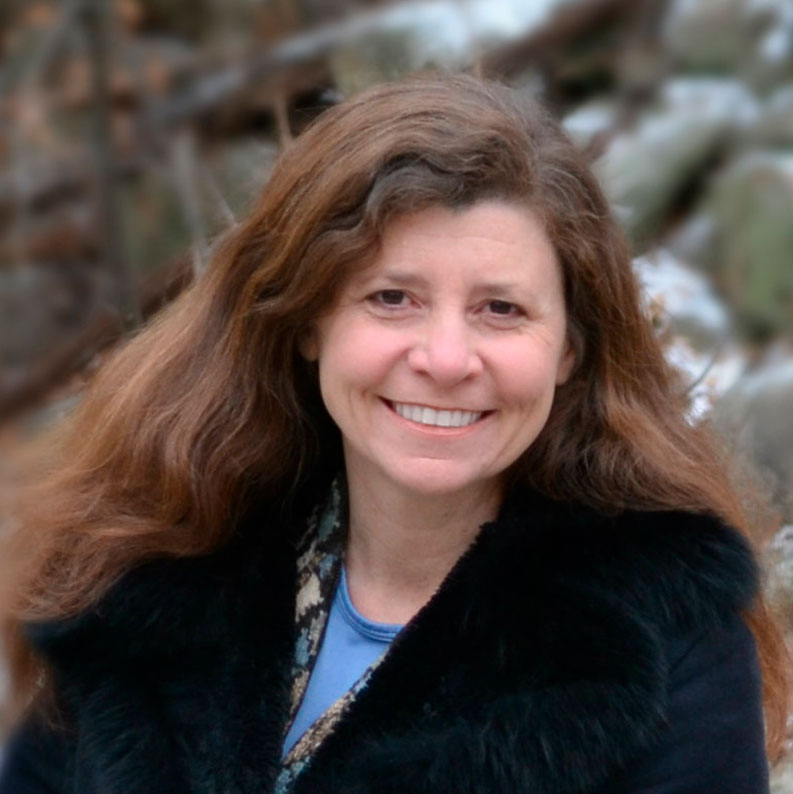 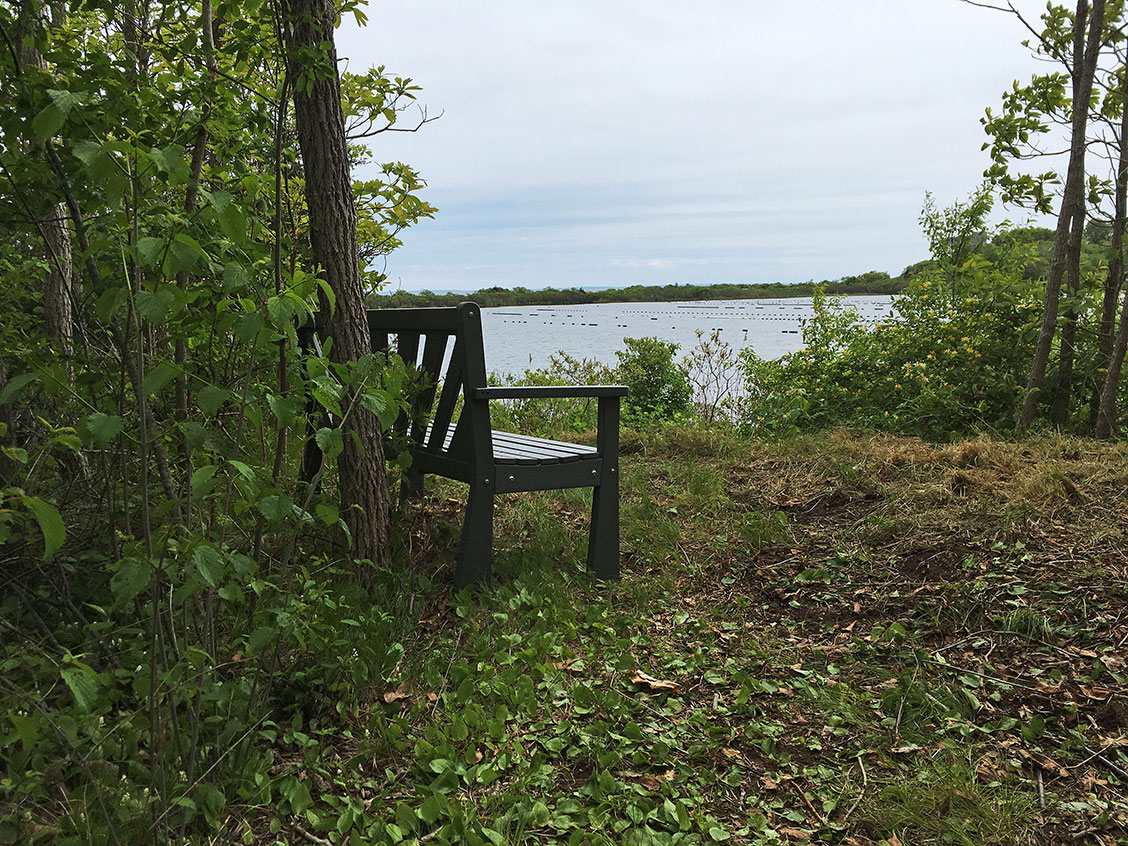 2013 May 11 – Ornithologist Rob Bierregaard tags one male F.I. osprey, with cell-tower transmitter. Bird is named “Edwin” in honor of the late Edwin Horning.

2016 April – Tagged osprey “Edwin” dies of unknown causes in Waterford, Conn. after arriving back from wintering over in Brazil’s Amazon region.

2016 – Land Trust Committee forms consisting of both HLFM board members and non-board members.

2017 – The Nature Conservancy partners with the HLFM and the F.I. Conservancy to form Fishers Island Seagrass Management Coalition (FISM).

2018 November – Emily Bodell hired by HLFM as first coordinator of the FISM.

2019 August 12-16 – Museum launches Fishers Island Nature Discovery (FIND) with children’s programs split each morning between classes in the Museum and out in “the field.” FIND is directed by Murray Fisher, assisted by two Denison Pequotsepos Nature Center educator/naturalists and Emily Bodell.

2020 March — Connor Jones hired by HLFM as second coordinator of the FISM replacing Emily Bodell who is bound for graduate school.