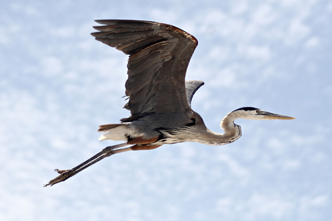 Fishers Island is host to many bird species and perhaps the most striking are the herons and egrets, members of the bird family Ardeidae. Members of this family are long-necked, long-billed, long-legged birds with large wings. Anyone observing herons in flightwill notice that they hold their necks in an “S” shaped curve. This is due to the fact that their neck verte-brae are of differing lengths. Herons are cosmopolitan birds, meaning that they are found on all continents of the world. They feed chieflyon animal food, including fish,amphibians, crustaceans, insects, and reptiles.

Many herons display elaborate plumes during the breed-ing season. These plumes, once sought by the millinery trade, brought many species to the edge of extinction. Herons and egrets are also known for their powder downs. These are unusual feathers that are never shed but continue to grow throughout a bird’s life. These feathers wear at the tip into a powdery substance that is used by the birds in removing dirt and grease. Once they have cleaned their feathers with pow-der down, the birds will waterproof them using oil from the uropygial gland.

The great blue heron (Ardea herodias) is the largest of Amer-ican herons and can be seen on Fishers throughout the year. The stately presence of a great blue heron when poised mo-tionless at water’s edge has made it a popular subject for art-ists and photographers. The great blue can remain still for a seemingly endless time, concentrating on its search for prey. A quick dart of the head and strike of the bill and a small fishor crab is seized. The vigil is then resumed. Courtship among great blue herons is quite an event. A ritual dance is performed by the herons which move around one another in a circular pattern with wings outstretched. Occasionally, males will fighteach other in a contest over a particular female.

Great blue herons nest in colonies and prefer to locate their nests in trees. The nests are large platforms constructed of sticks and only slightly hollowed. Both male and female in-cubate the pale green eggs. The young birds are helpless and ungainly and must be tended by the parents who feed them regurgitated food at first.Parents will later deposit solid food into the nest. If undisturbed, the young may remain in the nest until they reach adult size. 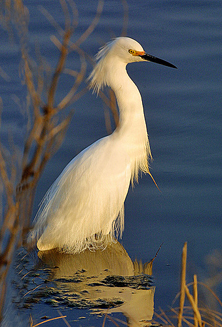 A smaller, equally grace-ful member of this family is the snowy egret (Egretta thula). This snow white bird is distinguished by its black bill, black legs and startling yellow feet. During breeding season, long deli-cate plumes extend down its back. During courtship, snowy egrets display their plumes to attract and later to greet a mate. The crest on the head and the plumes of breast and back are elevated and spread and the wings held open. Males become quite aggressive and spats are common. Like the great blue heron, the snowy egret is a colonial nester and it too builds a stick nest of rather flimsyconstruction. Four to fie bluish green eggs are laid and both parents share in the incubating. The young are fed regurgitated food and after several weeks, leave the nest to perch on twigs of a nearby branch during the day, returning to the nest at night.

Similar but quite a bit larger than the snowy egret is the great egret (Ardea alba). The great egret has a long yellow bill and black legs and feet. The bird is tall and slender with a very long neck. It lacks the plumes that distinguish the snowy egret and great blue heron. It too is a colonial nester requiring a grove of trees in which to construct the stick nests. In past years, heron rookeries have been located in various parts of Fishers Island. Several years ago, South Dumpling was the site of an active rookery.

Two night herons can be seen on Fishers Island, the black-crowned (Nycticorax nycticorax) and yellow-crowned (Nycta-nassa violacea). The black-crowned night heron is a medium-sized stocky bird. The crown of its head and back are black, wings gray, and underparts white. During breeding season, white plumes extend from the back of its head. The yellow-crowned night heron, more solitary and not as common, is less stocky than the black-crowned. A black head, marked by an off-white or yellowish crown and white cheeks help to iden-tify this bird. The yellow-crowned has a gray body. Immature birds of both of these species are brown and heavily streaked. As the name implies, the night herons are active at night, feed-ing mostly at dusk and after. However, it is not unusual to see them during daylight hours. 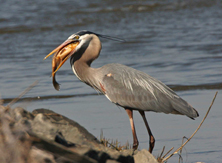 Both species are colonial nesters although the yellow-crowned will nest singly. They are often found in rookeries with other species of herons. From three to six pale blue-green eggs are laid and incubated for 21 days. The young usually leave the nest a month or so after hatching and by eight weeks are strong fliers.

Other members of the heron family can also be seen at Fish-ers. These include the green heron (Butorides virescens), little blue heron (Egretta caerulea) and the tricolored heron (Egretta tricolor). The latter two species are not seen often on the is-land. Herons are best seen at water’s edge, particularly where marshland extends to the water. These areas are rich in the marine species that herons feed upon. We are fortunate that Fishers Island has good habitat for these handsome wading birds.