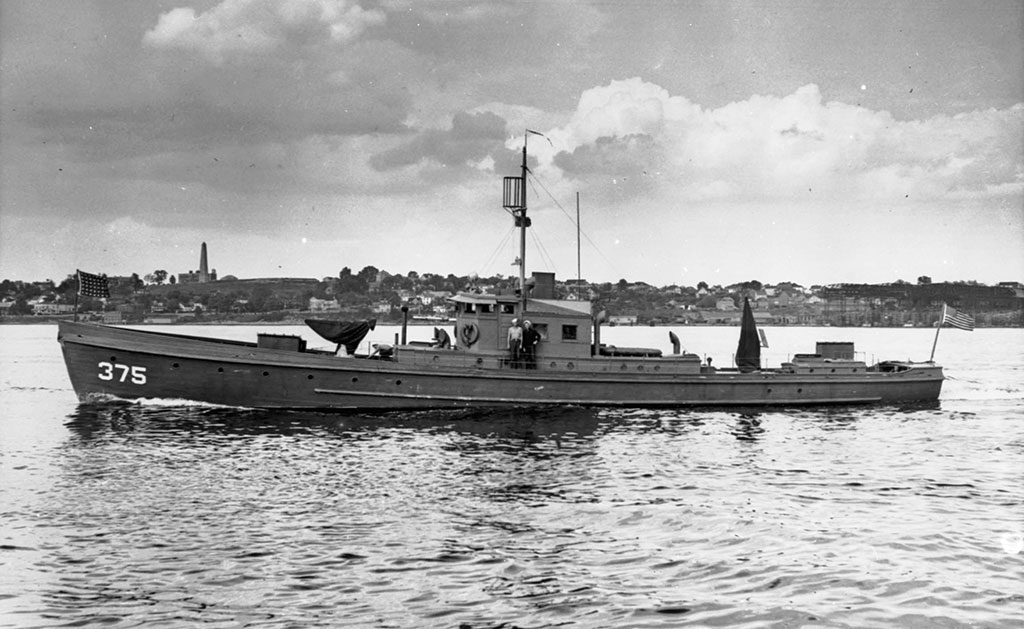 M.V. Islander after conversion for service in World War II.

Director’s note: The following account of ferry transportation in the 1940s is from the December 1967 issue of “Polly’s Letter,” a newsletter distributed by realtor, shop owner, and Ferry Commissioner Polly Edmonds. It was sent out semi-annually from 1964 until her death in the mid-1970s.

We were reminded recently that 25 years ago, late in November 1942, the War Shipping Administration purchased the M. V. Islander from the Fishers Island Navigation Company. They had already taken the ferry Fishers Island or Block Island as she is now known. The Islander was a 110-foot former sub-chaser of the old World War I “splinter fleet.” She carried two cars. She had just had new diesel engines installed when the government claimed her. This may have been the start of the transportation problems which have plagued us to this day. After Islander left for Outside Patrol we had to depend on Espada, a 40-foot cabin cruiser owned by Warren Maynard, Sr. She was seaworthy but small. Of course, she carried no cars. Transportation of vehicles was done on the Army boat, John Baxter, which serviced Fort H. G. Wright. Later came the 60-foot fishing dragger Mandalay. 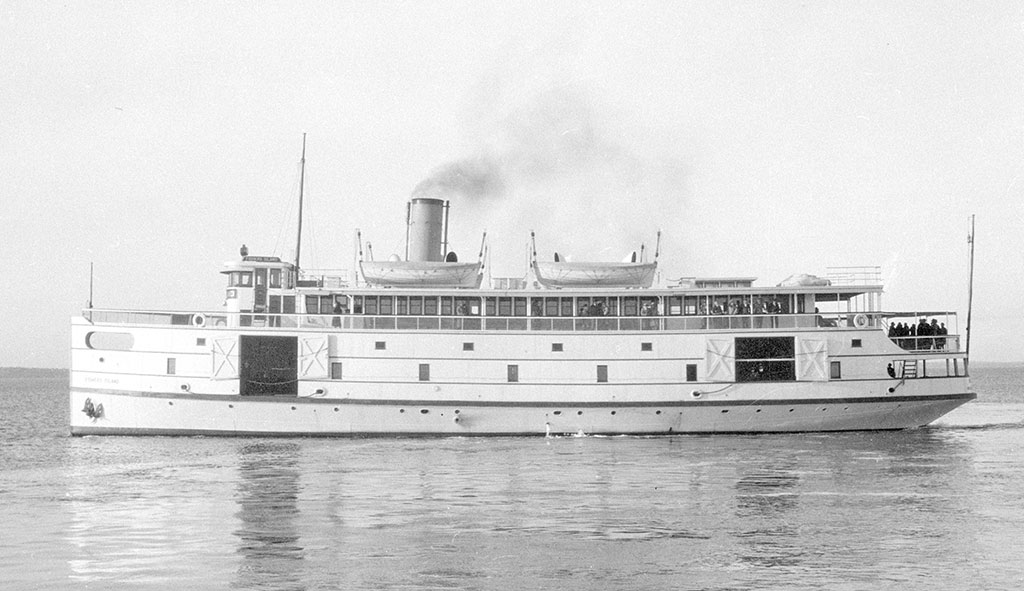 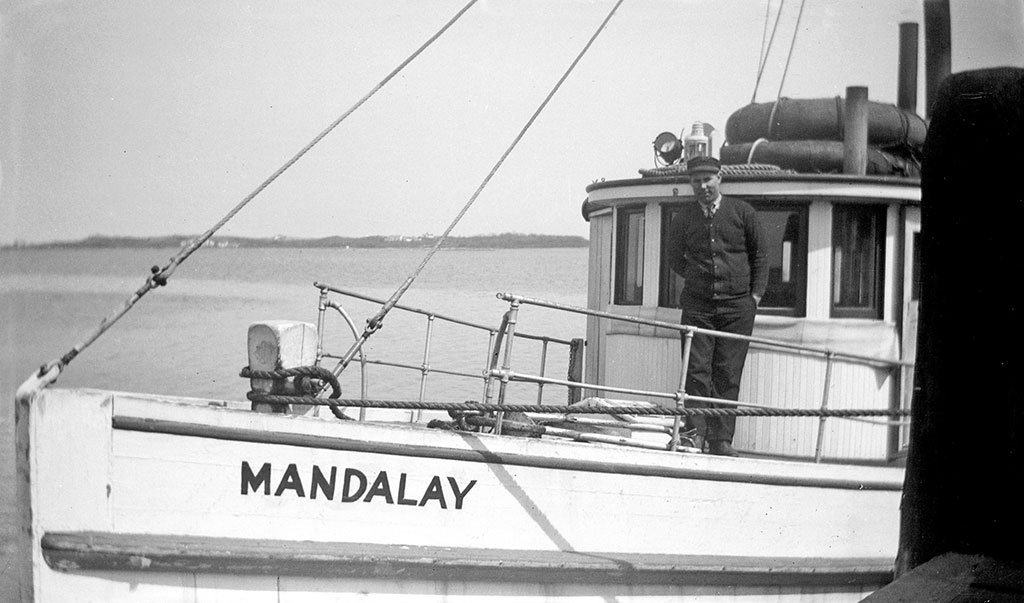 Obviously, this boat carried no cars either. The best place to sit was out on the open deck on top of the beer kegs and other freight. It was a chilly run in the winter, particularly in city clothes. Between them, Espada and Mandalay carried us through the winter of 1943. In May of 1943, the M. V. Ranger was purchased – another sub-chaser. We were again limited to two cars with the Army’s John Baxter doing most of the heavy work. Many of you who came to the Island the summers of 1945 and 1946 will remember the long wait and the intricate maneuvering to get your vehicles across her narrow beam. In the summer of 1946, the M. V. Pemaquid was assigned to run. She broke down July 3rd and did not return until the middle of August. The last summer the Fishers Island Navigation Company was in existence was 1947. Our ferry was an old timer named Sprigg Carroll with a capacity of two cars. She was frequently breaking down and disrupting the best made plans of all concerned. On October 15, 1947, the Fishers Island Navigation Company ended its 58 years of operation. Shortly thereafter, the Fishers Island Ferry District was established by an act of the legislature to provide future service to the Island. Because it was organized so rapidly, it was first known as the Fishers Island Temporary Water Commission. Five commissioners were appointed by the Town Board of Southold, New York. The Army’s John Baxter furnished transportation for passengers, vehicles and freight. In 1950, the Commission purchased the Mystic Isle out on the Great Lakes and brought her here for service that continues to this day. In 1967 the Olinda arrived. There have been many problems and there were more than a few boats over the past 25 years. We feel here that at last we are in a position to offer the best service in the history of Fishers Island. 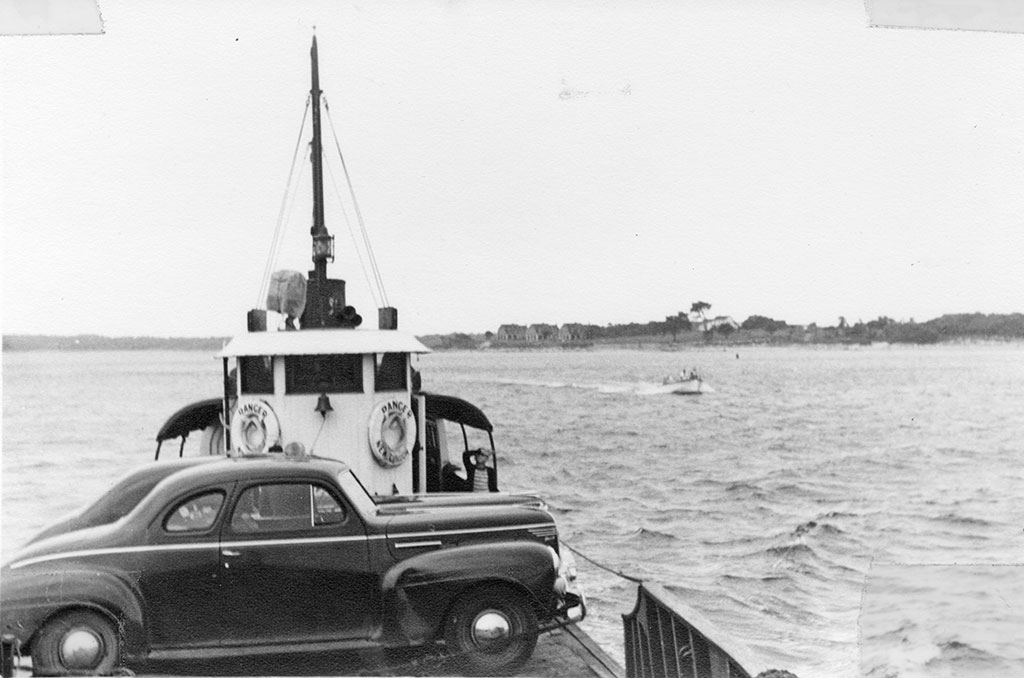 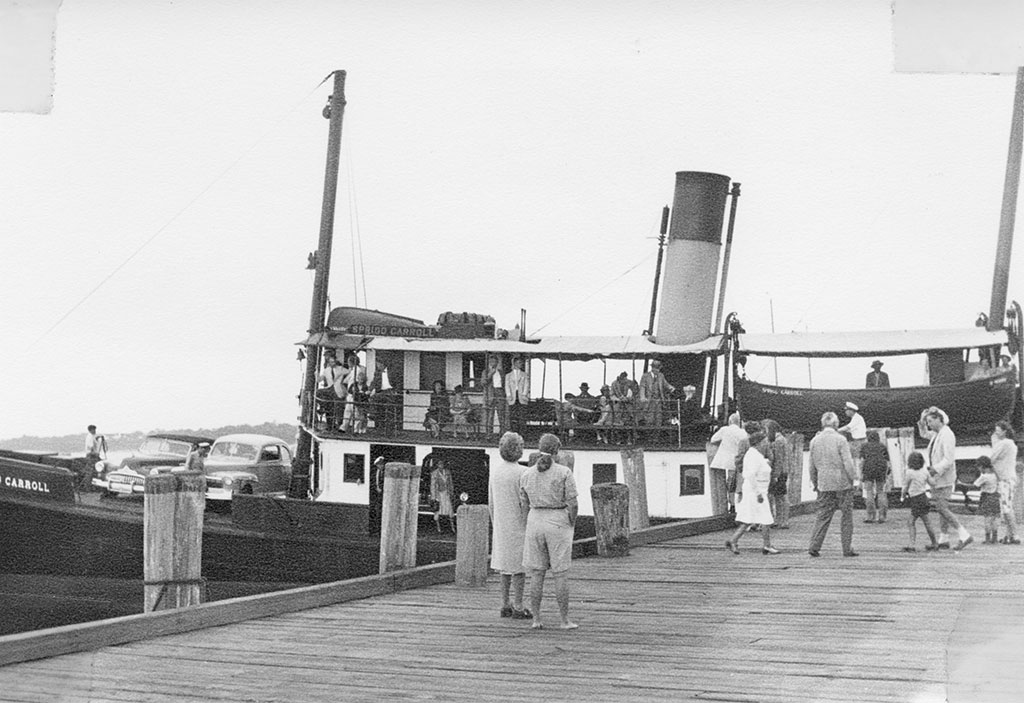