Of all the decades in Fishers Island’s storied history, there are few whose outcome was as unpredictable as the 1870s. The sudden death in 1871 of Fishers Island’s owner, Robert Ralston Fox, derailed his ambitious farm operation and exposed the island to wildly divergent development plans.

Robert R. Fox, a wealthy retired merchant of cotton duck, had purchased the island in 1863 for $55,000 from the last in a long line of Winthrop owners. Fiscal distress had forced the Winthrop family to sell after more than two centuries of successfully running and renting their undivided island as a profitable stock farm and dairy. However, at the time of Fox’s purchase, the island’s farms were all but abandoned and the property was heavily mortgaged. A writer for an agricultural magazine described an island stripped of wood, with fields gone to seed, dilapidated barns, over-grazed land, and “an air of neglect that hangs over everything.”

If the Winthrop family’s sale came as no surprise to contemporary observers, what did raise an eyebrow or two was Fox’s development plan. He wanted nothing more than to restore Fishers Island as a great stock farm. Instead of selling off land lots as many had expected, he kept the island as an undivided property, a rustic private estate. Fox turned a small brick caretaker house into an elegant residence known as the Fox Mansion House where he resided with his wife, two daughters and household servants.

Over the next eight years, Fox, as gentleman farmer, invested some $200,000, in 1860 dollars, into farm infrastructure, including barns, stone walls, wood fencing, and a grist mill. He brought in some fifty farm laborers to work the property. Soon hundreds of prize cattle and several thousand sheep were roaming the fields and hills of Fishers Island again. His untimely death in 1871 brought Fishers Island back to the attention of the outside world and potential purchasers. 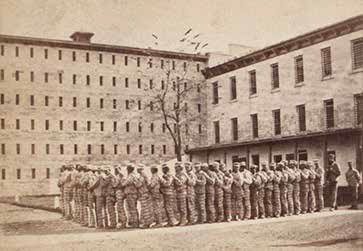 When hints of a possible new sale of Fishers Island cropped up in the press in 1872, development plans quickly followed. Perhaps the most outlandish was a proposal floated in the New York State Assembly that had Sing Sing Prison moving to Fishers Island from “up the river” in Ossining, NY. The idea had first been proposed when the Winthrop family offered the island for sale in the early 1860s, but was quickly tabled when Mr. Fox bought the whole island outright in 1863. In the wake of Mr. Fox’s death, the prison relocation plan was dusted off and seriously debated.

In May 1873, the Assembly passed a bill seeking the removal of the prison from Ossining that authorized Assembly commissioners to select a new site for the prison. Both politicians and the press considered Fishers Island an ideal choice. Boosters listed its numerous merits: chance of escape was minimal; it had fertile soil for raising convict fare (“grain and vegetables, pork, mutton, and perhaps beef ”); there were extensive clay beds on site to fashion bricks for a fortress wall; there was no population near enough to be morally polluted; residents in Ossining confidently predicted rising real estate prices after the prison departed; and, perhaps most importantly, a reasonable purchase price was predicted. The interested legislators pointed out that all the provisioning farms on Fishers Island could be worked with convict labor. There was also talk of introducing table grapes as a crop, as had been done successfully in parts of Long Island. Thankfully, this proposal never came to fruition and we were spared the arrival of agricultural chain gangs to tend our fields. For reasons yet to be determined, no vote was ever taken in the Assembly that might have led to us becoming an island fortress, an impregnable “Alcatraz east.”

The prison plan being a non-starter, Mr. Fox’s widow, Eliza, worked with the executor of the Robert Fox estate to devise a new plan that divided the island into fifteen farms, “calculated geometrically,” reserving the western one-third as a home farm and possible future resort. An auction was held in June 1875, but the land lots failed to sell after reserve prices were not realized. At the time of the auction, there were only seven houses on the entire island, almost all farm cottages.

For the remainder of 1875 and early 1876, the Fox estate hired Ira Hart Palmer, a prominent citizen of Stonington, Conn., involved with steamboat lines and summer hotels, to function as the real estate agent tasked with selling tracts of land on Fishers Island. Working for a 10% sales commission, he printed one thousand promotional envelopes for correspondence that included the following copy:

“Fishers Island to be Summer Resort in 1876”
“Steam and Cable Communications with New London will be Permanently Established.”
“Hotel and Cottage Sites can be Engaged by addressing: I. H. Palmer, Stonington, Conn.”

Mr. Palmer summed up his mid-1870s development intentions for Fishers Island in a letter to the editor published in New London’s The Day on October 26, 1898: “It was my aim, my ambition, my plan to have established colonies at different parts of the island, all desirable, and to have connected the system with a narrow gauge railroad. For instance, set off a large tract for the Springfield contingent, the Hartford, the Meriden, the New Haven, the Norwich and others. Each and all to be strictly a community by themselves—very much as the Norwich colony is at Eastern Point.” As part of his promotional efforts, he brought a group of approximately 100 of New London’s leading businessmen to the island on the Steamer Port Royal. They landed at West Harbor and viewed the surrounding landscape for an hour. Unfortunately for Mr. Palmer, the tour triggered no land sales or development plans.

During 1876, Mr. Palmer did come within days of finalizing the sale of 600 acres at the eastern end of Fishers Island to the Cheney family of Manchester, Connecticut, prominent manufacturers of silk. The sales price was $25,000 for a tract that included the East End (Winthrop) House and East Harbor. Their intention was to establish a Cheney colony on Fishers Island for a family group that then numbered about 70 people. However, the death in March 1876 of Ward Cheney, a founder of Cheney Brothers and a main proponent of the plan, halted the sale and terminated the plan. Were it not for his death, a private family colony would have been established on land that today holds the Big Club and its associated golf course, as well as many private residences. Although the Cheney family didn’t create a unified colony, individual family members built houses within this same area fifty years later as part of the Olmsted Plan. Their residences included the J. Cheney Wells house (today owned by John and Pam Kean), the Charles Cheney house (today’s “Sandsong” owned by Dedo Kidd and Michele Goss), and the W.C. Cheney, Jr., house (today owned by Harry and Nancy Gruner). With no land sales recorded, Palmer recalled that he dropped Fishers Island “like a hot potato, after spending several hundred dollars in pioneering it before the public as a summer resort.” 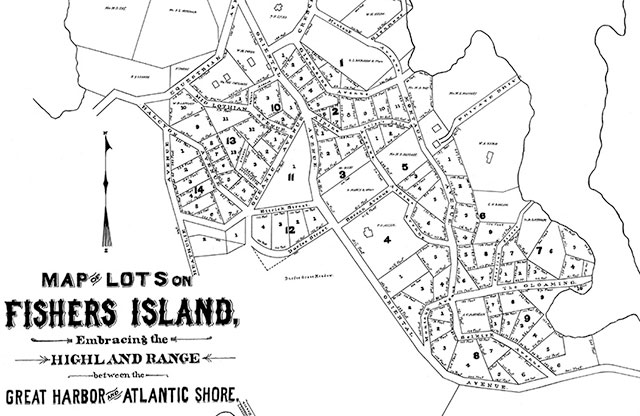 The Fox Estate rebounded from these failed efforts by shifting their attention to the west end of Fishers Island. James Lyles, Mrs. Fox’s son in law, took over as executor and drew up a new development plan that restricted land sales to the west end. The new streets and roads were given fancy names like Halcyon and Equestrian avenues while the east end was kept undivided and undeveloped. Land sales began in the spring of 1876—the first since the Winthrop settlement in the 1640s (excepting Fox family purchases). Allowed to grow, a small New England town, as part of New York, sprang up almost instantly. After centuries of being rebuffed by no trespassing signs and posted notices, people from the mainland were eager to have access. They bought half an acre, an acre, or in some cases larger parcels, and built for either year round or summer use. By the end of the decade, both a winter and a summer community had taken root on Fishers.

These abandoned development plans—including proposals to create an island of farms, a site for a relocated maximum security prison, a trolley-linked string of distinct resort communities, and a 600-acre residential colony for a single prominent family—have been all but forgotten over time. However, they are useful today as reminders of how close we came in the 1870s to becoming a very different island. In the mid-1880s, two Ferguson brothers arrived on Fishers with their own vision for the island’s future. After their purchase in 1889 of approximately nine-tenths of Fishers Island, they built on what had been preserved by the Winthrop and Fox families and charted a new path that is still being followed today.