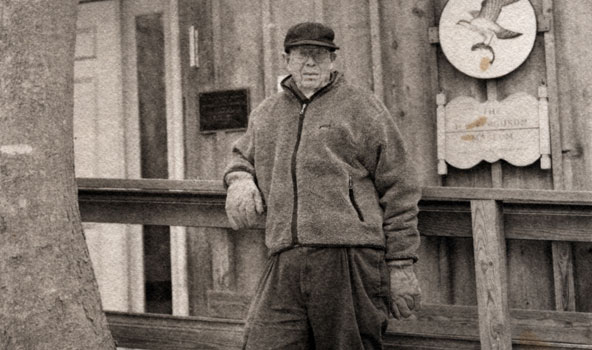 Ed Horning in front of the second Museum, c.1997. Photo by Ethan Kibbe.

My involvement in the Ed Horning Journals Project can be traced back to the Town of Southold appointing me as the Town’s representative to an Audubon New York (ANY) committee that was created to develop a management plan for the Orient Point and Plum Island Important Bird Area (IBA). While this committee was active, Fishers Island resident Jackie Williamson contacted ANY about the IBA program and inquired as to whether any parts of Fishers Island would qualify as an IBA. Jackie offered her personal journals as documentation of the birds of Fishers Island and also noted that Ed Horning, the late curator of the Henry L. Ferguson Museum, had kept journals covering 1966 through 2003 and that these journals were kept at the Museum courtesy of Ed Horning’s family.

One of the tools that ANY had used to document IBAs was eBird, an online database that allows the submission of bird sightings, including historic sightings, from anywhere in the world. As per their website, eBird was launched in 2002 by the Cornell Lab of Ornithology and National Audubon Society and provides data sources for information on bird abundance and distribution at a variety of spatial and temporal scales. eBird’s goal is to maximize the utility and accessibility of the vast numbers of bird observations made each year by recreational and professional bird watchers. The observations of each participant join those of others in a database and eBird then shares these observations with a global community of educators, land managers, ornithologists, and conservation biologists with the data becoming the foundation for a better understanding of bird distribution around the world.

ANY and I recognized the significance of such an extensive series of journals and knew that it was important to get this information entered into eBird. We worked with Ferguson Museum Director Pierce Rafferty and Southold Town Clerk Elizabeth Neville to arrange for the Town to borrow the journals so that I could go through them and type up all of the bird sightings for submission to eBird. Pierce contacted the Horning family and they gave the project the green light.

I then began entering the sightings into spreadsheets so that they can be imported into the eBird database. As of writing this, I am working on July 2000 with just over three years’ worth of journals to finish and have typed up over 20,000 lists. Yes, that’s twenty thousand separate lists! When these lists are submitted to eBird, Fishers Island will be one of the best documented areas in Suffolk County, as far as birds go, for the period the journals cover.

The importance of these sightings cannot be overstated. Although I never met Ed, I have certainly gotten to know the birder side of him through these journals. In fact, in journal entries where he did not note the location of his sightings I can often figure out the location based on the species he reported and the comments he made. The word that best describes Ed’s birding on Fishers Island and his entries in his journals is “relentless.” When there was a good run of shorebirds at South Beach in the summer, he would go there every day, sometimes more than once, and note what he saw. Throughout the journals Ed consistently documented the Osprey nests on the island, at times visiting the same nest several times a day and sketching where the Osprey were on each of his visits. This repeated effort of recording birds at the same locations on Fishers Island over and over again throughout the 1966-2003 period is what makes his observations so valuable for documenting trends in birds on Fishers Island.

Finally, as I have said to Pierce several times since we began this project, I am having a blast doing it. I am a bird watcher myself and submit all of my birding lists to eBird, but there is still something special to me about entering historic data so that it becomes accessible for study and analysis in eBird, rather than have it waste away on a shelf, or be forgotten in someone’s attic. I am confident that Ed Horning would be
pleased having his data as part of the eBird database.

Mr. Sepenoski is chair of the Town of Southold’s Land Preservation Committee.