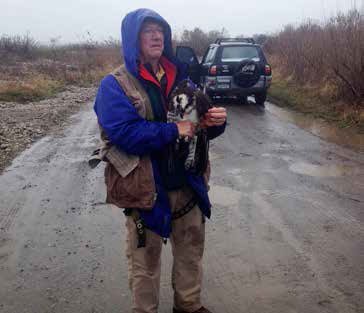 Rob Bierregaard, Research Associate of the A cademy of Natural Sciences of Drexel University in Philadelphia, returned to Fishers Island in late April at the invitation of the Henry L. Ferguson Museum. Rob’s goal was to “tag” a second male osprey on Fishers Island with a cell tower transmitter, having successfully tagged male osprey “Edwin” last May. His first tagging attempt this time around was on April 30, 2014, at Money Pond near the eastern tip of the Island. Because of the cold weather and pelting rain that day, Rob substituted decoy eggs for the three eggs that he found in the nest. The real eggs were placed in an insulated container to protect them during the trapping process. (They were promptly returned to the nest after the trapping of a male osprey at this site proved unsuccessful.) The three eggs displayed a great variety of coloration that triggered a slew of questions from HLFM Director Pierce Rafferty that in turn led to this explanatory article on… 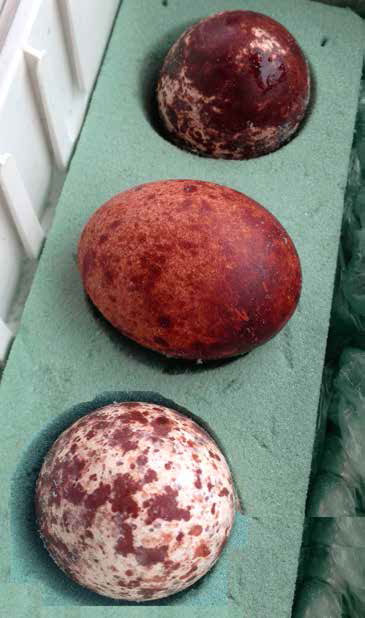 Three eggs from nest at Money Pond in insulated container, 4/30/14 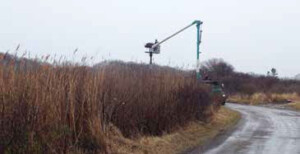 The avian egg is a wonder of the natural world. Within its confines a fertilized egg divides again and again, developing into a young bird capable of chipping its way out of the paradoxically thin but strong walls of calcium carbonate that have protected it since its mother deposited the egg in her nest.

While trapping Ospreys on Fishers Island one rather miserably wet and cold day this spring, we had a chance to hold three Osprey eggs in our hands and to marvel at the beauty of their design.

From ovary to laying, an egg’s development takes only about a day and a half, although the changes in the female that put her in condition to lay her clutch of eggs began a month or more before the eggs were laid.

Sometime in February, somewhere down in South America most likely, the female that laid the eggs we held began to feel an urge to head north to breed. The urge was triggered by some shift in her hormonal balance, the cause of which is a first-order mystery. For many birds, this change in internal chemistry is triggered by increasing day length. That makes sense for species that don’t migrate, but it cannot be the case for Ospreys, some of which winter south of the equator, where the days are getting shorter, not longer, as the new year progresses, while others winter north of the equator, where the day length indeed does get longer as spring nears.

However it began, the gradual buildup of estrogen got the bird moving north. As she neared Fishers Island, perhaps 4,000 miles and 30 days later, three eggs in her ovaries started to develop and the deposition of the yolk—full of energy-rich lipids and orange-yellow anti-oxidants that will nourish and protect the developing embryos for the 37 days it takes until the young hatch—was initiated.

When she arrived at her nest on Money Pond, she likely saw her mate from many previous breeding seasons sky-dancing high above their nest, a freshly caught fish in his talons. He would have been calling as he hovered, then diving towards the nest. He would have pitched back up and hovered again, proclaiming his desire to mate and proudly demonstrating tangible proof of his prowess as a fisherman.

This courtship increased her estrogen levels even more, and she used the fish provided by the male to deposit more yolk into the oocytes where the three egg cells rested in her ovaries.

The male, too, was coming into sexual readiness and began to copulate with the female. He would land on her back as she stood in the nest, carefully balancing as she lifted her tail and turned it off to the side. As he twisted his tail around, the two performed what ornithologists refer to, tongue firmly in cheek, as a “cloacal kiss.”

Female birds have but one uro-genital orifice through which digestive waste material is excreted, sperm enter, and eggs are laid. This orifice is called a ‘cloaca’—the Latin word for sewer, appropriately enough.

Unlike mammals, the male’s testes are deep inside his body. Sperm travel from the testes to his cloaca, where they are ready for transfer to the female. Just prior to the cloacal kiss, both the male and female evert their cloacae, so that during the brief encounter, the sperm can be transferred from his cloaca to hers. Once the copulation is complete, she retracts her cloaca and the sperm begin swimming up her oviduct.

At the other end of the oviduct, an oocyte, the capsule in the ovary that contains an egg and yolk, ruptures, and the egg and yolk package drop into the top of the oviduct. This is where fertilization takes place. The now fertile egg, sitting atop the sac of yolk passes down the oviduct, and a series of glands builds the rest of the egg.

The first job is providing egg white, which is 90% water plus some protein (mostly albumen). Then a second group of glands lays down two membranes that enclose the white and yolk—and make peeling hard-boiled eggs easy.

The next and penultimate step in the process is to make the eggshell. A gland builds the shell, mostly of calcium carbonate. The eggshell has more structure than one would suppose. There are different layers in the shell, and, most importantly, tiny pores through which the embryo breathes as it develops.

While the embryo is provided with all the water and nutrients it will need to grow, it will need oxygen for metabolism and a method to get rid of carbon dioxide. The pores in the shell permit this gaseous exchange. This eggshell forming process, by the way, is what DDT disrupted with such nearly disastrous effects on many species of birds.

The finale is to provide pigments. A normal Osprey egg is a light, creamy brownish hue, with splotches of a deep burgundy. The final set of glands is in charge of this eggshell decoration.

The whole process takes about a day and a half for a bird the size of an Osprey. When the first egg is laid, the process is repeated, usually three times for Ospreys, so the third egg might be laid four to six days after the first.

The eggs we held in our insulated carrier were a bit larger than chicken eggs and much more colorful. And they were unusually varied. One—the first in the picture—was quite typical, while the middle one was perhaps as lovely an egg as I’ve ever seen. This special egg had the normal burgundy blotches, but the background was almost a pale raspberry red. Rather stunning. When the third egg was laid, I think the female’s pigment glands went into overdrive, as almost half the egg is the deep burgundy normally seen only in blotches.

The middle egg was so different that a colleague suggested that it might have been laid by a different female. This does happen in a fair number of bird species—ducks are notorious for the behavior—but I suspect it wasn’t the case here.

When I took the eggs from the nest, they were fairly cool. That fact, along with some material on the third egg in the photo, suggests that the last egg had just been laid and that the female hadn’t really started incubating yet. That would bode well for the clutch of eggs, as the next night was a horrific one with buckets of rain, howling winds, and temperatures in the mid-to-low 40s. As I felt the house where I stayed shaking in the storm and closed a door that had blown open during the night, I thought about that female, lying down atop a 30’ pole taking the storm full on. It made me cringe.

Newly laid eggs, before incubation has begun, can withstand a lot of chilling. It’s much more damaging for an egg that has been incubated for a while to cool off. So, I suspect those eggs will be all right and will hatch sometime in early June.

We could not catch the male to give him his transmitter, but we did catch the female. We discovered by reading a wellworn bird band that she was almost 19 years old, having been banded in Waterford, CT, some 13 miles as the Osprey flies from Money Pond. In that time, I suspect she’s flown over 100,000 miles migrating back and forth between Fishers Island and South America and has weathered many a storm as nasty as that one in early May. I expect to see her and her elusive mate feeding young this spring and summer, while we follow “Charlie,” the adult male we were able to catch and tag at the other end of the island the next day.