Skip to content
Blimps on Fishers during World War II 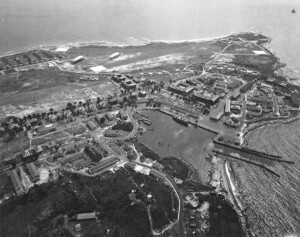 Aerial view looking south by southwest over Fort H.G. Wright’s main reservation, August 21, 1944. The photograph was taken from an altitude of 1000 feet. It provides a clear view of the Fort’s extensive facilities, barracks and buildings during the World War II era. Courtesy of NARA. Museum Collection.

Visitors to the Museum see a mounted aerial photo that shows blimps (non-rigid airships) on Elizabeth Field during World War II and many inquire about their role during that conflict. A declassified history of “Airship Utility Squadron One” provides the answers.

Airship Utility Squadron ONE, Detachment ONE-ONE was first placed in operation on 3 March 1944 at Elizabeth Field, Fishers Island, NY. This detachment was an advance base for Airship Squadron ONE, Detachment ONE, based at the U.S. Naval Air Station, South Weymouth, Mass. Detachment ONE was established originally “to assist in torpedo recovery at the Gould Island firing range and the submarine firing areas in Block Island Sound. These duties were subsequently expanded to include any blimp service, which did not require the carrying of armament. Many types of utility missions were carried out. There were observations of ships, shore facilities, ship camouflage, torpedo performances and weather phenomena. Photographs were taken of surface ships, submarines, torpedo tracks and impulse bubbles, landscapes, shell bursts, and underwater explosions. Calibrations of radar and R.D.F. (Radio Direction Finder) were carried out for naval air stations and surface ships. Assistance was given to scientific experimentation in radiation, radar blip appearances, and ordnance devices such as flares, slicks, and explosive materials. In addition, regular assignments of torpedo recovery work for ranges, submarines, and PT boats were flown. These types of assignments utilized the unusual performance characteristics of blimps and relieved the military airships of utility duties which would interfere with their regular patrol and escort missions.”

On occasion the blimps from Elizabeth Field would assist searches for survivors of plane crashes and sunken ships in the neighboring Atlantic waters. Fascinating details of the varied missions undertaken by the blimps of Detachment ONE-ONE will be included in the Museum’s spring newsletter.