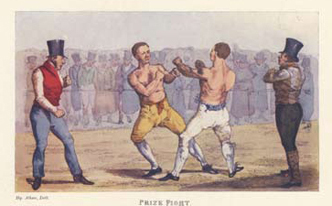 Fishers Island’s colorful boxing history begins in the late 1860s during the period when Robert Ralston Fox, a retired manufacturer, owned the island and ran it as a cattle and sheep stock farm. The entire island was his private estate for he had purchased it in toto from the last of the Winthrop owners in 1863. Mr. Fox lived with his wife, two children and household servants in the house originally known as the “West house”— later renamed the Fox Mansion house—located beyond right field of today’s ball field.

On Tuesday morning, April 9, 1867, owner Mr. Fox had every right to expect a quiet, crime-free day on his bucolic island. It was not to be. A letter written by one of his daughters in 1920 to H.L. Ferguson reveals how a prize fight entourage came crashing ashore unexpectedly without invitation or prior announcement: “A farm hand came rushing around to the front piazza to tell my father that two or three hundred men were being landed from two big schooners near North Hill. Father ordered his horse and, followed by every man on the premises, set out to investigate matters. The big field just below the Twin Hills was the scene of the action. All the women and children, too frightened to be left behind, followed on and from the Twin Hills we looked down upon the scene, one which I have never forgotten. Sentinels were on watch for an approaching steamer with officers of the law, and the affair was not one of pure enjoyment for fear of liability to arrest.”

The following account of the Fishers Island prize fight of 1867 begins as the crowds of ruffians gathered in New London
the night before the match. These excerpts are taken from a lengthy article printed in the New-York Tribune on April 10, 1867:

“On Monday evening last the citizens of the town of New-London, which lies at the head of Sound navigation, beheld, with wonder and dismay, the advent among them of about 150 roughs, of all grades, from the fashionable gambler and pick-pocket, who usually dress with sufficient care and nicety to cause mistake among the best informed people, to the low pot-house ruffian who has indelibly stamped on his forehead the indubitable evidences of crime and brutality. After dark the quiet streets of the old whaling seaport town were filled with uncouth pedestrians in rough overcoats, slouch hats, sporting caps, and shodden with heavy thicksoled shoes of the most approved English make. These individuals seemed to feel rather uncomfortable at the quiet and retirement of the place, and it soon became known to the citizens that they meditated a prize fight in the neighborhood. This caused great excitement and not a little wonder at the impudence of the roughs in coming so far for an exhibition of brute force. The hotels in town were crowded early in the evening. The supper table at the principal hotel was a picture worthy of note. A score of roughs out of their natural element, owing to the presence of napkins in the immediate vicinity of their plates, made demands in a loud manner for ‘hash,’ as they were pleased in a generic way to designate the supper in preparation for them. A few of the visages had received the decoration of black eyes, and many and well won scars gained in rough and tumble fights were visible. The beef-steak placed before them by the trembling waiter-girls, was objected to in a fashion peculiar to the roughs, who declared with unanimous voice that the animal from which the steaks were cut had been clubbed to death. The greater number of the unwelcome visitors came from New-York, with well-selected delegations from Providence, Boston, and Philadelphia, the latter city being known to in the vernacular of the roughs as ‘Philadoody.’ At three o’clock on Tuesday morning, all those who were desirous of assisting at the prize fight were awakened, and had to turn out of bed in the chilly gray air of an April morning, and attire with haste in order to secure passage on a huge lumbering schooner which had been chartered by a leading pugilist for the conveyance of the roughs to Fisher’s Island, in the Long Island Sound, distant some nine miles from the harbor of New-London…The sun is just rising in a dull blaze behind the hill of Groton, as the schooner, with her deck crowded with men, her bowsprit yawing, plunges through the water, out into the magnificent roadstead of New-London, past Fort Griswold and Trumbull on either side, with the mouths of their guns yawning; past several reefs, islets, and light-houses, and out into the deep, fresh blue water of the Sound…The schooner and two or three sloops and oyster smacks are now anchored in shore, close to Fisher’s Island…A ring is pitched near the shore, sheltered by some scanty shrubbery, on a smooth piece of ground, and the passengers disembark in yawlboats for the scene of the fight.

“Some time is lost in choosing a referee, and in the mean time the two men who are to fight arrive in the ring. The first man is George Rooke, a native of Ireland, 146 pounds weight, five feet 11 3/4 inches in height, and by trade a gunsmith, but at present a proprietor of a drinking-saloon in Providence, R.I., from whence he hails. The second man is Charles Collins, ‘The Cast Iron Man,’ as he is called by his admirers, weighs 146 pounds, is a native of England, five feet 7 inches in height, a machinist by profession, but a pugilist by inclination. Collins is 29 years of age. Johnny Lazarus and ‘Butt’ Riley of New-York act as seconds for Collins, and Maurice Phelan and the celebrated pugilist savant, Kit Burns, act in the same capacity for George Rooke. The referee chosen is Bob Corcoran of New-York, and Mike Costello acts as umpire. This fight is interesting from the fact that it is the first one ever fought in America under the newly amended rules of the prize ring, which compels the seconds to retire from the inner ring as soon as the men begin to fight in each round.

“It is 10 o’clock. The sun hangs heated over the placid waters of the Sound, whose broad bosom is flecked with many white sails, and on the neighboring hills…Both men advance to the center of the ring and shake hands, the seconds following the example with fraternal grasps. They cover their bare breasts with their clenched hands glaring like devils into each other’s eyes with sudden animosity and hate, watching with keen interest for an opportunity to strike, and in a moment the bloody and brutal work begins.

“The ‘Cast Iron Man’ receives two terrific blows on the face from Rooke, administered with his right and left hands; a clench ensues in a moment, and the men are locked in each other’s arms, struggling like tigers, and Collins is thrown again heavily by Rooke, who laughs like a child who has gotten a toy, Rooke rising from the prostrate body of his antagonist and walking to his corner, while Collins is lifted with care and tenderness by his watchful seconds.

“Thus ends the first round. The second round is a repetition of the first, Collins being thrown again heavily by Rooke. In the third round, Collins dashes his cast iron head with the force of a catapult in the stomach of Rooke, who drives his right fist repeatedly into the face of his enemy with the weight of a sledge hammer, at which the ruffians around the ring yell with energy…Mr. Fox, the owner of the island, sits on his horse and calmly views the spectacle, smoking a Havana the while, for which he receives congratulations from the roughs, pick-pockets and thieves. Some of the rounds last as long as 10 minutes and the 13th round is 18 minutes in duration…All the while, a perfect torrent of blasphemy, obscenity, blackguardism, and ribaldry pours from the lips of the loafers who can hardly control themselves, two or three throwing their hats on the ground and jumping on them with excitement.”

The Tribune’s account chronicled in excruciating detail just how savagely George Rooke pummeled the “Cast Iron Man” until his face looked “more like a raw piece of liver or beef-steak slashed with a knife, than the face of a human being.” The latter fighter had “nearly lost all his ferruginous ingredients” and Rooke’s victory seemed a foregone conclusion: “The eyes of Collins are now nearly closed, and should he keep on fighting a few rounds more he will be unable to see from the effects of the terrible blows which come like rain from the younger and more active Rooke. Rooke has been punished badly in his ribs, but does not show a mark, owing to his splendid training. Up to the 16th round there is constant and bloody fighting going on all the time, and in two rounds there is a clinch at the ropes, and both men go down heavily, Collins under. As Rooke seeks to rise he places his right hand, which is open, on the face of Collins, but does not strike him, when a cry of foul is raised in Collins’s corner, and the ring being broken, the referee decides that Rooke has given a foul blow, which so enrages Rooke that he makes at the referee, Corcoran, and cries out in a frantic voice, ‘I will kill you, you ___,’ but is taken away by his friends, and the prize fight is ended, to the great dissatisfaction of about 250 brutes, whose appetite was just beginning to kindle for more blood. The fight lasted for one hour and 15 minutes. It was fought for $500 a side.”

So the Cast Iron man, badly punished and all but finished off, won Fishers Island’s first prize fight in the 16th round over an unmarked George Rooke as a result of a highly questionable “foul” call. The umpire decided that Rooke struck Collins when down and therefore lost the match. While the sporting press generally railed at the outcome, the Brooklyn Eagle chose a humorous approach in its review of the fight’s ending: “This most foul, strange and unnatural proceeding put $500 in the pocket of the Cast Iron Man whose frightfully damaged proboscis and ‘peepers’ needed some pecuniary or other healing application.” Later accounts of the fight stated flatly that the “fix” had been in from the start.