We are delighted that Jack Schneider has become our Land Trust Stewardship Coordinator. Jack came to us early this year with a wealth of experience in planning, project management, budgeting, fundraising, and communications. He was animal curator at The Maritime Aquarium at Norwalk, Mystic Aquarium, and The Oklahoma City Zoo. As director of education at The Maritime Aquarium, Jack developed programs and systems from the ground up. The Board believes that Jack is the ideal person to help us continue to develop and expandsolid programs and systems for the stewardship of our sanctuary areas.

Jack will be working with me and other members of the Land Trust Committee to protect and enhance the environmental value of our approximately 350 acres of Land Trust properties. The Land Trust Committee currently consists of Donnie Beck, David Burnham, Ken Edwards, Jeff Edwards, Justine Kibbe, Steve Malinowski, Elizabeth McCance, Terry McNamara, Bob Miller, Pierce Rafferty, Scott Reid, Megan Raymond, Jack Schneider, and Joe Woolston. We would welcome the assistance of volunteers on a number of stewardship endeavors. A list of these stewardship projects can be found at the bottom of page four of this newsletter.

While on the subject of stewardship, it may seem that the lush grassland so many enjoy at Middle Farms during the summer has always existed and requires little maintenance. Unfortunately, this is not the case. Grasslands tend to transform themselves into shrublands, then forests. When the Museum assumed ownership of this property—which included at least five and potentially as many as ten building sites—Block Island Sound was not visible from the main road. Maples and gum trees up to 30 feet in height and 6 inches in diameter extended completely across the flats. The trees were cleared by Otis Horn and Museum volunteers. The current management plan calls for burning and, if necessary, mowing one-third every three years to control woody growth, while allowing the sides of the flats to the east and west to transition to brush and trees for a diversity of habitat. 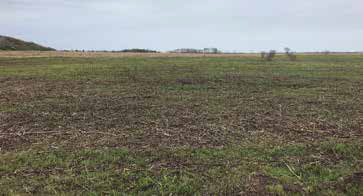 This year the central section of the flats was burned by our volunteer fire department. Because it had developed very dense and heavy woody growth, it was necessary to mow the entire area after burning. I did most of this in early May with my 1949 Ford tractor, before ground-and brush-nesting birds had settled in. Mowing for hours on end is not exciting, but it is not unpleasant. The tractor engine hums, and one can get lost in its drone as the surface of the land reveals itself in 5-foot swaths. It is a bit like a long voyage on a boat, which is appropriate because the amount of standing water this year was, I think, unprecedented. The outlet from Middle Farms Pond was a rushing stream. The areas to the east and southeast of the driving range contained vernal ponds up to 18 inches deep. Ducks, yellowlegs, and smaller sandpipers were present, perhaps nesting. Woodcock flushed from the drier (but still moist) areas. 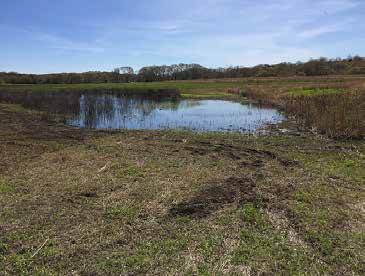 There are what seem to be the beginnings of sinkholes where water has stood for long enough to seep through the topsoil to the better-drained glacial till below. Areas where topsoil was excavated many years ago—why and by whom unknown—have subsided considerably relative to the undisturbed grade. Vestiges of old roads or driftways—perhaps from horse-drawn wagons used in farming or to gather firewood—traverse the area.

If you are on the Island in late spring or early summer, you will find portions of our trails through the flats very wet and perhaps impassible, but the cleared portion provides an opportunity to walk, to view unusual birds, and to seek clues of the history of the area. Also, the clearing has uncovered many golf balls that have strayed from the driving range—we would be grateful if they could be collected and reused or, if they are not in good condition, removed. By the end of June, the water will recede; all paths should be walkable, and the native grasses—bluestem, switchgrass, Indian grass—and other flora will cover all this.