It may come as a surprise to many that for much of its fabled history Fishers Island was an absentee-owned rental property. From the mid-1600s until the early 1810s, successive generations of island-owning Winthrops more often than not rented out all of Fishers Island to lessees as one undivided property, often throwing in the surrounding “hammocks”—South and North Dumpling and Flat Hummock—as extras. The lessees worked the island as a stock farm or dairy, or brought in their own subtenants to do the farming. 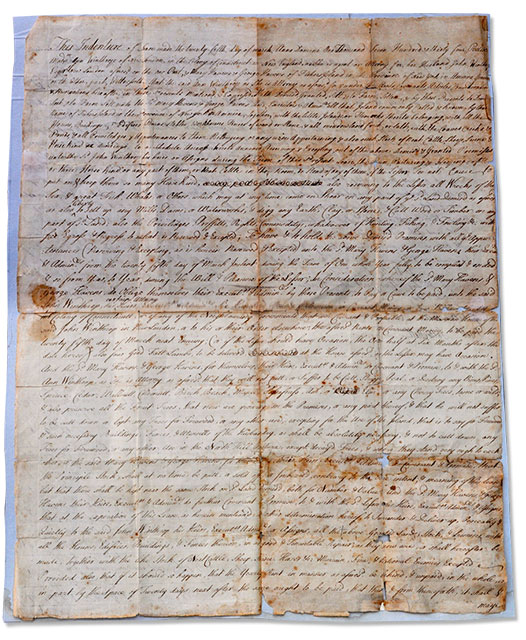 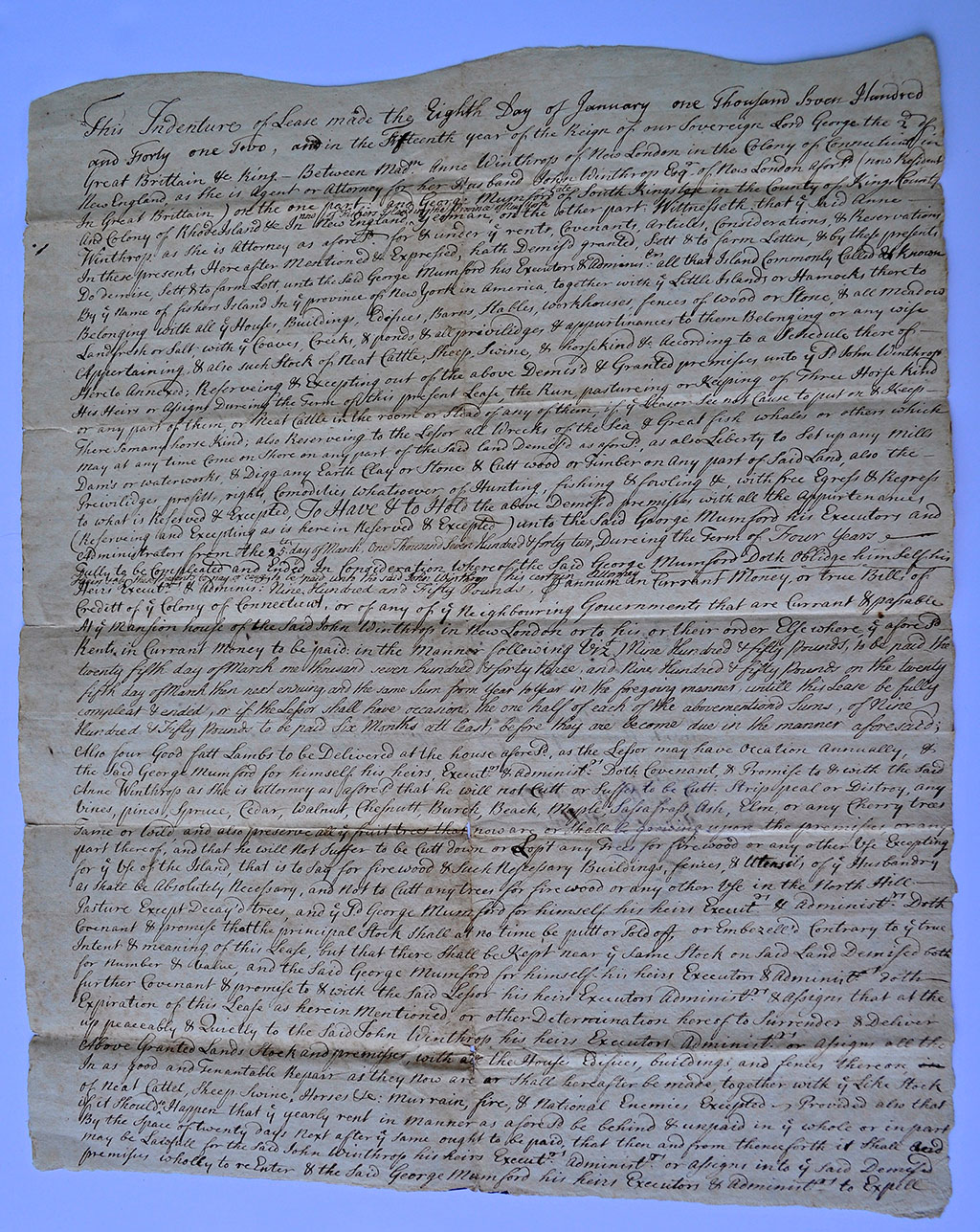 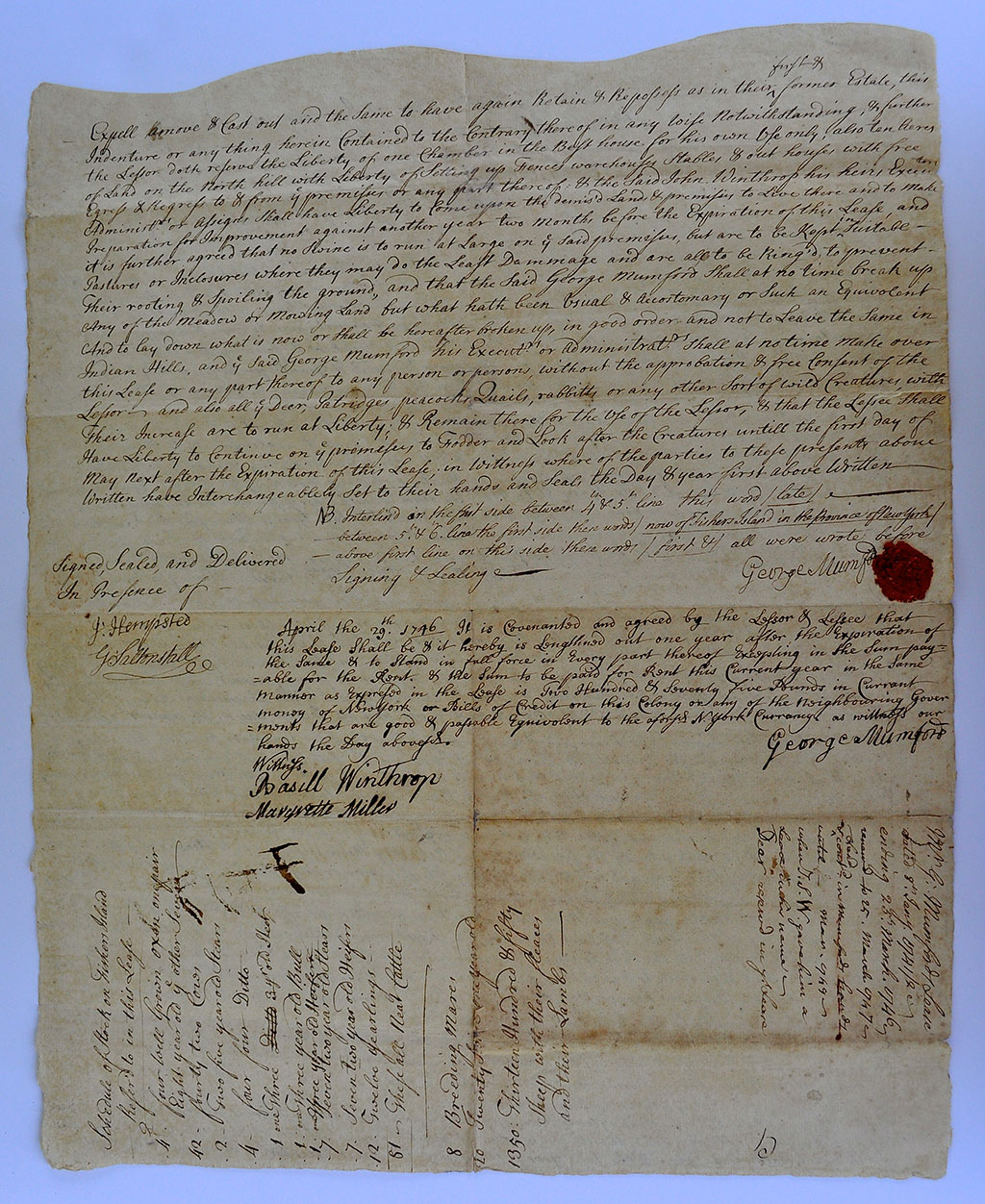 This one-year lease sheds light on how the Winthrop family managed their Fishers Island property as absentee owners and features a fascinating mixture of rights and restrictions. For the sum of 600 pounds per annum, Mary and George Havens received the use of “all the Houses, Buildings, Edifices, Barns, Stables, Workhouses, Fences of wood or Stone & all meadowland fresh or Salt, with, the Coaves Creeks & Ponds, & all Priviledges…& also such Stock of Neat [domesticated] Cattle, Sheep, Swine & Horse kind.” The lease documents that 81 Fishers Island oxen and cattle resided on the Island at the time of signing, including a pair of oxen, 42 cows and a mixture of young steers, bulls and heifers. There were eight breeding mares and 20 swine, as well as 1,350 sheep “with their Fleeces & their Lambs.” The Havens family, as Lessees, had the right to farm the island and profit from crops, dairy products, wool, and livestock, returning at the end of the lease period the livestock of the same number and value as they had received at the beginning.

Along with the lessees’ rights and privileges were a variety of restrictions that guaranteed the Lessor and his assignees ongoing access to parts of the Island and offered them several ways to receive additional income. These restrictions included the Lessor’s claim to “all Wrecks of the Sea, & Great Fish, Whales or Others, which may at any time come on Shoar.” The Lessor also reserved “the liberty to sett up any Mills, Dams, or Waterworks, & Digg any Earth, Clay or Stone, & Cull Wood or Timber on any part sd. Land; also the priviledges, Proffitts, Rights, Commoditys, whatsoever of Hunting, Fishing, & Fowling &c with free Egress & Regress to what is Reserved & Excepted.” The lessees were forbidden to “Cutt, or Suffer to be Cutt, Stripp, Peal, or Destroy any Vines, Pines, Spruce, Cedar, Walnutt, Chesnutt, Birch, Beach, Maple, Sassafrass, Ash, or Elm, or any Cherry Trees, tame or wild.” They could only cut trees for firewood used on island and for repairing fences, buildings “& Utensills of the Husbandry.” The lease made quite clear that poaching was forbidden, stating that “all the Deer, Partridges, Peacocks, Quails, Rabbitts, or any other sort of wild Creatures with their increase are to Run at liberty, & remain there for the use of the Lessor.” As for a place to stay while visiting, “the lessor doth reserve the liberty of One Chamber in the best House for his own use only” keeping also “Ten Acres of Land on the North Hill, with Liberty of setting up Fences, Warehouses, Stables, & Outhouses…” A small number of horses and cattle were to be kept in this North Hill enclave for use by the Lessor and assignees.

In early May 2014, the Museum obtained a second Colonial-era lease for Fishers Island from the same rare document dealer. Dated January 8, 1741/2, this lease was between Madam Ann Winthrop of New London (acting once again as agent for her absent husband) and lessee George Mumford “late of South Kingston in the County of Kings County now of Fishers Island in the Province of New York.”

Please note that George Mumford has received considerable attention in recent decades as the owner on Fishers Island of African slave Venture Smith whose narrated life story was first published in 1798. The 1741/2 lease was “signed, sealed, delivered” by George Mumford in the presence of Joshua Hempsted, celebrated Colonial-era diarist, and Gurdon Saltonstall, Jr., minister of New London and son of the former governor of Connecticut. The lease ran for four years at the price of 950 pounds per annum—an almost 40% hike over the 1734 rent! Added to the bottom of the document was a signed one year extension for the year beginning April 29, 1746 at the discounted price of 275 pounds per annum. The signers of the extension were George Mumford and two of John and Ann Winthrop’s children: Basill Winthrop and Margaret Miller.

Most of the rights and restrictions in this second lease were similar to those in the 1734 lease, but the nonpayment clause was much harsher. The Winthrop owners detailed how delinquent tenants could be expelled, removed, and cast out if the rent was just twenty days past due.