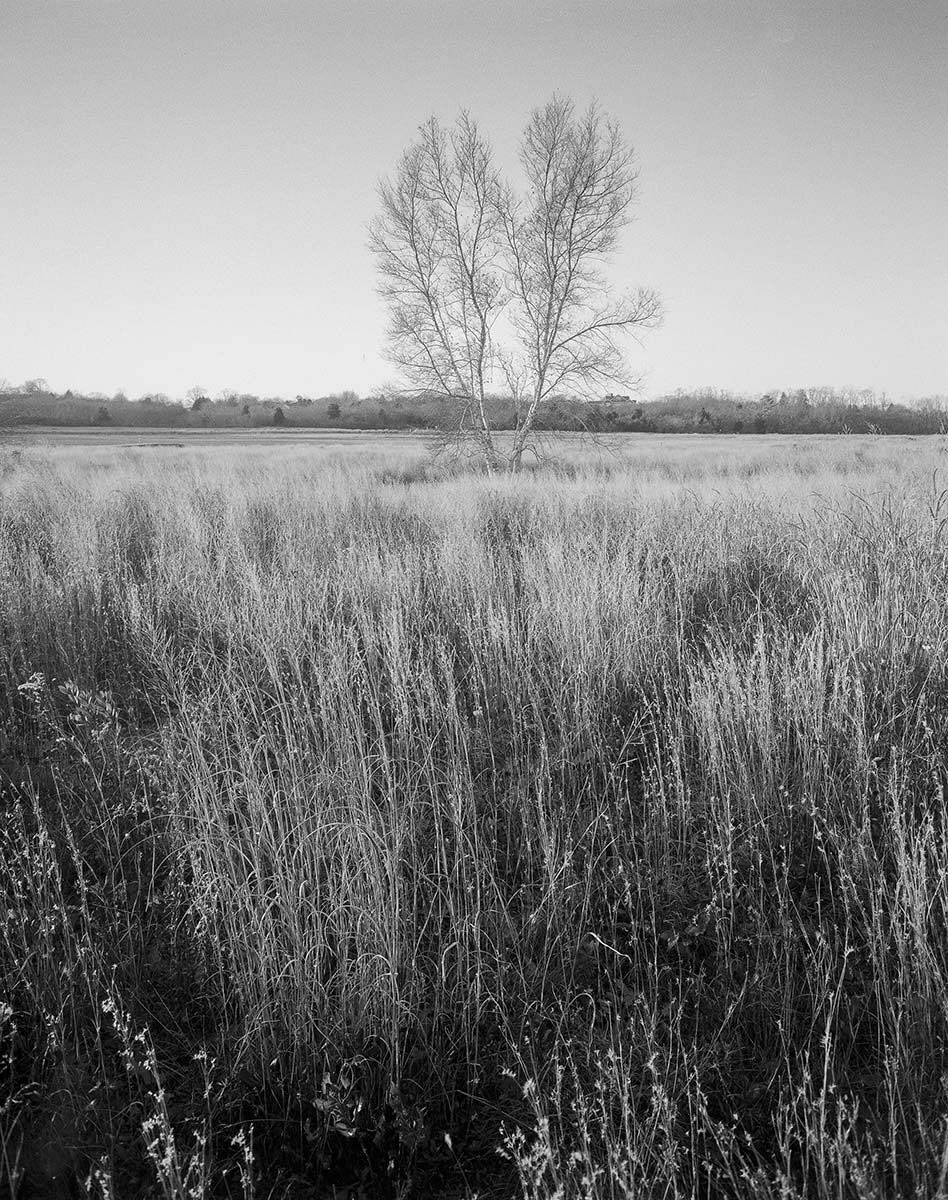 On an island that little more than 100 years ago was primarily pasture, there are only two large grasslands still extant. The first is located on former Fort H.G. Wright property south of Whistler Avenue. The Fishers Island Conservancy has restored as meadow approximately 100+ acres at that site under an operating agreement with the Fishers Island Ferry District. The second is an approximately 40 acre section of former farmland on Middle Farms Flats near today’s Driving Range that is owned and managed by the Museum. These maritime grasslands, increasingly rare in our overdeveloped world, provide critical habitat for rare plants and animals. They have earned a “highest ecological significance” ranking from conservationists and environmental scientists. Both the former Fort property and the former mid-island farm fields are maintained as grasslands by annual prescribed fires that are planned and coordinated with government agencies and the Fishers Island Fire Department. These “burns,” along with frequent mowing, are necessary to keep the grasslands from being initially overrun by woody shrubs and eventually reverting to successional forest.

An ongoing battle is also being waged by both the Conservancy and the Museum’s Land Trust against invasive plants that outcompete native grasses and threaten habitat diversity. 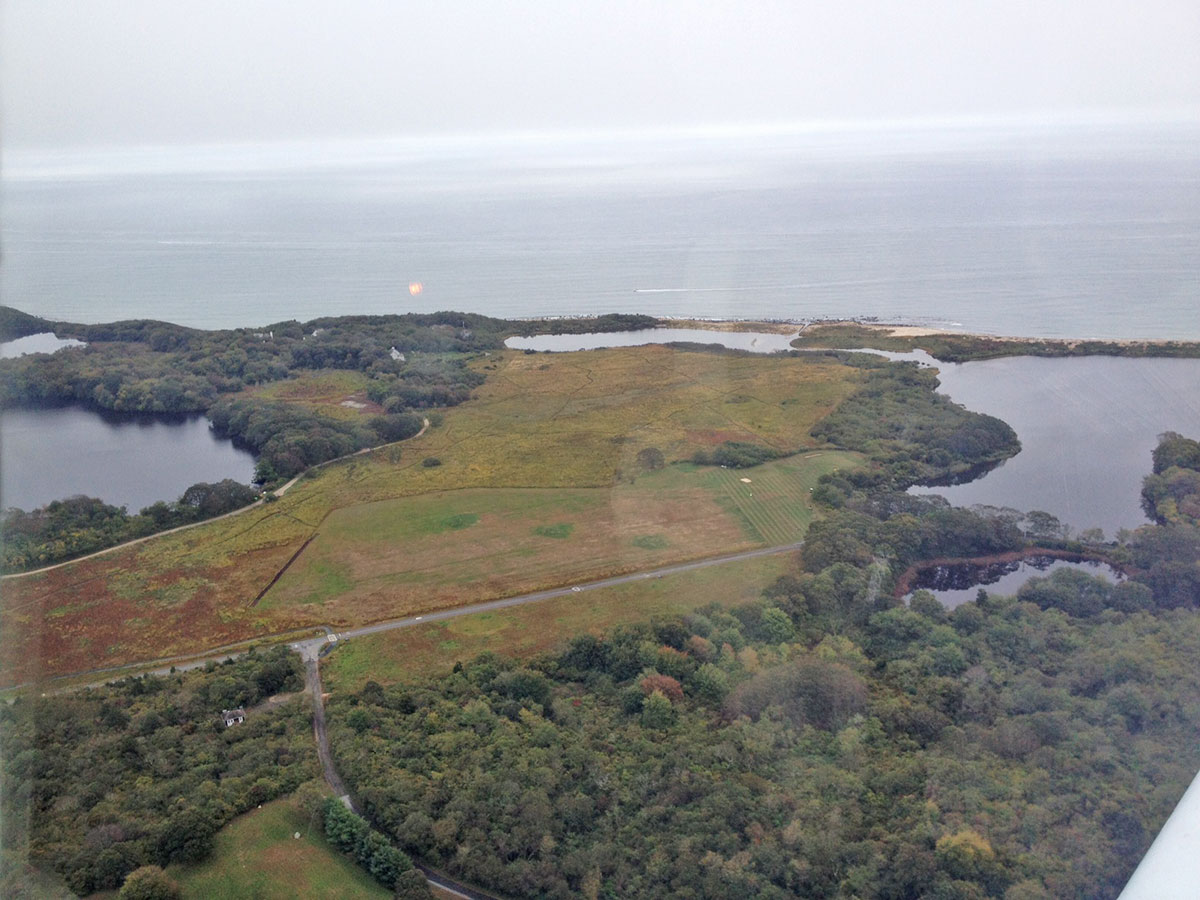 Ringing the Land Trust grassland in mid-island are Middle Farms Pond (at left with Treasure Pond beyond), Beach Pond (straight ahead), Island Pond (at right), and the corner of Perch Pond (lower right).

The Sanctuary is surrounded by a variety of habitats, including these fresh and brackish ponds, and shrublands. The Sanctuary supports freshwater wetlands as well as an intermittent fresh water channel outflowing from Middle Farms Pond into Island Pond.

All these factors combine to create a multitude of “ecotones” (a region of transition between two biological communities) that promulgate diversity of flora and fauna. “Ecotones between two habitats are often richer in species than either.” Quote from Oxford Languages. 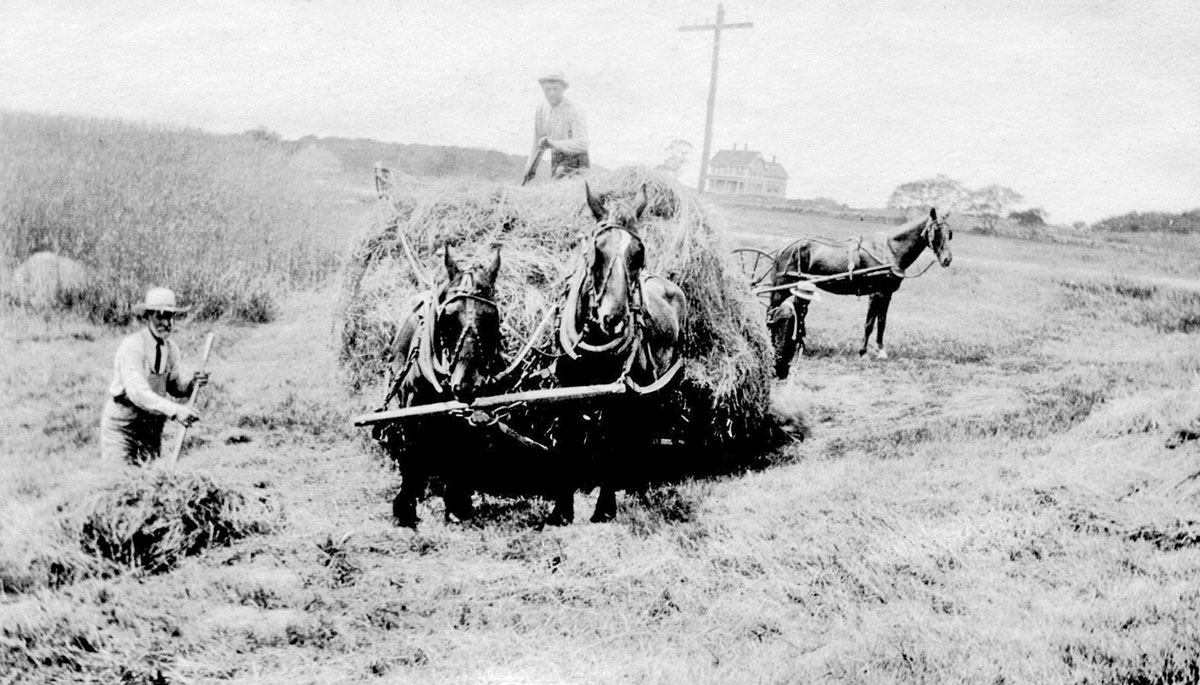 This photograph captures one aspect of past farming activities on what is today the Matty Matthiessen Wildlife Sanctuary, Middle Farms. 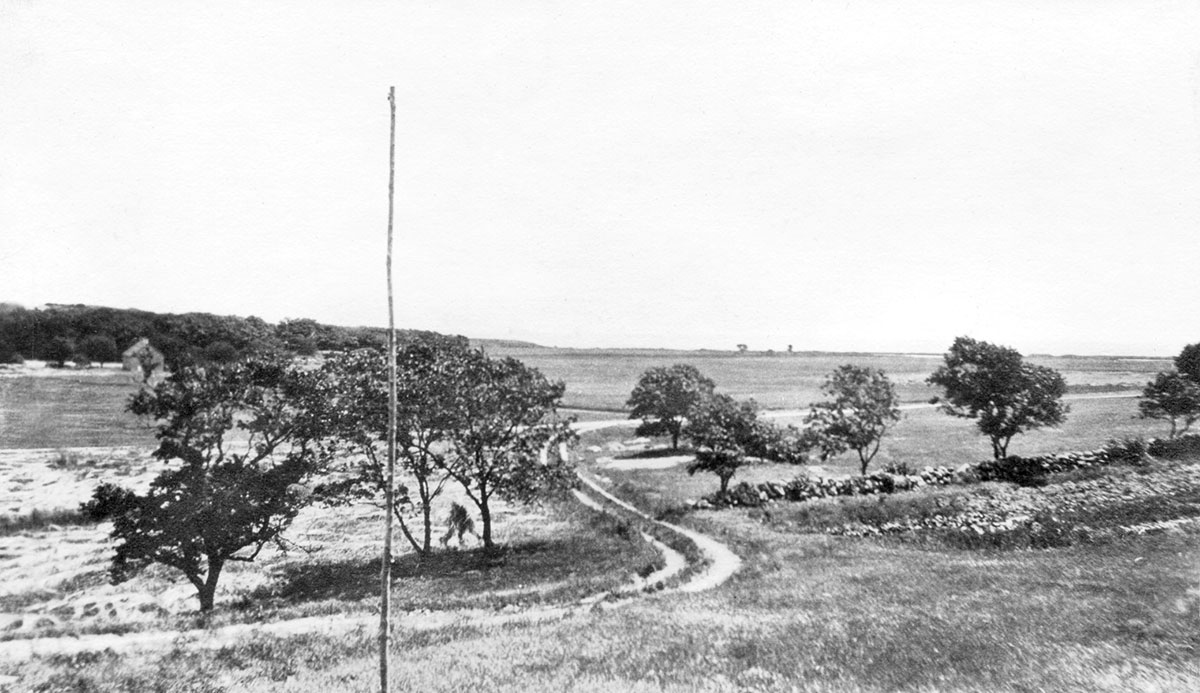 Looking toward Long Island from the Middle Farms Dwelling (Bohlen house), circa 1920

This vista would be blocked by trees today were it not for ongoing maintenance that preserves critical maritime grassland habitat. Each year a “Burn Plan” for approximately one third of the grassland at Middle Farms is submitted for approval to the Supervising Forester, Division of Lands and Forests, NYS DEC. Once approved, a date is coordinated with the Fishers Island Fire Department when wind and moisture conditions are favorable, and when birds aren’t nesting. 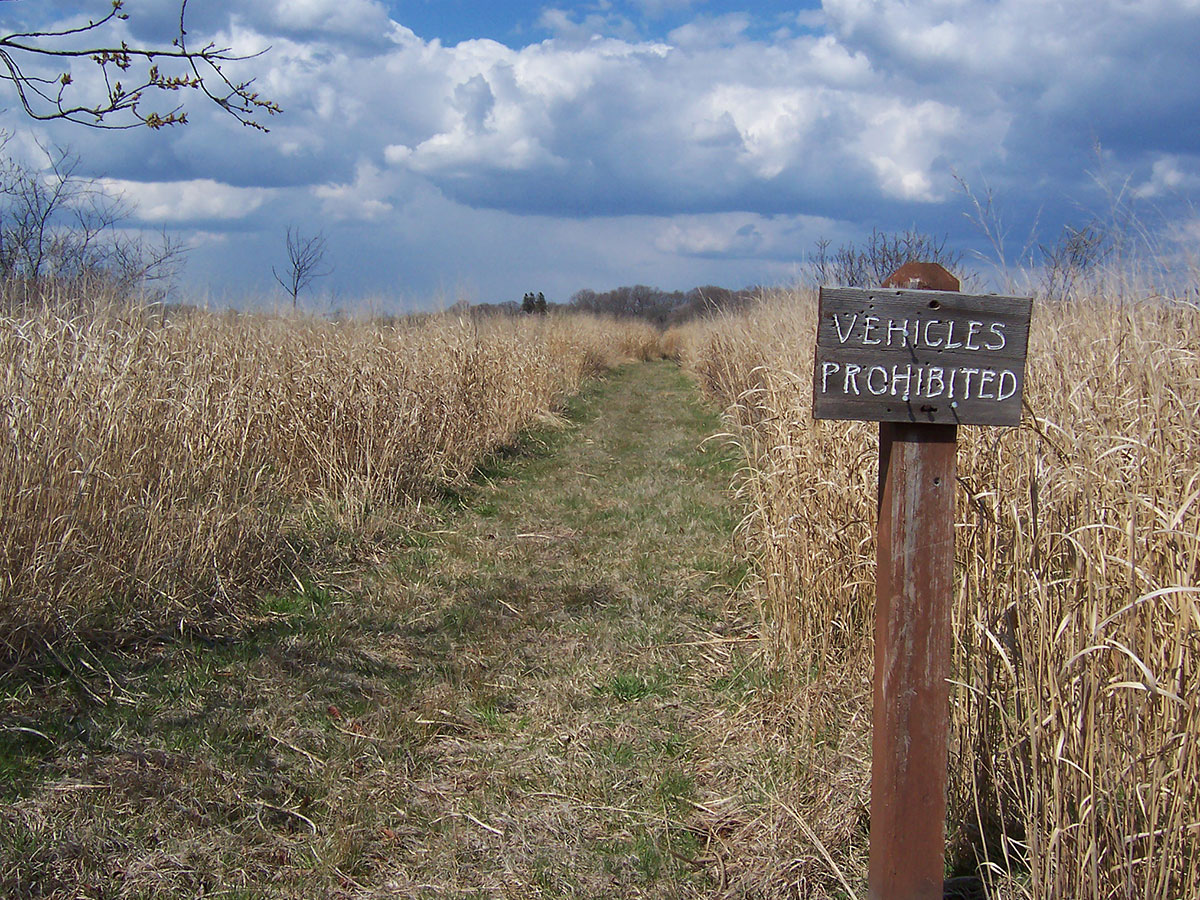 Trails wind through the Matty Matthiessen Sanctuary allowing visitors to closely observe flora and fauna, on foot only. 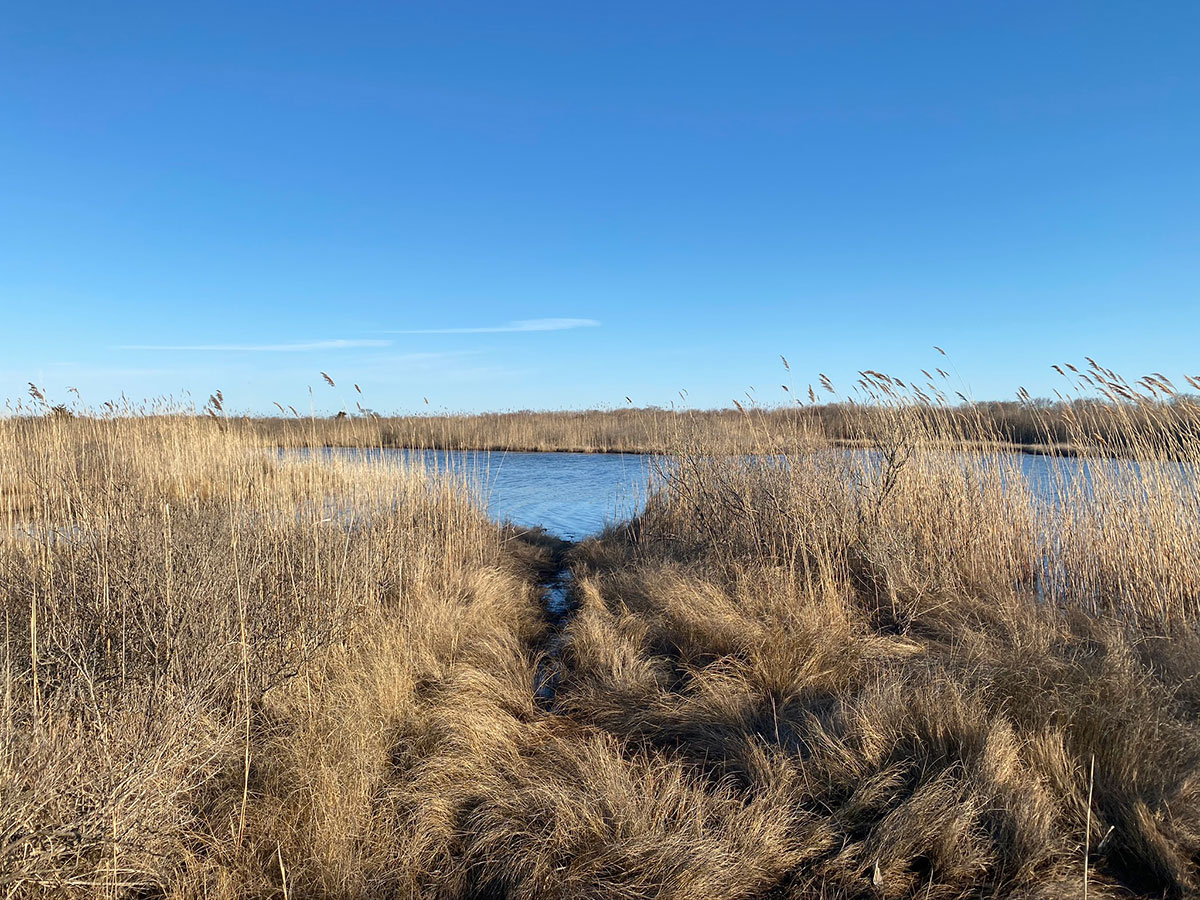 Combinations of water and grassland vistas abound in the southern section of the Sanctuary. The channel to Beach Pond from Island Pond The Museum is grateful for all the dedicated help provided by Fishers Island School students, Board members and volunteers who assist in the maintenance of Land Trust properties. Beginning in the fall of 2010, the Fishers Island Conservancy began an ambitious project to convert a large section of the former military property at the western tip of Fishers Island into grassland meadows. This restored grassland area, crisscossed by paths, is known today as “the Parade Grounds.”

Dress Parade on Parade Grounds, circa 1913

This vintage view of the Parade Grounds illustrates its original function. When the Fishers Island Conservancy began their restoration project, the Parade Grounds had been, in the words of a Habitat Committee report, “choked with vines and scrub and depleted of wildlife.” Extensive efforts were untertaken to clear the property of invasive plants and to reseed grasses. This photo shows a section of the Parade Grounds after a managed burn by the FIFD in the spring of 2011. The success of the clearing and the reseeding was soon apparent: “Milkweed for butterflies, wild iris, native warm season grasses and cool season grasses are seen in the ‘After’ picture above, providing a sustainable multi-culture grassland habitat for nature’s creatures.” Quote and photo from Habitat Committee Report, 2012.

Looking from the Parade Grounds to Officers Row Controlled burn at the Parade Grounds The Parade Grounds are today a thriving ecosystem with native plants attracting insects that support a wide range of other interdependent floral and faunal species. A network of walking paths allows visitors to experience the meadow restoration and the diversity of the natural world on display. Spiderweb on the Parade Grounds Grasses on the Parade Grounds