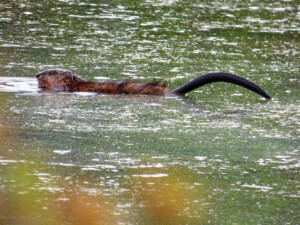 The muskrat may be the most common semi-aquatic mammal on Fishers Island, yet it is rarely observed.

The first reaction you may have when encountering a muskrat is to identify it as a large rat. A well-fed mature adult can reach almost four pounds in weight, and a healthy adult is similar in size to a New York City subway rat. But, if the body is visible, even a cursory examination shows distinct differences. The muskrat has a brown, rounded body about 12 inches in length with a tail equal in length to the body. The tail is scaled with straight vertical sides. The rear feet are much larger than the front feet, and both are partially webbed with prominent claws. Despite their abundance, muskrats are difficult to observe, as they are principally nocturnal. They do not have good vision, hearing, or an acute sense of smell, so muskrats’ primary defense strategy is concealment. Muskrats are very vulnerable when on land and completely at home in the water, able to remain submerged for up to 17 minutes. Their mouths have flaps behind the teeth that enable them to chew on plants while underwater. They spend most of the day in dens, burrows, and tunnels or in well-hidden eating areas in marshes and ponds. They even mate in the water. They are usually seen swimming, with only the top of the head and eyes visible. Their appearance is similar to an otter or a beaver, but noticeably smaller. The rudder-like tail is then the most distinguishing characteristic. 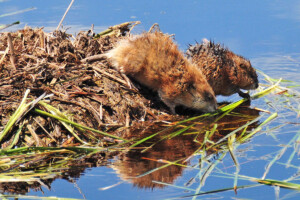 A muskrat’s presence is often indicated by a conical mound of vegetation with an underwater entrance, resembling a beaver lodge within a marsh. These dens can be observed in the marshes on the Fishers Island Club’s golf course. The repetitive movements of swimming muskrats create narrow underwater trails in shallow water, so look for such trails as evidence of muskrat habitation. Another sign that muskrats reside in an area is the strong musky odor that they exude to mark their breeding territories. This powerful smell gives other muskrats information about the current residents; it may serve as a warning or an invitation.

Generally, monogamous pairs occupy a breeding area and exclude other adult muskrats through scent marking and hostile behavior. Contact between the pair is limited to mating. Like their relatives, voles and lemmings, they are prolific breeders. Under favorable conditions, litters of 5-7 kits will be born three times a year. The young can swim and feed at two weeks and are fully independent at six weeks. Within a year’s time, they have moved off to secure their own area. Although muskrats have great reproductive potential, they have a short life span. In the wild, a typical muskrat lives only one year. Some rare individuals have been documented surviving as long as four years.

Muskrats are solitary most of the year, coming together only to mate during breeding season. During harsh winters several individuals have been observed sharing dens for warmth, as they do not hibernate. The overall social structure is semicolonial with monogamous pairs occupying home ranges that serve as breeding territories.

The muskrat is a voracious feeder year round. A typical home range is 100 to 150 feet in diameter, and most activity, including feeding, takes place within the central half of the area. Muskrats’ diet consists principally of vegetation like cattails, sedges, rushes, and water lilies, with opportunistic prey like clams, mussels, frogs, and even slow-moving fish providing additional nutrition. There are usually 1-25 individuals per acre.

As population density increases, food becomes scarcer and the parents’ home range expands, forcing the young into less safe areas. This abundance of easy prey causes the number of predators to increase as well. Eventually, vegetation is unable to regenerate quickly enough to keep pace with consumption. The shortage of food and increased predator population, coupled with hemorrhagic disease and parasites, cause the number of muskrats to rapidly plummet to a few individuals. The population of predators crashes as well. These crashes allow the marsh or pond to regenerate. After some time, as the vegetation flourishes, the number of muskrats begins to increase, followed by the predator population, and so it continues. The result is a natural population cycle of about 8-10 years, much like the one made famous by the muskrat’s lemming cousins. 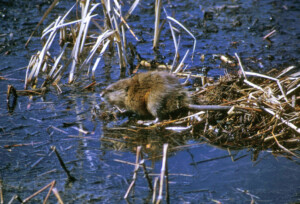 You may be fortunate enough to see a muskrat swimming in one of the ponds or coves this year; an Islander sighted one in Island Pond in January. The observer did not report tail slapping or chirping by the muskrat to alert his mate of an intruder’s presence. It is likely, however, that there are many more muskrats in the area.

Many people are familiar with muskrats as the providers of fur for hats and coats, but the animal’s appearance in the flesh is a mystery to most. Hopefully you’ll be lucky enough to see one of these remarkable animals in the wild here on Fishers.