After purchasing the western tip of Fishers Island for fortification purposes in September 1898, one of the U.S. Government’s first tasks was to create a landing dock for supplies. Silver Eel Pond drew immediate attention as a favored site. A letter to the Chief of Engineers, dated December 13, 1898, revealed the pond’s advantages: “The necessity for the work arises from the fact that there is no landing of any character on the Government Reservation, and none on the island at all, which is practicable for landing materials for the work. Cutting into Silver Eel Pond is proposed, because it is not only cheaper than to build a dock out into the Sound, but affords a perfectly land-locked harbor in which vessels can lie and discharge in any weather.”

After receiving the go ahead from Washington, labor crews began preliminary cuts to open Silver Eel Pond in December 1898. The channel was fully dredged in February 1899. The following newspaper article was published in the Naugatuck Daily News on March 23, 1899:

Salt Water Drives Them from Famous Pond at Fisher’s Island.
New Haven, March 23.— The Famous silver eels of Fisher’s Island will soon be no more. Silver Eel pond is known to most fishermen and sportsmen in this vicinity. It is located on this side of Fisher’s Island some way back of the Munnatawket house.

It is quite a large body of water and a peculiar kind of eels have made their home in it. Silver eels are long and thin, with a white stripe running underneath. They are not better eating, although some persons prefer them to the regular salt water eels.

Since the government began to build fortifications on the island many changes have been made. Among other things a channel has been cut about 70 feet wide from the sound into Silver Eel pond, a distance of perhaps 70 feet. Then a wharf was built at one side of the pond. The bank was abrupt, and little work was required to make a wharf with 12 feet of water. The pond was dredged so it affords a fine harbor and landing place for boats bringing supplies and materials for government work.

The tapping of the sea salt water into the brackish waters of Silver Eel pond, and the silver striped inmates could not stand the change. Some sought to escape by way of the channel, others remained. A fisherman crossing the pond lately saw dozens of eels lying at the bottom with their silver stripes uppermost, showing that they were dead. Other fishermen, spearing for eels in Little Hay harbor, have brought up silver eels from out of the mud or in dying condition. They no doubt were some of the number which had left the pond by way of the channel and had dug into the mud to escape the briny waters of the sound. 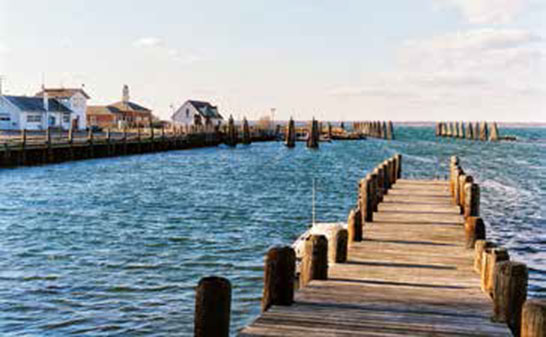 Looking past dock on Silver Eel Cove to the Sound opening, circa 2001. 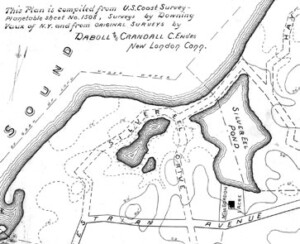 Detail of Plan Showing Section of the West End of Fishers Island, N.Y., c. 1897. Note the ponds to the west of Silver Eel Pond. The Government later filled them in with displaced earth from emplacement construction. The named roads were never built as shown.