by Pierce Rafferty
May 2013 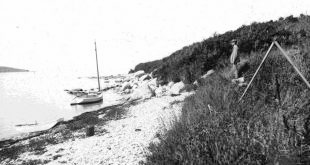 A lengthy New York Times article, published on July 13, 1880, reviewed the new resort on Fishers Island. While the unidentified reporter appeared somewhat ambivalent about the place, calling it pleasant but “desolate in the first degree,” he appeared quite taken by a local character named “Uncle Billy” who became the focus of his piece. The man of interest was a full-fledged hermit who had resided on South Dumpling Island for many years, but was living on a small boat anchored off Fishers Island at the time the article was written. The hermit’s formal name was William Holland, but he was called “Uncle Billy” by all. The reporter described him thusly:

“‘Uncle Billy’ Holland is the most renowned of the inhabitants [of Fisher’s Island]. He is well known the length of the Sound and might be said to be the original of the famous ‘Lone Fisherman,’ as he is the exact representative of his prototype on the stage. Rather below the medium height, a face running wild with wrinkles and black with exposure, surrounded by a white ring of whiskers, and out of all, from under an old sou’wester, peer a pair of white eyes, the expression of which defies all description.“

The hermit had once been a successful seafarer, but “trouble” of some non-defined type had rattled his mind and caused him to re-treat to unoccupied South Dumpling, just off Fishers Island’s north shore. Liked by all, “Uncle Billy” made his livelihood selling lobsters and taking small groups out to fish for blackfish in the surrounding waters. His one and only flaw was a major one: he exhibited the tendencies associated with acute paranoia. The reporter summarized the problem: “His weakness is displayed principally in his fear of being poisoned, and if for any reason he takes a grudge against a man, that man is sure to be accused of trying to poison him; consequently, not a few of the inhabitants of the island are murderers in the eyes of the old hermit. On the little [South] Dumpling are the remains of two houses built by him, and destroyed by his own hands. ‘I had a fine place there,’ he said, as we stood over the ruins one day, ‘but that ‘ere keeper of the big Dumplin’ [North Dumpling Light] tried to poison me: what he did it for I can’t imagine… but he came over one day and put arsenic in the food; for 10 days I laid on the floor and didn’t move or eat a thing.’ ‘Wasn’t something else the matter with you, Uncle Billy?’ his visitor asked. ‘No-o-o; I proved it by the crows. After I got up I threw away the rest of the stuff, and the crows came and ate it up, and the next day here was a dead one and there was a dead one, and the whole Dumplin’ was full of dead crows. You see that proved it. Why, they even put poison on the roof, and I had to burn the whole thing down. I wouldn’t have anything to do with it.’ So it was he burned his two houses, a large net that he thought was poisoned, and a boat, and left the island. No better sailor or more cunning fisherman can be found than ‘Uncle Billy,’ and, as he says, the fish all seem to know him.”

The Hartford Weekly Times of March 31, 1887 provides details of the hermit’s demise: “’Uncle Billy’ Holland, who is well known along the Sound from New London to New Haven was drowned at Fisher’s Island Monday night. He had gone to the island with two passengers, and probably missed his way and fell off the wharf. He formerly lived on a hummock in Fisher’s Island Sound, but believing that the well on the little sand heap had been poisoned he had latterly made his house in a little fishing boat that he owned. He had accumulated property.” At least it wasn’t poison.

This spring, Pierce Rafferty wrote an engaging article for the Fog Horn about William Holland better known as “Uncle Billy,” the hermit who lived on South Dumpling in the late 1800s. He was known on the Sound from New London to New Haven as “The Lone Fisherman.” Pierce found an obituary in the March 31, 1887 edition of The Hartford Weekly Times that reported that he had drowned off of Fishers Island. Mélie Spofford read Pierce’s article and thought that William Holland might be buried in the Fishers Island Cemetery, since there are a number of drowning victims in the cemetery next to St. John’s Church, most of whom are marked in the cemetery records as “unknown.” She found William Holland’s name neatly written in the Cemetery Log on March 28, 1887 with cause of death listed as drowning. William Holland’s name is clearly written on the cemetery map as well, but there is no headstone marking his grave. Pierce and Mélie think it appropriate that his grave be marked with a small headstone and would welcome any contributions to this effort. If you are interested in making a donation, please make out a check to St. John’s Cemetery Fund and mail it to The Fishers Island Cemetery at PO Box 384, Fishers Island, N.Y. 06390. Enclose a note saying the contribution is for the purchase of a headstone for William Holland, The Hermit of South Dumpling. Donations are tax deductible.