While researching an April theme for this article, I began to write about the wreck of the rum-runner Thelma Phoebe in April of 1923. However, my wife Vicki suggested that Easter themes of rabbits and lambs might provide a cheerier alternative to the tale of a booze-laden wreck. That suggestion in turn led me to review the rise and fall of sheep on Fishers Island. 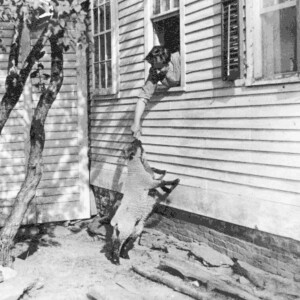 Historically, sheep were a major component of our island’s farms from the first decades following settlement in the 1640s through the first quarter of the 20th century. When Fishers Island became a manor in 1668, the Winthrop owners were required to send a payment of “one lambe” each spring to the reigning English King or Queen. While the token lamb was intended to serve as proof of manorial fealty, the records are unclear as to how many were actually sent. In any case, during the Revolutionary War and the War of 1812, the British got more than enough lambs to make up for any shortfall by plundering the island’s farms and seizing sheep along with other livestock. Wool remained a primary Fishers Island export even as the Winthrop farms began to decline in the decades following the War of 1812. When Robert Fox bought the island and its largely abandoned farms in 1863, he reintroduced sheep on a massive scale. Fox-family records indicate that they maintained flocks on Fishers Island totaling up to 2,400 sheep.

After Mr. Fox died in 1871, the sheep once again all but disappeared as farms became secondary to the development of a seaside resort. After the Ferguson purchase of 1889, the new primary owners reestablished sheep in the 1890s on a lesser scale as part of their major expansion of the island’s farms. The numbers were relatively low, but the wooly flocks grew substantially in 1906 because, as the Day reported, “the land makes excellent pasture grounds and yields an excellent crop of grass for the feeding of the animals.” Each spring the Ferguson flock was moved from its home farm at Middle Farms to feed on the fields around North Hill. Unfortunately, local dogs grew accustomed to chasing them as they grazed in the area near today’s Walsh Park. In the spring of 1913, seven sheep were killed by dogs after initially playful chases turned deadly. To the dismay of Island residents, a popular border collie pet was ordered put down in the wake of these killings. Perhaps partially as a result of this episode, sheep were removed from Fishers Island the following year.

In his 1925 history, H.L. Ferguson summed up the demise of the Ferguson flock: “A band of several hundred sheep was grazed for a good many years, but it was too few in number to need a herder and was a constant bother, as the sheep were continually getting through the fences and damaging the crops. They were disposed of in 1914.” The sheep exited the island only slightly ahead of their bovine neighbors. One decade later, the remaining herds of cattle were similarly dispatched as the various island farms gave way to the east end residential development known as the Olmsted Plan. 1914 marks the end of Fishers Island sheep farming and 1924 marks the end of more than two and a half centuries of stock farming on Fishers Island.