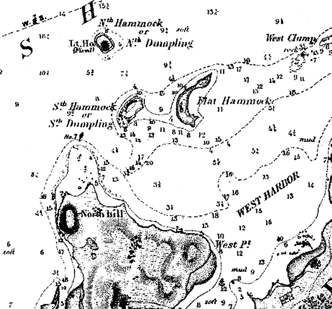 At the eastern end of Fishers Island, about two or three miles distant from the Connecticut shore is Wicopesset, a small, sandy, rocky island. Here a colony of about three hundred Wilson’s and a few Roseate Terns nest. With this colony I noticed six or seven Laughing gulls, but they have never been known to nest on this island as far as my observations extend. This island is about one half mile from the eastern point of Fishers Island, and the waters about it are usually quite boisterous, owing to strong tides; being exposed to the ocean, it is quite difficult to reach and protect.

On June 18, I found six sets of 3 eggs, 22 of 2, 17 of 1, and indications were that more birds intended nesting. Unfortunately I was unable to make a landing on my visit to this island July 4, on account of the rough weather, but we are under the impression that at least one hundred or one hundred and twenty-five young were successfully raised in spite of the depredations of the egg thieves. Two warning notices were put up on this island on the first of June. It was impossible to make any provision for protecting the birds on this island this year, as its area does not permit a camp without disturbing the birds, and the nearest house is two miles distant. If this island, though limited in area, could be fully protected, it would be one of the best breeding grounds on the Sound. Perhaps a person tenting on East Point with a boat handy could give the desired protection.

On the eastern shore is a small, rocky island near East Harbor called by the natives Little Pine Island. Here there were, on June 18, five pairs of Terns nesting (2 nests with 3 eggs, 3 with 2); all were hatched. Further to the westward one finds Flat Hammock, a low, sandy, shingly, crescent-shaped island near the South Dumpling, and about three quarters of a mile from North Dumpling Light, kept by Capt. J. T. Fowler, and a little over a mile from Fishers Island. Flat Hammock is the largest breeding ground of the terns on Fishers Island Sound. On June 24, Capt. Fowler counted 783 eggs in singles, twos and threes. On June 27, I went over and recounted, to verify the number, and found 92 nests with 3 eggs, 213 with 2, 27 with 1, 1 with 4, and one white egg, making in all 734; and we think we may have missed quite a number. We noted 14 or 15 young, and many eggs were “pipped,” in all representing a colony of 700 birds. Notices were also put up on this island early in June, and I engaged Capt. Fowler to become the guardian of the terns. With protection for one month, from June 15 to July 15, the terns did well and we estimated the number of birds hatched to be between four and five hundred, mostly Wilson’s. This is a larger number than were ever before successfully raised. We note that between the first of June and July is the time when the eggers, boating parties and summer boarders at Fishers Island, commit most of their depredations on the poor defenseless terns. On two or three windy days, it was impossible for Capt. Fowler to reach the island, and quite a number of eggs were taken by the aforesaid, navigating larger craft. On the whole, the partial protection given the terns, shows what could be accomplished if full protection were afforded the birds, as they have no enemies save man. I would also add that the number of nesting birds on these two islands increased from one or two dozen pairs to between six and seven hundred in 1897, and without any doubt they were a portion of the great colony of terns which left Great Gull Island that year.

I am of the opinion that if, another season, some one were located on South Dumpling, the birds would receive better protection, as it is only two or three minutes row from there to the Flat Hammock, and even row boats could be easily seen approaching the island. Flat Hammock and Wicopesset birds should certainly receive full protection, being the two largest colonies on Long Island Sound except those on Gardiners Island.

In June 1899, the Terns of both Wicopesset and Flat Hammock were persecuted by plume hunters from Long Island. Andrew E. Garde, an Associate Member of our [American Ornithologist’s] Union, who went to the island, ascertained the true state of affairs. He found several dead terns that had been wounded and had died on Flat Hammock, and I was afraid that they had left the locality altogether; but on July 17, I received information through Mr. Ray, that a large colony of terns was nesting on South Beach on Fishers Island, and another at Barleyfield, Cove Beach, on the same island. I was overjoyed and immediately went over and investigated and found large numbers of nesting birds on both beaches.

The shooting on this island is leased to the Fishers Island Sportsman’s Club, and the gamekeeper of the club guards the game faithfully. As there is no shooting allowed on the island save by the Club, the plume hunters did not dare follow the terns to their nesting places. The terns are intelligent enough to know there is a place of refuge in case of need.

In the breeding season of 1900 the terns went back to their old breeding grounds at Flat Hammock and Wicopesset.

In regard to Plum Island, as there is a garrison there in care of the Government coast defense works, on which work still continues, the birds have been driven away from their old nesting place. This information is derived from Capt. Clark, who lives on the island, and Capt. Jas. F. Smith of the steamer “Manhanset,” which touches daily at the island. 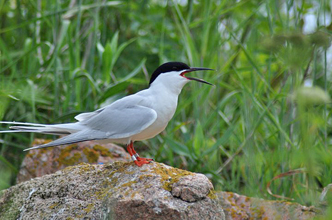 Great Gull Island, the old and famous breeding place of the terns, owing to the garrison and buildings on it, is still totally deserted by the terns; only a few essayed to use one of the extreme points for nesting purposes, but as the soldiers gave them a warm reception they sought safer and more peaceful quarters.

I regret to report that the plume hunters have also relentlessly followed the terns, and have shot them on their feeding grounds, the waters of the “Race,” the waterway between Great Gull Island and Race Rock Lighthouse, leading from Long Island Sound to the ocean; here there are large numbers of schools of bluefish, mackerel and menhaden, as well as of the smaller fry, smelts and capelin. Some of the fishermen from Long Island and Connecticut, not content with a good catch of bluefish, the schools of which are indicated by the darting and hovering terns, seek to add to their sport and to enrich their own and the plume dealers’ pockets by shooting their feathered benefactors, which they sell at ten cents each. Such destruction should be stopped, or the terns will be exterminated, as the birds are killed while caring for their young.

Robbed of their eggs and shot by plume hunters on their breeding and feeding grounds at the north, shot all along their lines of migration, slaughtered in their winter homes in southern waters, the thought of it all makes one heartsick, and the wonder is that any terns are left.

You may count on me as a champion of the terns, gulls and ospreys in this locality, and I shall use every means in my power to protect them.