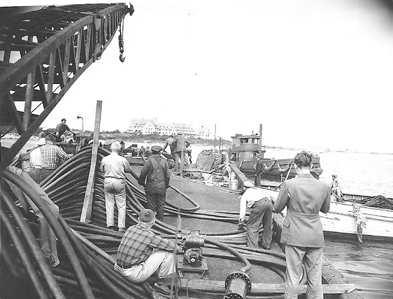 Barge with US Navy “Herald” equipment and cables off coast of Fishers Island, NY, during World War II. “The original “Big Club” clubhouse is prominent in background. – Courtesy of Jim Carpenter

In early February 2011, an e-mail was sent to the Museum by a man in Montana with a request for information about his father. He wrote: “My name is Jim Carpenter. My father was Lt. Cmd. Owen Carpenter (USNR). He served during World War II at Fishers Island. According to his ‘Notice of Separation’ (Dec. 1945), he was ‘CO’ of the installation or a portion of the installation during his last assignment of the war. My father died when I was quite young so I know nothing about his military service. I was hoping you could ‘fill in some gaps’ for me . . . both about Fishers Island and, more hopefully, about anything that can be traced to my father.”

I called Jim Carpenter back and informed him that it was likely that his father was based at the Navy Training School that occupied the Fishers Island Club’s clubhouse (on a lease basis) during World War II. I told him that almost nothing was known about the activities of the Navy Training School except that it was vaguely listed in some papers as a communication center.” Jim mentioned that his late mother had referred to her husband as having worked on sonar. That immediately piqued my interest and I subsequently e-mailed him a vintage photo of the original “Big Club” to see if that imposing structure showed up in any of his father’s pictures from World War II.

Several days later, Jim e-mailed me back an extraordinary picture of a large barge with military personnel and coiled cables on deck and the Big Club featured prominently in the background (see photo above). He also sent an image of a strange device being lowered into the water near a shoreline that appeared to be Fishers Island (see below). When I received the pictures, I forwarded them to Bob Wall at the F.I. Utility Company—who shares an interest in such matters—to see if he had a clue as to what we were looking at. Bob did some online research and discovered a site that was dedicated to the very device that was pictured: an “anti-submarine detection” device known as an “Asdic” in the Royal Navy, or as a “Herald” in the US Navy. The creator of the website, Dr. Richard Walding, a research fellow at the School of Science, Griffith University, Australia, described the function of the “Herald” device thusly: 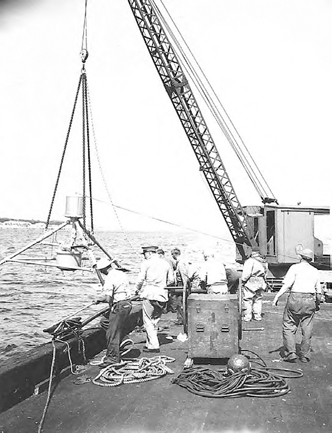 “The Harbour Defence Asdic [HDA] is a special sea-bed mounted form of the ship-borne Asdic (now known as sonar). It was developed by the Royal Navy towards the end of WW1 and first used in 1939. The US had access to this technology and called their HDA a “Herald”—harbor echo ranging and listening device. As with modern sonar, an oscillator (set in ‘transmit’ mode) sends out a short pulse of sound at about 15 kHz (a ‘ping’) which would reflect off any large object in its beam. The resulting echo could be detected by the underwater oscillator (in ‘receive’ mode). The pattern of echoes could indicate position and speed of a ship.” Quote from web page of Dr. Richard Walding, Griffith University, Australia: indicatorloops.com/hda.htm

This story could not have a happier ending. In the course of a few short weeks, Mr. Carpenter had confirmed that his father’s service during World War II on Fishers Island had related to experimental sea-floor sonar; those interested in Fishers Island’s history had determined a significant part of what the Navy was doing at the Big Club during the World War II; and Dr. Walding had received permission to post up a rare photo of a “Herald” being deployed into water on his informative webpage.