The section of Middle Farms that is just south of the road was burned on March 22nd by the Fishers Island Fire Department, led by Chief Jeff Edwards, as part of HLFM’s rotational burning program to maintain the maritime grassland. 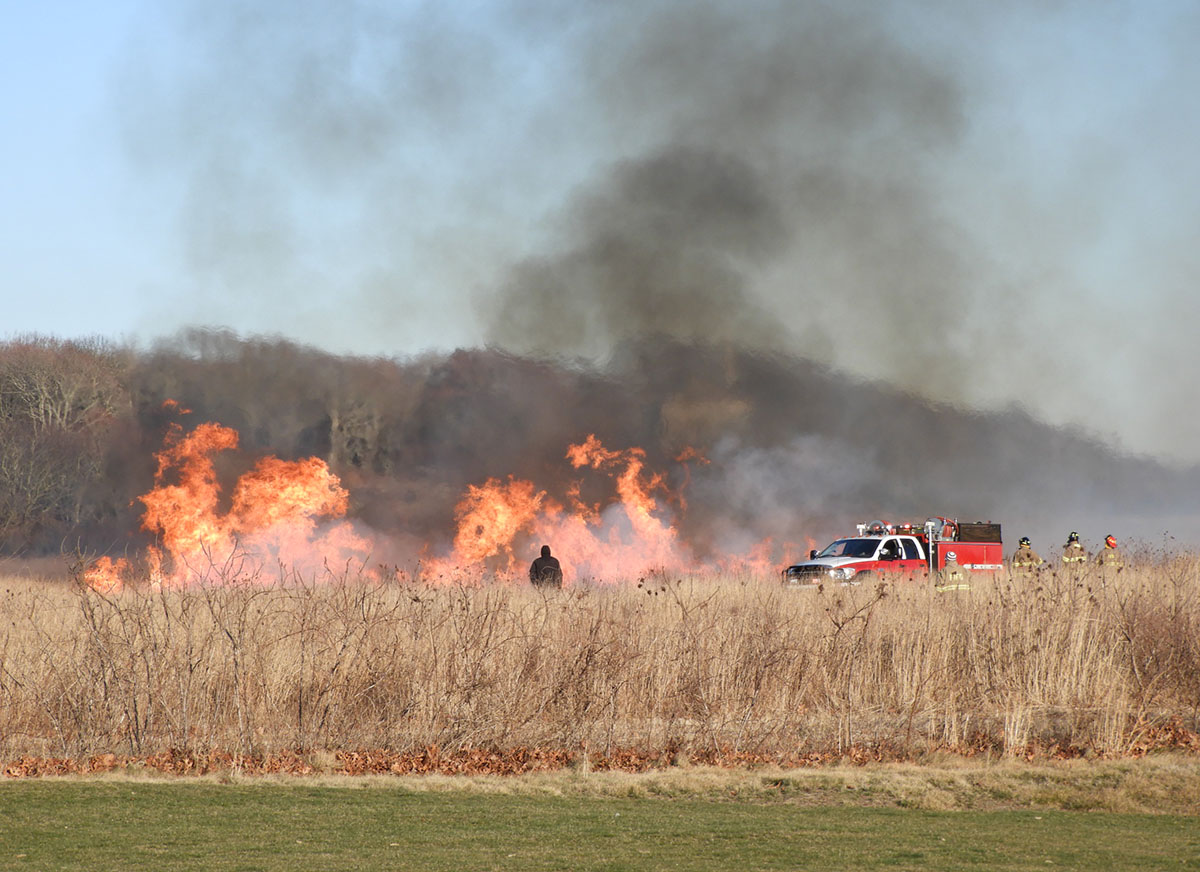 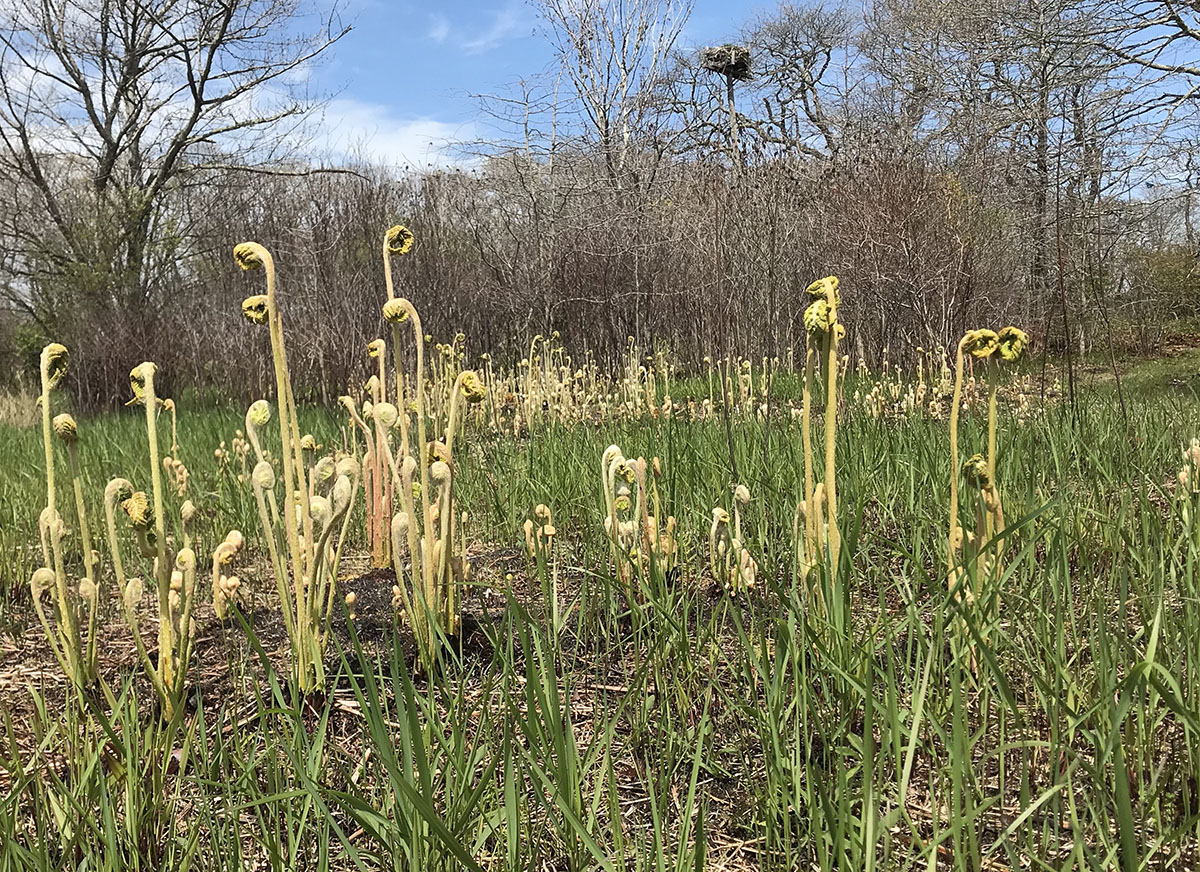 This portion of the “flats” contains shrubs and saplings that will be deterred by the burn. By May the bare and charred area was succeeded by the vibrant green of new native grass shoots.

Among the shrubs in this area is winged sumac, a favorite food of the “Hickory Horned Devil,” which is the largest caterpillar native to the United States and the larva of the Regal moth, Citheronia regalis. It is a spectacularly colorful and fearsome looking creature, but quite harmless. Although Fishers Island is outside the normal range of the species, a caterpillar was spotted late last August by Grayson Fisher, then age nine, and she and her father Murray steered others to the site. Soon small groups, including at times toddlers and nonagenarians, could be seen peering into the foliage along the nature trails hoping for a glimpse of the caterpillars, and excited shouts and laughter rang out when one was found. The caterpillars burrow into the ground in the fall, so pupae of the moths were safe during the burn and we hope for more happy caterpillar hunts in late August this year. 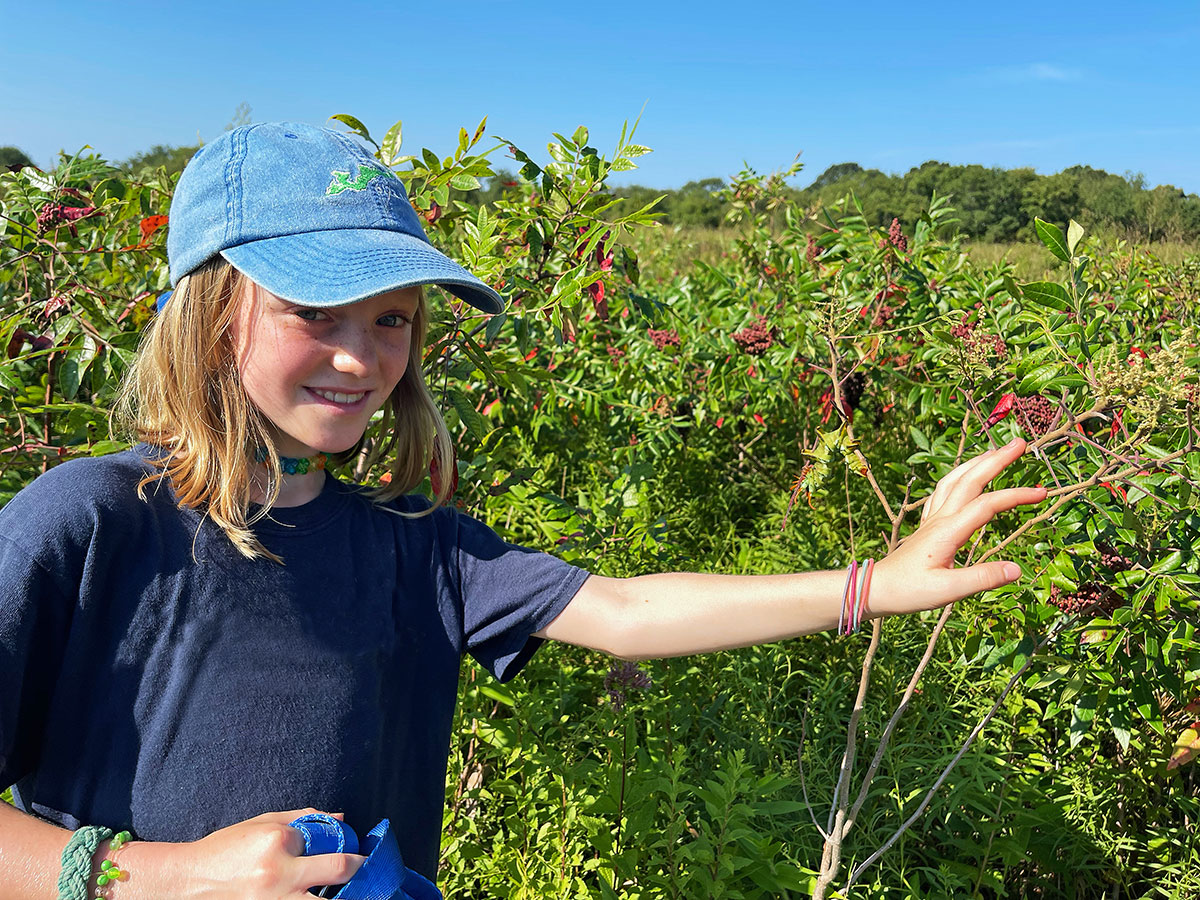 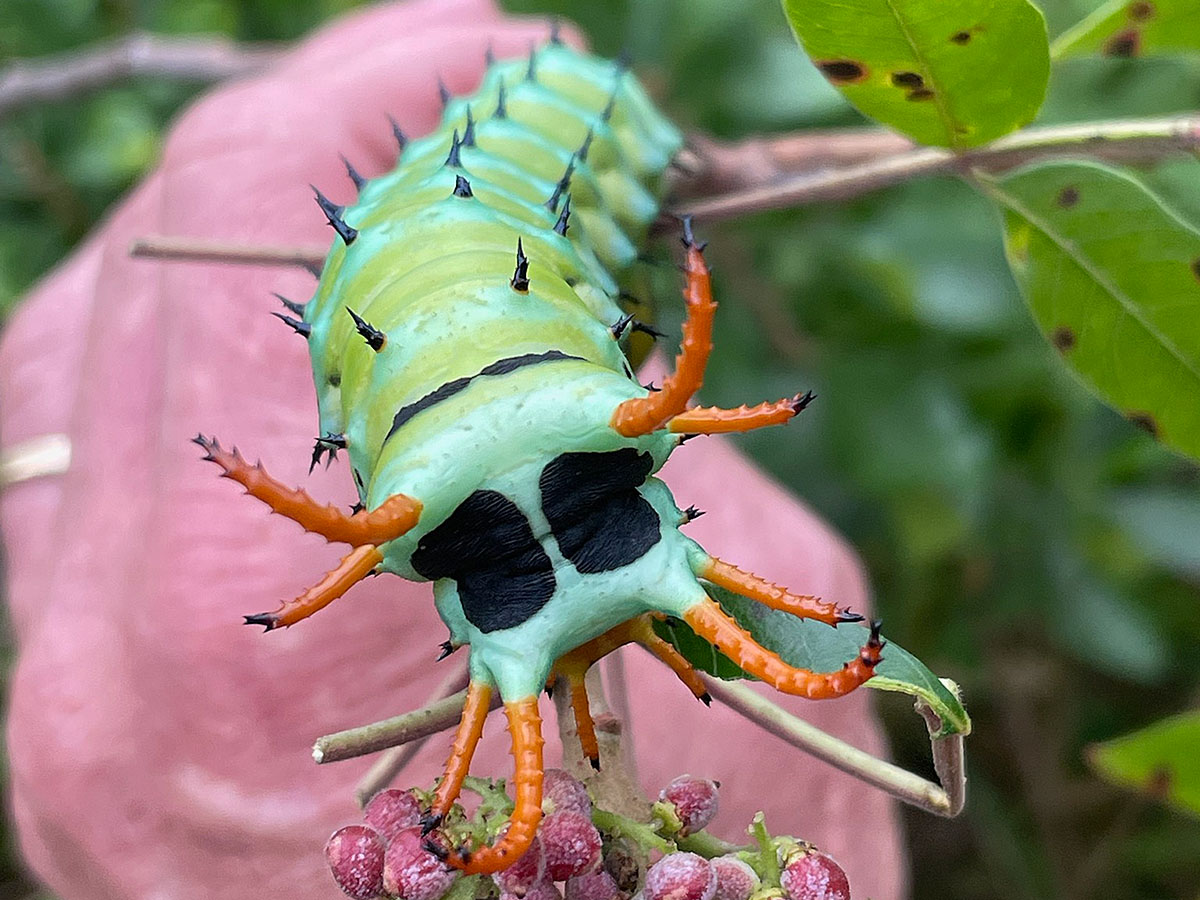 2022 is the second year of the survey of flora and fauna on Land Trust properties under the New York Natural Heritage Program.

Among the more visible signs of this year’s activities are wood “cover boards” in several locations which were cut and placed with the assistance of classes from the Fishers Island School. These boards are turned periodically to tally the snakes and amphibians sheltering beneath them. Please leave these boards in place to ensure that the Program scientists procure accurate data. The results of this and many other activities will guide us in our stewardship efforts.

The Museum is focusing specifically on improving the habitat on Land Trust properties. A major part of this effort is the control of invasive plants which are detrimental to the environment. Glossy buckthorn has been removed along the length of Chocomount Trail and we have hired specialists to address infestations of Japanese knotweed, phragmites, and porcelain-berry in several locations. Our stewardship coordinator, Jack Schneider, identified and will lead efforts to address a toxic infestation of the magnificent American beech grove in the Betty Matthiessen Sanctuary. (Please see the Nature Notes article) 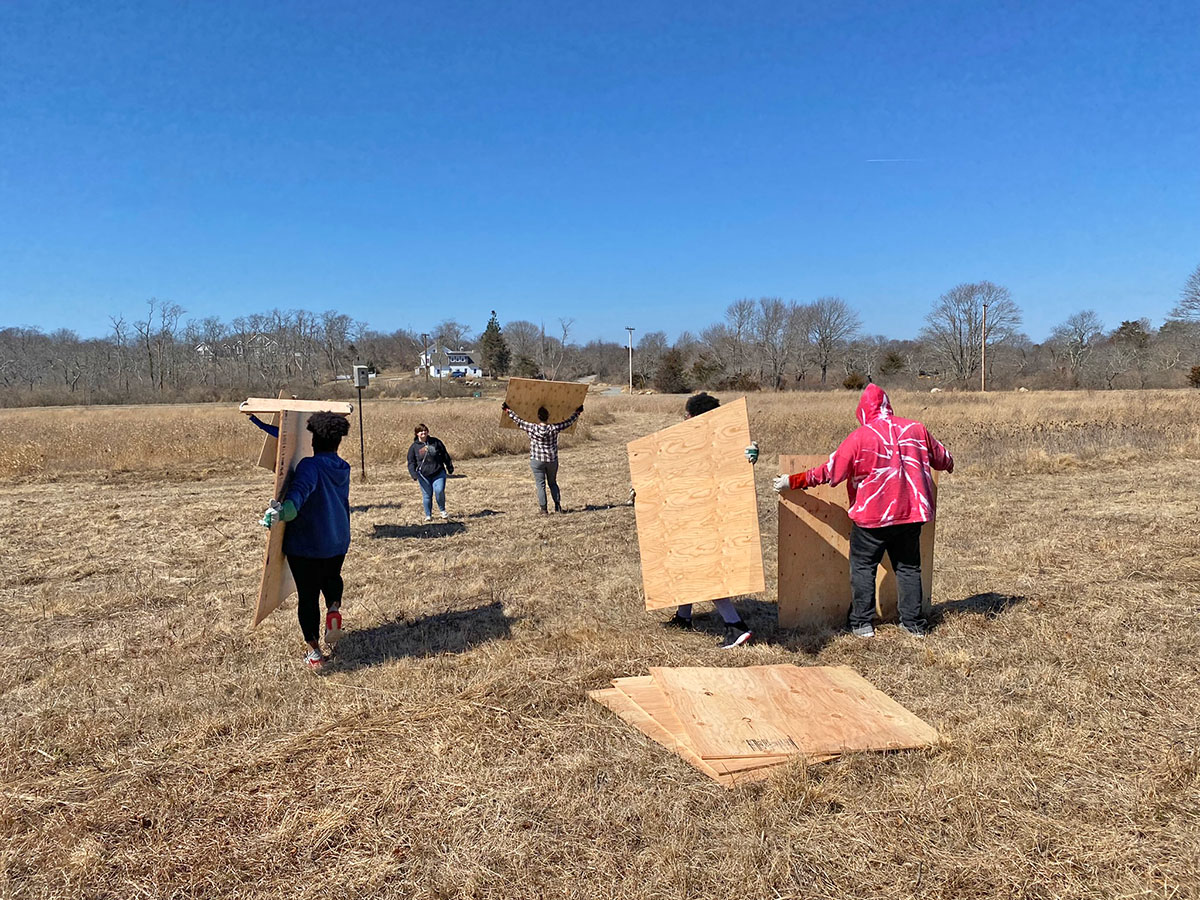 In other habitat improvement efforts, old paving has been removed along the waterfront at the Chocomount Cove Sanctuary. 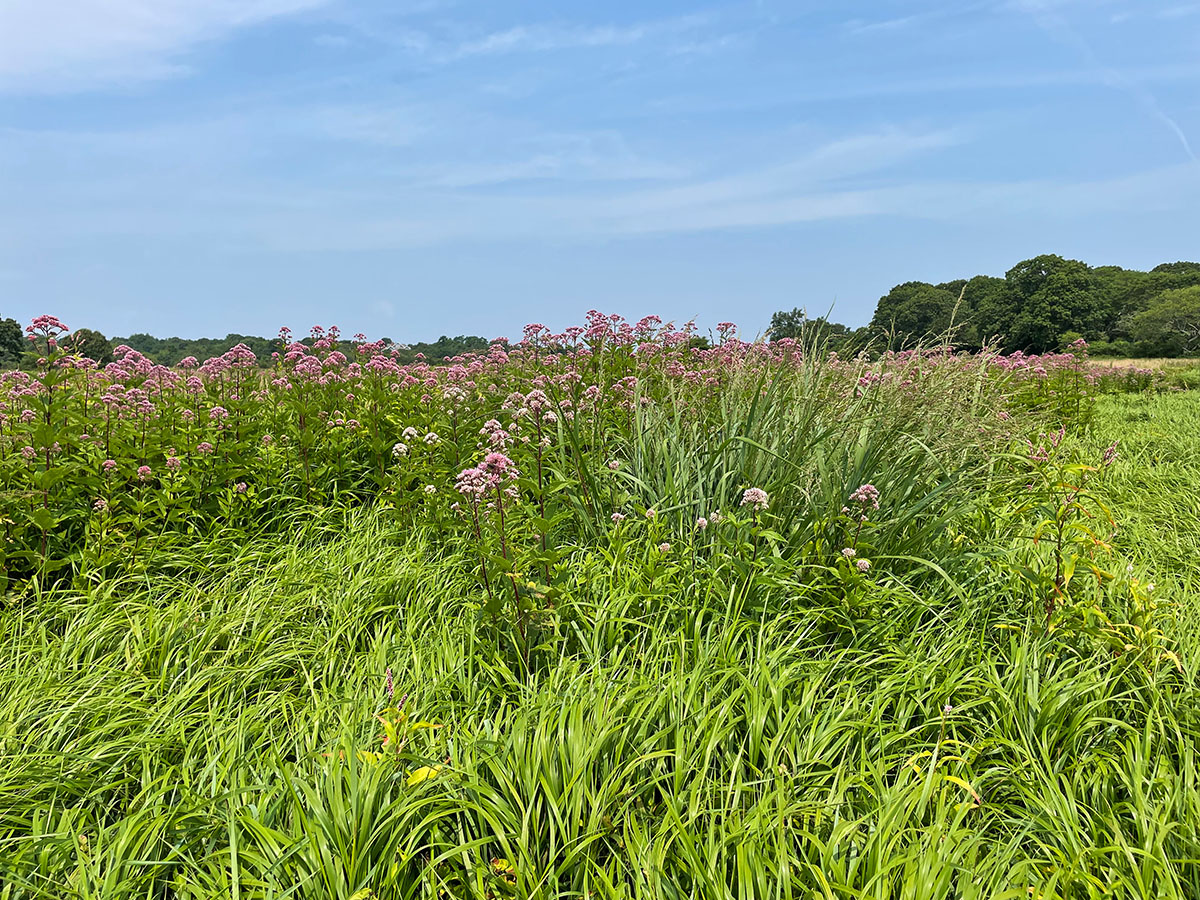 Jack and HLFM board member Terry McNamara will meet in June with staff from the Long Island Invasive Species Management Area (LIISMA) to develop plans to encourage native plants and grasses there and elsewhere, particularly little bluestem. Large stone steps have been installed to control erosion on the path to the Chocomount Cove Sanctuary Beach and beach plums have been planted. In addition, we will be cultivating native plants at a new nursery along Belle Hill Avenue – details to follow.

Finally, our network of nature trails has been expanded and improved.

Approval was very recently granted to install a nature trail on property along the north shore of Middle Farms Pond. It was acquired by the Town with “2% funds” with the assistance of the Museum in 2019. The Museum has a longterm stewardship agreement with respect to this property, and the new Middle Farms Pond Trail is now operational with a trailhead across from the Don and Kelley Young house (formerly Dwyer). We also opened a new trail early this spring on property donated by Porter Goss on Clay Point. The new “Kettle Hole Trail” has a trailhead across from Hooverness’s entrance. Look for new signs at each of these trails made by Fishers Island School students.

We hope you will enjoy our Land Trust properties in 2022! 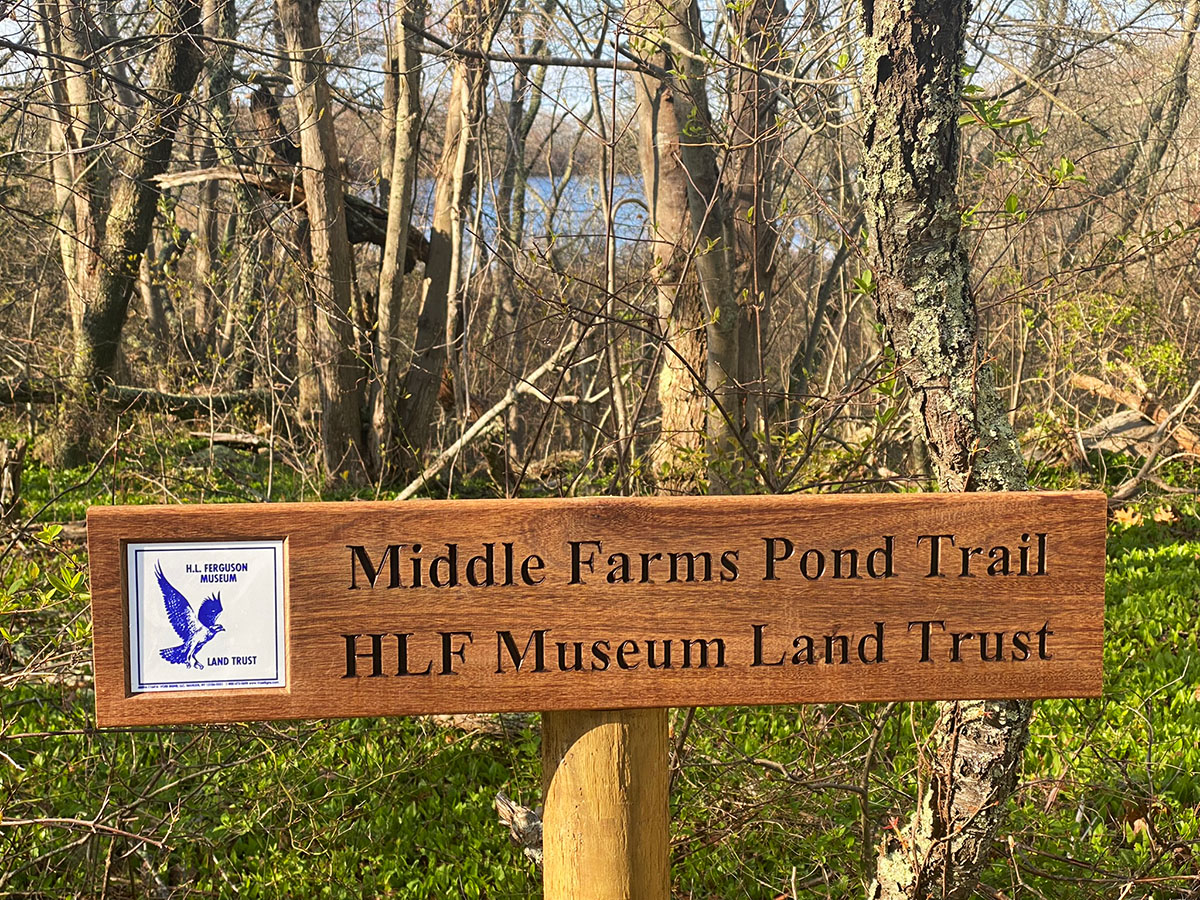