Beech tree groves are mystical places, the source of legend, poetry, and metaphor.1 The green canopy creates a deep shade, the open understory interrupted by the sturdy, gray elephantine trunks, the forgiving fallen leaves laced by serpentine roots. These groves are evocative and full of both visible and unseen life. They are worth preserving.

Beeches on the Island

American beech is a dominant species within the coastal oak-beech forest community.2 In 1639, Lion Gardiner reported large “…oaks intermixed with walnut and beech”3 on nearby Gardiners Island, which likely describes what Winthrop would have encountered on Fishers Island as well.

This is confirmed by a 1734 lease agreement between the lessor Winthrops and George and Mary Havens stipulating that the Winthrops had full rights over the woods on the island, and that the lessees were forbidden to cut or suffer to be cut or strip, peel or destroy any Vines, Pines, Spruce, Cedar, Wallnutt, Chestnutt, Birch, Beach, Maple, Sassafras, Ash or Elm or any Cherry trees…4

Despite Winthrop’s early edict, land use practices have nearly eliminated beeches on Fishers Island. Just five groves have survived – three on Land Trust property – although more may still be identified. While the groves on Land Trust property are protected, they remain vulnerable to disease and a changing climate.5

I had been watching for signs of beech leaf disease (BLD) ever since attending an online lecture in 2020. Last May, looking upwards towards the beech tree leaves silhouetted against the sky, I spotted an abnormal gallery of shadowy bands within the leaves – a tell-tale sign of the disease.

First recognized in Ohio in 2012, by 2019 both American and European beech trees in the areas around New York City, western Connecticut, and Long Island, including Suffolk County, were showing the symptoms of BLD.6

Since this disease is a relatively recent discovery,7 much about it, including mode of transmission, pathology, and cure, remains unknown. But understanding and combating the disease has become a priority for forest managers, plant disease researchers, and other scientists, since beech trees are critically important for providing food and habitat that sustains a wide range of wildlife.

The American beech, Fagus grandiflora, is a storied species that can live to 400 years. One 365-year-old tree in eastern Tennessee was inscribed by Daniel Boone, “D. Boon cilled a bar in year 1760”. Its girth (circumference) was 28½ feet when it fell in 1916.”9

Although the smooth, grey veneer of bark is perfect for memorializing oneself with incised initials, this is a selfish act that triggers a cycle of imitators. It scars the tree for life at best. At worst, it could make the tree more vulnerable to infection from diseases like beech bark disease (BBD), a devastating insect-initiated fungal infection.

Unlike the more upright, straight-trunk beech trees typical of coastal oak-beech forests found in other Fishers Island groves, most beeches growing at the Betty Matthiessen Wildlife Sanctuary on Island Pond are stunted, with contorted branches emanating from lower on the trunk. This form is more typical of trees of the rare maritime beech plant community, which is influenced by oceanic forces, such as hurricane strength winds and salt spray.10

Counting annular rings is the only reliable way to measure a tree’s age. A large branch, broken from an old beech tree at Island Pond last fall, showed 116 annular growth rings, which indicate the branch formed around 1905 and the tree a little earlier. This grove likely became established as farming practices were coming to an end in this area.

A healthy beech grove creates a canopy of shade and fallen leaves which form a brown, spongy, persistent blanket that inhibits the establishment of other competitive species. Beech saplings are often found in clumps growing out of the roots of the older trees. Otherwise, there is little understory.

The notable exception is the twig-like parasitic plant known as “beechdrop,” Epifagus virginiana.

Epifagus lives exclusively on the roots of American beech trees. Beechdrop is an annual plant that lacks leaves and chlorophyll, relying on energy derived from the roots of older trees. While beechdrops are technically parasites, they cause no harm to their host trees; indeed, the presence of Epifagus indicates a high quality, undisturbed plant community.11

Although all five of the Fishers Island groves inhabit the same soil class, only one has an abundant population of beechdrops and three groves have none. 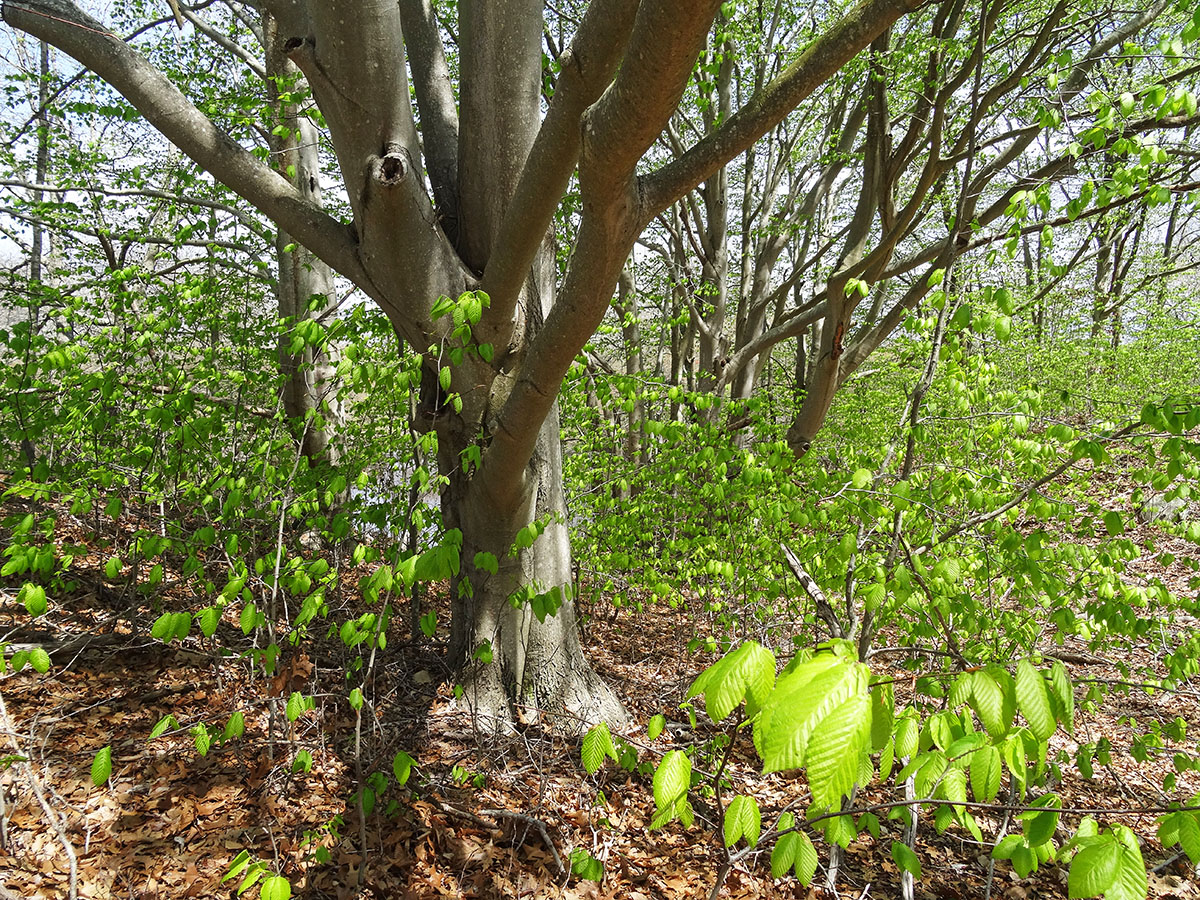 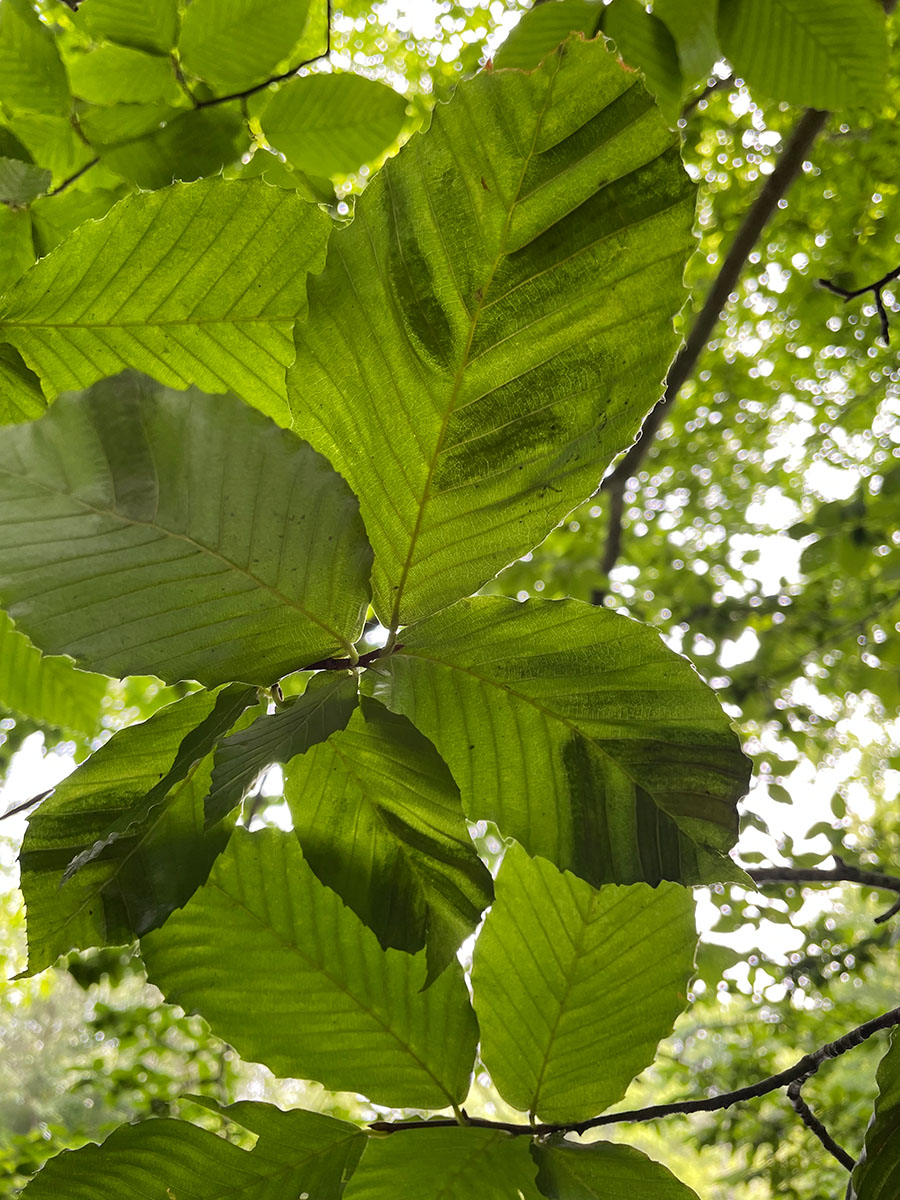 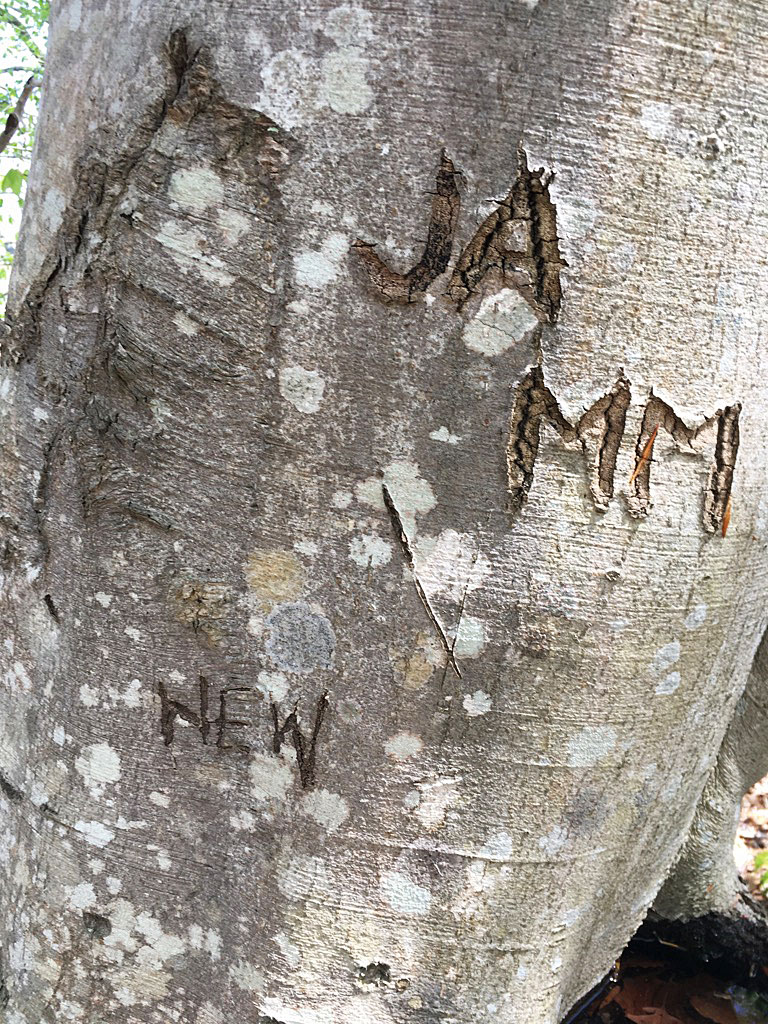 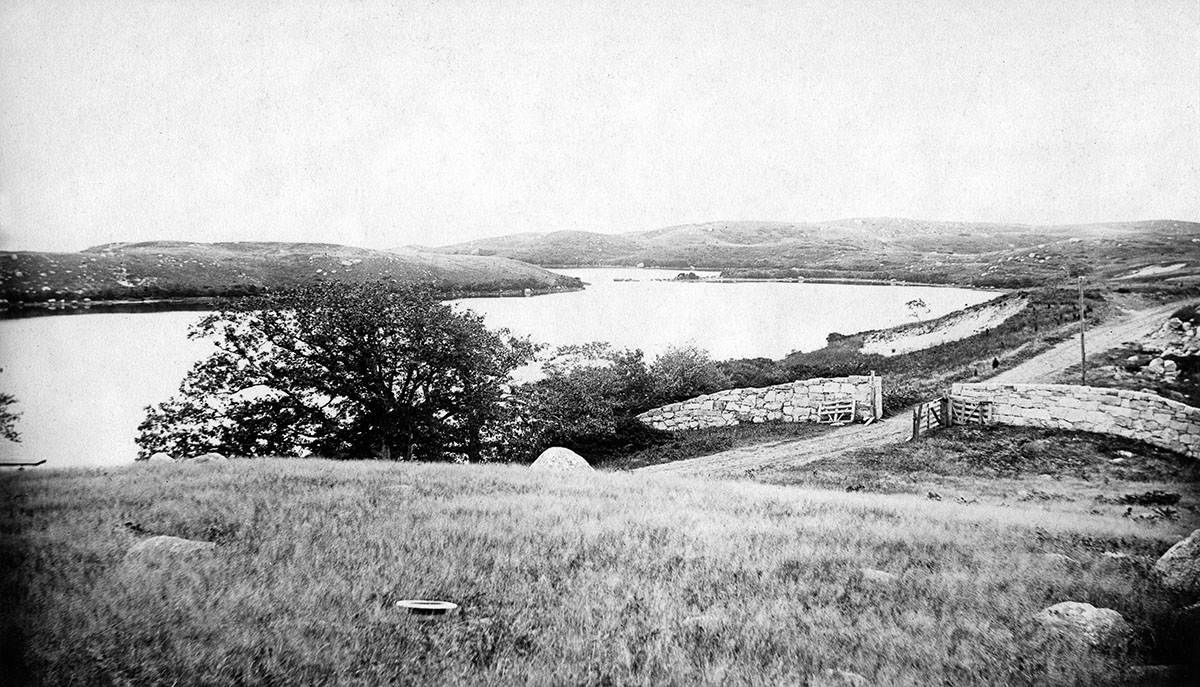 Looking over Island Pond, 1893. Note what is today the Betty Matthiessen Sanctuary in left background, then treeless.

A tiny (less than 0.1 mm long) worm-like nematode, Litylenchus crenatae mccannii, is the pathogen that causes BLD by invading the leaf.12

The nematode is likely transported by airborne agents, like birds, insects, parachuting spiders, spider mites, or even rain.

“In those areas where the disease has been present the longest, BLD has been observed to reappear and advance in subsequent years, with a reduction in buds and therefore foliage. Severe infestations have also been observed, affecting both understory and overstory beeches, characterized by increased canopy thinning, twig and branch dieback, followed by mortality within seven years, and sooner for saplings [within 3 years for saplings <5cm DBH]. In some areas, mortality rates as high as 90% have been observed among dense clusters of saplings.”13

Although researchers have been testing various approaches towards finding a cure, there is none. A promising experiment found that a phosphite fertilizer basal drench applied during the third weeks of May and June reduced or cleared nematode loads in the newly emerging leaves of young trees after five years of treatment.

The effective mechanism is unknown, but the fertilizer may be acting to increase tree vigor and mobilize its resources against the disease since these fertilizers are widely applied at golf courses to increase the hardiness of turf grass. We will be monitoring this treatment and others currently being tested and assessing their applicability to the Museum’s beech groves.

The map to the right shows the locations of four of the five American beech groves on Fishers Island. Groves One, Two, and Three are on Land Trust properties. Grove Four, which is not shown on the map, is small and located on the south side of East End Main Road near the Top of the World turn-off.

The census was accomplished thanks to volunteers from the Fishers Island School and the community. The team members first measured the grove areas with a highly accurate GPS receiver linked to a geographic information system (GIS) phone app. Then they flagged the perimeter and internal sections at each grove. Working in pairs, they sketched the approximate location of each tree within the section, assigning it a unique identification number. They noted the growth pattern – upright or prone – and whether any signs of disease were present. Finally, they recorded the tree diameter at breast height (DBH) by encircling each trunk and stem with a special forestry tape measure that graphically calculates diameter by dividing the circumference (inches) by pi.

This is a summary of their findings as of October 2021:

Groves Four and Five are not on Land Trust property and were not formally surveyed. 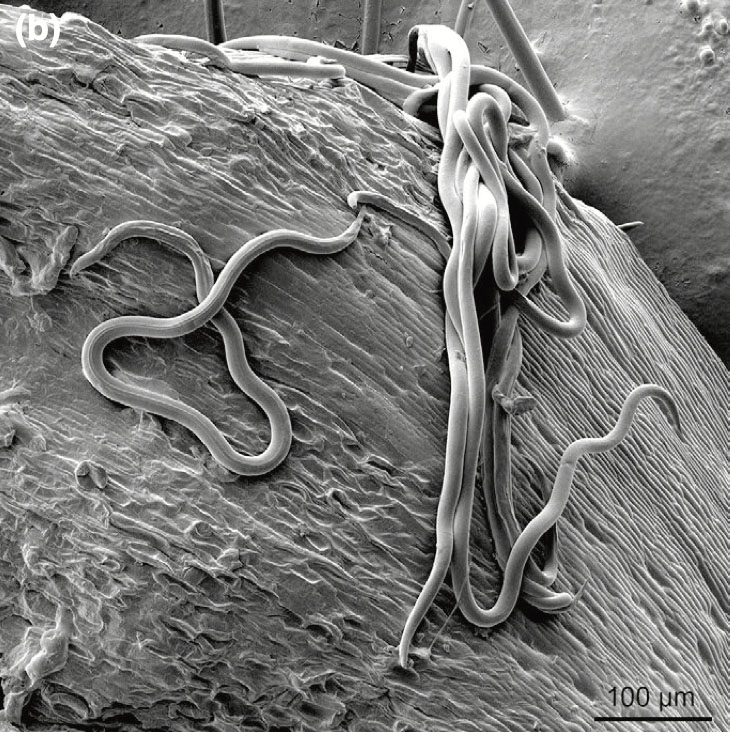 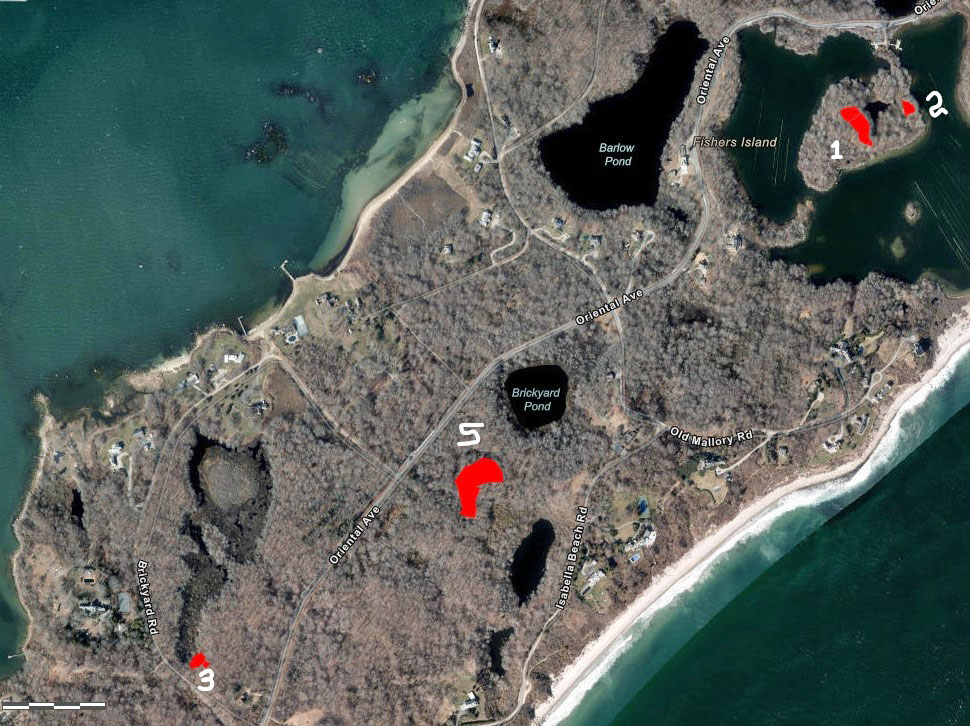 This map shows the locations of four of the five American beech groves on Fishers Island. Island Pond (aka Oyster Pond) is at upper right. 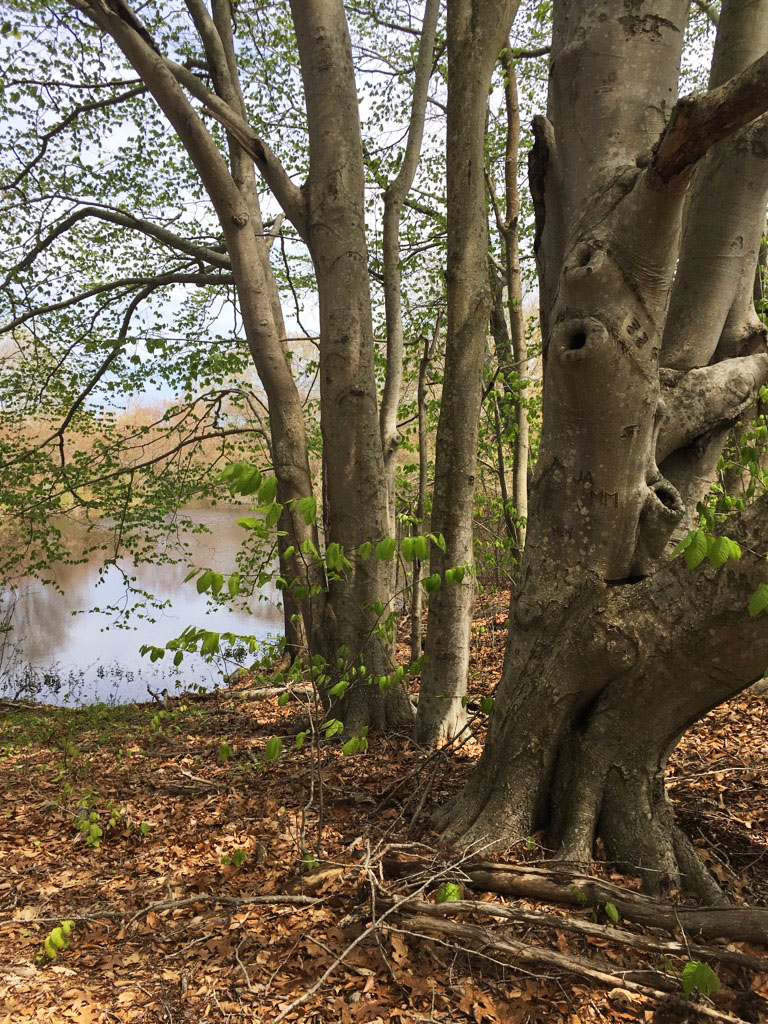 Planning the Future of American Beech Trees on Fishers Island

Once plentiful, American beech trees are rare on Fishers Island. Despite their small size, these irreplaceable groves provide food and shelter to wildlife, including transient migratory birds. The beechdrop can live only in association with beech groves. American beech are part of the Island’s natural heritage and historical legacy.

Due to the high and swift mortality of beech trees caused by this disease, time is limited for implementing a treatment plan that would be efficient and effective and minimize undesirable effects. Should an effective plan be vetted and chosen, volunteer and financial support from the Island community will be needed to preserve these majestic groves so that they may be enjoyed by Islanders for centuries to come.

The experience of being immersed in nature beneath their deeply shaded canopy and surrounded by sturdy tree trunks is like none other on the island. Without intervention, these beech tree groves and the experiences that they provide us, will be no more. These rare and beautiful groves are worthy of our protection.