Editor’s note: In April 2022, the Museum received a generous and thoughtful gift of Fishers Island-related documents and ephemera from Janice Revett Lloyd, whose parents, Letitia and Harley Revett, were teachers at the Fishers Island School from the middle 1930s until 1944. Included in the donation was a letter Letitia wrote to her parents in Rochester, NY describing her experiences on Fishers Island during the Hurricane of 1938. What makes this letter so remarkable is that it was written the very next morning after the storm.

The following details will help orient today’s reader to places mentioned in the letter: The Hansen house, where the Revetts were living at the time of the Hurricane, is the former Peter and Sue Rogan house that is adjacent to and currently owned by St. John’s Episcopal Church. The “farm’s office” was the Fishers Island Farm’s building, today’s Utility Co. building. “Mr. Ferguson” was Henry L. Ferguson, president of the Fishers Island Farms. Mr. Hansen was Hans Hansen, the Island’s postmaster. The Teacherage, where Fishers Island School teachers lived, is today Richard and Lowri Foyle’s house. The Fishers Island School was then located on Montauk Avenue overlooking West Harbor, the site of today’s Coleman residence. Pierre duPont’s “sailboat” was the 65-foot schooner Barlovento. The following is a transcript of Letitia’s letter. She also took these photos and wrote the captions.

Thursday: The Morning After

Once again, the occasion to write my “experience” has arisen. I don’t know how much the newspapers up north have stressed our little storm, but in case they’ve treated it lightly, let me tell you that Fishers Island took the brunt of a nice little hurricane.

Yesterday morning a good little breeze kept the water in the harbor quite stirred up, but ‘twas nothing out of the ordinary until about two in the afternoon. Then it began a good downpour & with the help of the wind managed to lash around pretty much. The kids, of course, began to get excited & tickled at the goings on. No one realized until dismissal time how really serious it was. By four o’clock most of the kids had been called for or taken home. Harley then remembered he’d left the window open at Hansen’s. So he, Mary Anna, & I made a dash for the car. I don’t really know how we made it. I started out on the sidewalk & ended up in the schoolyard but we did manage to get in & get home. I was soaked to the skin from that little distance so changed immediately into my slacks & sweater. John Hansen came in then & said he had to go back down to the dock for his cash box so Harley & I bummed a ride with him. I realize now how foolish we were to go out into it, but I wouldn’t have missed the sights for anything. Mr. Ferguson hailed us at the farm’s office. He wanted to get to his house & his car was marooned. So John drove him as far as he could, but as trees had fallen & were falling right & left it wasn’t very far. Mr. F. said he’d walk the rest of the way, got out of the car & was blown ten feet in the wrong direction. He finally got back in the car & we took him back to town. He’s a man who weighs two hundred so you can imagine how strong the wind was. We then started for the docks. In that short time since we left school two big trees had been uprooted in the school yard, the stained glass window of the chapel was blown in, & a two car garage with sleeping quarters above had collapsed. The dock was a sight to behold. We (very foolishly) drove out onto it & the water was then coming up under the planks. You’ve seen movies of wild seas – well these were the same thing in reality. Yachts of all kinds & descriptions were being tossed like corks. Pierre duPont’s $50,000 sailboat ran aground, crushed a smaller boat in its path & lay half on its side. We could see three of the crew in life preservers hanging on the farther side. We decided then it would be better for us to get in, so drove back to the house. We got into the garage & heard the Episcopal church bell ring. Harley, who had been holding the door open, let out a yell & John, Mr. Hansen, & I got out in time to see the entire steeple & entry way tumble down. Then I did get a little scared, for it was still going strong. Mrs. Hansen & Edith were in New London – The rest of us sat looking at each other & listening to it blow until about six o’clock. Then Mr. H. & I suggested we rustle up some supper which he & I did – tomato & lettuce sandwiches & milk which was some better than coffee & plain boiled potatoes & salt. The electricity, of course, was all off & as that’s the only means of light, heat, & cooking we were & still are in deserted circumstances.

When we’d finished eating, Harley & I went out again. The wind had died down to a moderate gale so we took time to survey the wreckage. (The velocity of the wind reached 105 miles an hour & the storm lasted from about one p.m. until probably midnight.) I can’t begin to tell you in good style just how much damage was done so I’ll list things as I think of them.

The teacherage had two windows blown in, all the big trees around it are down, the plaster in one of the bedrooms is all off. Miss Eno was sure the roof would go.

Boats of all kinds & descriptions were washed ashore & a new plane on the post completely demolished. The pilot in trying to save it had his back broken & died from the effect this a.m. [Editor’s note: A soldier, not the pilot, was injured, but survived.]

The tide came in way up over the road – boats now are left high & dry on it which really looks funny.

The National Guard camp is completely ruined – about twenty five mess halls etc. nothing now but lumber. (It’s really funny to see the johnnies strewed all over the parade ground.)

Mr. Ferguson estimates his loss at about a million & a half.

The Brown house – that’s the new glass one that was built last spring – had the top taken off & Mrs. B. & some of the servants were badly cut by flying glass.

We had no school today, of course, but we reported & got the kid’s attendance at 8:30 a.m. Such wild tales as each one tells! We’ve been out since then still sight seeing & listening to the tales of woe.

Last night about nine we could see that the sky over New London was all aflame. Mrs. Hansen finally got back this noon & although I haven’t had much chance to hear her entire story I guess she put in a wild night. The Fishers Island boat started back – got 1/3 of the way over & then turned to go back to N.L. – The passengers had to be taken off hand over hand along a life line. I just finished talking with her again & I guess New London was a perfect hell. A fire got going in one of the main streets & Edith said they dynamited all night long trying to get it under control. Mrs. H. is still quite hysterical so we can’t get a very coherent story from her. I haven’t begun to tell you the damage on the island, but we all have been taking pictures which will explain more later. We’re still eating sandwiches, have a limited water supply, & of course no electricity. This letter may go tomorrow & again it may not. Hope you haven’t worried, but since you didn’t at the time of the flood I’ve reasoned it out that you won’t now. Will write more later – Am going up to Lamb’s now to survey their damage.

I wouldn’t have minded this all so much if we hadn’t had so much rain – since Saturday afternoon we’ve had almost a constant down pour so that although it isn’t particularly cold the dampness is very penetrating.

All for now – let me know if you had any storm. 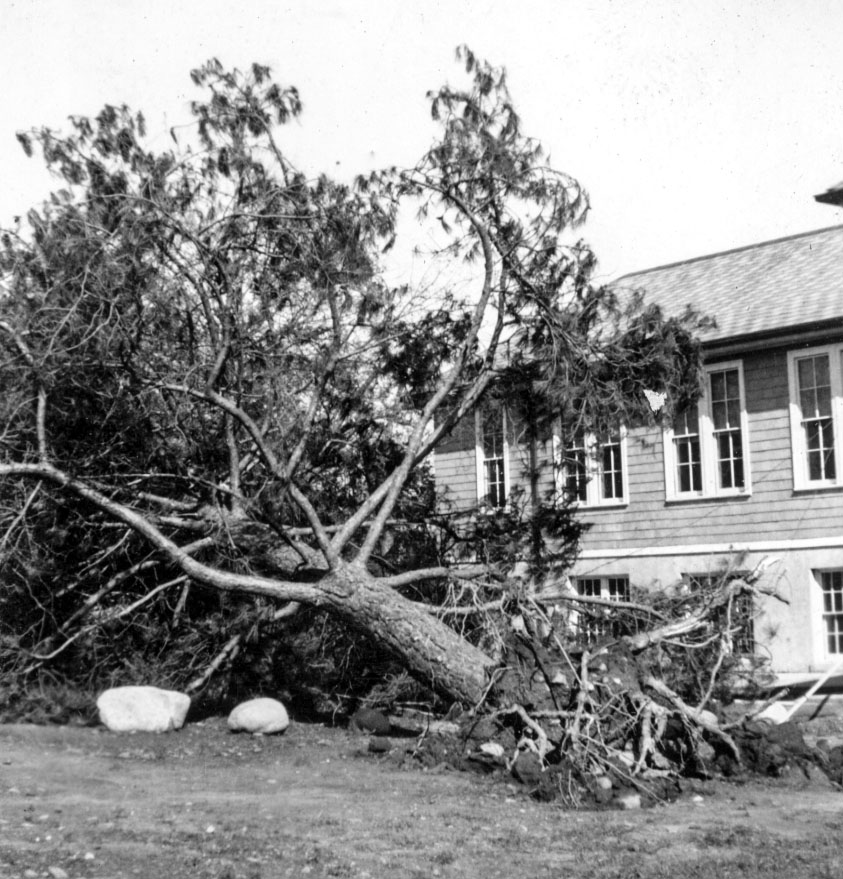 The end of the big pine in front of school. Left wing of building. 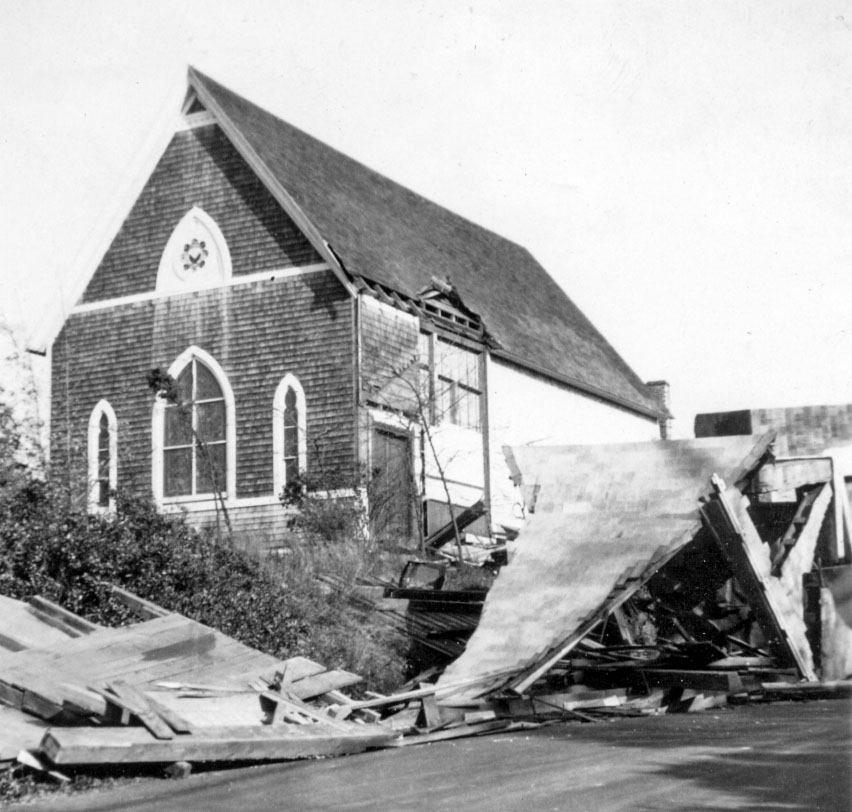 Episcopal Church directly in front of Hansen’s. Part of roof in driveway. We watched this fall. 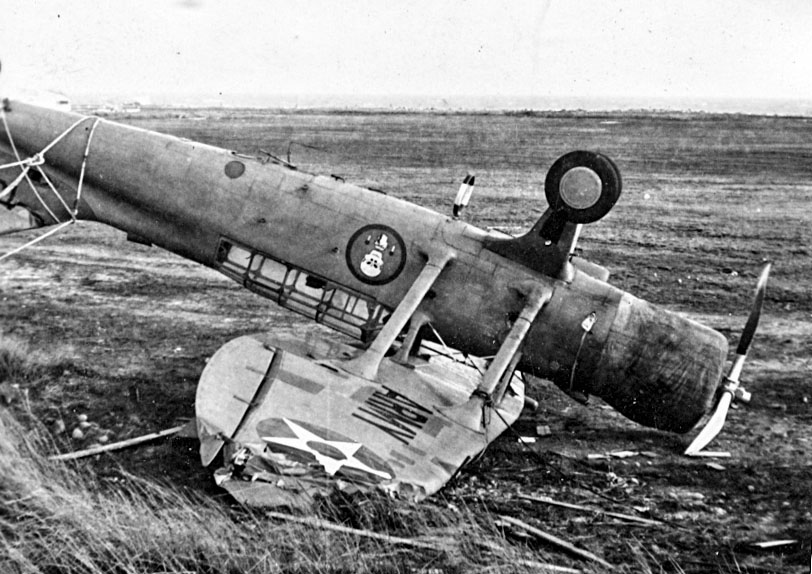 Army plane wrecked when blown over by wind . . . About fifty soldiers tried to hold it down. Tidal wave covered here later. 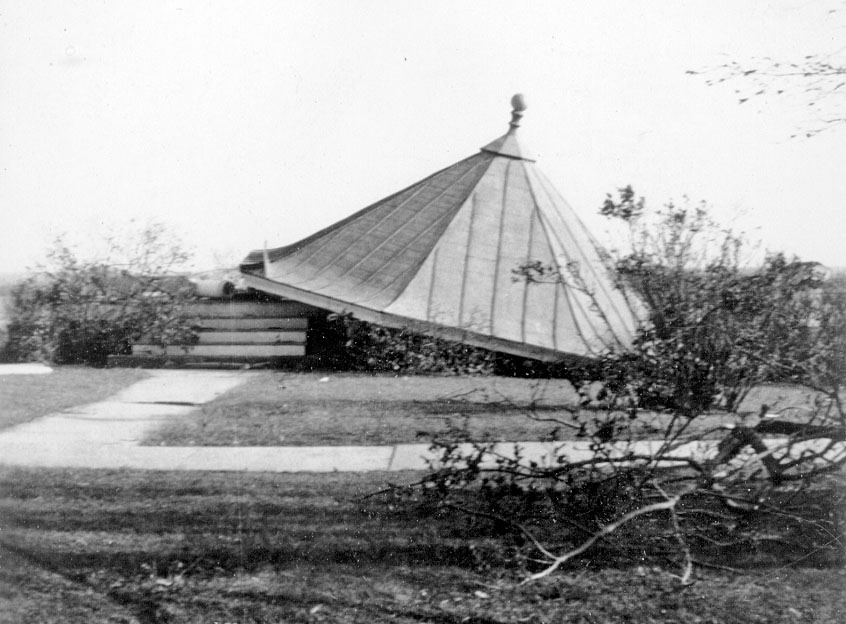 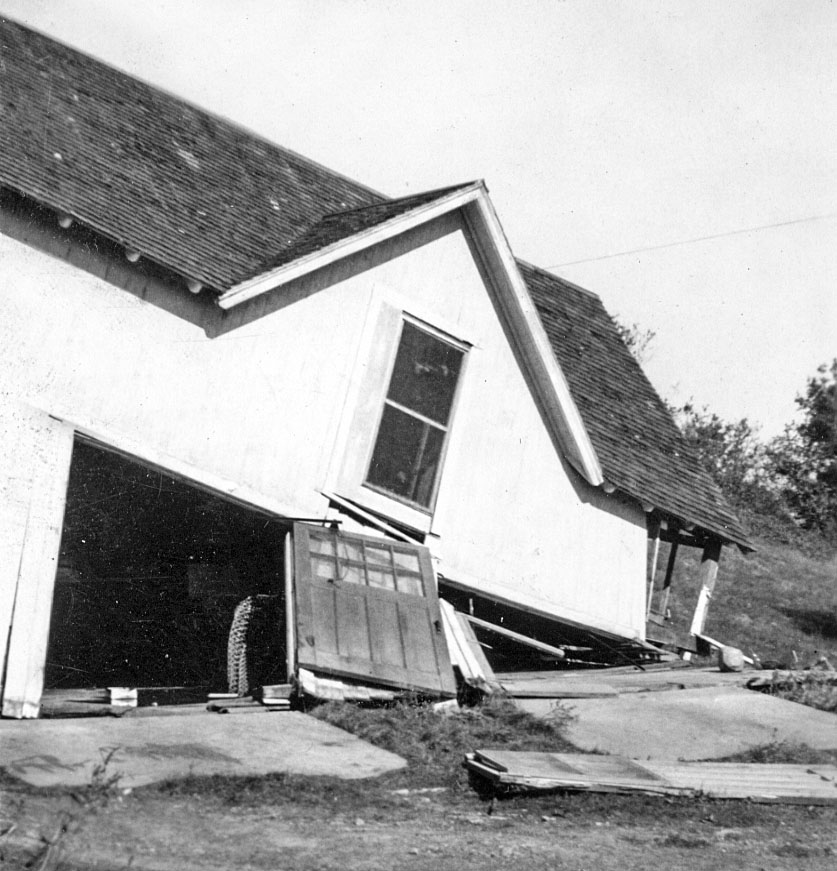 Garage which was located about 100 feet from both school & Hansen’s. Chauffeur who lived in upper story escaped & managed to save two cars. [Today’s Red Barn.]