The decade of the 1980s was a buyers’ market for househunting Ospreys. Two decades before, our widespread application of DDT on coastal marshes caused Osprey population numbers to plummet. New England Ospreys were decimated (literally) to about 10% of their pre-DDT levels because breeding Ospreys couldn’t raise enough young to replace adults as they aged out of the breeding population. Other predators high on the food chain, such as Peregrine Falcons and Bald Eagles, were also suffering.

Ospreys were the canary in the coal mine that let us know that DDT was not a win-win solution to mosquito problems. After a rather rag-tag group of Osprey fans successfully sued to get the U.S. to ban the use of DDT in the early 70s, Osprey populations began to fledge healthy numbers of young. By the early 80s, their numbers began to grow.

In the 60s, scientists and conservationists were trying to figure out why Ospreys were fledging so few young. Guy Mersereau, Peter Ames, and Roger Tory Peterson thought raccoons getting into the nests and eating eggs or nestlings could have been the problem, so they erected raccoon-proof nesting platforms on marsh islands in the famous Osprey colony at the mouth of the Connecticut River. While this didn’t solve the problem with low productivity, Ospreys readily took to the platforms.

Fast forward to the 80s, and a young Osprey arriving in March would find empty nests in trees and on poles in the salt marshes around Long Island Sound. The nests could be had for a song. A courting male Osprey in search of a mate will catch a fish and ‘sky dance’ over his selected nest site. Hovering high in the sky with a fresh-caught fish in his talons, he will give a loud piercing call, which we will, with a bit of poetic license, call a song. He then dives and swoops up again into another hover, calling out to any potential mates as he displays the result of his fishing prowess.

With an abundance of nesting opportunities and plenty of young returning each spring, Osprey numbers began to grow exponentially. Most young were able to find a mate and begin nesting on their first or second trip home from their winter range in South America. 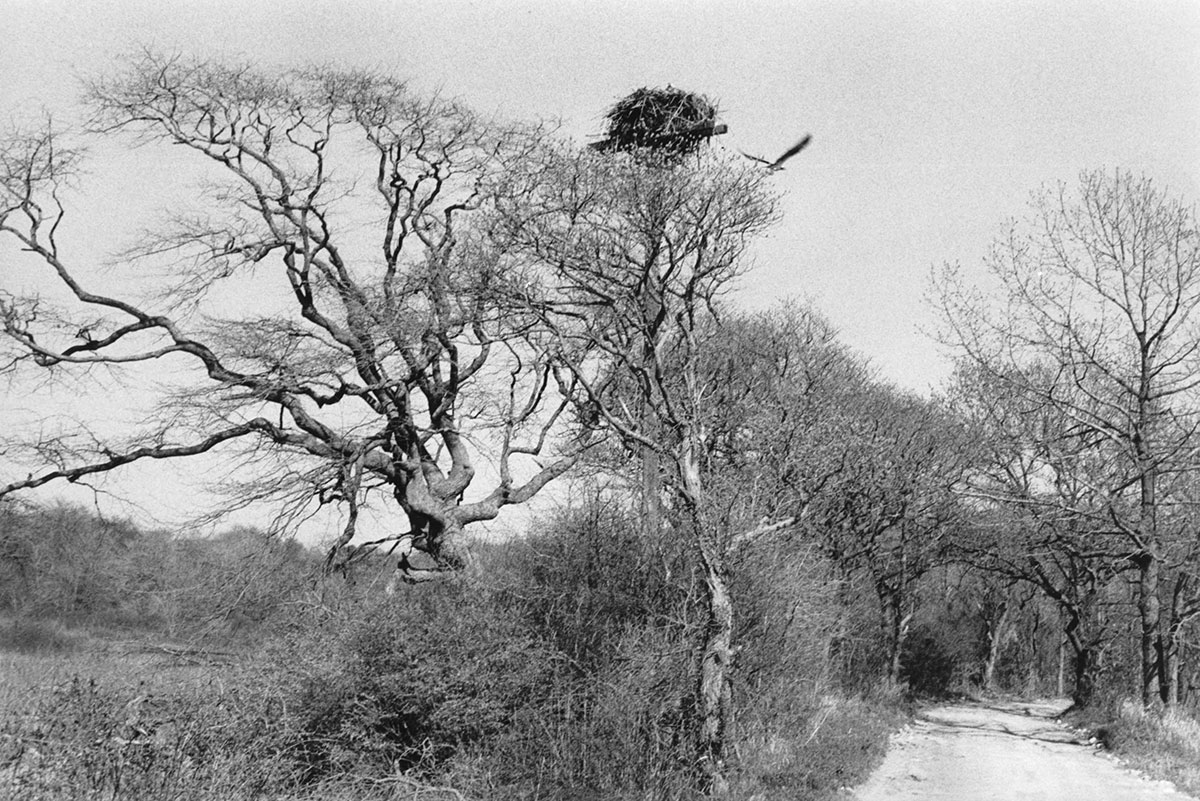 Thirty years later, the real estate market for Ospreys was very different. It was a sellers’ market, but no one was selling. The New England population was ten times what it was in the 70s—well over 1,000 pairs. Our own increased presence in coastal habitat meant more houses and fewer dead trees for Ospreys to nest in along the coast and rivers. Waterfront property is prime real estate for both Ospreys and humans. Although Ospreys do gradually accommodate neighboring pairs, there is initial territoriality, so a young Osprey looking for its first opportunity to breed would find very few vacant nests and prospecting for a suitable spot to build a new nest would often lead to conflict with an established pair unwilling, to say the least, to give up their nest site or let newcomers settle into their back yards.

Given the housing shortage, the best way to get into the breeding population is to replace an adult that did not return from migration. If a young female comes back and sees a sky-dancing male, she may begin courting the male. If the established female arrives from her winter home only to find her mate cavorting with a young floozy, the old bird will have the home-court advantage and will most likely run the young interloper out of town. If the old female does not appear, the young bird is in. Likewise, a young male arriving early may find what appears to be an unoccupied nest, stake his claim, and start sky-dancing in hopes of attracting a mate. If the resident male returns, the young bird will likely have to move on, but if the old male doesn’t make it back and the old female does, and she likes what she sees in the new bird, he’s in.

Unless he’s not. With so many Ospreys looking for a chance to breed, there is often more than one bird vying to fill a vacancy, and the fighting often results in such turmoil that the females don’t even lay eggs. Losers in these succession struggles will have to wait another year for a chance to breed. 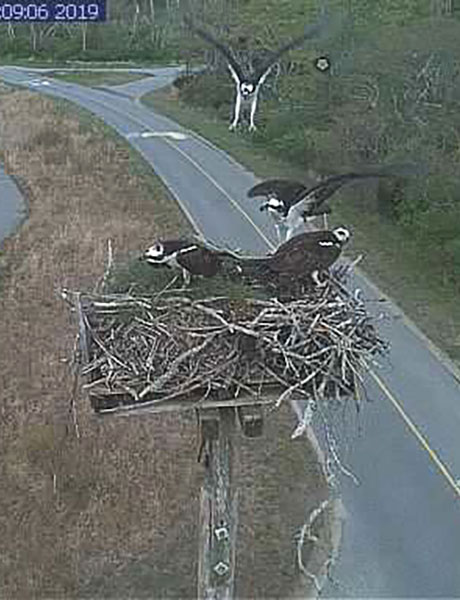 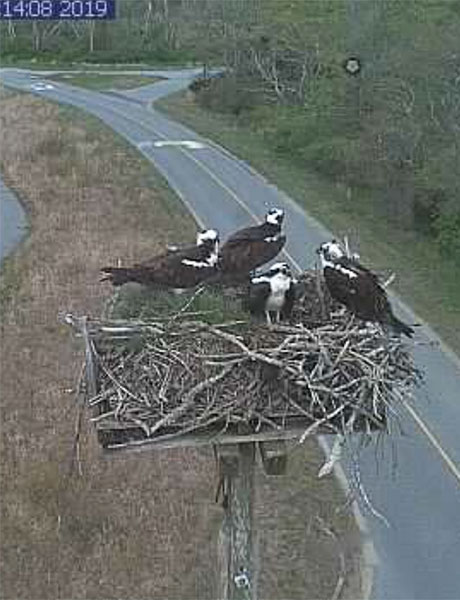 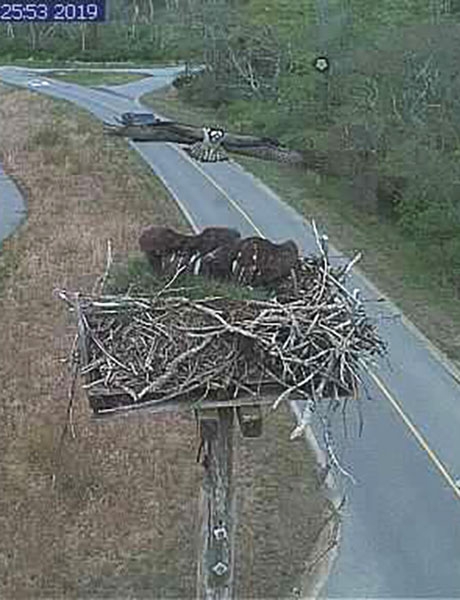 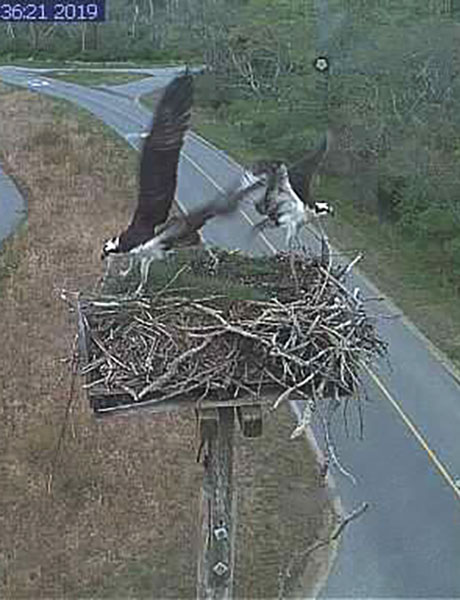 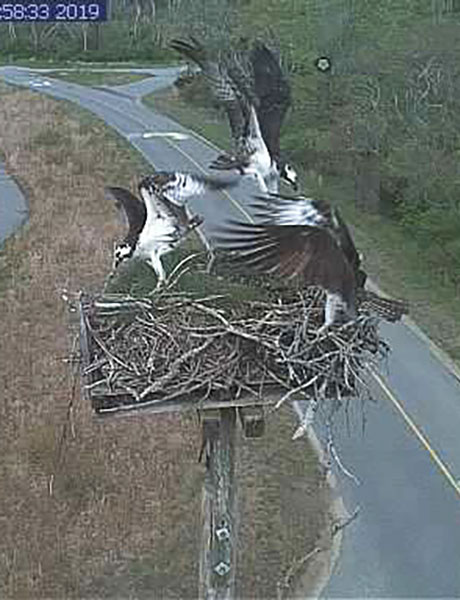 When do Ospreys first breed?

Surprisingly, Ospreys rarely nest successfully until they are at least three years old. For reasons poorly understood, when all the adult Ospreys are heading north to breed each spring, young Ospreys, who made their first fall migration the year before, stay put, spending a “gap year” on their wintering grounds. They return only in their second calendar year, arriving on the breeding grounds when they’re about two years old.

My work with satellite telemetry has given us some insight into this process. Adult Ospreys start heading north in February or early March. They need to get back to reclaim their territories and begin the breeding process. They are driven. Their trips north are more direct and they travel faster than they did in the fall. Young Ospreys are sort of like human teenagers. They’re slow to get moving, sometimes not leaving the wintering grounds until April or May, when breeding birds are already on eggs. And they dawdle. When they do arrive, it is almost always too late to breed.

During their first or second trip home, young Ospreys may find another young bird and begin building a nest. With most of the prime real estate spoken for, these young pairs, which we refer to as housekeepers, often wind up trying to nest in all the wrong places—on chimneys or live power lines.

These relationships seem rather ephemeral. Whether it is because one or both of the newly formed pair don’t return from their next migration, or because no real bond to either the other Osprey or the chosen nest site was formed when the pairing proved unfruitful, we don’t know. But it is not surprising when doing a spring nest inventory to find that a housekeeping pair did not return.

Another insight gained from my satellite tracking studies is that Ospreys in search of a nest site will prospect in late summer. I first saw this with a male on Long Island’s North Fork. We trapped him rather accidentally while trying to catch a male at an established nest. “North Fork Bob” was passing by and wound up caught in our trap and wearing one of our transmitters. As we followed his movements, we realized he did not have a nest. Late in the summer, he began spending a lot of time at a marsh fairly near where we had trapped him. The next spring, he returned to that same spot. Carefully looking at the satellite images of the marsh, I could tell that there was an Osprey platform there. So Bob had found the platform that first August and returned in the spring in hopes of establishing a territory there. As it happened the resident pair arrived and reclaimed their territory. Later that summer, we saw Bob again focus his time at a spot just down the shore. The next spring he returned there, attracted a mate and settled down. 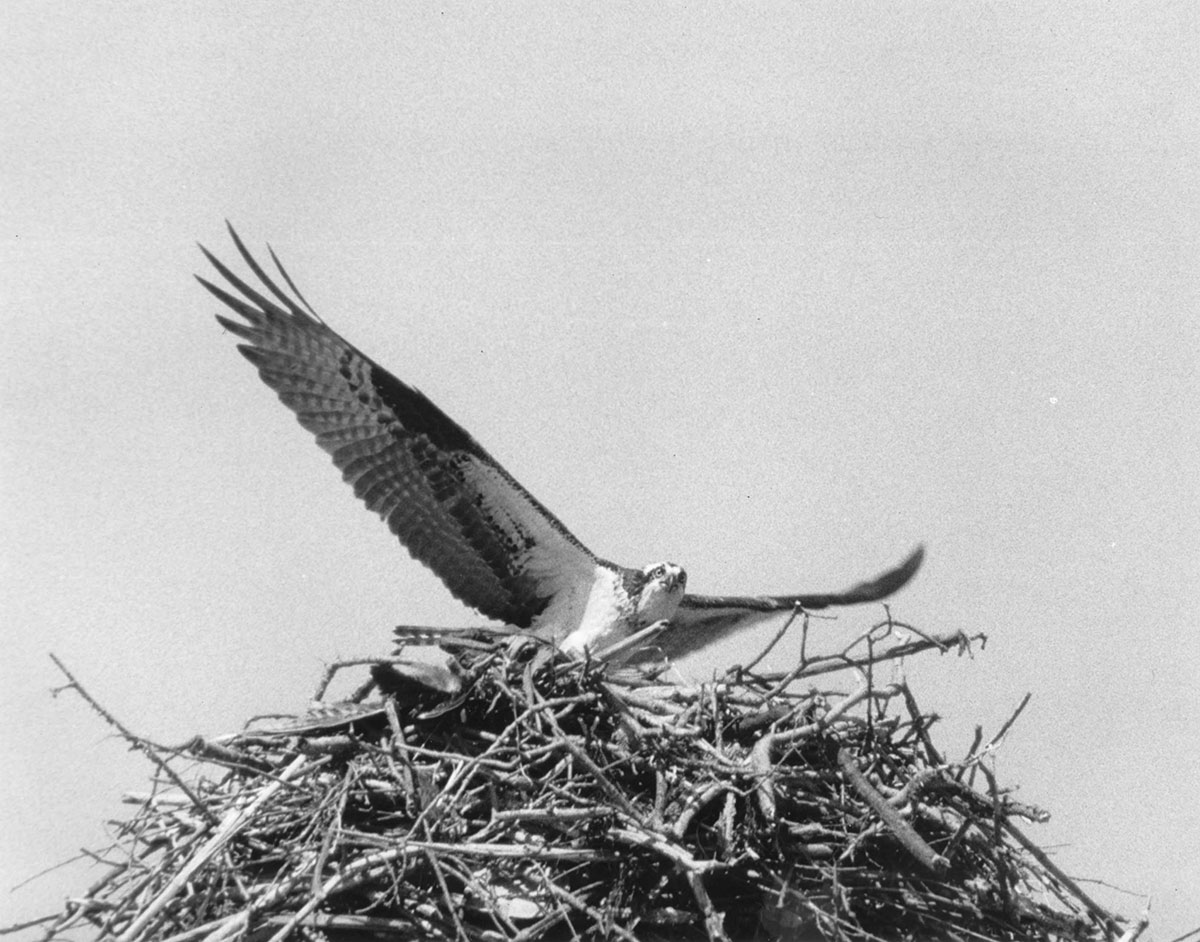 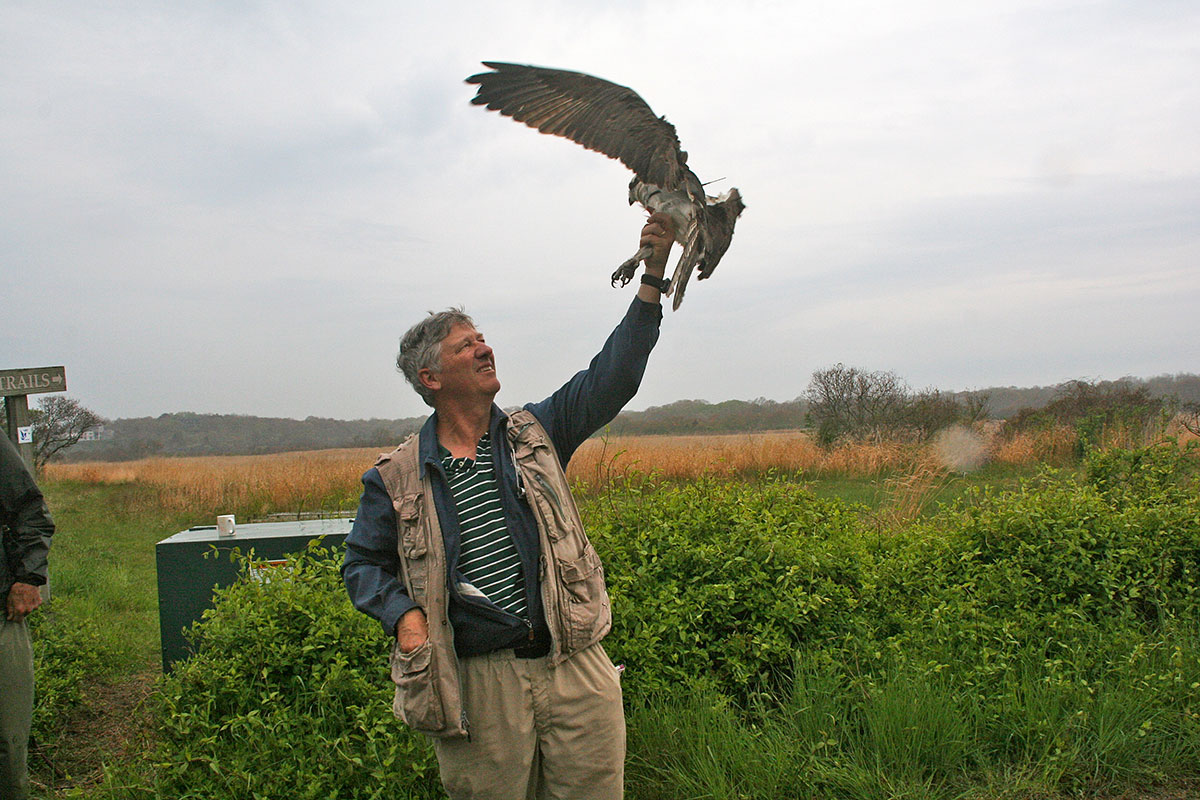 Edwin, a male we tagged on Fishers Island, went through this same process. We don’t understand what happened, but the year after we tagged him he did not return to the nest where we caught him. He wandered around between Fishers Island and nearby Connecticut with occasional forays to Long Island and Gardiners Island. We noticed Edwin seemed focused in on one spot on Gardiners and, again thanks to remarkable satellite imagery, we could see that he was perching on a nest platform. Sadly, Edwin died after colliding with a motor vehicle shortly after returning the next spring, so we didn’t get to see if he would try to settle in at that nest site, but we could detect the same pattern we saw with North Fork Bob and believe this is an important part of the house-hunting process in Ospreys.

One last point of interest is where young Ospreys begin to look for a mate and nest site. Males tend to nest within 15 miles of where they were born. Females wander much farther from their natal range. A female I banded on Martha’s Vineyard as a nestling wound up nesting in Maine, and Penelope, a female tagged as a nestling on the Vineyard spent much of her first summer exploring southern New Hampshire. And, most impressively, a female banded in Massachusetts wound up breeding in Michigan! Genetically wiring females to wander and males to stay close to home is nature’s way of reducing the chance of inbreeding.

Ornithologist and educator Dr. Robert Bierregaard has extensively studied the ecology and migration of Ospreys in eastern North America. To inform his research, he has “tagged” more than 60 Ospreys with transmitters, including two from Fishers Island. Dr. Bierregaard is giving a talk on Barred Owls on July 11th as part of our Summer Lecture Series.