Excerpted from “Rocks, Plants, Birds, and People of Fishers Island” [1999] by the late Edwin Horning.

One of the expressions I sometimes heard during my early years on the island was “getting off the rock.” This was said by people as they took the ferry to the mainland. These few words tell much about the geological nature of the island for indeed the island is a rocky place. There are rocks everywhere, on the lawns, in the gardens, protruding from the roads, in the woods, along the shore and almost always on the hills. Some are very large as the often sighted Bull Rock and rocks along the shore at Isabella Beach, along the shore northeast of Silver Eel Cove and at North Hill. One might imagine these huge boulders as barriers of the island.

From these huge ones the rocks grade downward in size to bucket-sized cobbles, to smaller and smaller pebbles and at last into sands and clays. All have been changed and are now being changed by the ever-acting forces of nature such as the sun’s heat and the waves of the sea. None of them were here 40,000 years ago. For at that time a huge mass of ice called a glacier was where we now are. In it were imbedded rocks, sand, and clay that had been scraped off the land as this glacier moved southward.

The glacier moved as far south as the Montauk area where it stalled. As the climate became warmer, it receded and every so often stopped for a while dropping out rocks, sand, and clay in piles called Moraines. One of the Moraines is the Fishers Island Moraine. We can learn more about this moraine if we, in our minds, travel down through it. We can do this because within one mile of this school building, in the early part of the 1900s, a well was drilled known as the Ferguson Well. The exact site of the well is unknown, but it was at an elevation of 20 feet. It is the deepest well ever drilled on the island. It was drilled by C.L. Grant. A geologist, Myron Fuller, studied the results of what was found and reported what follows:

This same kind of rock is in New London. It is called New London gneiss and it slopes to the southeast at about 100 feet to the mile, which would put it at about 300 feet under Fishers Island. 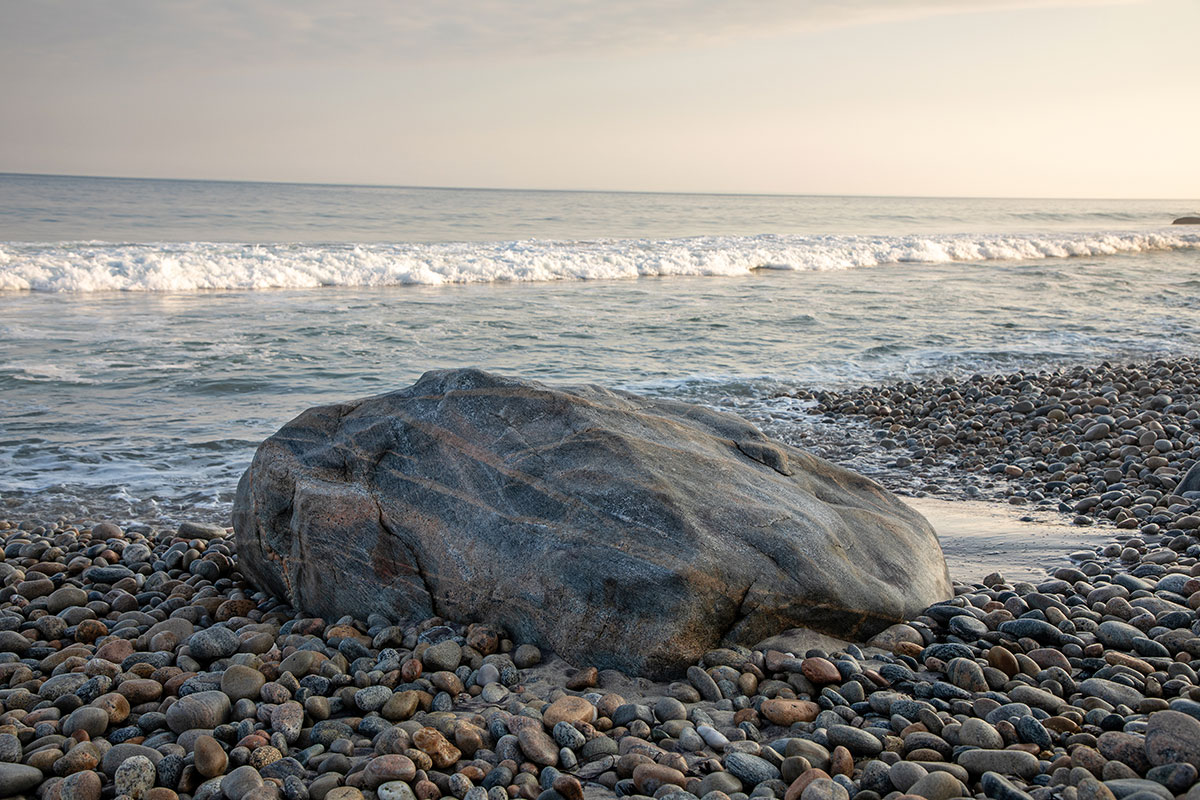 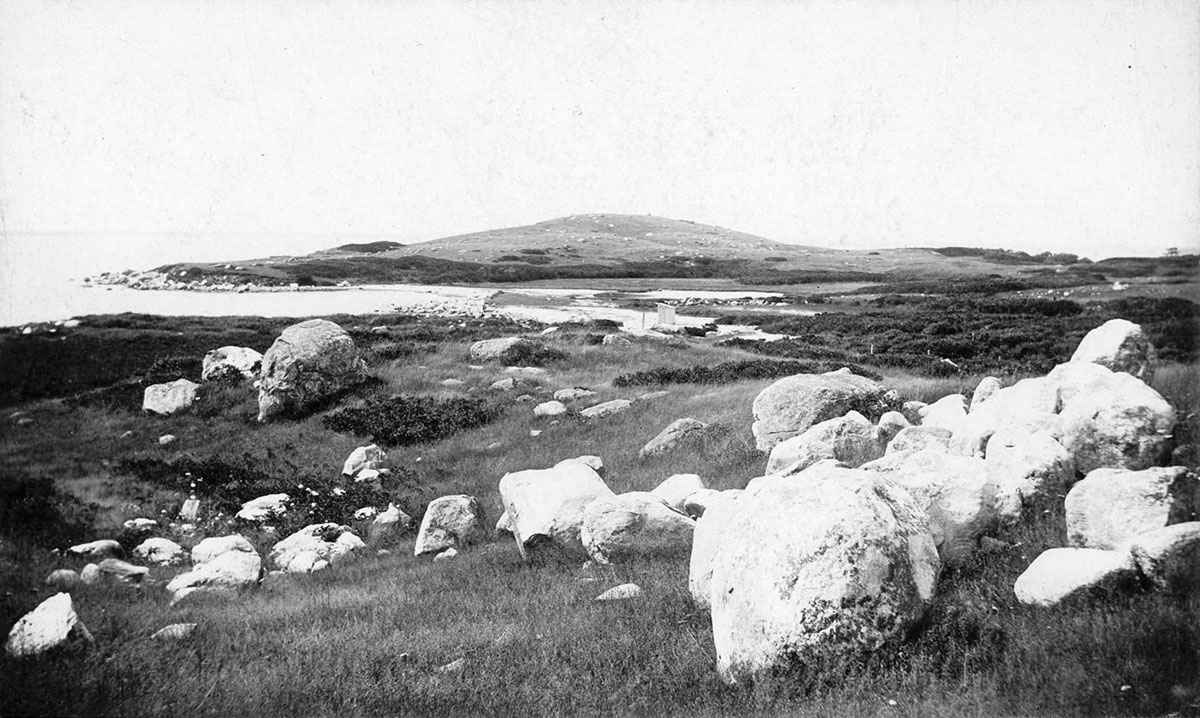 Looking north to bare North Hill with boulders in foreground, circa 1895. Photo by James S. Casey.

Les Sirkin, a geologist from Adelphi University, visited the island in the late 1980s as a part of the archeological dig project. He thought that the Navy bluffs made up of sand and clay layers were a fine example of a kame. His special thing was the study of sediments, especially pollen grains. Each type of plant has its own special pollen grain. During the growing season it is plentiful. My doctor told me that there is plenty of it in the air right now. It also can last a very long time. Thus in sediment, pollen of ancient plants can be found and identified. Sediment can also be dated using an isotope of carbon, carbon-14. Sirken can tell which plant a particular pollen grain came from and when. The kinds of plants that lived at different times can be known. We can get an idea of what kinds of plants lived through the ages on Fishers Island and the climates in which they lived.

In 1990, we began a study of the flora of the island. Gordon Tucker in his research came upon the work done by Margaret B. Davis in 1969 in the sediments at the bottom of a lake only a few miles northwest of Fishers Island. The lake is between Lyme and Old Lyme. I will quote what Gordon wrote.

During the Pleistocene, all vegetation in southern New England and Long Island was obliterated as a continental ice sheet 1-2 km thick covered the region. The terminus of the ice sheet reached Montauk Point and Block Island. All native plants were displaced southward by cooler climate and gradually reentered our area as the land was exposed and the climate warmed. Palynology determines the sequence of events from analysis of sediments containing pollen, preserved in lakes and bogs, based on the theory that abundance of pollen in sediments is reflective of local or regional abundance of species. The work of Davis (1969) carried out in Rogers Lake shows the postglacial development of vegetation in our area.

Boreal, tundra-like vegetation dominated the period from 14,300-12,150 years B.P. [Before the Present]. The pollen train was characterized by willows, grasses, sedges, and herbs.

This was followed by a zone dominated by spruce with tamarack and fir from about 11,700-9,100 B.P. indicative of a boreal forest cover similar to that now found in northern New England and eastern Canada.

This was followed by a white pine period from 7,900-8,100 B.P. during which time red maple and hemlock first appear.

Hemlock declined greatly in abundance about 4,800 B.P. in Connecticut and the Northeast.

Oak-hickory forest the present dominate of our area.

Chestnut appears only 2,000 years ago.

The most recent sediments of the last 300 years contain abundant herbaceous pollen (especially Ambrosia and Rumex) paralleling the extensive clearing of land and development of agriculture in Colonial times.

The study of pollen in sediments has enabled us to know the kinds of plants that grew in a locale such as Fishers Island long, long ago shortly after the island came into being. It also tells us that through time the kinds of plants changed as did the climate. Some of the early types are still on the island today. Sedges, grasses, willows, spruces, all that thrive in cooler climates are still here, but now through time other types have joined them and have replaced some of them. 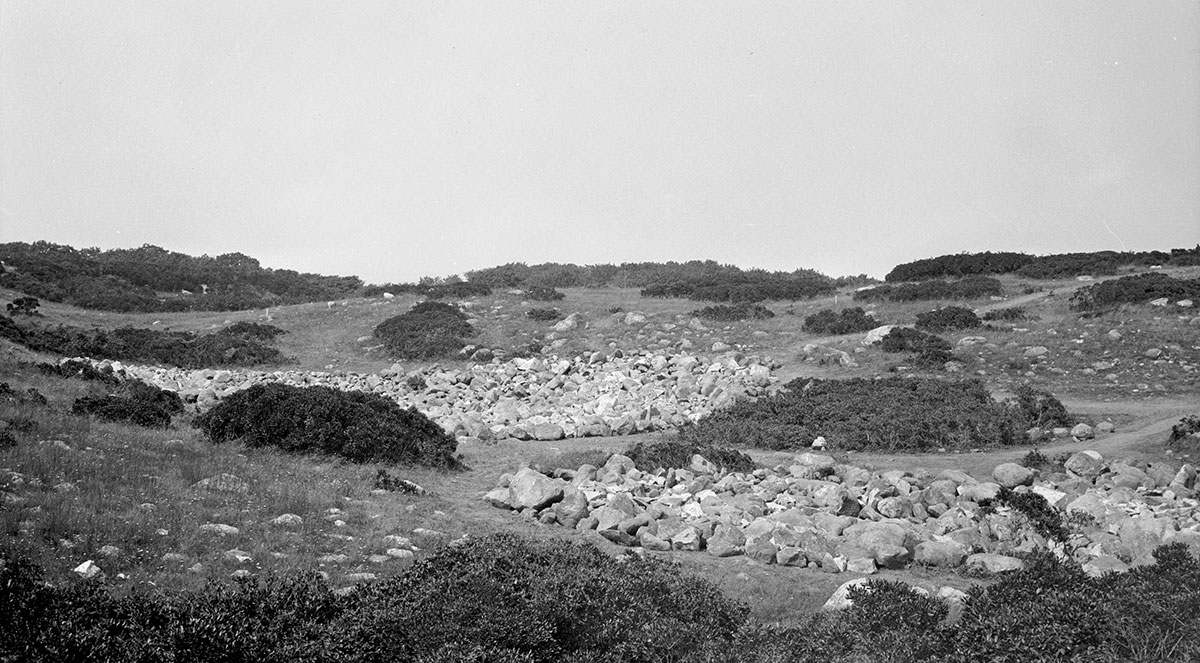 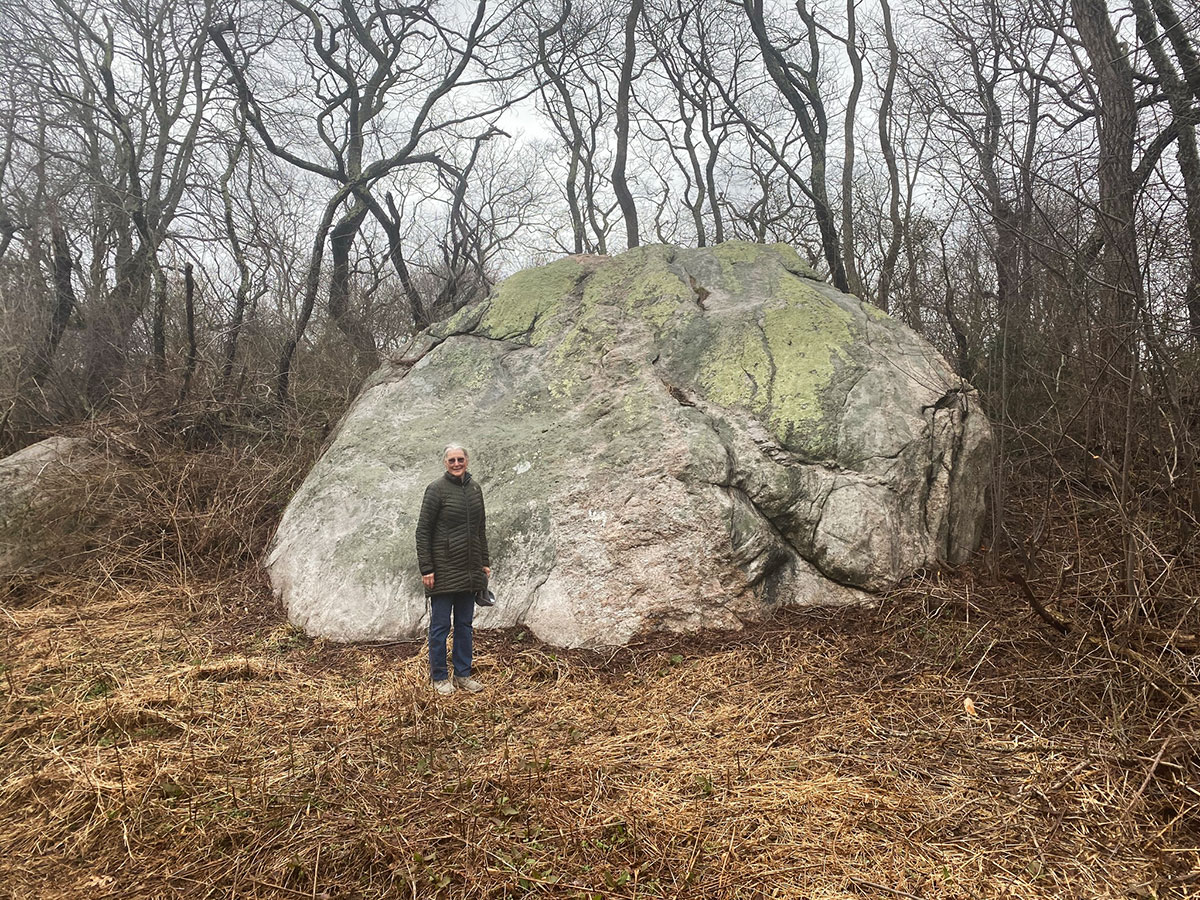 All of us have an interest in the plant life around us. Some study plants as a science and become botanists. Others follow their interests in plants, learn their names, make collections, and write about them. One such person was Bill Link, once a letter carrier in New London. While walking his route he learned about the plants along the way. On a summer day in the 1970s he came to the island. I took him to the Brick Yard Woods. There he found a kind of fern that I had not known about. It was the Massachusetts Fern. Another man living on the North Fork of Long Island developed an interest in all life. He was Roy Latham. On June 1, 1924 he came to Fishers Island, found a flower, the Golden Alexander. He collected it, pressed it, mounted it. It is the oldest plant that we have in the herbarium at the Museum.

Look around you. Visit an open field. Visit a wetland. Visit a woodland. You will find a vast array of plants. Even during this century, the landscape of the island has changed from one of grasslands to one of scrubland and woodland.