Fishers Island was one of many eastern seaboard sites that contributed to Osprey research when ornithologists were first grappling with the causes and restoration of the declining Osprey population in the late 1960s and 1970s. Two young graduate students, Paul Spitzer and Alan F. Poole, spent time on Fishers Island monitoring our Ospreys. They were hosted and assisted by Museum Curator Edwin Horning and Matty Mattheissen. Paul recently recalled that from 1969-74 he would visit twice annually—first for an active nest count, followed by an early July young count. If there were dead eggs, he collected them for DDT/PCB monitoring. He also color-banded the young in 1972-73 and then came back later in the decade looking for Osprey returning to breed. Spitzer and Poole coauthored an article entitled, “Coastal Ospreys between New York City and Boston: A Decade of Reproductive Recovery from 1969-1979,” published in American Birds, May 1980.

In the early 1960s, H. Lee Ferguson, Jr. noted that “there were no records of ospreys nesting here until about 1946. In 1961 there were six nests.” Since the late 1960s, annual spring counts of Osprey nest sites have intermittently kept track of active and inactive nests, eggs, and fledglings, though not always all three each year. These surveys were originally conducted by Ed Horning and the FI Electric Co. (with assistance in the 1970s by Spitzer and Poole), but in more recent decades by the Electric Co. in coordination with Ken Edwards and other volunteers. Remarkably, there were still only six active nests as late as 1995. That number had grown to nine by 2009, ten in 2010, eleven from 2011 through 2012, fourteen in 2015, sixteen in 2016, and seventeen from 2017 to 2019. In 2020, a record year, there were twenty-one active nests, yielding 42 Osprey fledglings. (There were also five inactive nesting sites in 2020.) While these numbers will fluctuate year-to-year due to many factors, especially prey availability in surrounding waters, to date the building of more nesting platforms continues to support and facilitate the rise in our Osprey population. 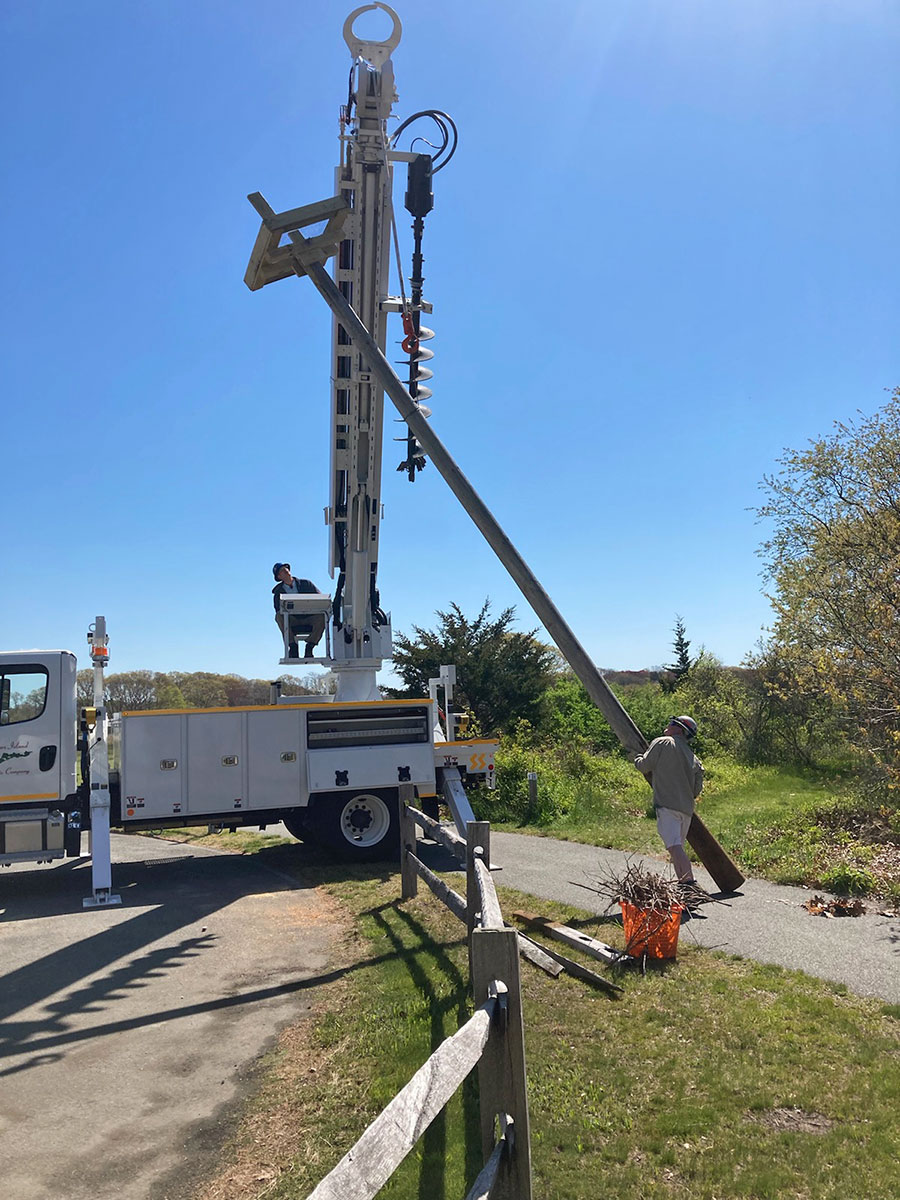 New Osprey pole going in at Middle Farms, May 11, 2021. The FI Electric Co. generously donated labor and pole for a new nesting platform at entrance to Penni’s Path. The Museum contributed the cost of the platform. In recent years the HLFM and the Electric Co. have been working in tandem to situate new poles and platforms away from power lines and active utility wires. Photo by Jeff Edwards.

In late May 2021, although several nests are still in transition, there are 23 occupied nesting platforms and nine unoccupied. Please keep in mind that these numbers may shift as the season unfolds. The count of Osprey eggs and fledglings will be conducted later in the season utilizing a drone.