Water surging over Money Pond during the hurricane.

The following account of the 1938 Hurricane’s effect on Fishers Island was found in the Museum’s files. It was unsigned. Please contact the Museum if you are able to identify the author. Please note that September 21, 2018 is the 80th anniversary of this horrific storm.

On September 21, 1938 it was reported that the Florida hurricane was coming our way. Several warnings were issued but none of these were heeded because everyone thought that it couldn’t happen here. About 2:30 o’clock the wind began to blow very hard and it started to rain. At that time no one thought much about it but when the barometer kept going down until it had reached its lowest, people saw that they were in for it and got nervous. The rain hit the windows so hard that it seemed as if they would break and it wasn’t long before they did. The excitement really started when trees became uprooted and some blew away. Garage doors broke from their hinges and buildings shook. One or two of these collapsed. The velocity of the wind during this was one hundred and five miles an hour.

The one fear in everyone’s mind was a tidal wave. This was almost realized as the water covered the docks and the parade ground. The only thing to indicate that the Fishers Island dock was still there was the boathouse which was half covered with water but still standing.

As the wind kept blowing, roofs came off of houses, walls fell in, chimneys fell down, small houses were blown away and boats were washed up on the dock or shore. 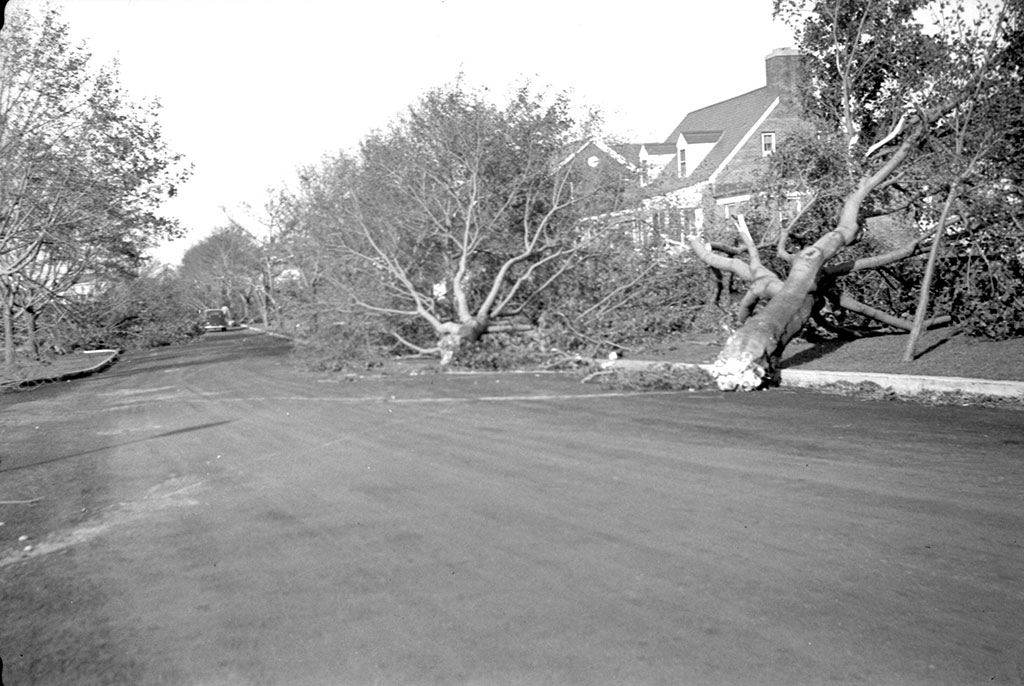 During the storm the steward of the June 16th, a yacht owned by Mr. Fulton, came up to Doyen’s store, in which my sister and I took refuge, and with tears in his eyes asked us if we had seen Captain Scewey, the captain of the yacht. He said that the June 16th was sinking due to a hole in her side and that all of his possessions were on it. This was one of the many tragedies during the storm. We saw a man almost get killed when the large sign over Plummer and Ballard’s store blew off. If he had been standing upright it would have hit him on the back of the neck breaking his neck. As it was, he had just leaned over and the sign barely missed hitting him.

From three o’clock until six was the worst time. About six the rain stopped and the wind ceased to blow so much. The sun made a desperate attempt to come out, but did not. That night people were hurrying to the store to buy candles or flashlights as the power had been shut off due to hanging wires.

The next day dawned clear and sunny but, oh, how heartracking were the sights! Down by the dock the storm did the most damage. There was a yacht on top of the yacht dock, a sailboat had sunk and all that could be seen was the mast; the Hawk, a yacht owned by A. L. Ferguson was laid slanting, half in the water and half on the dock, the June 16th was slowly sinking from a hole in the side and there was a large sailboat on the end of the dock. On the other end of the dock where the Fishers Island boat docks it was clear to note how far the tide had come up. There was a raft in front of the Service Station. The roof of the Service Station had fallen in and come right through the roof of Mr. Ballard’s car inside. The building next to it was just as bad and even worse because the side had fallen down. Farther up the road there was a small fishing boat on the rocks and a huge sailboat, belonging to Mr. Du Pont, beached. 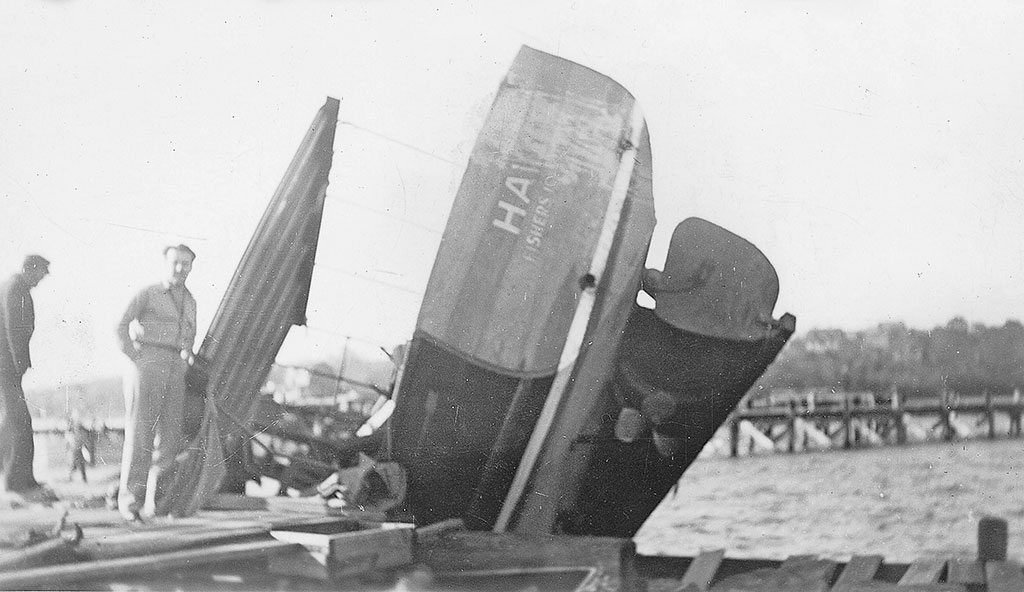 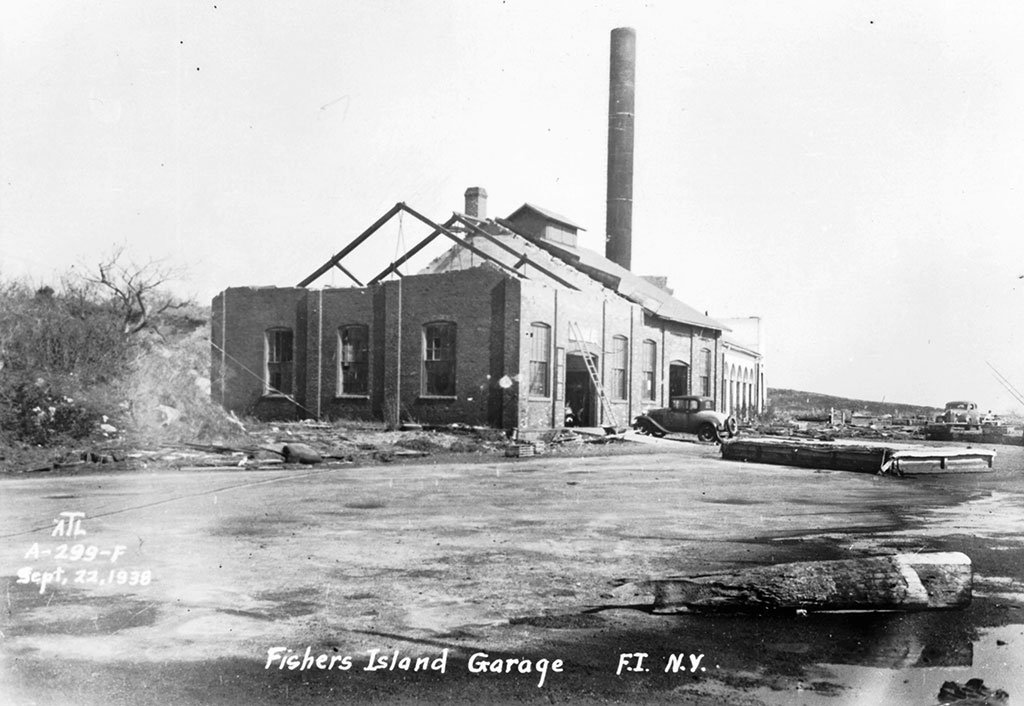 Everywhere you went you saw destruction. Every house had been damaged either by the chimneys falling down, windows blown out, trees blown down or some such thing. The Post Office lawn was now only a scene of confusion. Almost all of the trees had been blown down taking with them large clods of earth. The plate glass windows of the Liquor Store and the Fruit Market had been broken. Croll’s garage had collapsed and their house was a wreck.

On the east end of the Island much damage had been done to the rich people’s houses. The new glass house belonging to John Brown was completely ruined. The water had washed away part of the roads and in some places had left a regular beach. The other houses were damaged the same way that the ones on the west end were. There were also a few other major damages, namely—the Fish market had been broken in two pieces and the whole steeple of the Episcopal church had fallen. 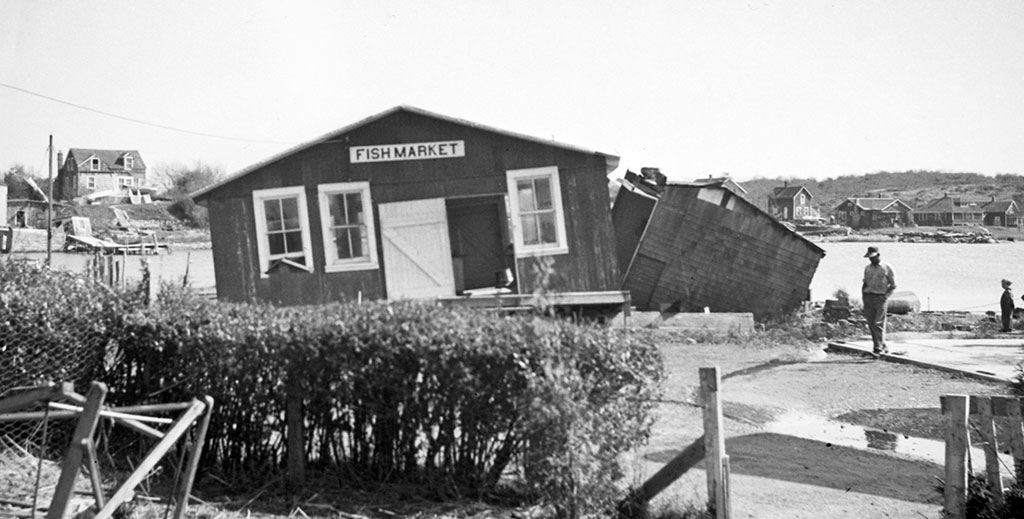 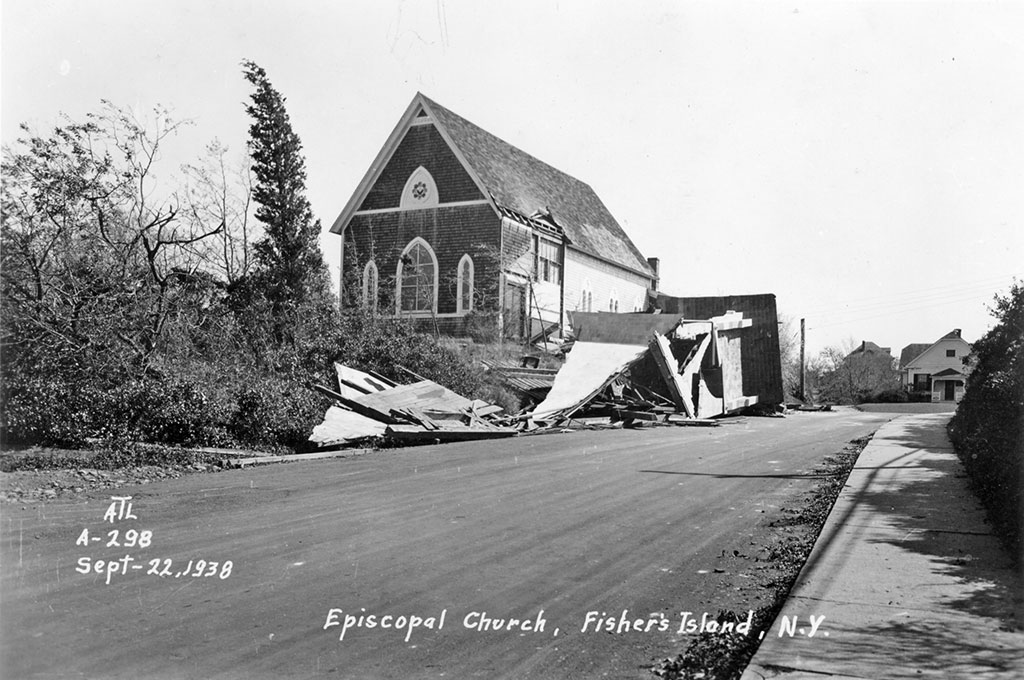 St. John’s steeple in the street.

The sight on our end of the Island looked bad, but when we saw the Fort we considered ourselves lucky. The parade ground now looked like a lake and debris was piled up on it like a shipping yard. There were even two or three ice boxes among this which had blown off someone’s porch into the water. The plane which had landed down there was now a total ruin. There was a sailboat on the parade ground and no one knew to whom it belonged. The houses had the roofs blown off, chimneys blown down and the porches of the barracks were gone. 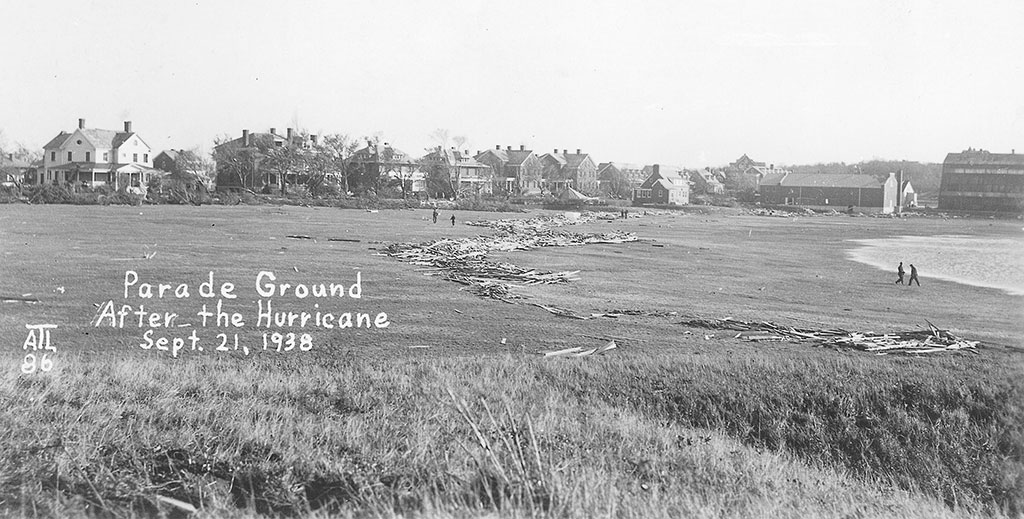 There was one other thing that was worrying people and that was, “What had happened to the Fishers Island boat?” This was soon answered when a tug came in bringing the news that it was damaged and would not be able to run for quite a while. This tug (Davis’s tug as it was called) brought food, newspapers and other necessities over to the Island. This was the only way of communication between here and the mainland.

There were twenty people injured in this storm on the Island and three dead. The dead were: a soldier who had acute appendicitis and had to be operated on by candlelight, and a captain and mate of Louie Moore’s boat which had been swept away. Their bodies were found on the Plant Estate in New London.

To see this Island now one would never believe that it was the beautiful summer resort for the rich. It makes one feel sad to see the things which have taken so long to build and grow destroyed in so short a time.