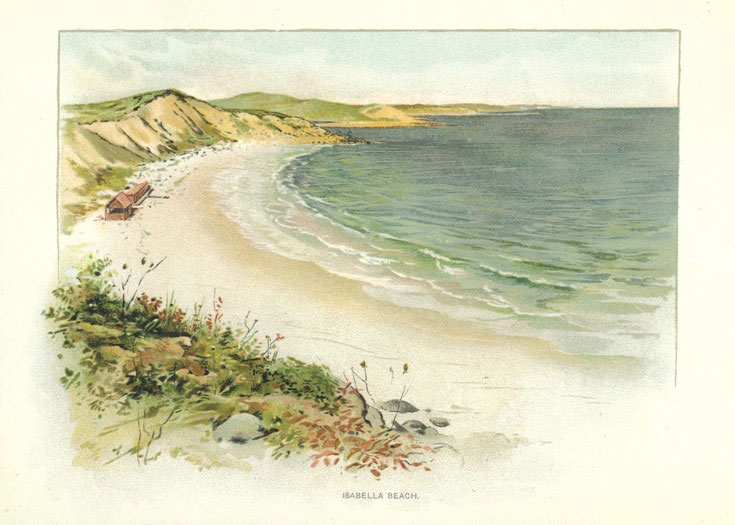 The Museum has sought for years to locate details on the shipwreck that gave Isabella Beach its name. .  .

Henry L. Ferguson’s history of the island, “Fishers Island, N.Y.: 1614-1925,” published in 1925, had only the sketchiest reference to the wreck: “The schooner Isabella Blake, after which the beach is named, went ashore in about 1870.” Recently, while doing an internet newspaper archive search of all connections that Noank, Conn. has with Fishers Island, Pierce Rafferty uncovered some surprising information. The March 11, 1867 issue of the Philadelphia Enquirer revealed that “Schr. Isabel Blake, ashore on Willoughby’s Point, Fisher’s Island, is full of water, and will prove almost a total loss; she has been stripped of sails, rigging, &c. The vessel struck on Sunday night, and almost immediately filled with water, and the officers and crew were compelled to stand in it until Monday morning. Capt. Hart’s wife stood in the cabin up to her shoulders in water for nearly sixteen hours, and when taken out she could hardly stand and was nearly frozen; those on board were rescued by a vessel on Monday forenoon, and taken to Noank, Ct., where they were cared for by Deacon E. Rogers and others, and then sent to Boston, their destination.” Further research has confirmed the wrecked schooner’s name was Isabel Blake not Isabella Blake and that she was carrying coal as cargo. The wreck occurred on the night of Sunday, March 3, 1867. “Willoughby’s Point” referred to in the newspaper article was likely Wilderness Point.

In any case, it’s interesting to note that we’ve been calling Isabella Beach by the (slightly) wrong name for 150 years.