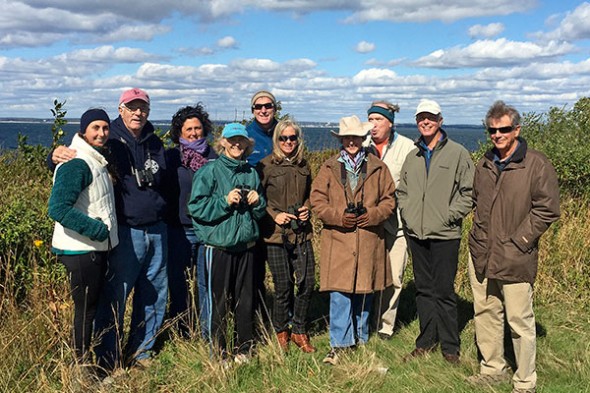 Maggie Jones, Director of the Denison Pequotsepos Nature Center, who led the Penni Sharp Nature Walk on Saturday, October 17, 2015, sent in the following bird list for the walk.

It includes birds the group saw between approximately 11:15 AM and 1:00 PM walking from the airport parking area along the southern coast side of the runway out to the hill that overlooks Race Point, returning on the inland side. Also included at end are additional birds that Maggie saw later on Saturday and on Sunday morning during her stay on Fishers Island. A great time was had by all!

Maggie’s Report from Walk on Saturday:

What a spectacular weekend for birding on Fishers! Cold northerly winds brought in a parade of raptors, songbirds and shorebirds. Here’s what flew overhead and was floating or flitting about in the shrubby edges around the airport:

There were lots of sparrows on Sunday, and Yellow-rumped warblers everywhere (hundreds?) along with many more raptors (the same species as we saw on Saturday):