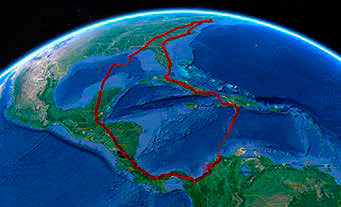 Charlie spent his winter around lakes in the northwestern Bolivar region of Colombia. On March 18 he began his migration north by heading south to Cordoba, Colombia, before turning west and then northwest up the isthmus of Panama. Instead of returning by the more direct Caribbean route, he chose a migratory path that took him to Panama, Nicaragua, Honduras, Guatemala and Mexico. After reaching the Yucatan peninsula, he returned to the U.S. via the Gulf of Mexico, crossing into northwestern Florida on March 27. He then followed waterways up the eastern coast and, after 16 days, was back on Fishers Island. Ornithologist Rob Bierregaard had been planning to switch Charlie’s transmitter to another male osprey; however, because of Charlie’s unusual flight pattern, he will continue to be tracked for another migration cycle.

Since his return north, Charlie has resumed his role as a dutiful partner of his mate at their transfer station nest. Occasionally staying overnight on the mainland, he spent most nights in April sleeping in trees near the Fishers Island nest. Throughout the month he made frequent daytime trips to the mainland to hunt for food, usually near the Niantic River on the East Lyme-Waterford border. He also made one trip south to Orient Point and a couple of trips to North Stonington, CT, and Rhode Island. 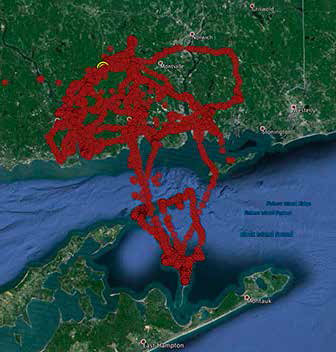 After wintering in Brazil in the Amazon rainforest, Edwin’s tracking data was intermittently picked up further north along rivers in Colombia and Venezuela in mid-February. On March 11, he started his migration north following his usual Caribbean route through the Dominican Republic, Haiti and Cuba, reaching the Florida Keys on March 24. He then followed waterways along the east coast, and after 23 days reached the Connecticut River on April 2.

Since his return north, Edwin has resumed his role as a Connecticut-based wandering bachelor. He spent most of April traveling back and forth between the Connecticut River and the Niantic River, and between reservoirs, ponds and streams in the Montville-Salem area. He rarely spent more than one or two nights in a row in the same location. He has made a few trips south to Gardiners Island and Fishers Island, and east to the Groton Reservoir—once reaching further east to Hyde Pond in Mystic, and north to Avery Pond in Preston.