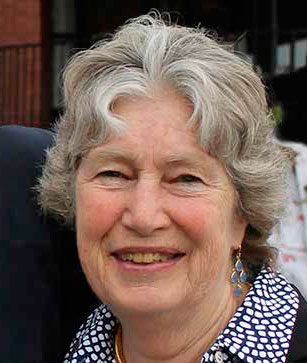 The following remembrance was read at the Memorial Service for Penelope “Penni” Sharp, held at the First Congregational Church, Guilford, Connecticut, 11:00 a.m., April 18, 2015.

My name is Pierce Rafferty. I am the director of the Henry L. Ferguson Museum, Fishers Island, NY, where Penni served on the board beginning in 1986, and as president from 2003 until her death. I am speaking as one of Penni’s many friends, and as someone who worked closely with her during the last decades of her life.

In the wake of Penni’s death last December, I felt bombarded by constant reminders of her absence and her presence, as I suspect many of you did.

Her absence—accentuated by the suddenness, the finality, the fundamental unfairness of her death. She had been so vital, in recent memory, seemingly with so much left to give to her family, to herself, to her friends, to her co-workers, to us all. Her presence—kept very much alive by the way that she had so seamlessly and generously blended into her many surrounding worlds, into our lives, through a wide variety of relationships and activities—both personal and professional—that characterized her very purposeful life.

There are countless contributions that she made that counter her absence, that help fill the gaps, that keep her present, in our presence, and it is a few of those contributions—representing many more—that I want to focus on today as we honor her memory and celebrate her life . . .

I first got to know Penni in the mid-1990s when I joined the board of the Museum. It wasn’t until the early 2000s, however, that I witnessed her going all out on a major work project. Penni, along with a small group of island naturalists, was tasked with reorganizing and reinterpreting the Museum’s
entire natural history collection for display in a new building that was replacing an outmoded structure. During this period I had the pleasure of watching Penni, a consummate professional,
repeatedly draw from her vast pool of knowledge with the purpose of sharing that knowledge with others.

With an impending opening fast approaching, she poured herself into the exhibits and text panels and did so with an ample supply of no muss, no fuss, grace under pressure that so few of us have. She was writing text panels on tidal pools and shoreline environments one minute while sorting rows of almost identical warbler specimens the next. You can’t see her there, but she is so very present in the natural history galleries of our new Museum.

Penni never dwelled on how she came to acquire her impressive range of knowledge. She was a bit of a self-effacing magician that way, always keeping the focus off herself as she pulled accurate information out of her hat. Questions were answered with ease; rarified knowledge appeared, presto, but she never felt the need to reveal, much less brag about her past accomplishments: her time at the Yale School of Forestry, where she earned her graduate degree in 1979 at the age of 41, her life-long evolution into a first-class botanist, or her decades of committed work as an environmental consultant in Connecticut. Penni stayed in the present and drew from the past without any hint of tooting her own horn. For example, she often spoke about the growing threat of invasive plants on
Fishers Island, especially the dreaded mile-a-minute vine, but she never felt the need to trumpet the fact that she had for many years been co-chair of the Connecticut Invasive Plant Working Group.

Her tendency to not talk about her day job, or about her extensive volunteer work on the mainland, could conceivably be related to the fact that she was, technically, on vacation while on Fishers Island. You would have a hard time knowing that, given all the on-island work she did over the decades. Mirroring her environmental concerns on the mainland, she remained a stalwart defender and champion of the defenseless while on Fishers. She was the go-to person who looked after rare, endangered or threatened plants in our marshes and fields, vulnerable nesting birds on our rocky beaches, and critical habitat of all types put at risk by human encroachment. One of her many responsibilities was overseeing the maintenance of the Museum’s Land Trust, consisting of more than a tenth of our approximately 3000-acre island. She worked closely with other dedicated board members to ensure that the properties remained protected and undeveloped for the benefit of flora and fauna, and yet accessible for humans through an intricate network of trails, the guide for which she wrote.

Penni seemed most in her element out of doors, walking on paths, in fields, on trails, in woods, on beaches, often with Ruby, her beloved black lab, or with family, or close friends. For many years, she also took small groups from the Museum out on nature walks that were scheduled for each Thursday afternoon at 2 pm: “Sharp,” she would remind me. The subject of these walks would vary week to week: seaweeds, rare plants, invasives, shore birds, or just “whatever we find.”

I think all who spent time with Penni have their own special memories. She just didn’t pass much time casually, or waste a lot of time. If you were with her, she was there. I don’t think I ever saw her not paying attention, when attention was needed or expected. She was a listener and an observer, always keeping her eyes on the subject at hand, be it a person in conversation, a rare plant in the woods, or a passing bird in the sky.

She brought her characteristically sharing spirit to her many interests and activities. The A to Z list is a long one, but this short sample pulled from the Bs and the Cs reveals the depth and the range: beekeeping, birding, botany, chicken raising, choral singing, conservation of all types. She was dynamic in so many ways, a gift to us all.

With the loving support of Penni’s family and those who gave to the Museum in her memory, the Board of the Museum is initiating an on-going series of educational programs entitled “Penni Sharp Nature Walks,” each walk to be hosted by an invited guest naturalist, or scientist, including ornithologists, botanists, and entomologists. These walking “talks in the field” will help keep Penni’s remarkable legacy alive in both the hearts and the minds of all participants.

We would like to thank all who gave to the Museum in memory of Penni Sharp. Your gifts will help establish an ongoing educational series at the Museum, “Penni Sharp Nature Walks” led by guest
naturalists and scientists. 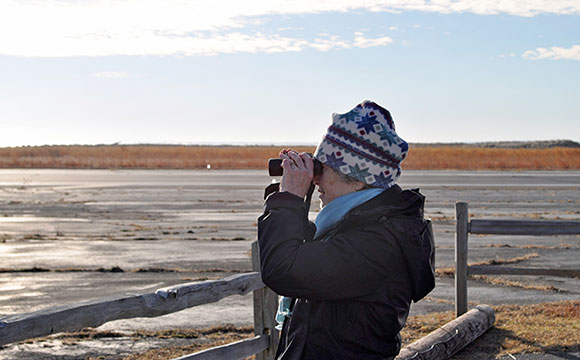