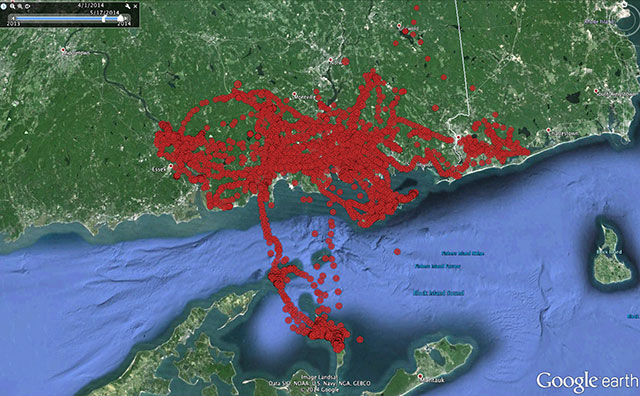 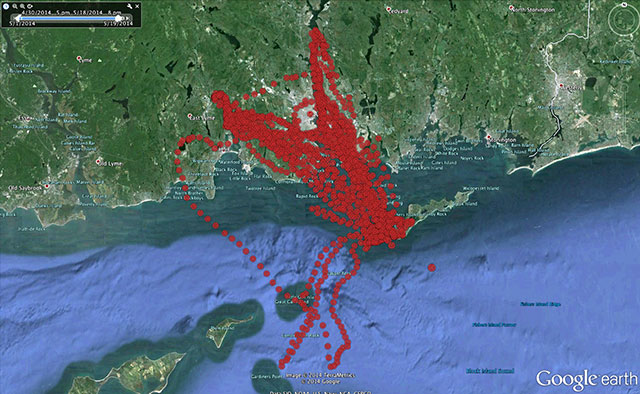 Edwin spent much of the summer last year in Connecticut, most frequently around Lake Konomoc in Montville and nearby water sources. In August he began to frequent the Hamburg Cove area of the Connecticut River. By mid-August he continued west and began an early migration down the east coast toward a likely, but unknown (to us) destination in either the Caribbean or South America. After reaching Florida he flew across Cuba, followed in quick order by Haiti, the Dominican Republic and Columbia. We tracked his migration across northwestern Venezuela until September 29 when his transmissions abruptly ceased. He “went dark” (i.e. out of cell tower range) at the base of the Cordillera De Mérida Mountains in Venezuela—a northeastern extension of the Andes Mountains. At that point, Edwin had been migrating for approximately 44 days.

On March 8, 2014, Edwin suddenly reappeared in Barinas, Venezuela, just north of where we had lost track of him more than five months earlier. Back data received in later transmissions revealed that he had spent the winter along the Rio Solimões in Lago Amana, Amazonas, Brazil, on the upper stretches of the Amazon River. He started his migration north, passing through Venezuela, the Caribbean, the Dominican Republic, Haiti and Cuba. On March 16, he re-entered the U.S. by way of the Florida Keys. He spent a few days in Florida before flying north, up the east coast, always over land. He went “dark” again over Trenton, New Jersey, during a storm on March 24. In the late afternoon on March 25 Edwin’s data was picked up again placing him along the Niantic River in Connecticut. 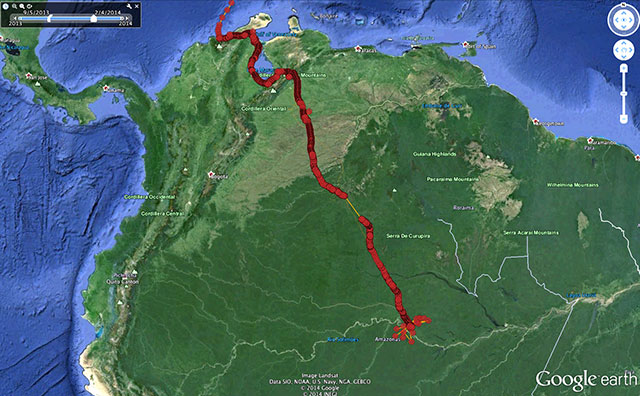 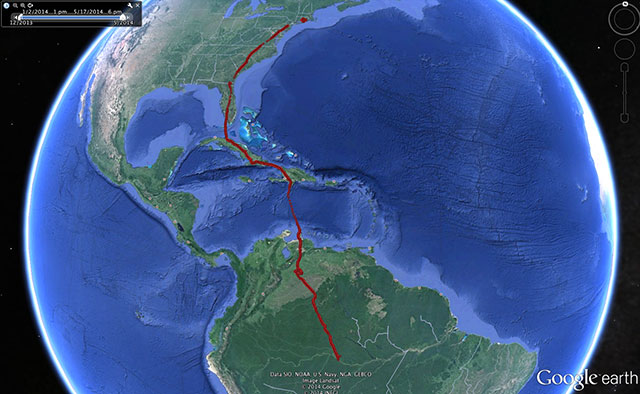 Since his return to the area, Edwin has spent most of his nights on the Niantic River making frequent trips to nearby Latimer Brook and Banning Cove to fish. From there he has also made numerous short trips back and forth across the Thames River to the Groton Reservoirs, as well as traveling west to Essex and the Selden Neck State Park area of the Connecticut River when alewife and shad were running strong. On a few occasions, Edwin has returned to Fishers Island and stayed overnight. His range includes Essex, Conn. to the west, Gardiners Island to the south, Quonochontaug Pond between Westerly and Charlestown Rhode Island to the east, and Pachaug Pond in Griswold, Conn., to the north.

On the morning of May 14, Edwin was at the Mill Cove area of the Thames River between Quaker Hill and Gales Ferry but left around 9:30 a.m.—just minutes before Charlie entered the area to fish (see below).

Rob Bierregaard successfully tagged a second Fishers Island osprey with a cell tower transmitter on May 1, 2014. The location was the Transfer Station nest on Fishers Island’s west end. This newly tagged bird has been named Charlie in honor of artist and life-long Fishers Islander Charles B. “Charlie” Ferguson, who ably served as president of the H.L. Ferguson Museum for 25 years, retiring from that position in 2003. We started to receive data from Osprey Charlie on May 1 that soon revealed that that he was fishing both on island and making trips to the mainland to hunt. For reasons unknown, Edwin abandoned the nest on Fishers Island last year and became a Connecticut-based bird. In contrast, Charlie has been dutifully returning to Fishers Island from his mainland trips bringing food to his mate. He spends his nights either near the nest, or in a cluster of trees near Winthrop Drive. He usually makes 2-3 trips to the mainland each day, but also extensively fishes the shoreline of the west end of Fishers. Charlie’s range is Gales Ferry to the north, Niantic to the west, the middle of Fishers Island to the east, and just off Fishers Island to the south — not quite reaching Gardiners Island.

In summary, Edwin and Charlie are polar opposites as far as behavior goes. Since he returned in March, Edwin has been the consummate wanderer, a bachelor dedicated to following the fish sources, but showing no indication from the outset that he intended to settle down, or return to last year’s nest near Beach Pond. It will be fascinating to see if this pattern shifts at all in the seasons to come. Charlie, on the other hand, is a dedicated mate, consistently delivering fish to the nest, protecting the nest when on Island, and assisting in nest tending while preparing for new offspring. His mate is currently sitting on a clutch of four eggs.