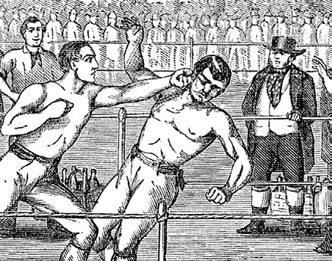 If a poll were taken today asking what sport was most associated with Fishers Island, without doubt sailing or golf would top the list. For those with longer memories, horse shows and dog trials might also come to mind. However, believe it or not, there was a time in the mid-to-late-19th century when Fishers Island was best known in the region and around the country as a site where illicit prize fights were staged beyond the reach of the law. These fights initially pitted boxers against each other in brutish bare knuckle contests that later, as the sport evolved, were fought under more refined Marquess of Queensbury rules using gloves.

Through the end of the 19th century, prize fights were prohibited in most areas of the United States, including New York and Connecticut. Considered magnets of criminality, they were frequently raided and broken up by police. Connecticut, with its long tradition of Blue Laws, was particularly intolerant of the “brutish spectacles” and the rampant gambling that accompanied them. Consequently, boxing handlers, promoters, scam artists and “fistic fanciers” throughout our region had to scramble to find venues where furtive fights could be held without interruption. Fishers Island was conveniently proximate to the mainland, lacking in local law enforcement, and most importantly, jurisdictionally beyond the reach of the Connecticut authorities. All these factors combined to make it a perfect place to stage a fight. The newspaper Brooklyn Eagle addressed this subject in an 1871 article: “Fisher’s Island belongs to New York. For which reason the prize fighters, whose knowledge of jurisdiction is so extensive, choose it as a theatre for head punching, preferring to take the risks of New York law to exposing themselves to the tender mercies of Connecticut, which are cruel.” (Brooklyn Eagle, 10/6/1871)

Historical records and newspaper clippings have been located that document three professional prize fights held on Fishers Island during this period; plus a fourth fight, the biggest of them all, that was planned for our shores, but held elsewhere at the last minute, presumably to confound the authorities:

On April 9, 1867, a bare-knuckle prize fight on Fishers Island matched George Rooke against Charles Collins, a.k.a. “The Cast Iron Man.” The fight took place near today’s Walsh Park site for a purse of $500 a side. Please note that $1,000 in 1867 dollars equals approximately $100,000 in today’s dollars, when calculated using workers’ wages as the factor. (This fight will be examined in detail later in this article.)

On March 2, 1870, a major bare-knuckle prize fight was set for Fishers Island, but on the day of the match the location was changed to Mystic Island (today’s Ram Island), considered at the time to be part of New York. This latter site offered the same jurisdictional advantage as Fishers Island with the added convenience of being much closer to the mainland. At Mystic Island, Sam Collyer of Baltimore battled Billy Edwards of New York for the lightweight championship of the world. He finally won in the 41st round by knock out. The purse was a hefty $1,000 a side.

On August 2, 1887, two pugilists using Marquess of Queensbury Rules and two-ounce gloves fought the last known prize fight on Fishers Island. Mott (Mort?) Goss of New London beat Jim Nelson of Brooklyn, N.Y. for a purse of $500 a side (also reported as $250 a side). The New Haven Register informed its readers that “the steamer Julia, carrying the principals and about 150 spectators who paid $5 each, left the Pequot house [New London] wharf at 2 a.m., and an hour later a landing had been made and a ring pitched on the west end of Fisher’s Island, near Little Hay harbor.” (New Haven Register, 8/8/1887) The fight began at daybreak, lasted 57 minutes, and was declared for Goss after a foul in the sixteenth round.