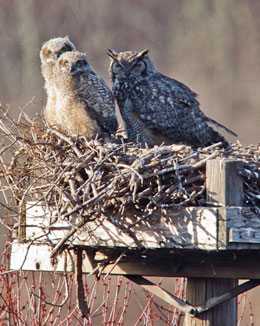 The early spring on Fishers Island brought with it some interesting events in the avian world. Most remarkable was the occupation of the Rafferty osprey nest by a pair of Greathorned owls (Bubo virginianus). This pair successfully reared two chicks and many of us were treated to spectacular views of the parent owl and the two downy offspring. The Ospreys (Pandion haliaetus) were not so enthralled by this turn of events, arriving to find their home occupied by such fearsome tenants. Great-horned owls are efficient predators and will take a wide variety of prey, including other raptors. An Osprey would not want to attempt reclamation of its nest from a Great-horned owl. Whether or not the evicted pair was involved cannot be known for certain, but shortly following the return of Fishers Island’s Ospreys, there was a territorial dispute involving the nest on John Ski’s property. Aerial “dogfights” commenced on a daily basis and continued for several weeks (see photo gallery). As of this writing, the owls have vacated the Rafferty nest, a pair of Ospreys appears to be reoccupying the nest, and harmony has returned within our Osprey population. As young Ospreys mature and return to their birth place to nest (usually after 4 to 5 years), they may find that the island lacks sufficient nest sites. Thus, we may need to increase the number of platforms in order to accommodate all. We are extremely fortunate that Fishers Island continues to provide and preserve suitable habitat for birds, large and small.

Since our last newsletter, the Museum has enjoyed another eventful year and continues to be an important cultural asset for the community. We are looking forward to our new exhibit, “The Houses of Fishers Island, Part II,” covering the period from the mid-1920s through World War II. Our Museum Director, Pierce Rafferty, has unearthed some wonderful images and the show promises to be excellent. The exhibition is once again generously supported by Charlie Wilmerding’s Altus Partners and the Chubb Group of Insurance Companies.

We have lined up a number of programs and trips for the summer. A highlight will be the Smith Vaughan lecture, which is given annually on a natural history subject. This year we are most fortunate to have James Prosek, author, artist and naturalist as our speaker. Mr. Prosek has recently authored a book entitled Eels: An Exploration of the World’s Most Amazing and Mysterious Fish. Also in July we will be making a trip to visit nearby Great Gull Island, home of the largest tern colony in the northern hemisphere and where the Museum of Natural History maintains a research station headed by scientist Helen Hayes.

The Museum would not be what it is today without the support of many Fishers Islanders and I extend my thanks to all who have contributed to our endeavors. I also wish to thank all of the Museum Board members for their time and efforts on behalf of the Museum. Board members have given many hours of volunteer time ranging from event planning and assistance with collections, research and exhibits to financial advice and fundraising.

We are looking forward to a busy and active summer kicked off by our opening party on Saturday, July 2nd. If you have not yet visited the Museum, you are missing an island treasure and we encourage you to do so soon. For those who stopped by last summer, plan to do so early and often in 2011!

I look forward to seeing each and every one of you at the Museum!