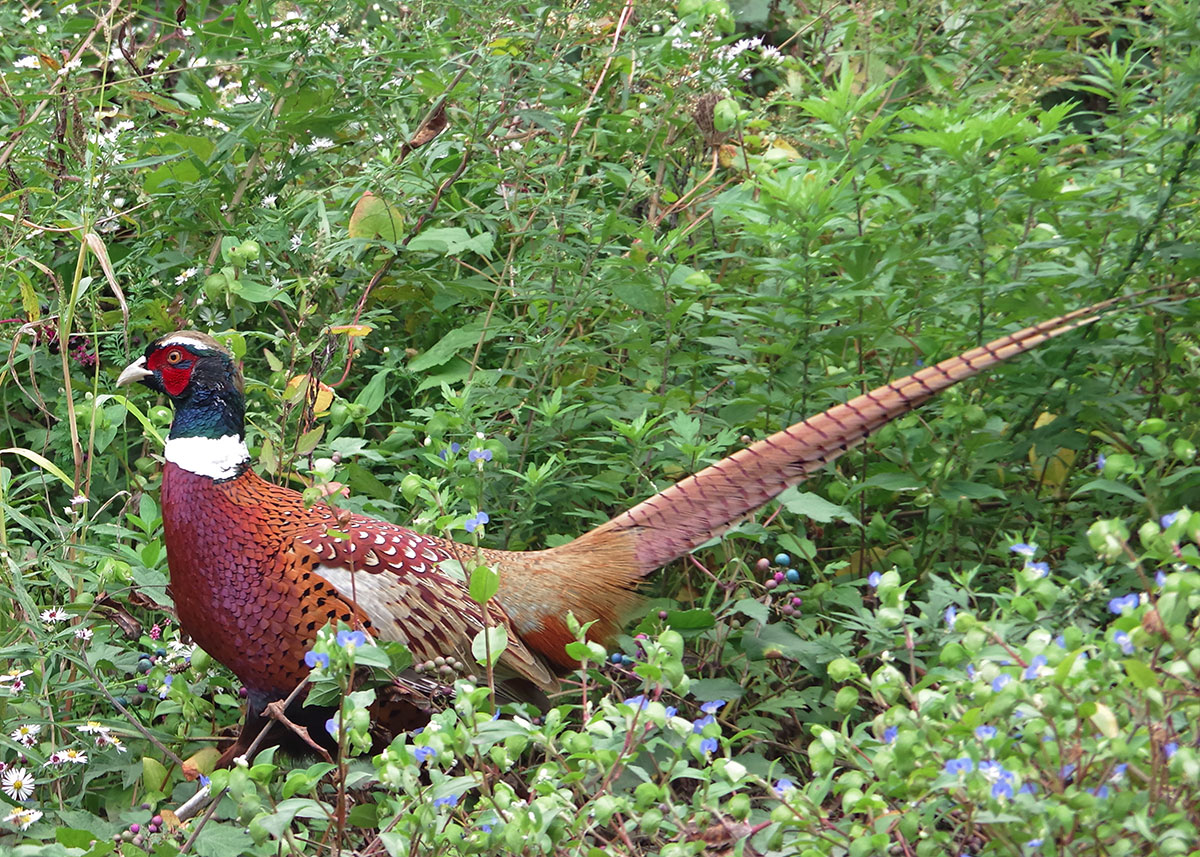 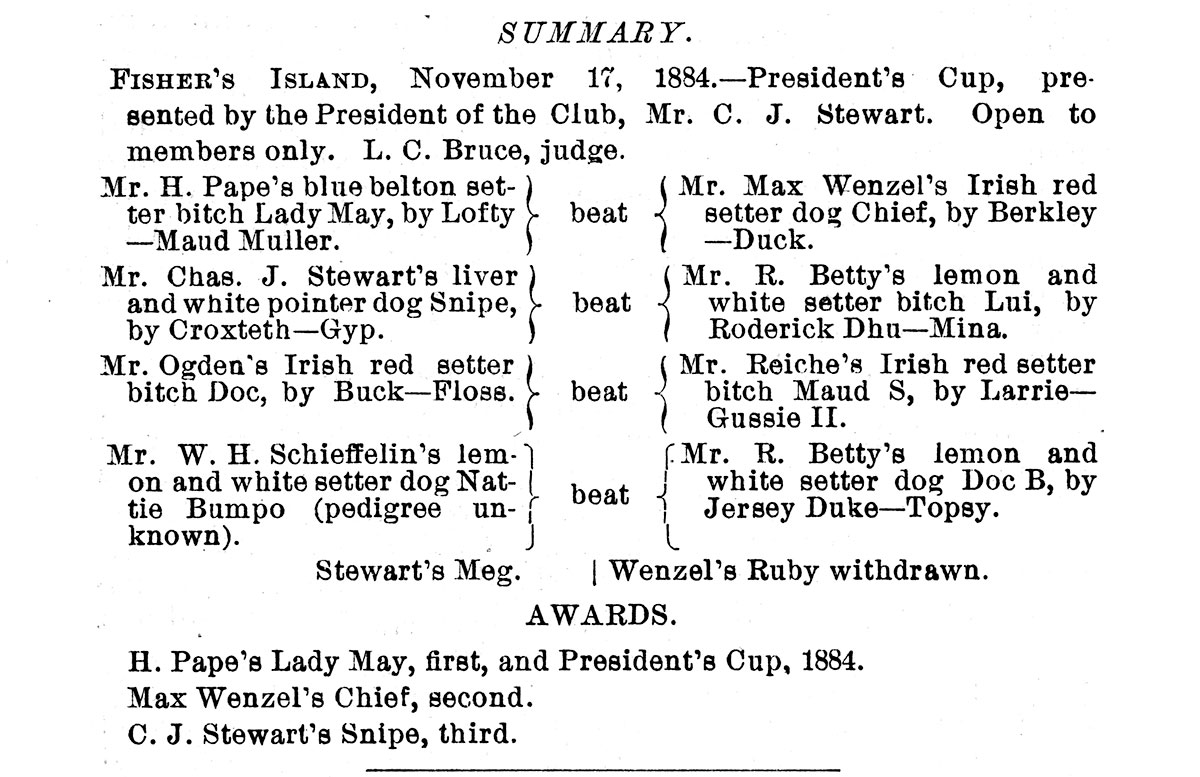 In 1884, the estate of Robert R. Fox, primary owner of Fishers Island, leased the island’s east end to a private sportsmen’s club. The new club, a precursor to the Fishers Island Sportsmens Club, operated under the name “Fisher’s Island Club.” Its members, sportsmen from the New York metropolitan area, established a game preserve and imported 200 pairs of quail, four pairs of German hares, and five pairs of English pheasants for their first field trials, held on November 17-18, 1884. These were the first dog trials ever held on Fishers Island and quite likely the first pheasants to arrive on our shores. 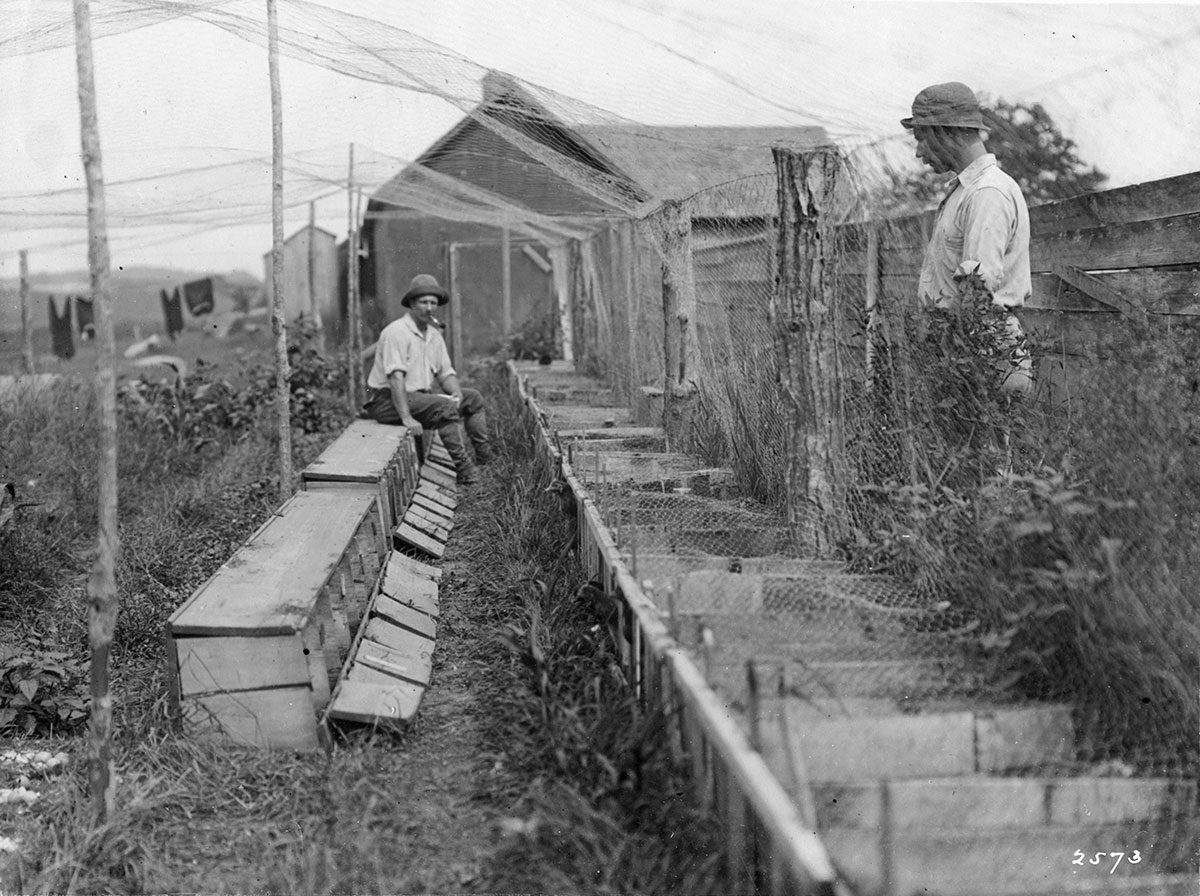 In the 1880s and 1890s, the east end was stocked with Tennessee quail, larger western quail, Hungarian Partridges, and on one occasion, Prairie Chickens. All proved difficult and expensive to establish.

By 1905, the focus had shifted to importing and raising Ring-necked Pheasants as the most economical bird for shooting purposes. A farm was established at the east end near the gamekeeper’s residence, located in the rough between the 1st and the 18th holes.The raising of pheasants was a main component of that farm. 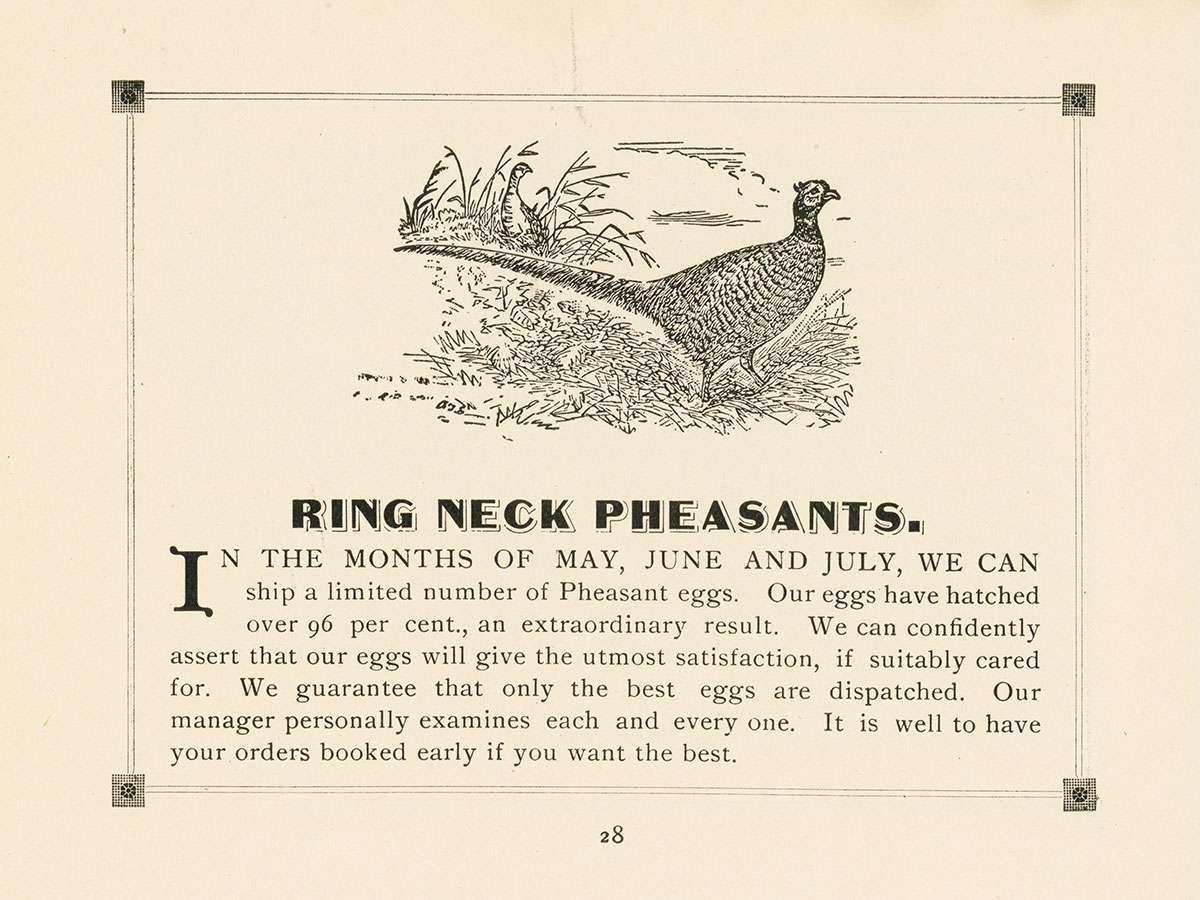 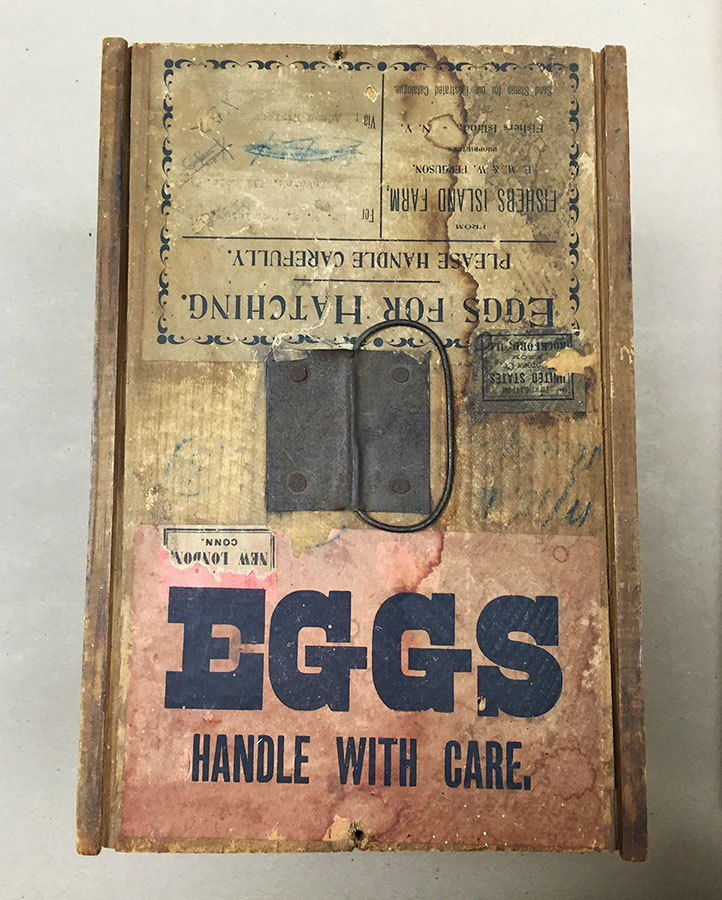 Pheasant eggs for hatching were shipped to customers both in the United States and abroad. 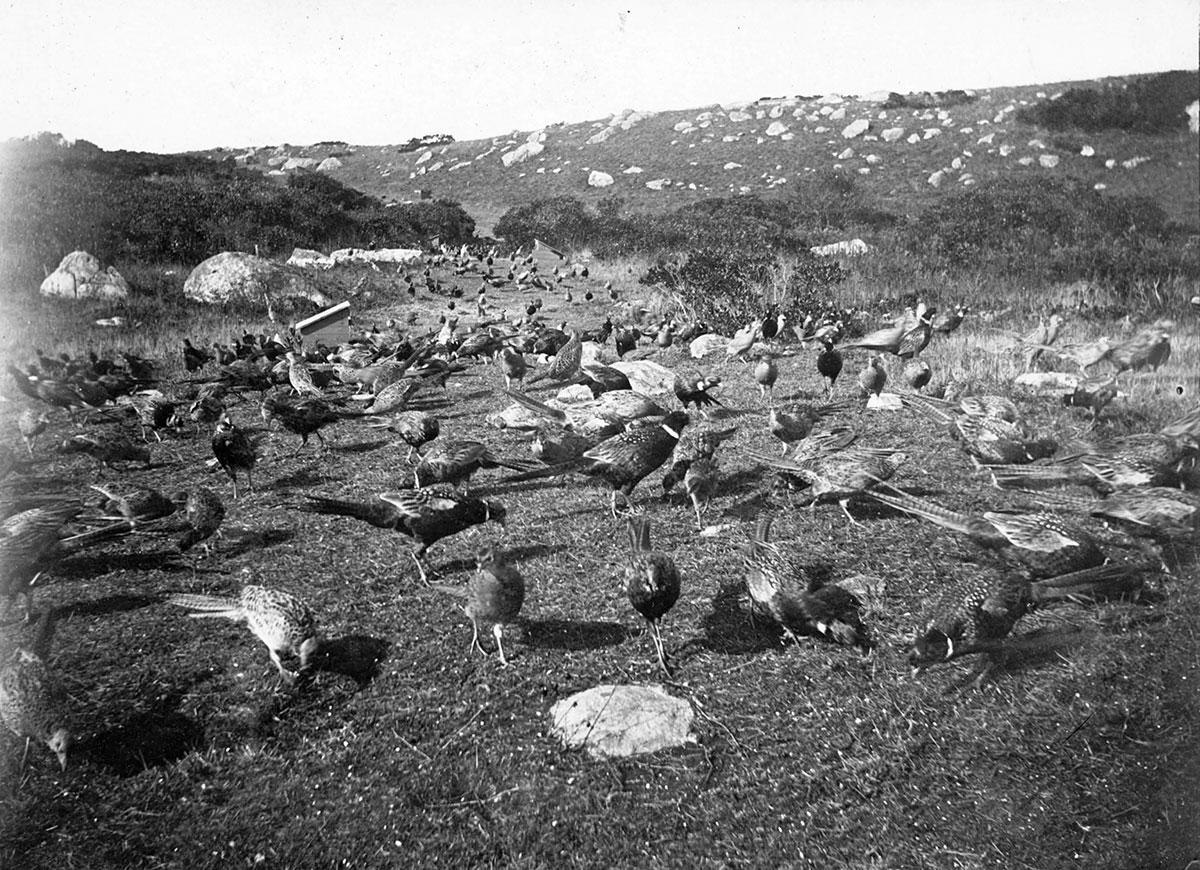 Note the distinctive white ring on the male birds in this photograph. Ring-necked Pheasants were first imported to America in the 1880s from Asia as game birds and quickly became very popular in sporting circles. The Poultry Farm had certainly adopted them as the desired breed by 1900, but perhaps even earlier, in the 1890s. 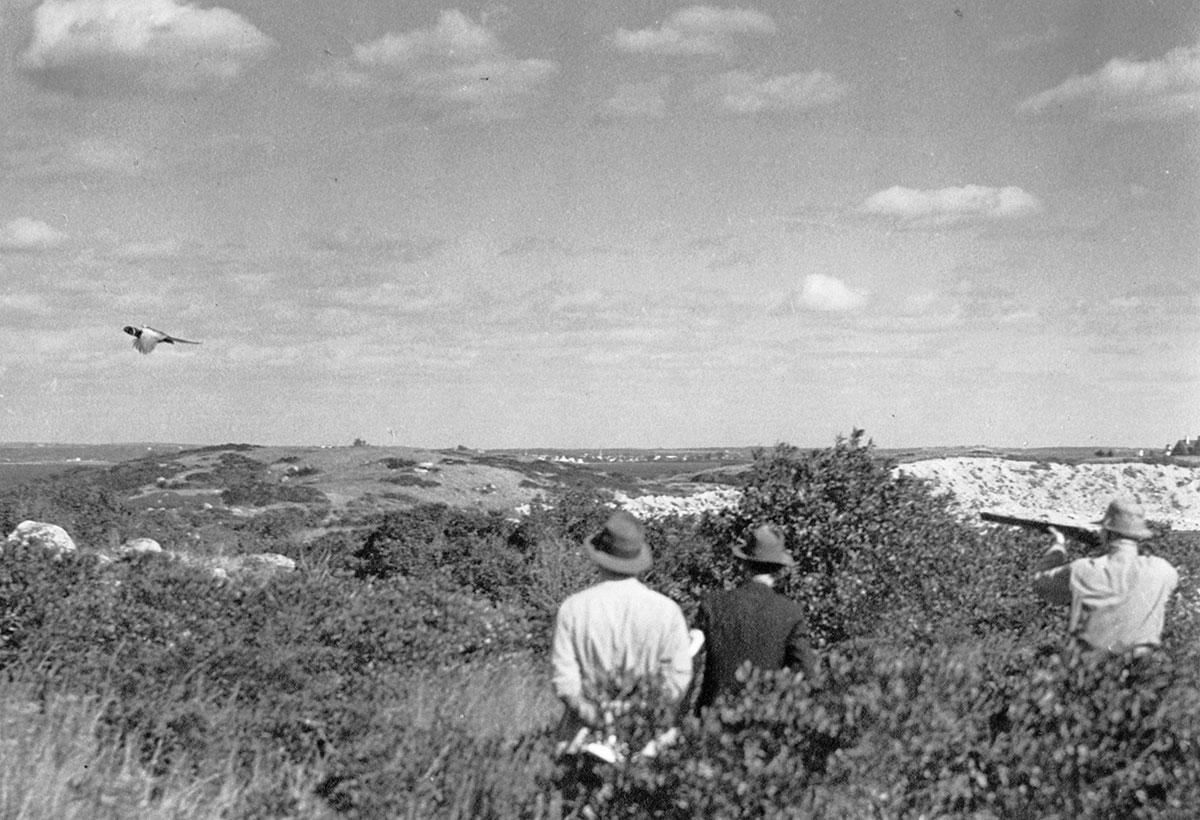 The Ferguson family helped to organize the English Springer Spaniel Field Trial Association and hosted its celebrated field trials on Fishers Island from 1924 through 1948, excepting the war years. The island provided an extraordinary setting for the highly competitive dog trials. Ring-necked Pheasants were at the center of the action at every trial. 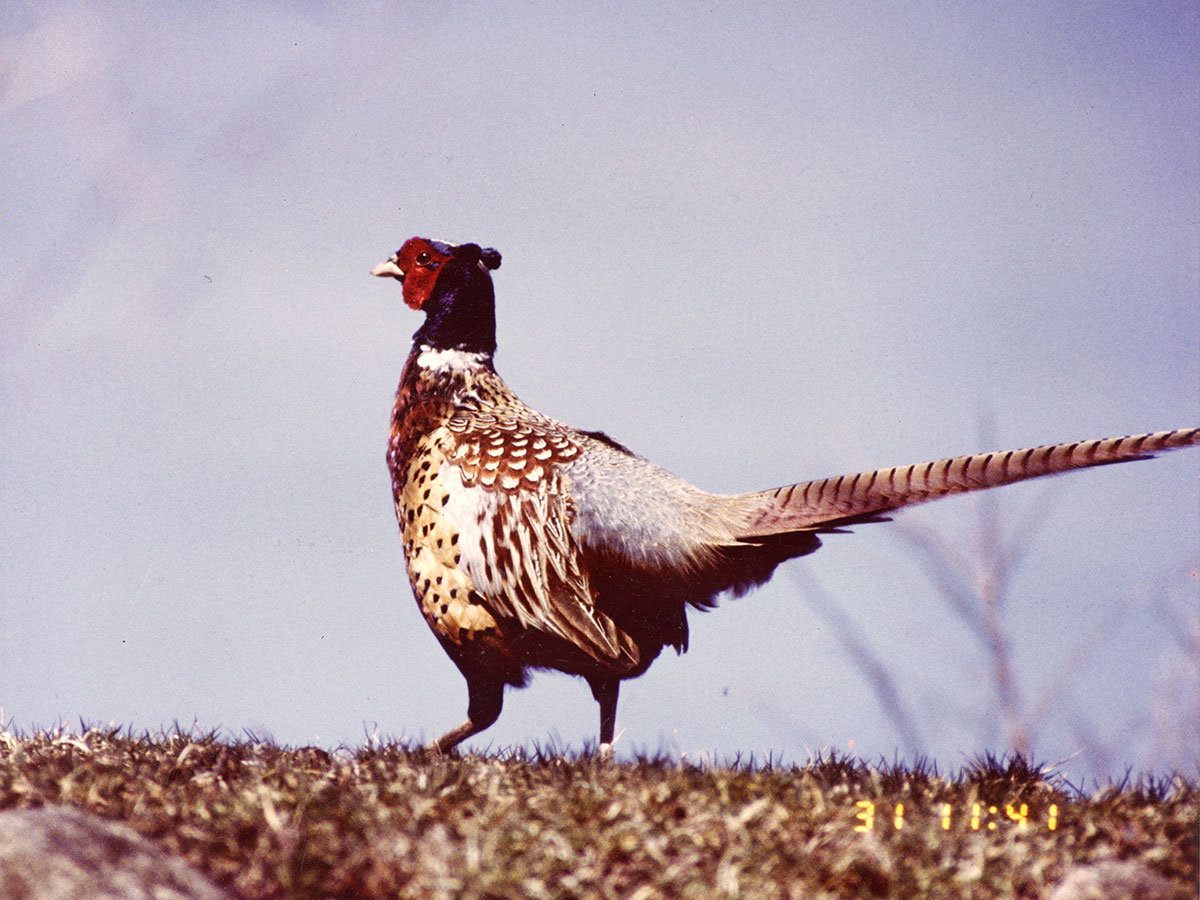 The Fishers Island Poultry Farm and the Game Keeper’s Farm were both gone by the early 1920s, displaced by the new residential colony being established at the east end (the Olmsted Plan development). The Fishers Island Sportsmens Club, which had first been established in 1888, also shut down in the mid-1920s as much of their leased shooting area was converted into residential lots. Organized hunting, however, never stopped as the newly established Fishers Island Club filled the raised-pheasant void by importing Ring-necked Pheasants for shooting purposes. Each hunting season Club members who paid the established fees hunted over the Club’s own grounds. After the reestablishment of the Sportsmens Club in 1957, that venerable institution took over the business of importing pheasants for shooting purposes, primarily on leased Club grounds, and continues doing so to date. 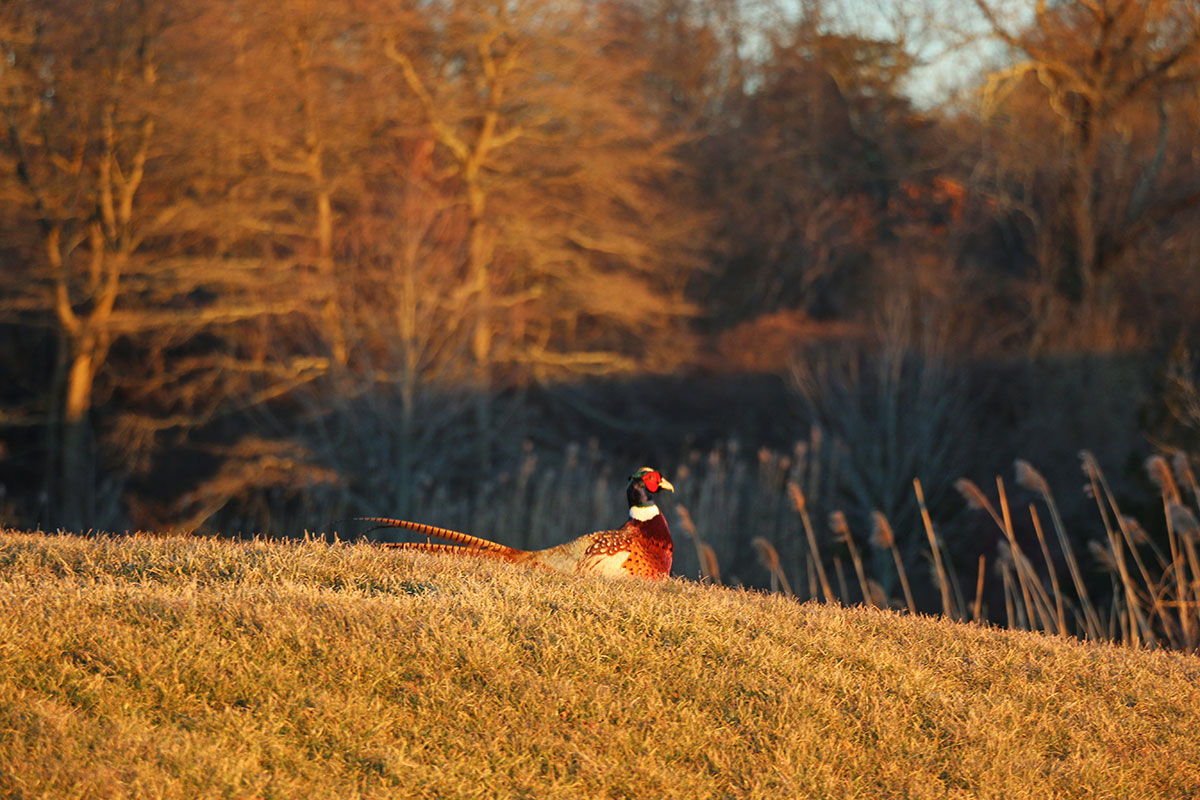 The pheasants seen at the side of the road or in fields on Fishers, primarily at the east end, but occasionally at the west end, are those that have successfully managed to avoid fulfilling their sporting purpose. 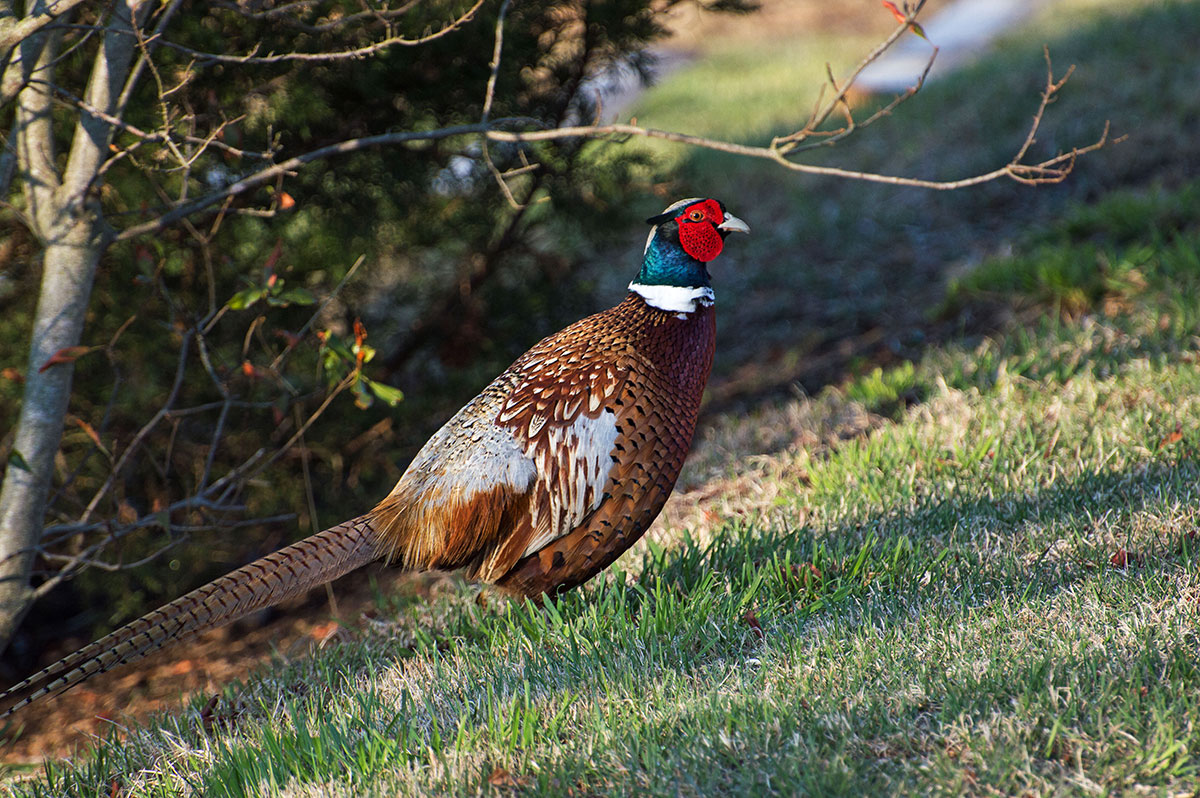 This pheasant, photographed near the Movie Theater, was either released on the Parade Grounds by the Sportsmens Club (as sometimes happens when there are excess birds), or coincidentally made the right choice and headed west, ending up six miles away from the shooting area. Option number one is most likely. 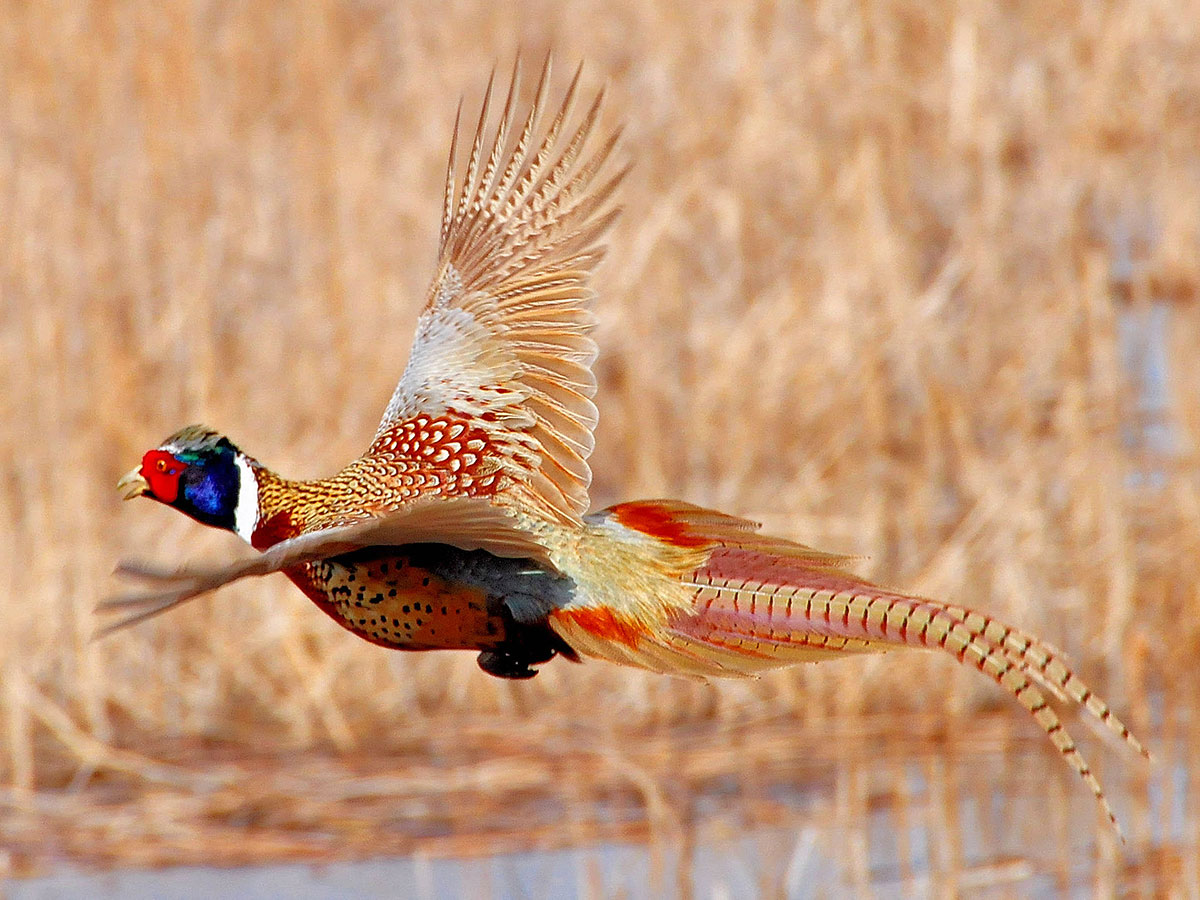 There is a reason why photographers tend to take more pictures of male Ring-necked Pheasants than females. The males have multi-colored plumage that is over-the-top gaudy, whereas females have relatively monotone coloration, brown overall marked with black. Note: This photograph was not taken on Fishers Island. 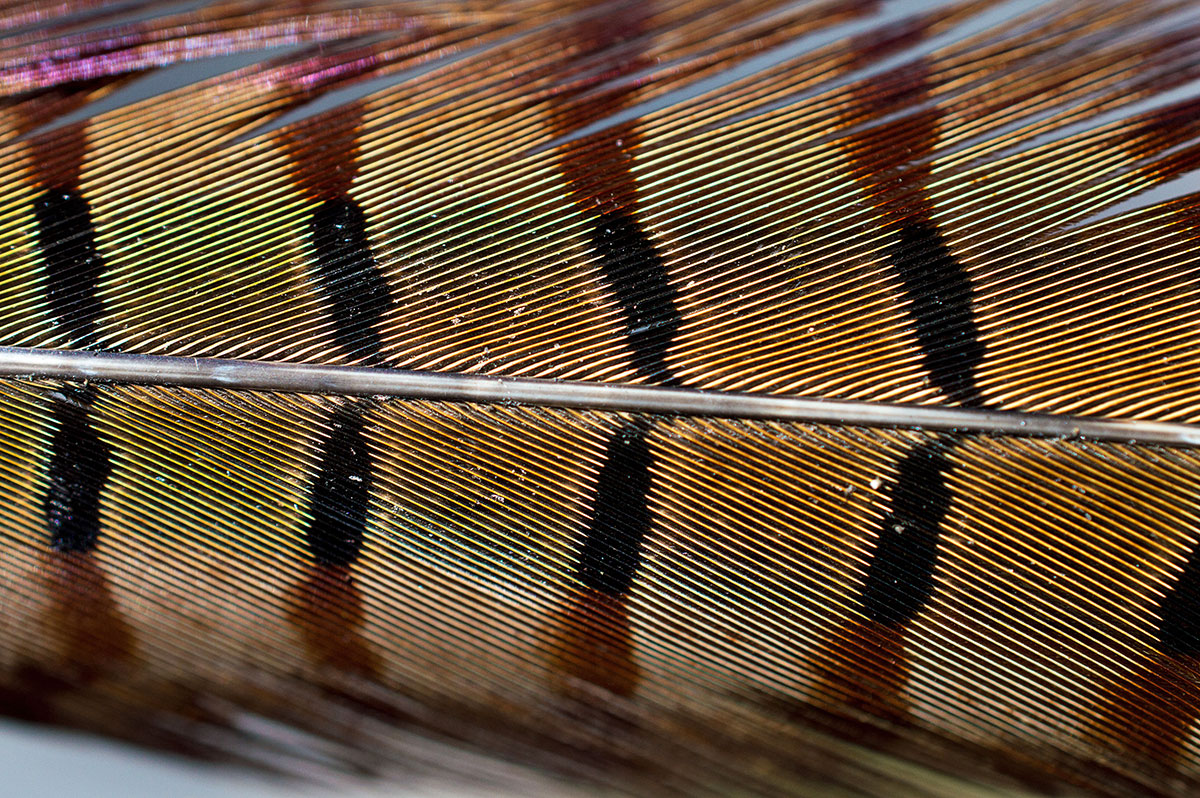 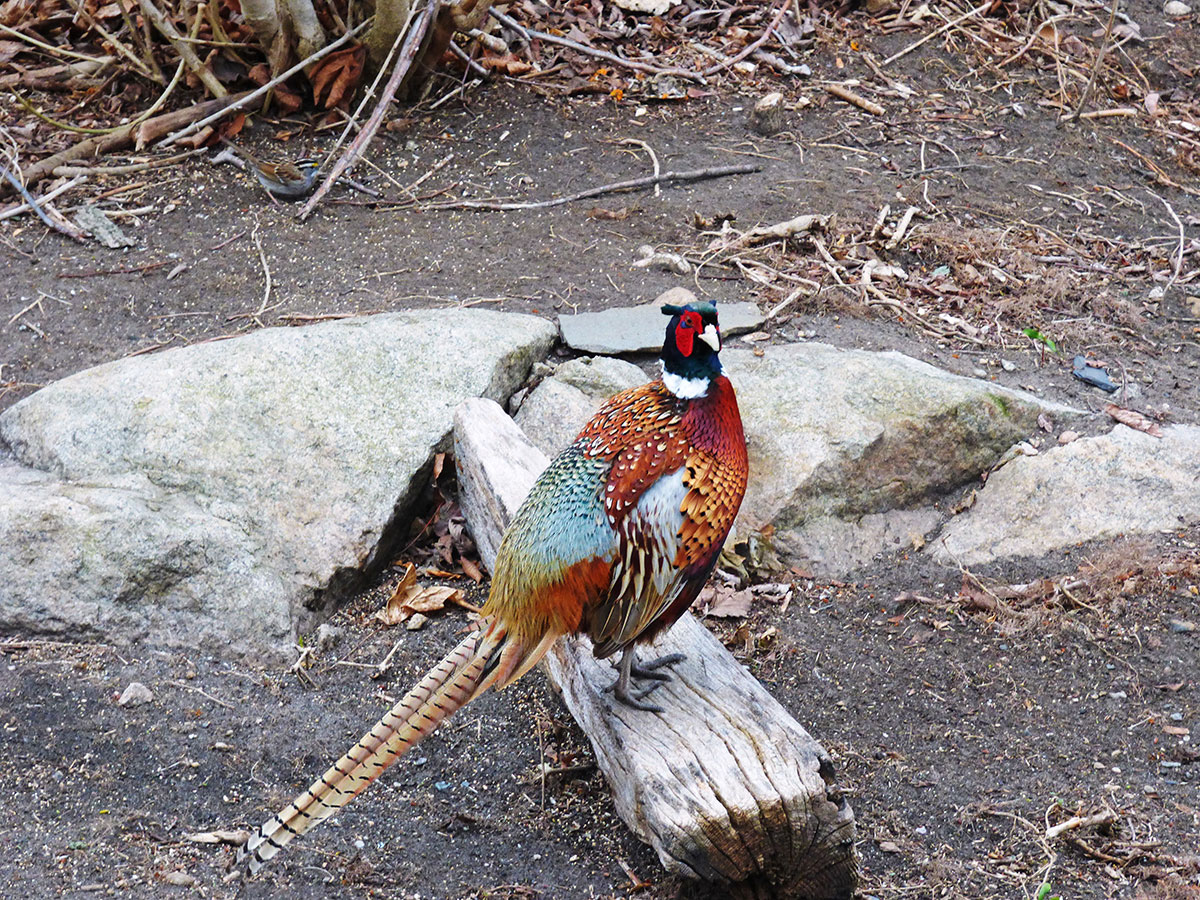