During the first two weeks of August, the juvenile osprey returned to Middle Farms nest multiple times daily for feedings.

For the most part, they now wanted to feed themselves, so battles for the fish became a regular sighting and the prey was often taken away from the nest to be eaten nearby. It is not clear if the young are joining on the hunt yet, but if not, it is expected that they soon will. 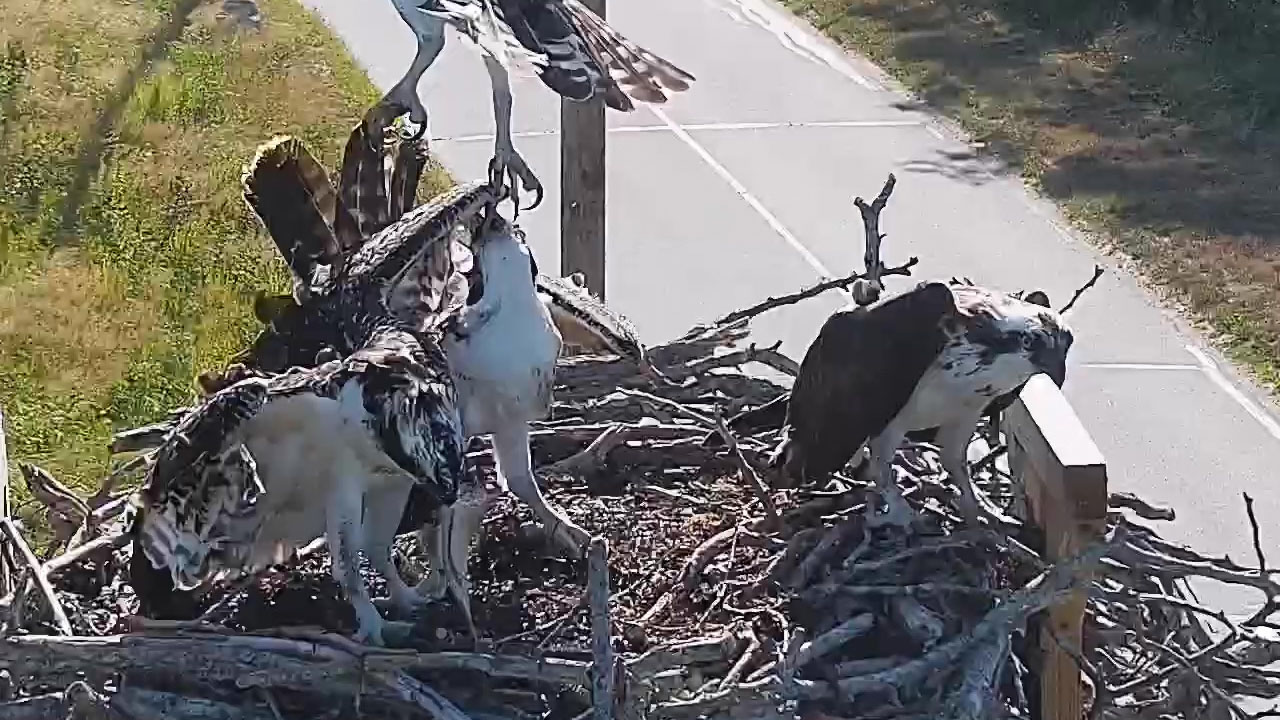 On August 7, 2022 one of the young osprey grabbed the dads claw by mistake – while the sibling grabbed the fish and mom stayed clear.

The video clips below captured a number of the feedings over the two weeks since the osprey first fledged on July 31, 2022. In some of the clips you may hear osprey that are beyond the view of the camera. They are sometimes perched above on the camera pole, or a telephone pole – or other nearby perch.

AUGUST 1ST: This mid-day feeding session begins with one juvenile osprey on the nest. The adult lands with a fish and the juvenile tries to grab it but the adult does not give it up.

NOTE: After this clip – the adult continues to eat and feed the young osprey for about a half hour until the sibling returns to the nest and joins the feeding. All three eat and then one of the young leaves the nest, followed by the adult shortly after. The remaining osprey stays on the nest for a while longer.

AUGUST 2ND: This clips begins with the adult female watching over her resting young. The adult male delivers a fish and the mom tries to take it but one of her young fights her for it and wins. Despite cries by the sibling, it does not share and the mom does not take the fish back.

AUGUST 2ND: A subsequent feeding three hours after the previous clip takes place after one of the adult osprey brings another fish to the nest. The juvenile on the nest tries to take the fish but the adult does not give it up. The adult feeds the young.

AUGUST 3RD: The adult male osprey delivers a fish for a morning feeding and one of the juveniles fights the mother for it and eventually wins.

AUGUST 3RD: About an hour later, the sibling is also on the nest and snatches the remnants of fish. From the shadow cast and noises, it appears that the mother may be watching from the camera pole.

AUGUST 4TH: During a morning feeding, one of the young osprey becomes impatient and snatches the fish from the adult.

AUGUST 4TH: The adult male osprey delivers fish to the nest during the late afternoon and the female begins to eat. Shortly thereafter, one of her young lands on the nest and takes the fish from her.

AUGUST 5TH: After a feeding that day, one of the young osprey flew away from the nest, leaving the fish behind. The mother then began to feed until one of the young returned and snatched the remains of the fish from her.

AUGUST 6TH: During a morning feeding, one of the young osprey becomes agitated while the adult watches. It is not clear if the juvenile wants help or is agitated by the presence of another on the nest during the feeding.

AUGUST 6TH: While the young osprey was still eating the sibling returned to the nest and initially appeared to be waiting for a turn, but eventually tried to take the fish. After a fight ensued, a chirp could be heard from above and then one of the adults leaves the camera pole – causing the fight to end.

AUGUST 6TH: Mid-day, two shadows can be seen heading for the nest. One of the adult osprey lands first, with a fish, and fends off one of the juveniles who tries to land.

AUGUST 7TH: The mother osprey and two young are on the nest during the afternoon when the dad delivers a fish. A battle ensues between the siblings as the mom steps aside, but one grabs the dads claw by mistake and appears stunned after the dad pulls away – while the sibling gets the fish. The winner eventually takes the fish away from the nest to eat.

AUGUST 9TH: During this mid-day feeding, one of the young osprey can be seen eating a fish that was delivered less than an hour earlier. An adult brings a second fish to the nest and gets attacked for it.

AUGUST 9TH: After the second fish delivered to the nest is abandoned by the young, one of the adult osprey retrieves it.

AUGUST 12TH: When dad delivers a fish in this video clip, the waiting juvenile grabs his leg by mistake and gets caught up. Meanwhile, the sibling swoops in and gets the fish. The first osprey tries multiple times to recover the loss – but the sibling will not give it up and eventually leaves the nest with it.

AUGUST 13TH: Two fish were delivered to the nest during this evening, about an hour apart – which enabled the camera to capture both juvenile osprey eating at the same time.

AUGUST 13TH: One of the young osprey takes a break during the evening feeding, but the other warns it to stay away. Shortly after, the mom joins the feeding.

AUGUST 13TH: After the mom eats for a while the young osprey lets her know it is still hungry, and she feeds it.