Sometime around six weeks after hatching, the osprey chicks at Middle Farms nest began to test their wings. After seven weeks, they were hopping around the nest more often exercising their wing muscles – and began to achieve lift-off from the nest. It is expected that they will be leaving the nest for short flights any day now.

The video clips below captured the osprey chicks testing their wings from July 20th to July 28th along with some other nest activities. 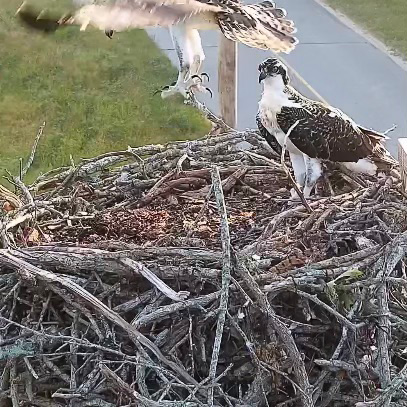 In the first two minutes of this clip from the morning of July 20th, the young osprey chicks can be seen flapping their wings and catching some air. Afterwards, one finds leftover fish remains in the nest and tries to eat it until the other steals it away and finishes it off. Mom can be heard nearby (possibly on the camera pole). Eventually mom drops down to the nest and seems to defend the chicks from something from above.

Shortly after 7 am on July 20th one the osprey chicks can again be seen exercising its wing muscles. The other seems preoccupied with a bird on the lower right of nest (until it flies away), then the young osprey moves to the other side of nest and begins to exercise it’s wings.

About a week after the chicks first began exercising their wing muscles they can be seen more often testing their wings. In this clip, from early afternoon on July 27th, it sounds like the adult female (after leaving the nest) may be encouraging flight from nearby. One of the young osprey catches air and briefly goes beyond our field of view.

A little before 2 pm on July 27th, one of the juvenile osprey tests its wings and achieves lift-off from the nest and beyond our view briefly.

In the early afternoon on July 28th, while waiting to be fed, one of the juvenile osprey tests its wings and achieves lift-off from the nest – beyond view again.