The first of the three osprey eggs at Middle Farms nest hatched the morning of June 4, 2022 around 8:07 AM.

The short video clips below provide some highlights from the chicks first day. 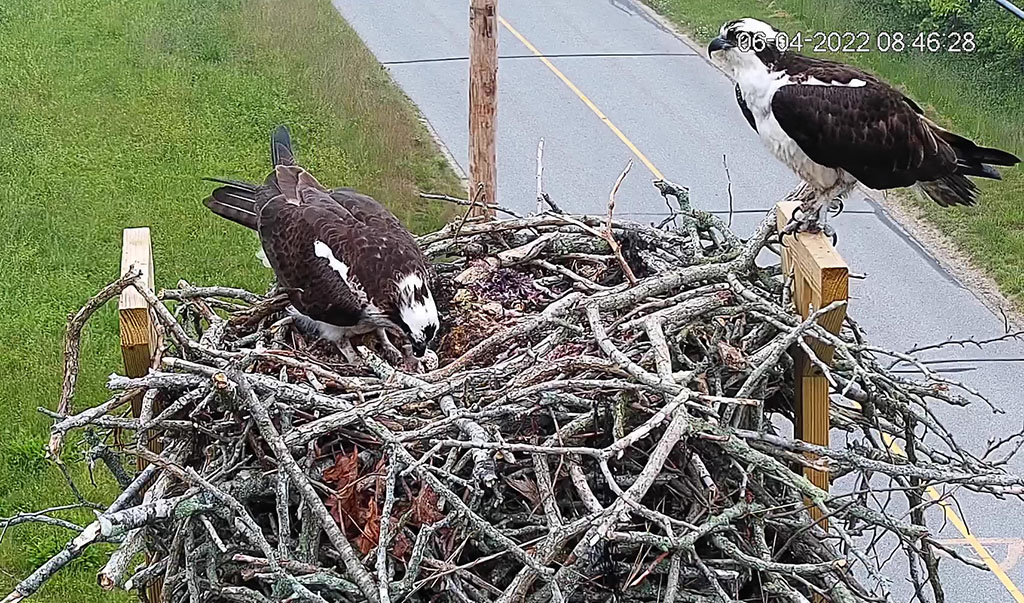 Vicki Rafferty was watching the live web cam from California and provided a screen capture that confirmed the egg had hatched.

Just prior to this video clip, the adult female is woken by movement of the egg. As she stands up at 8:07:51, you can see a slight movement appearing at the upper left side of the egg. After she briefly leaves the nest,  you can more clearly see the head of the chick begin to emerge.

The adult male returns to the nest with a stick around 8:45 am on June 4th and receives his first viewing of his new chick.
NOTE: after this short clip, he leaves and returns multiple times with more sticks to fortify the nest.

Around noon on June 4th, the adult male osprey brings fish to the nest. As the adult female eats, you can see the chicks head bob up and down, then around 12:27:38 she appears to attempt to feed it, but stops when it does not aggressively try to eat.

In the early afternoon on June 4th, the male brings more fish to the nest. This time it appears that the chick is more engaged and the female may be feeding it this time, but that is not clear from the web cam viewing angle.

Shortly after midnight, the female osprey is awakened and tends to the new chick, and the two remaining eggs.

On the morning of June 5th, after the male osprey brings fish to the nest, we are provided our first clear viewing of the female feeding the chick.