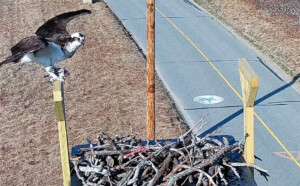 The ospreys generally show up a few days before St. Patrick’s Day, “about the same time that the spring peepers start singing,” says Museum Trustee Terry McNamara. They are often seen in flight days or even weeks before they settle on a nest. In 2021, resident osprey expert and former Museum Trustee Ken Edwards spotted an osprey in flight on March 14. The first sighting on camera was of one osprey on March 31. This year (2022) the first sighting in flight was on March 20 and the first confirmed landing on nest was March 23.

Females lay eggs, which are speckled with beige and brown spots, anywhere between mid-April and late May.

The clutch size is typically one to four eggs. The incubation period is 36 to 42 days and begins with the first egg and eggs hatch in sequence.

The first chicks may hatch as many as five days before the last one. Once an egg hatches, the nestling will take about seven to eight weeks to reach its first fledgling flight, and will remain dependent on its parents to catch fish for a variable period thereafter. The oldest chick often dominates over the younger nestlings. If food is limited, this behavior can cause younger chicks to starve to death.

The nestling period is 50 to 55 days in length.

Nestlings are brooded and fed fish for about 40 days after hatching. After this point, nestlings begin to resemble adults, but have reddish-orange eyes and feathers edged in buff. The osprey is the only hawk on the continent that eats almost exclusively live fish.

Families remain together near the nesting site through July, as fledglings learn to fly and then fish.

Adults begin to migrate to their wintering grounds as far south as South America as soon as fledglings become independent. Juveniles usually migrate during the last week of August.

These large raptors are known to live for approximately 15 to 20 years.