Skip to content
U-Boats In New England by Eric Wiberg

Today, observing the distinctive profile of an attack-class submarine cruising off the shores of Fishers may inspire of patriotism, gratitude, or curiosity. With the advent of World War II, however, seeing a conning tower appear out of the fog was certain to get the heart racing with a completely different set of emotions—and for good reason.

Starting weeks after Hitler declared war on the United States in mid-December 1941 and lasting until the war with Germany was all but over, 73 German U-Boats sustainably attacked New England waters, from Montauk, N.Y. to the tip of Nova Scotia at Cape Sable. Fifteen percent of these U-boats were sunk by Allied counter-attacks, five surrendered in the region, and three were sunk off New England—Block Island, Massachusetts Bay, and off Nantucket. There were 34 Allied merchant or naval ships sunk by these subs. Over 1,100 men were thrown in the water and 545 of them made it ashore in New England ports and 428 were killed. Importantly, saboteurs were landed at three locations: Long Island, Frenchman’s Bay, Maine and New Brunswick Canada. In this illustrated talk maritime historian Eric Wiberg chronicles these stories and more. 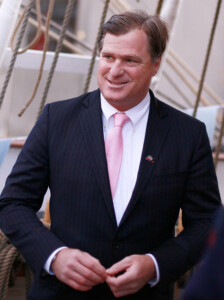 Maritime historian Eric Wiberg moved to New England from the Bahamas for boarding school. He became a yacht captain (US Merchant Marine license, 1995), obtained a maritime law degree (2004), and a masters in marine affairs (2005). The founder of Echo Yacht Delivery (1999), Eric sailed over one hundred vessels globally. A Boston College graduate, he has studied geography in Oxford, law in Lisbon, and film in New York. The author of some 20 non-fiction books, his focus is on maritime casualties. He commercially operated a tanker fleet from Singapore, sold shipping news, marketed tugs to Europeans, and briefly salvaged a tanker platform in the Bahamas.