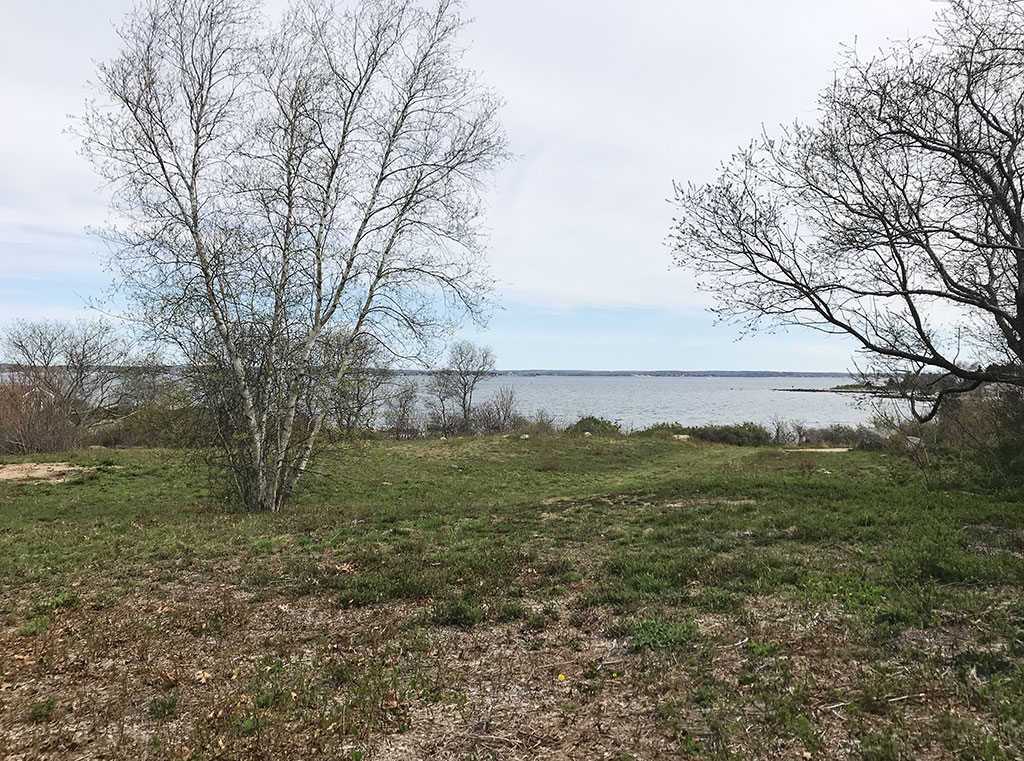 View of F.I. Sound from Chocomount Cove Sanctuary, May 2018

In 2017 the Museum’s Land Trust was extremely fortunate to acquire the land of the new “Chocomount Cove Sanctuary” through the generosity of the C.V. Ferguson Family. This exceptional five-acre parcel extends from the East End main road to Fishers Island Sound. It is comprised of two potential building lots (FIDCO Lots 19-4 and 19-9A), which will now be held in their natural state in perpetuity.

The property includes a coastal grassland and extensive frontage on the north side of the island overlooking Chocomount Cove. It provides an important wildlife corridor and walking trail connection from the Sound to the trails in the expansive Chocomount Sanctuary south of the main road. This trail system now makes it possible to walk off-pavement from the shed at the Driving Range to Chocomount Beach, across the main road to Fishers Island Sound, and back through highly diverse habitats. A sign identifying this new Sanctuary will soon be placed at the trailhead, which will be roughly opposite Bull Rock. The new Sanctuary and its trails will be shown on a forthcoming updated map of Land Trust property trails.

With respect to stewardship, Land Trust properties continue to require maintenance and upkeep. Many volunteers, coordinated by Scott Reid, maintain and clear the extensive trail system. As noted in the April issue of the Fog Horn, controlled rotational burning of our native grasslands is important to maintain diversity of habitat; the Museum is grateful to the Fire Department and additional volunteers for conducting a very effective controlled burn of the southern portion of Middle Farms Flats this spring, despite persistent rainy weather. Except where standing water prevented mowing, saplings that survived the burn were mowed to ground level before migratory birds arrived, so we hope that native warm-season grasses will flourish in this area without major attention for the next few years. 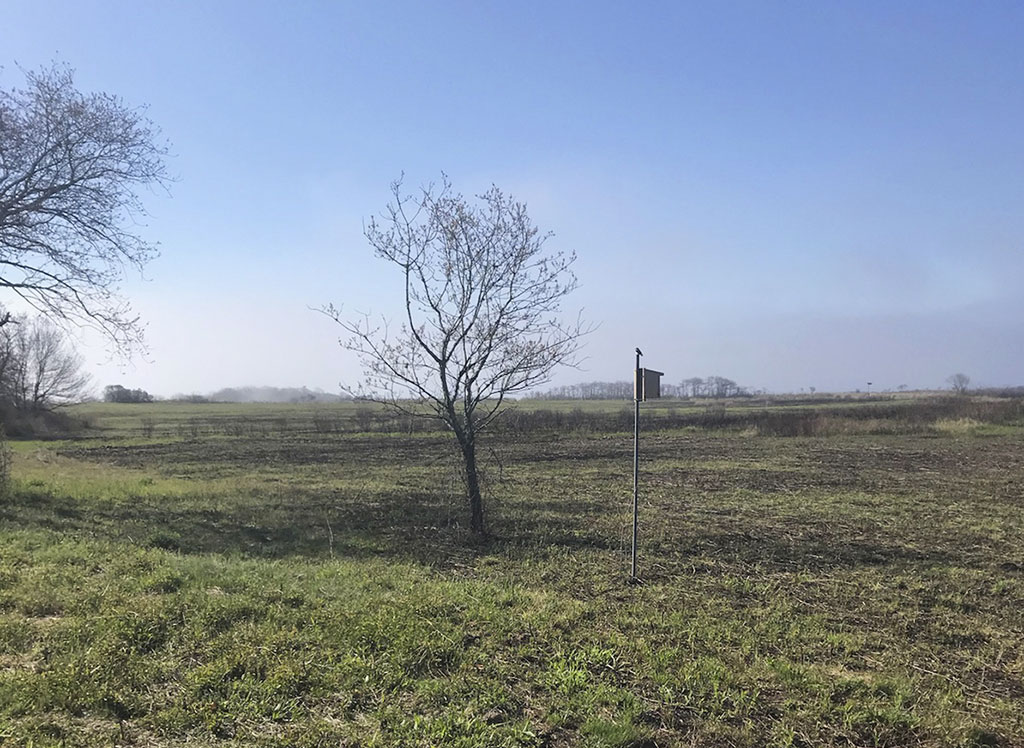 The Land Trust relies on our native seed bank of warmseason grasses; we have not introduced seed from commercial sources. Unfortunately, invasive species still plague our sanctuaries, along with other areas of the Island. The Museum faces special challenges in the Middle Farms area, much of which is in the “Primary Watershed Protection Zone,” where the use of herbicides is prohibited. We have attempted, with limited success, to control dense patches of black swallow-wort by using clear plastic to deprive them of water. We plan to experiment with this and other “passive” control techniques on the exotic ornamental grasses that have rapidly spread along the Middle Farms Road. 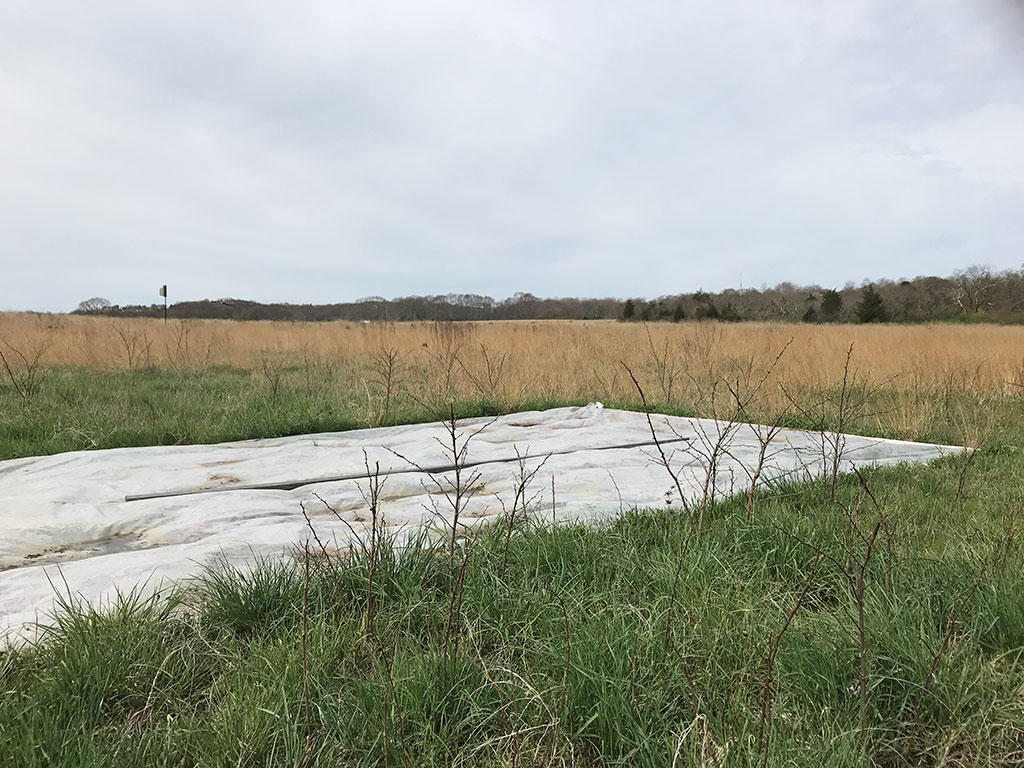 Despite these challenges, we have made progress. Major invasive vegetation clearing and planting of native species will continue in the Sanctuary behind the Museum and on Clay Point Road. We have removed many invasive plants from the Isabella Road grasslands. Most importantly, there is an increasing awareness among Island residents that our remaining natural areas are critical to the Island as we know it. If we wish to continue to enjoy this land, it must be protected. We have had significant land donations over the last few years. Volunteer efforts have been impressive, and new sources of funds have become available to support this vital conservation work. Even as development continues, we hope that this increased awareness will lead to additional conservation efforts in the coming years.